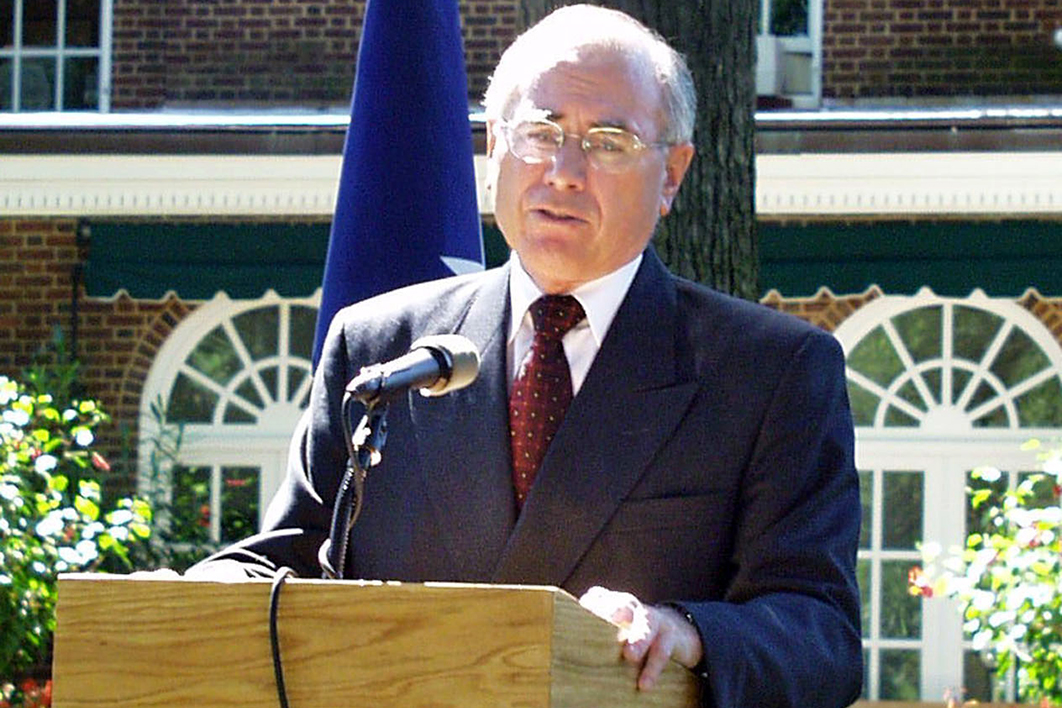 The question was simple; the answer anodyne; the implications to this day profound, especially with the Taliban back in control in Afghanistan.

This is a story of 9/12, not 9/11, but sometimes the response to an act of murder and aggression can be just as telling as the act itself, and every bit as pertinent to the present.

Howard was in Washington on 11 September 2001. He’d celebrated the fiftieth anniversary of ANZUS, hosted a barbecue for senior Bush administration officials at the residence of Australian ambassador Michael Thawley, met Rupert Murdoch for a private dinner and was about to address a joint sitting of Congress. As the ABC’s political correspondent I was part of the press pack.

The prime minister’s visit coincided with the Tampa crisis. Four hundred and thirty-three asylum seekers had been rescued in late August by the Norwegian freighter MV Tampa, refused permission to be offloaded on Christmas Island, and transferred at gunpoint to HMAS Manoora, which was sailing through the Timor Sea on a voyage its commander, at that stage, knew not where.

Australia had yet to secure permission from Nauru to land the unfortunate asylum seekers who were the first victims of what became the Pacific Solution. Most of them were Afghan Hazaras, members of a minority fleeing persecution by Afghanistan’s Taliban regime, up to and including rape and murder.

Immediately after the 9/11 attack, Howard offered any assistance Australia could provide to help punish the perpetrators. Invoking ANZUS would come later. President George W. Bush demanded the Taliban give up Osama bin Laden and his al Qaeda foot soldiers. The Taliban refused and the United States set about building a coalition to support an invasion of Afghanistan.

In the shell-shocked hours after the attacks, I wondered whether this lethal obscenity changed the status of the Tampa asylum seekers. They were Hazara, persecuted by the Taliban who were now Australia’s enemy. Did not the old cliché “My enemy’s enemy is my friend” apply, I wondered.

After being whisked to the basement of the Australian embassy and then spending a night at the ambassador’s residence, the prime minister emerged on 12 September for a late-morning media conference under the spreading limbs of the mansion’s autumn oaks, before making an early return to Australia. Amid the questioning, I asked him whether the fact we had offered the United States whatever assistance it needed meant Australia’s attitude to the Tampa’s passengers would change. Were they deserving of our protection because they were victims of people who were now our enemy?

After a bit of backing and filling, Mr Howard responded that it was not a matter he was prepared to contemplate at that moment. Meanwhile, the Manoora was sailing through the Torres Strait towards Nauru. When it eventually reached its destination, most of the Hazaras were put ashore, with another 130 destined for New Zealand.

Ninety-two of the people set down in Nauru were eventually given temporary protection visas. Twenty years later, in the wake of the “forever” war, around 4300 Afghans live in similar limbo in Australia, not quite assured of permanent residency, let alone citizenship.

And now, of course, a sizeable number of the hundreds of Afghans who worked as interpreters, guards and the like for the Australian military, Australian diplomats and Australian aid projects have been left behind, along with their families, because of the procrastination surrounding the operation to rescue them.

According to the UN refugee agency, more than 3.5 million Afghans are internally displaced — one tenth of the population — and the number is rising. Some of them, including Afghans who worked for Australia, and their families, have already made their way into Pakistan. A fortunate few have been airlifted from Islamabad; many more have been left behind.

The Hazaras on the Tampa had been fleeing the last Taliban regime; the early behaviour of the Taliban 2.0 suggests time has not tempered its murderous behaviour. Just as happened two decades ago, tens of thousands of Hazaras and other vulnerable Afghans are likely to be on the road seeking a better life, perhaps in Australia.

Some could end up in Indonesia looking for a boat to get here, just as their predecessors did, including Afghans who have risked life and limb for us over the past twenty years. But Scott Morrison insists that no Afghans, not even those with visas who got left behind in the chaos, will be allowed into Australia if they arrive by boat.

In 1975, Gough Whitlam was rightly excoriated by Malcolm Fraser and the Coalition for refusing to assist Vietnamese people who worked for Australia to escape Saigon. As prime minister, Fraser set out to achieve and won bipartisan support for the settlement of Vietnamese fleeing the communist regime.

Hundreds of the Afghans and their families who worked for Australia weren’t fortunate enough to run the gauntlet to safety in Kabul or to make it to Islamabad in time to be rescued.

Should our government be throwing resources at rescuing them from their peril in Afghanistan and Pakistan after what they did for us, or should it leave them to fend for themselves, increasing the likelihood that some of them will end up in Indonesia seeking passage to Australia on a leaky boat?

Does Morrison really want to find himself in the same boat as Whitlam? •

Jim Middleton was the ABC’s chief political correspondent from 1988 to 2007.