CINEMA | More from the Sydney Film Festival with Sylvia Lawson 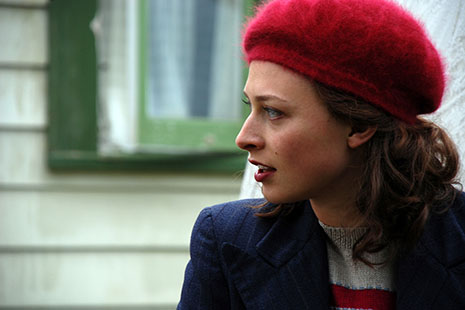 Chelsie Preston-Crayford as Tui in Gaylene Preston’s Home by Christmas.

THE SIZE of the Sydney Film Festival – I counted 129 main programs, plus talk sessions and significant short films run as supports – isn’t so much a problem for the now massive organisation, which seems to thrive on its own size and complexity. The problem is for the population of cinephiles who want to know their movies as they know their books and music, and take them in at some sort of reasonable pace. The festival is trying to be all things to all kinds of audience, and to pack into less than two weeks a stream of films that might well be paced out over a year. A lot of the time there are three concurrent sessions, sometimes four, with awkward overlaps; if your preferred movies take you from George Street to Circular Quay, you need a bit more than five minutes in between. Navigating the program becomes a tantalising business, even when – as was usually the case – most films had two screenings each.

This high-energy event would still be enjoyable at half the size; and at times in smaller cities, a festival program involving only two venues, and contained inside a single week, can be equally convivial and elating. The Sydney festival has expanded to this degree largely because Sydney has no real cinematheque, and (though the Chauvel tries) no continuing outlet for non-commercial exhibition; the festival is, in a sense, filling a cavernous hole. (Melbourne has the Centre for the Moving Image, Canberra the programs at the National Film and Sound Archive as well as screenings in the various embassies and the National Library; Brisbane now has its active cinematheque within the Gallery of Modern Art.)

Thus, committing days and weekends, you will see a fraction of the program, and will be in no position to generalise about its scope or quality. You will hear about numerous thrilling masterpieces from your friends who kept on picking the ones in the other venues. Many of these, fortunately, will reach the cinema circuits, TV or at least DVD. Look for Michael Cordell’s Three Boys Dreaming, which tracks Aboriginal teenagers on their paths toward football excellence; Claire McCarthy’s The Waiting City, woven through and around an adoption story in Kolkata; Nénette, a wonderful meditation by Nicolas Philibert (who made To Be and to Have) on an elderly orangutan watching the people watching her, in the monkey-house of Jardin des Plantes in Paris. Georgia Wallace-Crabbe’s New Beijing: Reinventing a City tracks demolition and loss in the course of a vast construction boom; No One Knows About Persian Cats most seductively explores the underground music scene in Teheran, blues, rap and rock and all. You have to blink at that title, and remember cats in jazz lingo.

Festival audiences are adventurers; they’re admirably eager to get out of comfort zones and learn things about, for instance, Iran that you’d never get from press or broadcast news. Persian Cats made one path; another, darker one was offered by a stunning drama, Women Without Men (directed by Shirin Neshat with Shoja Azari). In 1953, four women are followed along their paths of near-impossible resistance to the patriarchal order, while their country’s secular and democratic activists rally to keep Mohammad Mossadegh in power. They can only lose; Britain and the CIA are busy undermining Mossadegh’s secular and reformist government, which has nationalised the country’s oil industry (and so undermined the Anglo-Iranian Oil Company, forerunner of BP). Mossadegh, who had promoted the rights of women, is toppled; Iran once more loses its independence from the west and a path to secular democracy. Feminist struggles will continue under great difficulties; personal fates and political worlds are shown to be enmeshed. If audience desire is thwarted at the end, the important residue has to do with a country of which we hear all the time, while knowing much too little of its history. Shirin Neshat, who sent a statement connecting the struggles of 1953 with today’s resistance to Ahmadinejad, works from outside her country. Her film, a European co-production with French, German and Austrian participation, should be shown as widely as possible.

Sometimes one hears people wondering wistfully why New Zealand films are often stronger than Australia’s. I leave the question open, while strongly commending Gaylene Preston’s excellent Home by Christmas. The main actor is, however, one of our boys; Tony Barry gives a wonderful performance as the director’s father. He, with Chelsie Preston-Crayford as his wife, Tui, and others speak and play out the wartime memories Preston gathered and recorded from her parents before their deaths. If you take a hard line on the boundary between history and fiction, this one is a challenge; if however you recognise the deep entanglements of history and memory, it’s a hugely satisfying work. One of my own prejudices is a hostility to re-enactment; generally, I’d rather see an image of a tattered document or cracked photograph than watch (say) Alan Bates as Churchill. But Home by Christmas plays that game and wins. This one too should get around.

There were scores of other rewards. Plunging into the cinematic labyrinth, people pursue their special desires. We are living through an Australian moment when the political noise has grown loud and clamorous (in the coffee breaks I heard people worrying about refugees, about the looming federal election, and arguing over David Marr’s ill-timed essay on the prime minister). So the festival’s strong political dimension was hugely successful; the documentaries were packed out, and if any one of them dominated discussion in the queues, it was the generous, wide-ranging essay by Judith Erhlich and others on the story of Daniel Ellsberg and the Pentagon papers, The Most Dangerous Man in America. This one is moving soon to city screens, with a DVD promised by October. As a lively and elegant reflection on recent history, with a handsome hero who changes his mind in a progressive direction, it’s not to be missed.

In the framework set by such a film, fiction and drama can seem like mere distractions. Not, however, in their rare moments of absolute splendour. We were very lucky to see the restored print, from Martin Scorsese’s Film Foundation, of Luchino Visconti’s 1954 masterpiece, Senso. Visconti (1906–1976) was as much a director of opera as of film; all his films are grandly operatic (even those of his supposedly neo-realist early period), and they get away with it. Senso is high melodrama set in Austrian-occupied Venice, in the fraught time before the Risorgimento; Garibaldi is fighting in the distance. The lovers are on opposite sides, and the plot is a thick network of betrayals. Alida Valli plays the contessa to the hilt; Farley Granger makes a most believable cad; the work begins with Il Trovatore in a real opera house, and stays on that level of visual luxury. How can we now think about the masterpieces of more than half a century ago, with all their high certainty of responsive audiences? It’s the kind of question a film festival, with its transient but intensely concerned community, is well placed to open up.

The last day brought a very particular gift: in collaboration with the National Film and Sound Archive, a session on the continuing search for lost Australian films, with special concern here for Cecil Holmes’s Captain Thunderbolt (1953). This latter-day bushranger tale can be seen only in a washed-out 16mm version; but a vivid 35mm promotion trailer survives, as evidence both of Holmes’s vigorous directing and of the legendary Ross Wood’s brilliant camerawork. Holmes (1921–94) made many distinguished institutional documentaries, but only one other feature, Three in One (1957), a trio of socially angled stories which won distinction in overseas festivals, but could never get adequate airing in Australia. The film scholar Graham Shirley screened one of those stories, The City, and some traces of Thunderbolt. He also gave some of Cecil Holmes’s story; there were people there who had known him, and the chapters in Australian film history in which he figured, but there were others who might not have heard of him before. Holmes never gave up; he planned several feature films, but – largely because of the well-known obstacles to production in this country through his period, and also because of his own political record – he never got his major projects under way, and that was everyone’s loss.

As with Indonesia Calling: Joris Ivens in Australia, discussed last week, that session opened a kind of trapdoor. There’s all that cultural history hidden under the floorboards, stories and film-work from the forgotten Australian left.

Although he’s largely unknown outside the ACT, Jon Stanhope is one of Australia’s most intriguing political figures, writes Norman Abjorensen

The most electorally successful of the present generation of party leaders in Australia, Jon Stanhope. Mark Gallagher 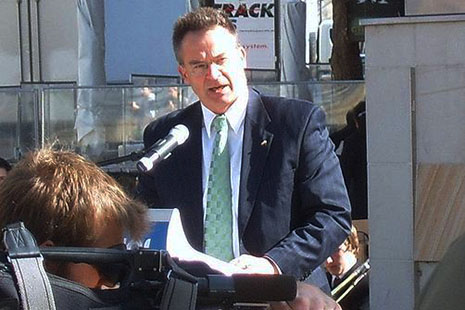 The most electorally successful of the present generation of party leaders in Australia, Jon Stanhope. Mark Gallagher