With the government and the opposition treading water, Brian Toohey looks at alternative ways forward 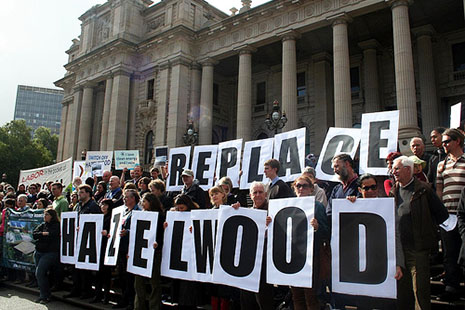 Above: Protesters on the steps of Victorian Parliament in May this year calling for the closure of the Hazelwood coal-fired power station by 2012.
Photo: Takver/ Flickr

IT’S NOW clear that neither side of politics is prepared to use the polluter-pays principle to make serious cuts in greenhouse gas emissions. Nor do either Labor or the Coalition show much sign of adopting viable alternatives for reducing emissions of greenhouse gases. The only difference is that Tony Abbott says outright that he will never make it more expensive to keep polluting while Julia Gillard gives the impression that she would like to do something as long as nobody objects.

Gillard says she supports putting a “price on carbon” when there is a “deep and lasting community consensus.” Unless she takes a lead, this might never happen. What she has said to date is no more than a defence of the indefinite delay that she strongly advocated in Kevin Rudd’s mini-cabinet back in April. Labor’s standing in the opinion polls dropped sharply after Rudd announced the decision not to go ahead with the government’s Carbon Pollution Reduction Scheme, which had been due to start on 1 July 2011 after a previous deferral from 1 July this year.

The government’s new position was that it would review its decision in late 2012, when it will check whether the major overseas polluting countries were taking enough action and whether a satisfactory international agreement had been reached to monitor compliance with promised emissions cuts. Any Australian government wanting to delay action into the indefinite future could easily claim that the answer to each or either of the questions is “no.”

With the polls still flat in June, key Labor figures approached Gillard to take over as prime minister, apparently oblivious to the irony that Rudd had never recovered electorally from the backflip on climate change policy that Gillard had championed. Apart from announcing at her first prime ministerial press conference that putting a price on carbon would have to wait, Gillard said, “It is my intention to lead a government that does more to harness the wind and the sun and the new emerging technologies.” With the government doing so little, it shouldn’t be hard to do more.

But Gillard is only expected to shuffle the existing funding for renewables, which averages about $500 million to $600 million a year. This compares to the $3 billion a year that Professor Ross Garnaut recommended in a report Rudd commissioned. In contrast, China will spend around A$40 billion on clean energy in 2010, and the South Korean government will spend almost A$100 billion between 2009 and 2013.

Although Gillard is committed to returning the budget to surplus in 2012–13, more spending on low-emissions technologies would be possible if this were really a priority. None of the expected $8 billion a year in revenue from the minerals resource rent tax, or MRRT, for example, has been allocated to tackling climate change. Part of the revenue will go to funding a small cut in company tax; the biggest slice will be used to pay for the tax concessions involved in lifting compulsory superannuation contributions from 9 per cent of salaries to 12 per cent so that people can consume more in their old age. Government sources estimate that the added cost of the concessions will be about $8 billion a year – the same as the entire annual revenue from the MRRT.

Before the election, the prime minister is expected to announce new programs to promote greater energy efficiency. This is fine, but putting a price on emissions would give an added incentive to save on energy. Ultimately, big emissions cuts require a switch from “dirty” to clean sources of transport fuel and electricity, as well as a move to cleaner industrial processes for making products such as aluminium, steel and cement. Apart from basic research, money is needed to fund demonstration plants and deploy new technologies to allow costs to fall via the well-known process of “learning by doing.”

Eventually, most of this money will have to come from the private sector. But the Garnaut report explained why the high risks involved mean that even large corporations are reluctant to spend in the early stages, which is why he recommended allocating $3 billion a year from the Carbon Pollution Reduction Scheme for government spending in this area.

Yet the Rudd government refused to spend a cent of the revenue from selling emissions trading permits. Instead, the government’s white paper on climate change assumed that the cost of buying a pollution permit under the Carbon Pollution Reduction Scheme would give polluters enough incentive to invest in clean technology. The trouble was that the government decided to spend all the scheme’s revenue on compensation for big polluters and households in order to soften the impact of a permit price that was expected to start at about $26 a tonne of CO2.

These subsidies would greatly reduce any incentive for big emitters to invest in clean technology. For example, the subsidies would cut the price of an emissions permit for the biggest industrial polluters to a barely noticeable $1.40 a tonne. The dirtiest electricity generators – those burning brown coal – were promised $8 billion in free permits on the perverse condition that they keep polluting rather than shut down. Because the price of an emissions permit was fully offset by a cut in the fuel excise, there was no incentive at all to switch from petrol or diesel.

LABOR’s determination to spend all the revenue from the Carbon Pollution Reduction Scheme on counterproductive compensation is a good reason to hope that Gillard does not resurrect the scheme if she ever gets around to “putting a price on carbon.” Even without compensation, the price volatility inherent in such “cap and trade” schemes makes it extremely difficult for businesses to work out if it makes financial sense to invest in clean technology.

These schemes don’t put a price on carbon – that’s been done in normal markets for thousands of years. Instead, they put a price on synthetic financial products called pollution permits by trading them in artificial markets established by governments. As the experience of the European emissions trading scheme demonstrates, the price jumps all over the place. The global financial crisis has also shown that these sorts of derivative financial products can generate huge problems.

If governments use a tax or levy to put a price on emissions, then business and consumers can be certain of how much has to be paid. One objection is that a tax can’t guarantee by how much emissions will be cut – unlike government regulation, which would have imposed a cap on emissions in the Carbon Pollution Reduction Scheme. But most sensible proposals involve a hybrid system in which regulation supplements a tax or levy.

Examples include mandated emissions controls on vehicles, as already occurs in Europe, the United States, Japan and South Korea. Building codes can mandate energy efficiency standards. Regulation can establish binding renewable energy targets for electricity generation and so on. If there is a shortfall in any desired level of cuts, this can be remedied by buying overseas emissions offsets or credits (as was proposed in the government’s emissions trading scheme).

But this still leaves the problem that the Australian political system won’t let the price on emissions – whether imposed by a tax or by trading pollution permits – go high enough to provide serious incentives to switch to clean technologies and much more efficient forms of energy consumption. Before the price signals could work, the politicians have shown that they will hand out billions of dollars in countervailing compensation. The initial compensation in the emissions trading scheme was a thumping $13 billion a year for an expected initial permit price of about $26 a tonne.

One solution could be to start slowly with a levy set at around $2.50 per tonne of emissions, increasing by $2.50 a year, and reaching $25 a tonne after ten years. The levy’s price could then be revised. The gradual change would give polluters and households ample time to adjust without any grounds for compensation.

Based on credible calculations by Treasury, an escalating levy of $2.50 a tonne would only add 0.1 per cent to the Consumer Price Index each year. The main impact on households would be a 40 cents weekly increase in the price of electricity. If political leaders explained the need for action on global warming, there is no reason why most Australians would not accept this minor impost; most make a bigger sacrifice when asked to cut water consumption during droughts. In any event, pensioners would still be compensated by the normal indexation of their incomes to the CPI.

With no need for compensation, all the initial revenue could be allocated to developing and deploying the clean technology essential to cutting emissions in the most cost-efficient manner. A $2.50 levy, escalating by $2.50 a year, would raise about $1.3 billion in the first year, $2.6 billion the second and so on. (The increase would gradually decline once cuts in overall emissions were achieved.)

This option would ensure that funding would soon be available for Garnaut’s recommended spending of $3 billion a year. Perhaps higher levels of funding to help deploy new technology might be considered desirable if the community wanted a faster transition to a low-emissions economy. Before long, however, billions of dollars would be available for general tax cuts, spending on health, education, transport or other priorities. But the escalating rate for the levy on emissions should not be cut while a price incentive is needed to encourage the move away from heavily polluting industrial processes and fuels.

Policy makers would need to ensure that governments don’t give the bulk of the funding to clean technologies with popular appeal or good lobbyists. The Australia Institute suggests that the funding be distributed by an auction, with the winning bids going to those firms offering the biggest cuts in emissions per dollar of assistance. All bidders would have to commit a large proportion of their own money to the total cost of a project.

Another option would be to give firms that develop and deploy clean technology a cash rebate on the tax value of their expenditure in the year that it occurs, rather than wait for deductions to accumulate until the project earns a profit. Alternatively, the US policy of offering government guarantees on loans for the rollout of low-emissions projects could be adopted here.

The Greens are pushing another idea widely used in Europe. This involves “feed-in” tariffs to encourage commercial-scale plants using green technology to supply electricity to the grid, rather than confine this policy to households with roof top solar panels. The tariff, usually reduced over time, is set at a higher rate than for electricity generated from high-emitting sources such as coal.

Whatever happens, no meaningful Australian climate policy can be based on doing nothing more than is already in place, or only minor additional action that Labor and the Coalition might propose before the election. •

Large questions about a big corporation

“If it stays humble and moves with the swiftness of a fox, it will be difficult to catch.” Jock Given reviews Ken Auletta’s Googled

Building 43 at Google HQ, where founders Larry Page and Sergey Brin have their offices. Trey Ratcliff/Flickr 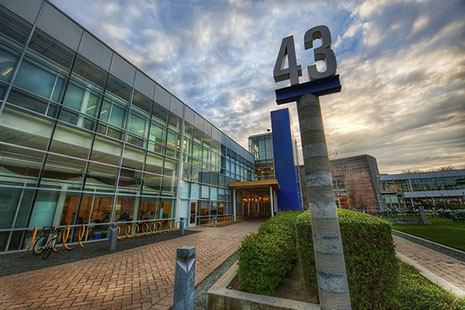 Building 43 at Google HQ, where founders Larry Page and Sergey Brin have their offices. Trey Ratcliff/Flickr