As scrutiny of the defence forces recedes, it’s starting to look like business as usual, writes Geoffrey Barker 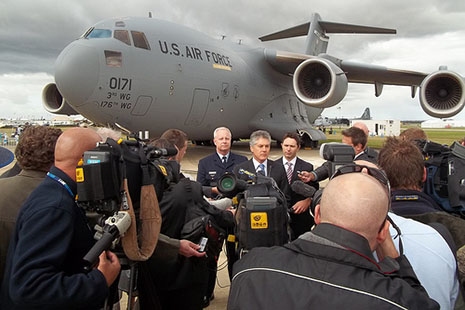 PROSPECTS are vanishing for serious reform of the Australian Defence Force culture of bullying, brutality and degradation. Little, if anything, seems likely to change substantially following two weeks of grubby disclosures, political–military breast-beating and the establishment of multiple inquiries.

Doubtless there will be gestures to placate public and political concern over the notorious culture exposed once again by the incident involving the sexual degradation of an eighteen-year-old female cadet at the Australian Defence Force Academy. But the military chiefs have managed the issue with such consummate skill that Defence Minister Stephen Smith has virtually no prospect of achieving root-and-branch reform of how defence force recruits, both officer cadets and enlisted troops, are treated in Australian Defence Force training establishments.

Despite their professed dismay at the latest disclosures, and their declared commitment to gender equity and non-discrimination, it is hard to avoid the conclusion that Defence chiefs accept as an article of faith that the entrenched culture of violence is necessary to produce a warrior class able to withstand the rigours of combat. But they have never explained how bullying, bastardisation and even sexual torture contribute to the professional formation of officers or enlisted personnel. Or how and why a proportion of sadists and tormentors are recruited and retained within the forces to do grievous damage to some young recruits and to the military’s reputation.

Even the Defence Force chief, Air Chief Marshall Angus Houston, a man of the highest personal and professional standards, has portrayed the Skype incident as isolated behaviour by teenagers who had been in the ADF for only ten weeks. In fact, over many years, sexual misconduct, intimidation and violence have been recurrent behaviour in the forces, often involving senior and long-serving personnel.

The army chief, Major General Ken Gillespie, also played down the disclosures by saying that the army would be judged by its performance in combat in places like Afghanistan. General Gillespie is deluding himself if he thinks the army will not also be judged by the way it behaves at home, especially in elite training establishments like ADFA and Duntroon.

It is instructive, if depressing, to see how easily the military chiefs have moved to block real cultural change in the ADF – and how they were assisted by Stephen Smith’s angry initial response to the Skype incident and by the limited attention span of the national media which was quickly diverted by “positive” defence news served up to distract reporters.

Perhaps the last glimmer of hope for change emerged last week when Smith said the Commonwealth might be legally liable for abuses committed over many years and spoke of “the use of lawyers or retired judges” to look at individual cases. The prospect of substantial Commonwealth compensation payouts to abused former defence force personnel might help to persuade defence chiefs that change is needed to protect their own career interests.

But Smith, who has acted with the best intentions, has been outmanoeuvred by the chiefs. Smith entered the affair angry over earlier incidents which had persuaded him that Defence was being less than frank in its advice to him. The Skype incident outraged him and confirmed his suspicions, prompting him to demand the sacking of the ADFA commandant, Commodore Bruce Kafer.

Here the defence chiefs had their first victory: they acquiesced in Smith’s judgement that Commodore Kafer had seriously erred in his handling of the Skype incident, but merely sent him on paid leave pending investigations. Then they acquiesced in no less than six separate inquiries, thereby ensuring that the incident and other issues will be consigned to, and managed in, backrooms for months.

The inquiries will probe, among other things, the Skype incident, the treatment of women and the use of alcohol and social media in the ADF. Reports will eventually be published, possibly to the momentary embarrassment of Defence. Some new rules will be drafted and warnings will be issued – and, if past events are any guide, promptly forgotten.

At the same time, relying on the short media attention span, Defence refloated an old proposal to allow women to serve in front-line combat roles. The media leapt gratefully on this stale information. And Defence kept the stories coming to satisfy the media’s voracious appetite for the new. They included reports of posthumous decorations for first and second world war personnel, including a possible VC for John Simpson Kirkpatrick, the man with the donkey at Gallipoli. There was also a story about the capture of a Taliban district commander by Australian troops in Afghanistan, a belated report of an Australian battle casualty in Afghanistan, and news of possible delays in the delivery new F-35 joint strike fighter aircraft.

Despite Smith’s disclosure that he had received many faxes, emails and phone calls detailing past abuses, military leaders maintained stolid silence about complaints from former personnel and families. They merely said that a lot of investigative work would have to be done. They were also silent about a Facebook hate page set up by defence personnel to vilify gay defence force members, apart from saying that the matter was being investigated.

Defence chiefs also maintained that cadets could come forward with complaints of mistreatment and receive a fair hearing. In fact the pressure to suffer in silence or be subjected to perhaps worse abuse is a powerful incentive for cadets to say nothing. The cadet honour system at Duntroon forbids lying. But truth will not emerge until senior officers start to ask cadets the right questions about their treatment. No one, it seems, wants those questions to be asked.

Throughout this sorry affair the military chiefs have been stoutly defended by the small community-based Australia Defence Association, run by former Lieutenant Colonel Neil James, who has maintained a drumbeat of criticism against Stephen Smith. James has sought to portray the cadets involved in the Skype incidents as being “as fit as Mallee bulls” and the woman involved as “a little bit of a troubled lass” who should be taken away from ADFA for a semester.

This absurdly reductionist analysis was unworthy of an organisation that seeks to be taken seriously on defence issues. But it reflects unerringly at least part of the Defence mindset in what is now an ongoing crisis in Australian civil–military relations. • 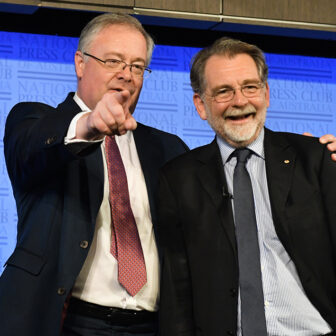 National Affairs Signing up Hamish McDonald 19 September 2021 Has Australia committed itself to going to war over Taiwan? (And other awkward questions about this week’s submarine switch)
Close