Xi Jinping has made clear the Party’s views about the role of artists, writes Linda Jaivin. But it’s unclear what they will mean in practice 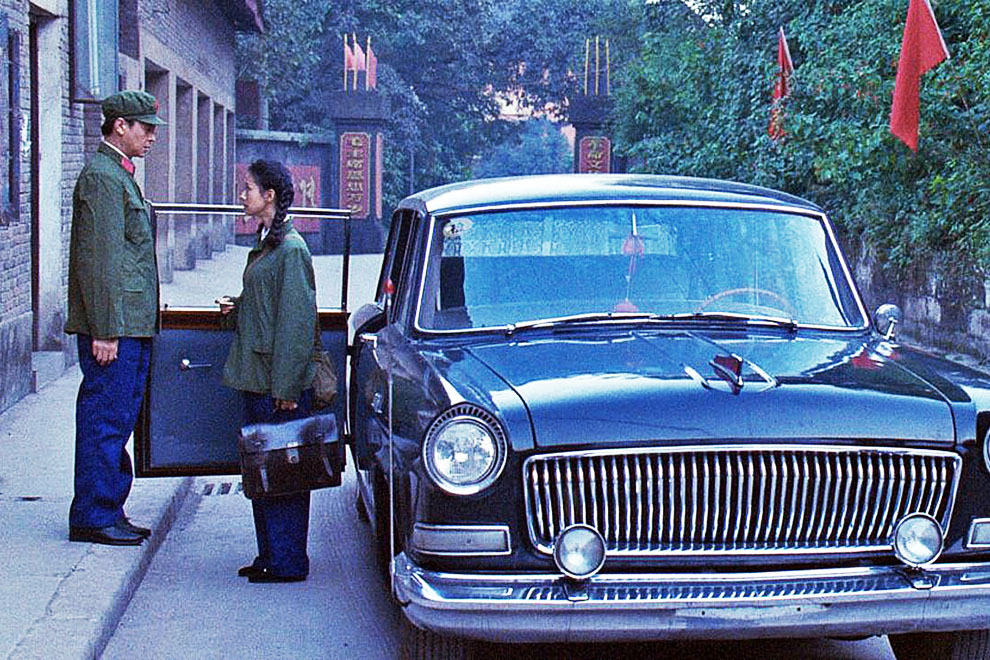 Boundary-pushing from within: Cui Jian’s Blue Sky Bones deals with the Cultural Revolution, sexuality and a corrupt media.

“I am so excited that I can’t sleep… The spring for art and literature has truly come!” The much-loved Chinese actor Zhao Benshan is famous for his comedy. But when the Global Times quoted his ecstatic response to president Xi Jinping’s speech about the arts in October last year, there was no sign he was joking.

Who would dare? Xi’s speech has been likened to Mao Zedong’s “Talks at the Yan’an Forum on Literature and Art” of 1942, in which Mao demanded that art serve the Party and the people and help vanquish the enemy. Xi did the same, extolling the Stalinist idea that writers are engineers of human souls; but he also talked about market influences, popular culture and other contemporary phenomena. He called for Chinese artists to create “socialist culture and art” that is “artistically outstanding and morally inspiring,” and stressed that art must serve “correct” views of history, nationality and culture. It must feature, he said, “positive energy.”

At the forum, Xi praised two young bloggers – Zhou Xiaoping (over eleven million views) and Hua Qianfang (over 87,000 fans on Weibo) – for their “positive energy.” Among Zhou’s writings is a blog post from June 2013 called “Please Don’t Be Unworthy of This Age.” A paragraph towards the end of the piece gives some idea of what “positive energy” means:

I, Zhou Xiaoping, do not deny that China has corrupt officials, prison guards, bad people, bullies and crazy people. In the same way I wouldn’t deny that a beautiful woman has thickened skin on the soles of her feet, snot, bowel movements, bacteria or germs, inflammation of the mouth, swollen lymph glands, or pancreatic juices (what’s more, these things make up no small proportion). But when I see a beautiful woman I still feel delight in my heart and eyes, and I still hope that I can hold her in my arms. If at the moment, you are standing to one side nattering on, saying: “You’ve been brainwashed, this beautiful woman is made of the skin on her feet, snot, bowel movements, germs and viruses, inflammation of the mouth, pancreatic juices, intestines, organs and lymph, it’s extremely disgusting, hurry and wake up.” I honestly don’t know whether I’m blind or you’re mad. If you don’t do anything but natter, at most I’ll just smile. But if one day, someone makes a move to eliminate this “harmful beauty,” I will certainly not stand idly by. The reason is very simple: if I failed to act, would I be a man? A man’s greatest virtue is that of guarding and protecting.

Zhao Benshan was only one of a number of major state-supported artists, including the veteran painter Fan Zeng, who lavished praise on Xi’s speech – much as state-supported artists have done since 1942, whether out of genuine enthusiasm or simply because they are mindful of the price of opposition. (The writer Wang Shiwei, the first to pay the ultimate price for dissent, was expelled from the Party in 1942 and beheaded in 1947.)

Xi has expressed specific as well as general views on the arts. He has revealed, for instance, that he hates the “weird” architecture that has come to define China’s modernising cities. Weird architecture presumably includes the work of figures like Zaha Hadid and Ma Yansong (of MAD Architects) as well as numerous high-concept, low-value knockoffs and buildings designed to look like lotuses, teapots, coins and even a piano and violin. “No more,” said Xi. It’s uncertain what this diktat will mean in practice for projects already contracted or under way – or what the speech as a whole will mean for art, literature and film that is already out there but doesn’t sing along with what the Chinese media and propaganda arms have long promoted as “main melody” art.

After all, China has been home since the 1980s to a flourishing counterculture of independent visual artists, film-makers and writers who support themselves outside the state system or use it cannily to pursue their careers. Many other artists who work within the system (in the sense that they must pass the censors) have nonetheless managed to make boundary-pushing works. Take, for example, the directorial debut of rock star Cui Jian, whose songs have been banned and unbanned over nearly thirty years. Blue Sky Bones, which deals with the Cultural Revolution, sexuality (including homosexuality) and a corrupt media, screened nationally in Chinese theatres from October 2014.

Or take Chen Qiufan’s first novel, The Waste Tide, which describes a dystopian near-future where, on an island built with e-waste off the Chinese coast, migrant workers battle capitalist elites and powerful local forces for control. The novel won Best Novel at China’s Nebula Awards in October 2013 and the Huadi Best Work of Science Fiction Award, sponsored by Guangzhou’s Yangcheng Evening News, in March 2014. The Waste Tide “paints China as a conflicted nation,” according to the Women of China website, “powerful enough to convince other countries to accept its ideologies, but not strong enough to pull its population out of poverty.”

Chen, who was born in 1981, obliquely addressed the question of Shared Destiny when he wrote that his generation encompasses Foxconn factory workers, princelings “who treat luxury as their birthright,” entrepreneurs pursuing dreams of wealth, and college graduates who must “compete ruthlessly for a single clerical position.” Yet, Chen observes, the Party persists in speaking as though the “People” all share a monolithic Chinese Dream. “Between the feeling of individual failure and the conspicuous display of national prosperity,” Chen writes, “lies an unbridgeable chasm.”

How the party-state will address political heresy in the domestic cultural sphere – including among “globalised” artists and writers and in imported popular culture – will become clear in the coming year. In the Mao era, and through much of the Deng era, the authorities accused creative artists whose work offended them of “counter-revolution,” “spiritual pollution,” “bourgeois liberalism” and other ideological crimes. In more recent times, the party-state has preferred criminal to political charges. These have the potential to smear artists’ reputations, especially within China itself, punish them financially through fines and tie them up in legal cases they can’t win.

When authorities detained the artist-activist Ai Weiwei from 2011, for instance, they charged him with tax evasion and put him under continuing surveillance. After the Australian-Chinese artist Guo Jian created a diorama of Tiananmen Square smothered in rotting meat to commemorate the twenty-fifth anniversary of the violent suppression of the 1989 protest movement, the authorities detained and then deported him on charges of visa fraud.

The consequences are generally more severe for artists with less clout. In November 2014, for example, the independent film-maker Shen Yongping, who had produced an eight-episode internet documentary about China’s constitutional governance (posted in April or May 2014 through Weibo), faced trial. During the filming, police had warned him that if he went ahead he would go to prison. What they have charged him with, however, is engaging in “illegal business activity.” (This came during the last week of October, when state media was singing the praises of the Fourth Plenum under Xi Jinping, with its stated focus on rule of law and constitutionalism.)

There is also a third way: in October, police detained thirteen artists in the Beijing “artists’ village” of Songzhuang on charges of “creating trouble.” All had indicated support on social media for the pro-democracy protesters in Hong Kong or were planning to attend a poetry reading in solidarity with the protests. (Human rights monitors have reported the arrest of dozens of mainland citizens who have indicated support for the Hong Kong protesters.) Reports in the foreign press at the end of October indicated that police were swarming through the once-relaxed village and many artists had closed their studios to outsiders.

The artists, for their part, can accept the Party’s leadership and reflect Xi’s guidance in the kind of art they produce. Or they can make the sort of art they consider meaningful and risk the consequences. Or they can attempt to hit “graze-edge balls,” named for a play in ping-pong in which the ball grazes the edge of the table – technically still “in” or legal and yet almost impossible to counter.

Or, if they have the means, they can send their art overseas. Chen Qiufan published the essay from which the earlier quotation was taken, translated by his fellow science fiction writer Ken Liu, on the science fiction and fantasy website Tor.com in May 2014. Writers Murong Xuecun, Yu Hua and Yan Lianke (a finalist in the 2013 Man Booker International Prize and, the following year, the first Chinese writer to win the Franz Kafka Prize) are among those who have increasingly turned to websites, journals and newspapers including the New York Times to publish essays that can’t appear at home.

Working remotely, Ai Weiwei created a giant, site-specific installation for the infamous former island penitentiary of Alcatraz, in San Francisco Bay. It includes a colourful dragon with Twitter-bird eyes, 175 Lego representations of prisoners of conscience from around the world and a dozen gleaming steel stools individually installed in one of the cells in Cell Block A. Into the cell are played songs and speeches of protest, including Martin Luther King’s 1967 anti–Vietnam War speech, music by the imprisoned Tibetan singer Lolo, and Hopi chants representing the Native Americans incarcerated in the nineteenth century for resisting assimilation.

Guo Jian, meanwhile, went to New York in the second half of 2014 to collaborate with the American artist and Iraq war veteran Marcus Eriksen on an anti-war multimedia installation called Surrender. They asked people all over the world, especially soldiers in uniform, to send photographs of themselves with their hands up in surrender. Like Ai Weiwei’s Alcatraz work, it was a rather different vision of Shared Destiny from that of Big Daddy Xi. •

This extract is from the China Story Yearbook 2014: Shared Destiny, which will be launched by Andrew Leigh MP at Parliament House, Canberra on 24 November, 6–7 pm.

Linda Jaivin is an essayist, translator and novelist.