There’s a price to be paid if we wish to remain a liberal society, write Savitri Taylor and Brynna Rafferty-Brown 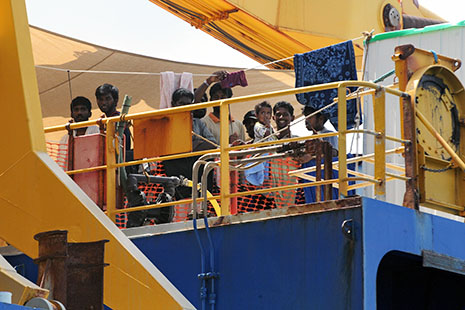 AUSTRALIA RIGHTLY regards itself as a liberal democracy. What distinguishes “liberal” democracies from “illiberal” ones is their adherence to the view that all individuals have fundamental moral rights, of which even a political majority cannot deprive them. The notion of universal human rights was in a real sense born of liberalism. Unfortunately, it is not always easy for a government to be true to liberal values in a democratic society. Sometimes, as the Rudd government is presently discovering, it can be extremely hard.

In the period 1 January to 27 October 2009, thirty-six boats carrying about 1800 asylum seekers have arrived in Australian waters without prior authorisation. As the Rudd government has been at pains to emphasise, this is a miniscule number when compared with the numbers of asylum seekers who have entered European countries without authorisation in the same period. Nevertheless, the Coalition parties have attempted to gain political mileage by arguing that Australia is experiencing a larger number of arrivals now than it did in the latter years of the Howard government because policy reforms instituted by the present government are operating as a “pull factor.”

The impression their rhetoric attempts to create is one of an “invasion” by the world’s dispossessed, attracted towards us by a perceived weakening in our determination to keep them out. The Liberal MP Wilson Tuckey has suggested that terrorists may be entering Australia in the guise of asylum seekers; David Johnston, a Liberal senator, characterised asylum seekers as potential disease carriers; and the West Australian Liberal premier Colin Barnett described them as potential criminals.

For the most part the opposition has avoided articulating exactly what it would do to address the concerns that it has raised, but the subtext is that the government has a responsibility to keep asylum seekers out of Australia using all measures physically available. After all, the Australian people should be able to “decide who comes to this country and the circumstances in which they come.” It is a message that resonates with the Australian public because it speaks to the democratic strand of our political tradition.

There are a couple of choices open to those who wish to prevent the opposition from gaining political traction. One is to assert that the concerns it has raised have no foundation in fact. But this would be misleading and a distortion of the more nuanced picture the Australian electorate has a right to know. Although there is a great deal of truth in the government’s claim that the recent upsurge in irregular asylum seeker arrivals is part of a worldwide phenomenon explicable by reference to events in source countries such as Afghanistan and Sri Lanka, there is also some truth to the opposition’s claim that Australia’s renewed reputation for respecting human rights is a “pull factor” for potential arrivals. Similarly, any denial that some unauthorised arrivals could possibly pose a threat to the security of the Australian community would simply be an attempt to keep inconvenient facts out of public discourse.

The more politically mature, albeit difficult, choice is to acknowledge that the dilemmas identified by the opposition are real, even if they are being overstated. At the same time, however, the Australian public needs to be reminded that there is a price to be paid if we wish to remain a liberal society. Namely, no matter how threatened we feel by unauthorised arrivals, some solutions are off the table not because they are ineffective (though they may also be that) but because they are inconsistent with liberal values. However effective it may have been as a deterrent, the arbitrary and indefinite detention to which past Australian governments (on both sides of politics) subjected unauthorised arrivals was inconsistent with liberal values. That is why the Rudd government made reforms to immigration detention policy and that is why, to its credit, it has continued to stand by those reforms.

What the Rudd government also did upon coming into office was to strengthen border control initiatives of previous governments which were consistent with liberal values. These initiatives had the long-term aim of eliminating the root causes of forced displacement, as well as the shorter-term aim of ameliorating the plight of displaced people in overburdened countries of first asylum so that they would have less incentive to engage in “secondary movement.” The government was, in short, on the right track, until it began to fear that the right track might lead it right back into opposition in 2010. The boat carrying seventy-eight asylum seekers (including five women and five children) that put out a distress call on 17 October 2009 was, in that sense, Kevin Rudd’s Tampa. The boat presented the government with a choice and the choice it made was the same one the Howard government made in relation to the Tampa, in essence if not in detail.

The boat in question was in international waters at the time it made a distress call to the Australian Maritime Safety Authority, or AMSA. Since the boat was in Indonesia’s internationally designated search and rescue area, AMSA relayed the call to the Indonesian authorities. As it turned out, the vessel best placed to respond to the distress call was the Australian navy vessel, HMAS Armidale. What the Armidale discovered on locating the boat was that it was unseaworthy. Accordingly, arrangements were made to transfer its passengers onto the Australian Customs ship, the Oceanic Viking.

The moment of choice came in determining what to do next. To discharge its international obligation to ensure safety of life at sea, Australia had only to arrange for the rescuees to disembark at the nearest port, which would have been an Indonesian port. But, as the Australian government would have been well aware, the situation also engaged Australia’s treaty and customary international law obligations not to return a person directly or indirectly to a place where they face a real risk of serious human rights violations. Why? Because the rescuees, who happened to be asylum seekers, had come within the effective control of agents of the Australian state.

As Sarah Hanson-Young, the Greens senator, pointed out in parliament on 19 October 2009, the most effectual way for the Australian government to ensure it fulfilled its international human rights obligations would have been to bring the asylum seekers to Australia, to determine any protection claims they presented, to allow those with valid claims to remain and to return those without such claims to their country of origin. The government chose instead to arrange a handover of the asylum seekers to the Indonesian authorities. In other words, it chose to place the fulfilment or otherwise of Australia’s already engaged human rights obligations within the control of a country that has chosen not to make all of the same international legal commitments in respect of asylum seekers that Australia has made.

It is debatable whether this “Indonesian solution” is more or less consistent with liberal values than the Howard government’s “Pacific solution.” The Pacific solution did at least have the merit of keeping the Australian government firmly in control of the fate of the asylum seekers. The criticisms that can properly be made of the Pacific solution are, first, that it involved Australia exploiting its superior bargaining power to shift a burden to Nauru and Papua New Guinea and, second, that it was implemented in a way that resulted in violations of the human rights of at least some of the asylum seekers concerned.

Asymmetry of bargaining power is not a concern in the negotiations presently taking place between Australia and Indonesia to intensify a process of cooperation initiated by the Howard government. It is more than likely that the outcome will be a win–win from the perspective of the two states involved. What is less certain is that the outcome will result in the better protection of the human rights of those whose fate is being negotiated. We have some reason to hope for the best because the attitude of both governments towards asylum seekers is relatively benign. But if there is one thing that history has taught us, it is not to trust the realisation of liberal values to the benign intentions of governments but rather to mechanisms that force transparency and accountability. •

Savitri Taylor is a Senior Lecturer and Brynna Rafferty-Brown a Research Officer in the School of Law at La Trobe University. Together with Sandra Gifford, Director of the La Trobe Refugee Research Centre, they are currently wrapping up a two-year ARC Linkage project entitled The Impact on the Human Rights of Asylum-Seekers and Host Communities of Australia's Border Control Cooperation with Indonesia and PNG.