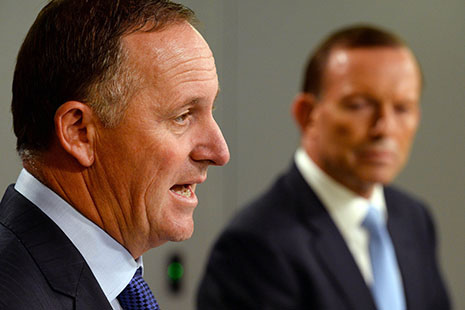 DURING the last two federal election campaigns the Coalition promised new measures to tackle long-term unemployment. That pledge has found its way into legislation that would create two new payments to encourage people to rejoin the workforce. Labor has largely supported the bill, which is currently before parliament, but the precedent it sets for New Zealanders living in Australia has inflamed opinion across the Tasman.

The first of the new payments is a Job Commitment Bonus. Job seekers aged eighteen to thirty who’ve been on benefits for twelve months or more will receive a tax-free payment of $2500 if they remain in “gainful work” (and off welfare) for at least a year. After two years, they’ll receive an additional bonus of $4000. The second – with its less catchy title, Relocation Assistance to Take Up a Job – replaces the existing Move 2 Work program and offers unemployed people payments of up to $6000 (more if they have dependent children) if they need to move house to find work.

Although Labor MPs supported the bill in the House of Representatives, they argued that, by failing to create jobs or increase skills, it doesn’t go to the heart of the youth unemployment problem. They were also concerned about the expanded penalties in the relocation scheme: anyone who quits a job “without a reasonable excuse” within six months of receiving a payment will be barred from receiving any benefits for twenty-six weeks. (Under the previous scheme the non-payment period was twelve weeks.) Overall, however, this is not a particularly contentious piece of law-making.

Why, then, is the prime minister of New Zealand being questioned about the bill in parliament in Wellington, and why has he directed diplomats at the New Zealand high commission in Canberra to register his government’s concerns with the Australian government?

At issue is the fact that the bill redefines what it means to be an “Australian resident” in an unprecedented and highly specific manner. As a result, New Zealanders are excluded from the new job commitment bonus, regardless of how long they have lived in Australia.

Here, a bit of history is required. New Zealanders enjoy the right to live and work indefinitely in Australia – a right that was formalised under the 1973 Trans-Tasman Travel Agreement – and for a long time they were essentially treated as permanent residents. That changed when the Howard government amended the definition of “Australian resident” in social security laws to exclude New Zealanders. The Howard changes were prospective – they only applied to those who crossed the Tasman after 26 February 2001. So while newcomers couldn’t receive many government welfare payments (including unemployment, youth and supporting parent benefits), Kiwis already settled in Australia still could.

Regardless of the inequities involved – and there are many – the distinction between these two categories has, until now, remained completely clear. The new bill, however, qualifies “Australian resident” to exclude anyone who holds a special category visa – protected or unprotected – from eligibility for the job commitment bonus. As the bills digest prepared by the Parliamentary Library comments, this is “an exception to the usual practice in Australian social security law” and “a change without precedent in the entitlements offered to this group.”

Since the job commitment bonus is only payable to long-term job seekers aged between eighteen and thirty who find gainful employment for at least twelve months, the changes will not affect a large number of New Zealanders. Those who arrived after 2001 would be excluded anyway, as would many who arrived earlier (because they would be too old to be eligible). No doubt there will be some individuals who will be denied the payment – a New Zealander who arrived in 1990 at age two and is now twenty-six, for example, despite being an Australian resident under any common sense understanding of that term.

Given the focus on one very specific payment, it is hard to understand why the provision has been included at all. The cost savings are likely to be tiny. Given the intention of the bill – to encourage the long-term unemployed to become independent of government payments – it would make sense to include “protected” New Zealander welfare recipients in its scope.

This has led New Zealanders on both sides of the Tasman to interpret the provision as a signal that further changes are on the way – that, far from acceding to persistent and growing demands for fairer treatment of Kiwis who arrived in Australia after 2001, the Abbott government may be preparing to head in the other direction. On this reading, the entitlements of all New Zealanders – including those who settled before the 2001 changes introduced by John Howard – would be at risk.

This seems a reasonable interpretation of the explanatory memorandum to the bill. Under its statement of compatibility with Australia’s human rights obligations, the memorandum says that protected visa holders “will be treated like other New Zealand citizens” for the purposes of the Job Commitment Bonus.

This sets a “very dangerous precedent,” says advocacy group Oz Kiwi. It suggests that the entitlements of “protected” special category visa holders are not protected at all, and can be diminished “however and whenever” the government wishes. Oz Kiwi says the Australian government is “using its poor treatment of post-2001 arrivals to justify stripping rights from pre-2001 arrivals in the name of equality.”

Whether or not this is the intention will only become clear in future legislation. If it does, there may not be much that New Zealanders in Australia or the New Zealand government can do about it.

Of the thirty-one speeches during the second reading debate over the bill only two – by Labor MPs Jim Chalmers and Julie Collins – raised concerns about its treatment of New Zealanders. After scrutinising the bill, the Parliamentary Joint Committee on Human Rights resolved to seek clarification from the employment minister “as to why it is considered necessary to exclude protected SCV holders from accessing the Job Commitment Bonus, and the basis for considering that their inclusion may jeopardise the goals of the measure.” The reality, however, is that New Zealanders resident in Australia don’t vote and don’t carry much clout.

Official protests from New Zealand may not have much impact either, even with the marked change of tone. In his answer to the question put to him in parliament, prime minister John Key used the terms “discriminate” and “discrimination” to refer to Australia’s treatment of New Zealanders – stronger language than he has been known to use previously. Existing restrictions on New Zealanders’ entitlements in Australia are, however, evidence of diplomatic battles fought and lost in the past. •