Now he sang, now he sobbed 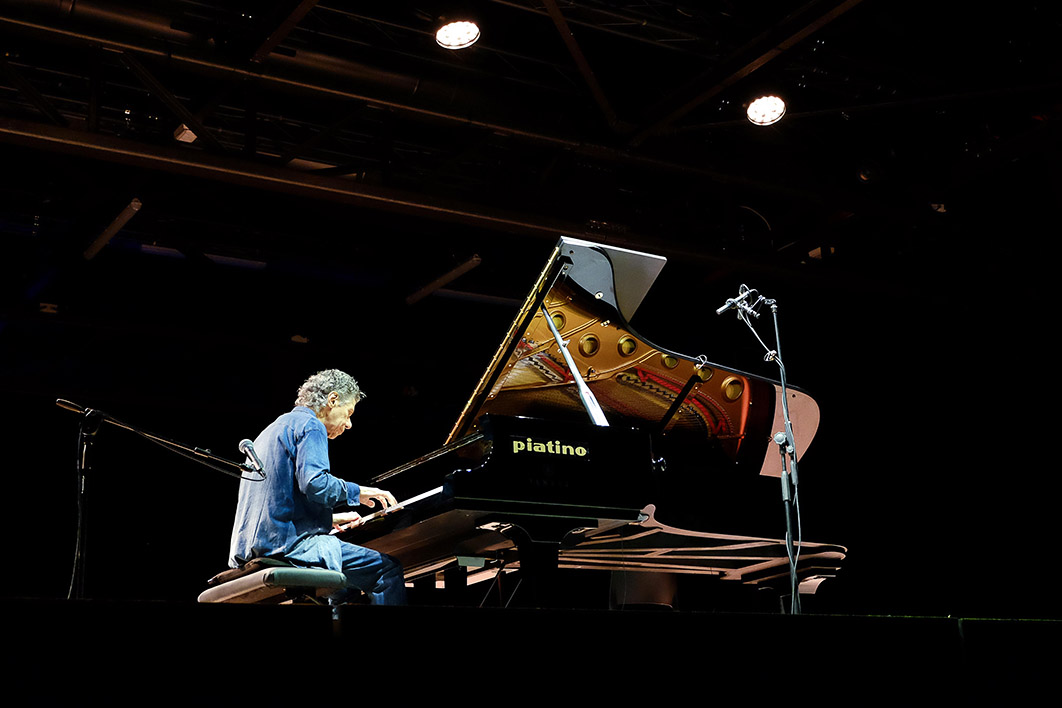 At the heart, rhythm: Chick Corea on the stage in Turin in November 2018. Bruno Brizzi/Pacific Press/Alamy Live News

Chick Corea (1941–2021) may have been the last popular star of jazz. His name, like that of Louis Armstrong, was known to a wide public that in many cases would have had little knowledge or love of jazz in general. Yet Corea achieved his fame without ever having a bona fide hit tune. In his enormous and wide-ranging recorded legacy, there is no equivalent of Dave Brubeck’s “Take Five” or Herbie Hancock’s “Watermelon Man” or Weather Report’s “Birdland” (to say nothing of “What a Wonderful World”).

Corea became famous by having a finger in so many musical pies. And he did it all at the highest level. He could play straight-ahead bop like his great idol, Bud Powell, and Latin rhythms with the naturalness of his Cuban contemporary, Chucho Valdés. His electronic keyboard work for Miles Davis in the late 1960s was pioneering and morphed into his own band, Return to Forever, first as a purveyor of Latin jazz-pop, now sultry, now madly dancing; later as something rockier and more driven. Corea’s classical forays, although occasionally unnecessary (like his Mozart concertos with Bobby McFerrin), included the vital and inventive collection of Children’s Songs inspired by Béla Bartók’s books of Mikrokosmos. It was through these that he found his widest audience, many of whom quickly became his interpreters.

Corea liked to speak of “experiments.” He had an insatiable musical curiosity and an often playful spirit of enquiry. But he was always serious about the work. Even in the Mozart concertos, the improvised doodles before each movement and the spontaneous embellishments of the melodic lines were based on eighteenth-century practices of preluding and ornamentation.

Corea’s first album as leader, Tones for Joan’s Bones, was released in 1968 (two years after its completion) and featured a quintet line-up, à la Miles Davis, with a rhythm section complemented by trumpet and sax. But that same year he recorded a second album that properly revealed his credentials. Now He Sings, Now He Sobs was, on the face of it, a classic jazz trio recording with Miroslav Vitouš on bass and Roy Haynes on drums, but the playing was fresh and bold — melodically, harmonically and rhythmically — and age has not wearied it. The sheer confidence with which Corea launches into the mercurial preamble to the first track — a minute of melodic fragments, dense chords and changing metres that seems to involve echoes of jazz gone by — is still breathtaking.

A great deal of Corea’s later career can be traced back to that album, which produces remarkably unified trio playing from three musicians who hadn’t previously worked together, amid a welter of apparent musical contradictions: the sings/sobs dichotomy of the I Ching–derived title is a pointer to Corea’s variety of approach. This is a creative musician laying out his wares.

Between the recording and release of the album, Corea joined Miles Davis’s group where, in short order, he would become a necessary part of the trumpeter’s exploration of jazz–rock fusion. On Filles de Kilimanjaro, he played an RMI electra-piano on “Mademoiselle Mabry,” and in early 1969 he was one of three electric keyboard players (with Herbie Hancock and Joe Zawinul) on Davis’s groundbreaking, proto-ambient In a Silent Way. Later that same year he was back in the studio with Davis and Zawinul for the Bitches Brew sessions.

Although it’s often paired with In a Silent Way — the albums, made just months apart, have many of the same personnel — Bitches Brew is a very different affair. Corea’s contribution to the former had largely been as a sprinkler of fairy dust, but on Bitches Brew he was, in effect, an extra drummer. The rhythmic precision of his playing is sometimes overlooked by those who think of him primarily as a tunesmith, but it is what unifies his progress through a lifetime of different jazz encounters.

While still in Davis’s band, Corea and bassist Dave Holland were already forming Circle with drummer Barry Altschul and reed player Anthony Braxton, their free-jazz experiments making further use of Corea’s percussive playing. Yet no sooner was Circle up and running than Corea formed Return to Forever, the band that in its first manifestation — and particularly with its second album, Light as a Feather — would bring him his greatest mainstream success. Corea played a Fender Rhodes electric piano with Joe Farrell’s flute and soprano sax, Stanley Clarke’s astonishingly agile double bass (on the first album Clarke had played electric bass), Airto Moreira’s ever-inventive percussion and Flora Purim’s heart-stoppingly simple vocals.

“The whole idea of style is a red herring,” Corea told me on The Music Show in 2006. “Style is always a result of the idea, and of the experiment itself. So what results in a band like the first Return to Forever was not a style that was thought about at all, it was a feeling of music and a certain expression in communication and atmosphere… among the musicians themselves.

“This resulted in choices like: ‘Well, I think I’m going to use the Fender Rhodes for this, and gee Joe, why don’t you play the flute in this part? The flute sounds really nice with the Fender Rhodes: let’s do that. And, Stanley, instead of playing electric bass, why don’t you play acoustic bass on that piece? That’ll give it a different sound. And Airto, would you please play that samba beat that I like so much?’ Things like that finally ended up in the sounds that you hear. You listen to it when it’s all done — specially thirty-five years later — and you want to give it names, like ‘What style is that?’”

Light as a Feather contains tracks that look back and forward. Most obviously, there’s “Spain,” based, like Miles Davis and Gil Evans’s “Sketches of Spain” on Rodrigo’s Concierto de Aranjuez, and really a homage to Miles. But there’s also “Children’s Song,” with its Orff-like ostinato pattern pointing to those piano pieces that were still more than a decade away.

For Chick Corea, jazz — music — and his career were always in the present tense. All those experiments had continued potential; nothing was ever let go. Musical friendships were nurtured and rekindled. Just as the world had him pegged as an electric keyboard player, he formed a piano duo with his old friend, Herbie Hancock. A still older friend, the vibraphonist Gary Burton, with whom Corea had once worked in Stan Getz’s band, formed another duo with him. In the 1980s, the trio with Vitouš and Haynes was reformed. Return to Forever indeed.

Throughout it all, through all the experiments, Corea’s piano playing remained central, and it was grounded in an unwavering technical ability; even in his eightieth year, there was no evidence of decline. And at the heart of his technique was rhythm. •

A transcript of Chick Corea’s interview with Andrew Ford on The Music Show is available here.

Is parliament at last recognising the deep problems in its own work culture? 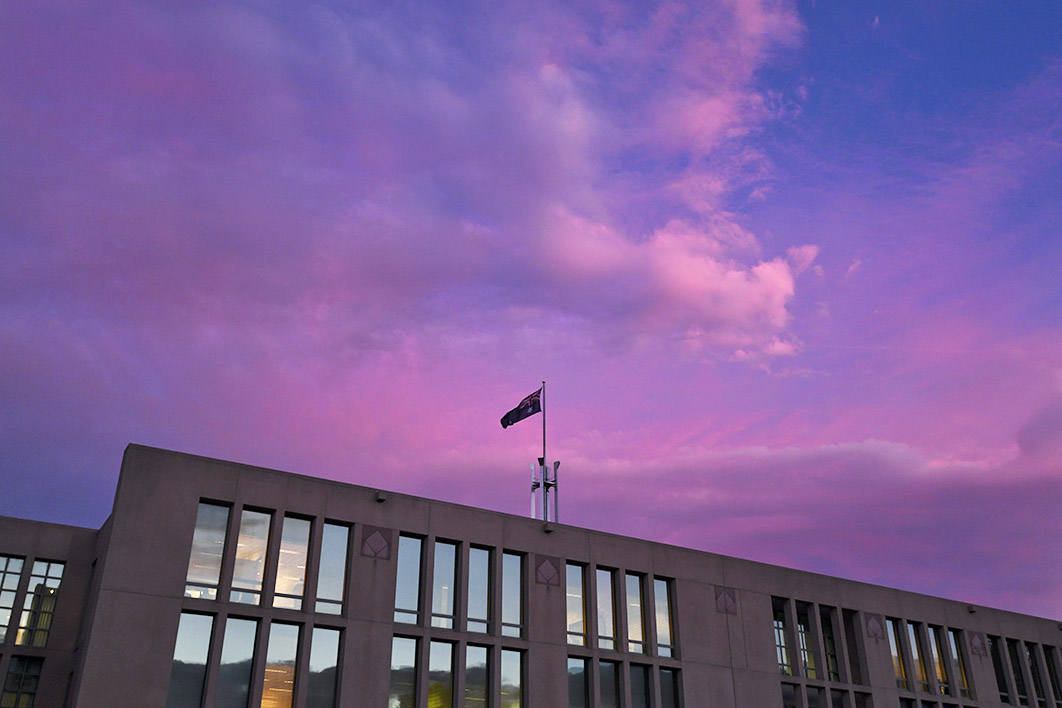