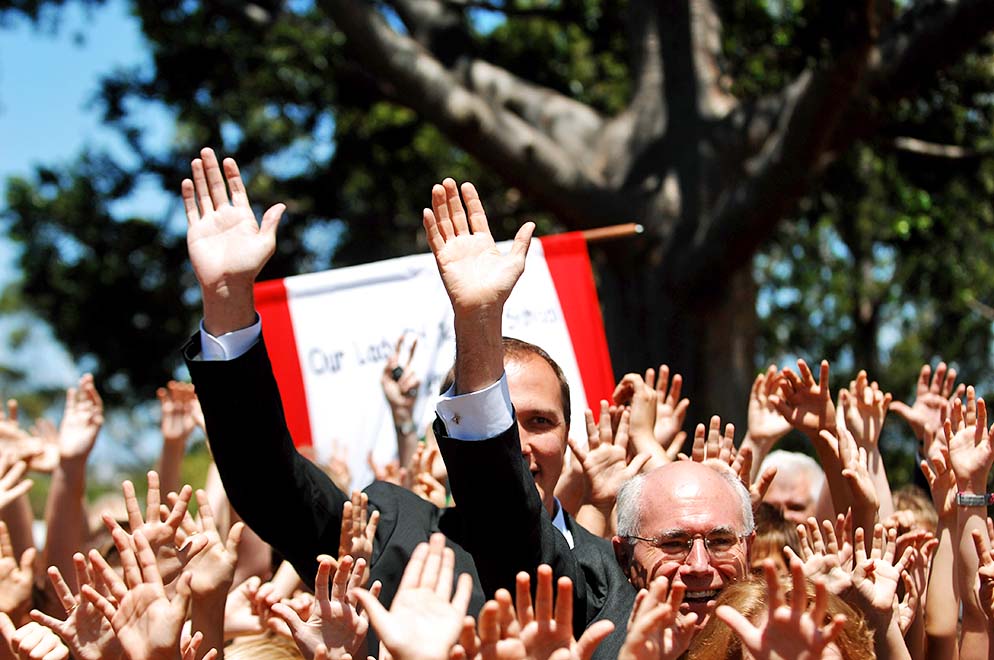 Safety in numbers: Peter Dutton (left, obscured) with prime minister John Howard and students from Our Lady of the Way Primary School in Petrie, Brisbane, during the 2007 election campaign. Paul Miller/AAP Image

Immigration minister Peter Dutton is the government’s hard man. Taking over the mantle from Scott Morrison as the most prominent figure on the Liberal Party’s hard right, he is a polarising figure both among voters and within his own party.

In some ways, the former Queensland cop acts as though he is the de facto prime minister, speaking with impunity on energy policy, marriage equality, the ABC and other issues outside his portfolio; he is often the apparent agenda- setter, with the rest of the government falling into line.

He is also arguably the most powerful man in the government. As an immigration minister with unprecedented new power to overturn rulings of the Administrative Appeals Tribunal, he makes decisions that are effectively beyond judicial review.

In a recent report, Playing God: The Immigration Minister’s Unrestrained Power,the human rights group Liberty Victoria argues that the authority vested in Dutton puts him in a class of his own within the government: he has more unchecked power over individuals’ lives than any other minister, including prime minister Malcolm Turnbull.

With a Tony Abbott comeback looking even more unlikely than ever – the former PM is eroding his own small core of support by the day – Dutton has taken over as the undisputed leader of the right. Should there be a move against Malcolm Turnbull before the next election – and at this stage, despite the poll doldrums, this is looking highly unlikely – Dutton would be the preferred option.

A more probable scenario, however, is that Turnbull will take the Coalition to a loss at the next election, at which point he will quit and Dutton will become the first Queenslander in the Liberal Party’s history to hold the post of opposition leader. Beyond that, anything is possible.

Yet Dutton, for all his prominence, is something of a mystery. Who is he? Where has he come from? More importantly: where might he be going?

Ask current and former colleagues for their impressions and the same words keep on cropping up: stolid, steady, dependable, single-minded, thick-skinned, unimaginative, unemotional, combative, devoid of self-doubt, dedicated, ambitious. No one doubts his capacity for hard work.

He has come a long way from modest beginnings in the northern Brisbane suburb of Boondall, the son of a bricklayer who later became a builder and, still later, with his son, a property developer. The Duttons – perhaps a paradigm of what came to be called aspirationals – found the funds to send Peter, the eldest of five, to a private Anglican school. At nineteen, he joined the Young Liberals, the following year graduating from the Queensland Police Academy; his police career, mixed with work on the family building and property business, lasted until 1999.

In 2001, aged thirty, Dutton was elected to parliament in the seat of Dickson, having defeated former Australian Democrats leader Cheryl Kernot. Three years later, he was workforce participation minister, becoming one of the youngest ministers since Federation. He rose quickly, later taking on the difficult health portfolio.

Not all his colleagues were impressed. I remember meeting one senior minister at an airport and remarking to him that Dutton still talked like a Queensland cop, impassive and deadpan. The minister nodded, adding after a pause, “Yes, and thinks like one too.”

With the Coalition losing office in 2007, and Dutton almost losing his seat, he sought to move to a safer seat in 2009, especially since a redistribution now made Dickson a notional Labor seat. He was badly rebuffed in his home state in a failed bid that also damaged the standing of the then opposition leader, Malcolm Turnbull, who had supported Dutton’s candidacy in the Gold Coast seat of McPherson.

While party leaders seldom choose to involve themselves in preselection wrangles, when they do they place their authority on the line. (In the distant past, a mere nod from Bob Menzies would have saved a threatened member.) Dutton, who believes in loyalty as a defining value, has never forgotten Turnbull’s support.

A candidate with strong local support had already stitched up the endorsement by the time Dutton, with no connection to the area, threw his hat into the ring. With the merged Liberal National Party still finding its way in Queensland, Dutton’s foray into the process put several noses out of joint, with one local party veteran complaining about his “elevated sense of entitlement.”

While Dutton’s own judgement might have been found wanting (but he might be forgiven on the grounds of desperation blindness), the party organisation must take responsibility for not having taken him aside before the ballot. He was, as it turned out, simply hung out to dry. (Suggestions at the time that the old National Party machine resented Dutton were groundless, but Dutton himself – as he tends to do when under pressure – pointed the finger.)

For a time, that looked like the end for Peter Dutton. He huffily dismissed recontesting Dickson and Julie Bishop, then, as now, Liberal deputy leader, was moved to comment that no one is guaranteed a seat. Rethinking his decision to quit, though, Dutton stood and defied the odds in 2010, quite easily retaining the seat.

But that was then – and much has changed. Fast forward to the present and the Queensland party organisation is once again faced with difficulties in Dickson, now held by just 1.6 per cent and, on current polling, looming as a potential loss. In a move aimed at protecting Dutton, the party is proposing a rescue plan that might save him, though at the cost of weakening its chances in three adjoining seats.

In a submission to the Australian Electoral Commission, the party proposes shifting conservative voting areas in neighbouring Lilley and Longman into Dickson. Such a move, if adopted, would mean no similarly favourable boundary changes for adjoining Petrie, held by Luke Howarth, who increased his hold on the seat at the last election despite going into the contest with the narrowest margin in the country.

It remains to be seen just how the redistribution plays out, but it looms as a critical element in the still unfolding scenario of the rise and rise of Peter Dutton. History suggests it would be a mistake not to take him very seriously. •