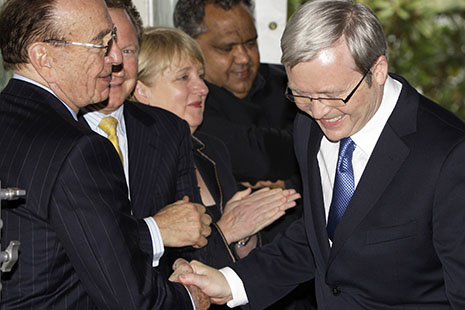 THE PUBLIC doesn’t read much about the detail of government relations with the media barons because the news organisations they control – newspapers, TV and radio – rarely discuss it. But there has been a significant change in relations between the Murdoch press and the Rudd government that has startled the Canberra press gallery.

Rudd has attacked the journalistic standards of the News Ltd newspapers, and much of it was clearly aimed at the Australian. Although it has a small circulation, the paper is closely read by political journalists and politicians and has a role in setting the media agenda each day. Throughout the Howard years, the Australian was favoured with a steady flow of leaks from Howard’s office while the Fairfax papers got nothing. It has as good a staff of journalists as any paper in the country, many of whom in their writings were critical of many aspects of the Howard government. Nevertheless, the paper was overtly biased towards Howard. When the Newspolls, published exclusively by the Australian, were so rotten for Howard during 2007, the paper’s commentators could always find some ray of hope for the Coalition.

After Labor’s 2007 election win, contrary to expectations, the government drip feed continued for the Australian, despite its many post-election attacks on the Rudd government. Bear in mind that the paper’s editor-in-chief, Chris Mitchell, had been a friend of Kevin Rudd and Wayne Swan since his Brisbane days with the Courier Mail. In August last year Inside Canberrra newsletter revealed Rudd’s meeting with Mitchell in Mitchell’s office, accompanied by Wayne Swan, Julia Gillard and Lindsay Tanner. At this meeting Rudd confided in Mitchell his concern about the rise of China’s military power. In 2008 Mitchell was widely believed to be the source of a story in his paper of a conversation between Rudd (at Kirribilli House) and George Bush. The story claimed that when Rudd had spoken of the need to call a meeting of the G-20, Bush enquired “What’s the G-20?” Mitchell was a guest of Rudd at Kirribilli House at the time the phone call with Bush took place.

Despite this, and despite critical campaigns against the government by the paper, the Australian stayed on the drip feed. UteGate seemed to be the last straw for Rudd. Like other News Ltd papers, the Australian played up the affair with fervour and seemed as anxious as Malcolm Turnbull to generate a major furore around allegations that Rudd had given special favors to car dealer John Grant, who had loaned him a used utility for his electorate work. Even when UteGate collapsed after an email Turnbull was relying on turned out to be a fraud, the Australian didn’t stop. It ran a piece under the heading of “Ipswich Inc at the heart of OzCar.” The report was a strained and unconvincing attempt to link Rudd and Grant to the disgraced Brisbane property developer, George Cheihk. Another factor which angered Rudd was the heavy campaign the Australian ran attacking Julia Gillard’s school infrastructure program. The paper ignored Gillard’s comprehensive rebuttal of its claims and continued the attack.

At a press conference in Darwin following Kevin Rudd’s meeting with state premiers last week, Mathew Franklin of the Australian asked the prime minister a question about UteGate. The PM launched into an attack, which is worth quoting at some length. “I think, what a number of people have said to me, Matthew around the place is where have we kind of got to, when you have major papers like the Daily Telegraph, the Courier-Mail and the Adelaide Advertiser running on their front page that the prime minister of the country is corrupt, and then secondly the editors it seems not having sighted any original document in terms of this email, and thirdly, it turns out that that email is a forgery, I would have thought a few people would want to know how all that happened, what sort of journalistic checks were put in place for that to be the case, or is it simply being sort of airbrushed from history? I think the other thing which sort of comes up is, I mean the usual accusations when political leaders respond to factually inaccurate reporting in the media, in this case in those papers that I referred to, is to accuse the political leaders in question of having some sort of glass jaw. It may simply be that what people want is just some basic answers as to how that might have happened, that’s a pretty basic thing. The other thing I saw the chief executive of your own news organisation do yesterday was, in responding to this, indicate that somehow the deputy prime minister was raising these matters because she’d felt set upon by your newspaper over the coverage of the Building the Education Revolution stuff. Well, all’s fair in love and war, I mean, you guys will take whatever editorial position you want on the Building the Education Revolution and that’s been the case.” Rudd described this treatment of Gillard as “journalistic retaliation”.

Interestingly, the PM referred to “the Murdoch press” at the press conference. One wonders whether he blames Rupert for the News Ltd papers being so tough on his government. On several occasions when in the United States Rudd has gone out of his way to court Murdoch, obviously hoping to keep him on side, despite Murdoch’s obvious support for Howard.

The Australian is not taking this lying down. Following on the serve Rudd delivered last week, the paper rushed to return fire the next day with a piece attacking Rudd, curiously by Imre Salusinszky, its NSW state political roundsman, who has never worked in the Canberra press gallery. On Monday Glenn Milne, who has probably written more anti-Rudd stuff than anyone in the gallery, devoted a whole column to vilifying Rudd. One of Milne’s strangest complaints concerned Rudd’s defence of Gillard in the face of the Australian’s “fair and accurate reporting of the tattered state of her so-called ‘education revolution’.” Milne ignored the point-by-point demolition by Gillard in parliament of the Australian’s campaign.

In the Financial Review Laura Tingle reported that Rudd’s office believes the Australian’s chagrin relates to its failure to be put “on the drip as had ostentatiously happened under the Coalition.” On the contrary, I think the paper has been favoured over Fairfax papers until very recently. Tingle astutely observed, “News Ltd papers, meanwhile, reassure themselves they have been fearlessly going where others don’t dare in the public interest, with the fact they are wrong being only a minor irritation.”

What Fairfax journalists are wondering is whether they will now be put on the drip feed with News Ltd papers spurned, or whether the drip will be turned off altogether, or perhaps directed to commercial television stations and particularly Laurie Oakes of the Nine Network. Rudd’s media relations will be watched with interest as the next election draws closer. •

Rob Chalmers is editor of the newsletter Inside Canberra and the longest serving member of the Federal Parliamentary Press Gallery.

Sprucing up the horse and buggy

New recommendations for electoral reform are a step in the right direction, but the pace continues to be perplexingly slow, writes Peter Brent 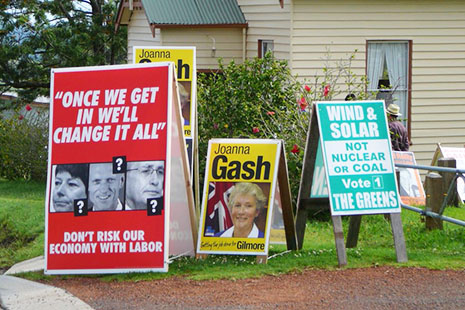