New polling confirms that being in charge has a powerful influence on voter perceptions, writes Peter Brent 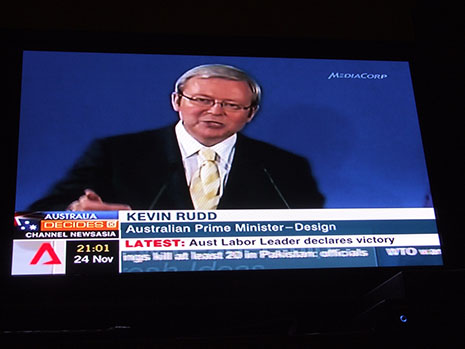 SOON AFTER the 2004 federal election, Labor’s fourth loss in a row, former party powerbroker Stephen Loosley expressed a sentiment shared by many politics watchers. “To regain national government,” he wrote in the Australian, “Labor needs to be viewed as the better alternative in international affairs and economic security. These issues were pivotal strengths for the entire Hawke–Keating period of government, when the Coalition was marginalised.”

Loosley had it the wrong way around. The best way for a political party to be seen to embody these strengths is to get elected to government. During 2007 the opposition under Kevin Rudd never remotely approached the Howard government on these measures, but it did enjoy huge leads in voting intentions and achieved a big win at the election. After that, perceptions adjusted. Incumbency brings its rewards, and oppositions are nearly always “marginalised.”

This is borne out by the results of this week’s Essential Research survey of voters. Since late 2007, Essential has been running weekly online political polls of around 1000 respondents randomly selected from a database of about 100,000 Australians. The database, or panel, is compiled by Your Source.

While Essential’s data usually gives Labor a bigger lead in voting intentions than other pollsters, this week’s 58 to 42 per cent two-party-preferred figure sits within the ballpark of the most recent ACNielsen (56 to 44), Newspoll (57 to 43) and Morgan face-to-face (also generally kind to Labor, 60.5 to 39.5).

The most interesting questions from Monday night’s survey gauged perceptions of which leader could best handle eight “issues of national importance.” The comparison, however, was not between Rudd and opposition leader Malcolm Turnbull, but between Rudd and his predecessor as prime minister, John Howard. Rudd was considered “better at” six of these – most dramatically “Indigenous issues,” at 52 per cent to 13, “International relations,” 40 to 27, and “Handling the economy in the interests of working people,” 50 to 25. Howard was ahead on “Defence and security” 35 to 30 and “Handling the economy” 39 to 37. (The latter lead is, in statistical terms, negligible.)

Those extra words – “in the interests of working people” – provoked dramatically different responses to the two economics questions, which shows the importance of how questions are phrased in surveys, even when the distinction is rather meaningless. (Is that 10 per cent or more of respondents saying that Howard’s economic stewardship was superior to Rudd’s only for the unemployed and people not in the workforce?)

These numbers reveal the power of incumbency. But they also show that perceptions of the Howard government’s credentials on economic and defence matters remain robust almost two years after its demise.

There’s a similar story with Newspoll (published in the Australian) which a month before the 2007 election put the Coalition ahead of Labor on who “would best handle the economy” by a whopping 53 to 29. After the election the gap narrowed and has continued to do so, with the latest measurement, in February this year, coming in at a statistical dead-heat, 40 to 39. Of course, Newspoll compares Labor with the current Coalition team, which is different from delivering a judgement on a previous government. But it will be surprising if Labor is not ahead of the Coalition the next time the question is asked.

Overall, you could say that the Essential figures reinforce the view that the Coalition (particularly the Liberal Party) enjoys a general advantage over Labor on perceptions of economic competence, onto which other factors like incumbency, length of time in office and the actual state of the economy can be overlaid.

It’s also worth remembering that questions involving “better” do not as a rule ask “by how much?” It’s likely that in 2007 most Australians believed a Rudd government would be inferior economic managers to the Howard team, but not to a great degree. A Labor election, they felt, would not lead to disaster.

Convincing the voters that he is not reckless is, of course, one of Malcolm Turnbull’s challenges. Electors hate risk. But they rarely see it in an incumbent. •

Peter Brent, a researcher at the Australian National University, is editor of Mumble