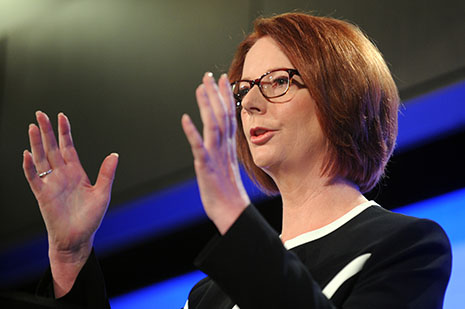 IT WAS rather overshadowed by her announcement of the election date, but when Julia Gillard addressed the National Press Club last week she also pointed out that the time it takes Australians to travel to work has been increasing over the last ten years. The average time spent in this unrewarding enterprise has climbed by an hour and a half per week, said the prime minister, and “as many as one in six workers spend more than an hour every day getting to and from their job.”

So was Gillard about to announce a major initiative to assist cash-strapped state governments improve public transport? No she wasn’t. It’s an indication of how far “Labor values and purpose” (to use Gillard’s own phrase from the same speech) have changed in recent decades, that what would once have seemed simple common sense – that long commuting times needed government initiative in the field of urban transport – is unlikely even to have crossed the mind of the prime minister and her advisers.

The remark about commuting times was part of the opening of Gillard’s speech, one of several facts and figures intended to provide a profile of the nation at the beginning of 2013 as a prelude to an account of where she intended taking it. Gillard’s theme was that life is becoming more stressful and uncertain for many Australians, and that she and her government understood their concern and were committed to helping relieve their anxiety. Yet, as SBS chief political correspondent Karen Middleton astutely remarked when the prime minister took questions, the speech also pointed to Australians’ continuing good fortune. Despite the global financial crisis, we remain affluent by international standards, and we enjoy a high level of personal safety, being far less likely than Americans to become the victim of a homicide. Was Gillard suggesting that Australians’ anxieties were not warranted by reality? And, asked Middleton, were there some things that government simply couldn’t fix?

Apart from longer commuter times, Gillard seemed to be suggesting that Australians’ anxieties arose from higher power bills, pressures on their living standards, declining superannuation returns and stagnating house prices. As in the Monty Python song “I’m So Worried,” in which even the baggage retrieval system at Heathrow is a cause for concern, there’s apparently very little about modern life that does not disturb the peace of mind of the average Australian. The challenges of combining parenting with caring for ageing parents, the fear of crime, and concerns about social cohesion, the war in Afghanistan, climate change and the “struggle to make ends meet”: all of this means that “life can be very stressed and pressurised,” according to the prime minister.

So how will Julia Gillard’s government fix it all? Well, the message is that it can’t, but it will do its best to use the power of the state to make people’s lives a bit less insecure and uncertain. As political scientist Carol Johnson has suggested, one effect of Labor’s embrace of neo-liberal economics since the 1980s has been that it can no longer claim convincingly that it will increase voters’ feeling of security, an important part of the party’s rhetorical appeal in earlier times. Now, under Gillard, the talk is of Labor “sharing” the management of risk with ordinary Australians through initiatives such as the National Disability Insurance Scheme. In the context of a rising dollar and declining tax revenue – other Gillard themes in the National Press Club speech – governments have hard choices to make. Nonetheless, by bearing some of the risk that is the inevitable accompaniment of life in the modern world, they have a responsibility to do their best to reduce Australians’ anxiety.

As a historian, I always find such arguments about the awful uncertainty of modern life amusing. The overwhelming majority of Australians today experience nothing like the risks that their forebears faced at any time before the emergence of a modern welfare state in the 1940s. Indeed, in the nineteenth century, the main risk for an ordinary male worker, besides being maimed for life or killed on the job, was that he would live for too long beyond the time when he was capable of work, with a virtual guarantee of an impoverished old age. Of course, a life of hard work, poor healthcare, bad eating and, for many, too much drink and tobacco ensured that longevity was a lower risk than one might imagine. The male worker’s wife would share in this poverty if she, too, lived too long.

Nonetheless, the idea of government as risk manager has been seeping into the thinking and rhetoric of some of the more thoughtful members of the government for a while. Andrew Leigh, an academic economist before he became the Labor member for one of Canberra’s federal seats, suggests that this is a useful way of thinking about much, although not all, of what governments actually do. Political and philosophical arguments about the role of government then become debates over which kinds of risk should be covered by citizens, and which by their governments. Such considerations might also be used to rethink some of the more outrageous examples of middle-class welfare left over from the Howard era. “I am yet to meet anyone who can persuade me that the proper role for government includes providing the Baby Bonus to a millionaire,” declared Leigh recently. Answering questions after her Press Club speech, however, Gillard refused to be drawn on whether handouts of this kind would be means-tested in order to free up money for spending more in line with Labor goals and values.

Given her commitment to finding “structural savings” in the May budget to fund Labor’s priorities in education and disability insurance, however, and her restrained message that the household and government profligacy of the Howard era was over, the further winding back of poorly targeted spending seems assured. Yet Gillard’s treatment of these matters in her speech was rather less than full-throated.

Yes, she said, Australian households had spent as much as they earned and then some during the Howard years, taking advantage of easy credit and borrowing against rising house prices. Those days are over now – and you sense that this disciplined and high-achieving daughter of 1960s Welsh migrants is rather more comfortable in a world where people are supported rather than coddled by governments.

But neither did Gillard fully confront the culture of middle-class entitlement and expectation that was stoked so furiously, and with such excellent electoral returns, by John Howard. The government deserves credit for its efforts in winding back Howard-era handouts, but you also sense that it really doesn’t want too much credit for what it’s already done, or too great an expectation about what it might do, for fear of punishment at the hands of voters who still rather like goodies and giveaways.

IT’s one of the characteristics of Australian politics – and perhaps politics in modern Western democracy in general – that in a competition between pyrotechnics and policy, the former will win every time. It was inevitable that the unprecedented announcement of an election date eight months out would overshadow everything else that the prime minister said in her Press Club speech. It was probably also inevitable that more attention would be paid to Gillard’s new glasses than to the substance of her speech.

What perhaps couldn’t be so easily predicted was that these first couple of weeks of the new year’s return to the ordinary business of national politics would be so extraordinary and so disastrous for the government. These disasters were beyond the prime minister’s direct control, yet also the symptoms of a political party afflicted by illnesses she refuses to treat despite repeated dire diagnoses from others. Craig Thomson was once again on the front page of the papers, now charged with 150 offences arising from his alleged misuse of his union’s credit card. And on a rather grander scale, there’s the Obeids’ ordeal before the NSW Independent Commission Against Corruption, centred on the claim that they used inside knowledge and connections arising from Eddie’s undoubted power as a factional boss in the NSW government to make the odd $30 million through coal exploration licences.

Each scandal seems almost perfectly designed to assist “stressed and pressurised” voters, especially those in marginal NSW electorates, to make up their minds about who to support in September. On top of that, the release of the latest Newspoll shows federal Labor once again a long way behind the Coalition in two-party-preferred support, at 56 to 44. Labor’s primary vote has collapsed to the low thirties.

When the prime minister recently intervened in the affairs of the Northern Territory Labor Party branch to knock off Senator Trish Crossin in favour of the Aboriginal former sports star Nova Peris, she called it a “captain’s pick.” No doubt the words were redolent of the Adelaide schoolyard of the 1970s, and some would suggest that they might best have been left there. But modern political leaders are supposed to benefit electorally by looking and sounding decisive, even when their metaphor of choice is juvenile. Without repeating the term itself, Gillard made it clear during question time after her Press Club speech that the decision to go to an election on 14 September and to announce it in January was another captain’s pick. Yes, she’d spoken to her deputy Wayne Swan and yes, she’d informed the independents Tony Windsor and Rob Oakeshott – but it was her decision.

Gillard remains cornered by difficulties that will not be resolved by any captain’s pick – the most important of which is the resilient unpopularity of her government. The May budget will be the last opportunity for a captain’s pick, but the captain will face some very hard choices and, above all, will not have the luxury of being able to distribute largesse in the manner favoured by Australian federal governments in the third year of their term. Yet a failure to achieve an immediate and substantial bounce in the polls in May will spell the end of her government – as surely as a similar failure by Howard and Costello in May 2007 signalled their demise. •

Extreme weather and the knowledge controversy

Australia is lagging in its recognition that local views and information count, argues Jane Goodall 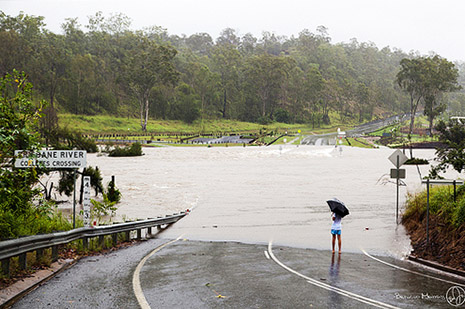