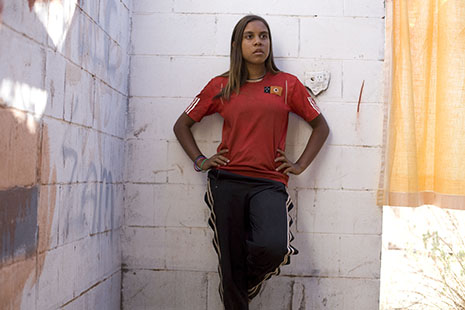 WARWICK THORNTON’S Samson and Delilah has landed in the Australian filmic field like a meteorite. It is a great film; it is cinema according to Jean-Luc Godard’s unrelenting ideal: “truth twenty-four times a second.” Only an Aboriginal film maker could have done it; anyone else would have gone for compromise, consolation, a resolution more cheaply bought.

In a tiny Central Australian desert community, two very young, defenceless people are trying to get themselves a life, with little help from anyone else. Delilah (Marissa Gibson), aged fourteen, tends a dying grandmother, an artist called Kitty (Mitijili Gibson) who – as we’re shown very succinctly – has been depending on a callous, shyster dealer for income; he happens also to be running the local store. Much later, it becomes clear that Kitty’s paintings are on sale in Alice Springs for about one hundred times what she was being paid.

At night, the girl sits in a broken-down car listening to Latin music (Anna Gabriel’s), which seems to voice her longing for love and for wider worlds. Other music works in contrast; Charley Pride sings of a sunshiny day while Samson (Rowan McNamara) wakes and reaches for his tin of petrol. Between bouts of sniffing, the tousled boy hangs around Delilah, and follows her as she pushes Kitty’s wheelchair along between clinic and home. Kitty jokingly pronounces him the girl’s husband; she declares him the right skin for Delilah, and directs her to talk with him.

Thus tradition and custom persist, thinly, in a setting of almost unrelieved wretchedness. The store and clinic are there, but we don’t see people around them. There’s a public phone, which rings on interminably, unanswered. There’s a garage band on the go with drum and guitars; when Samson, a younger brother, tries to join in – with an impudent, raucous riff – they rough him up. His father is in gaol, and that’s the only news we get of the always-missing middle generation. After Kitty’s death Delilah is beaten by older women who accuse her, unjustly, of failing her grandmother. The boy and girl, each a family outcast, form a near-wordless attachment. Samson steals a car, and drives away with Delilah until they run out of gas – he’d bottled some of it for sniffing.

When they come to Alice Springs, we’re looking at the first film I know in which, suddenly, that difficult and extraordinary town is seen as outback Aborigines might see it: it’s the city, the big smoke, as full of danger and indifference as of promise, and blighted by its own brands of racism. For Samson and Delilah, the art galleries on Todd Mall, gloriously crowded with the kinds of paintings Kitty was making, are alien places; they make big money from Aboriginal art, but they don’t want scruffy black people hanging round. The kids steal food from a supermarket, and set up camp with a couple of blankets under a bridge on the waterless Todd. (At that point, I was struck by whitefella tourist’s guilt: I’ve walked over that same bridge half a dozen times in recent years, not sparing a thought for anyone who could be living underneath it.)

Samson is sniffing almost continuously. A middle-aged nomad, Gonzo, most engagingly played by Scott Thornton, shares his campfire and tinned spaghetti, and tries hard to get the two to talk. Samson stammers pitiably; has his habit damaged his speech? Delilah’s silence is different, and highly eloquent; it’s the silence of one who watches, listens, waits. She steals art materials, and makes a painting she tries to sell; predatory males are hooning around. She moves wondering through a church, looking at Christian symbols; though she is obviously battered and needy, the priest does nothing, just keeping an eye on her, making sure she leaves. Among the town’s privileged white people in a cafe, she breaks out briefly in rebellion; and before the two can begin to pick themselves up, things get quite a lot worse.

Back in the community, there’s still nobody offering help or shelter; but there Delilah makes her moves, deals decisively with Samson, and picks up the endlessly ringing phone. She promises to leave a message at the store – for whom, about whatever, we won’t know; what we do know is that she has crossed an invisible borderline, and refused paralysis. She makes that essential, symbolic move on her own. In this film’s landscapes there are no teachers, youth refuges, social workers or rehab clinics in sight, not even the maligned town camps of the riverbed. The invitation is to share the travelling of these two individuals, however wilfully it was chosen.

Reviewers have used terms like “bleak” and “tough going.” I found it utterly mesmerising. The visual surfaces are stunningly beautiful, drenched in desert sunlight, linked and sustained by the songs; the boy and girl are beautiful too, in ways of which they seem totally unconscious. All the beauty works in ironic counterpoise to the sight of social devastation, anomie, the destructiveness of boredom.

If there’s a moment of limited, precarious hope at the end of the story, it’s very hard won. In an interview (with Keith Gallasch in Real Time) Warwick Thornton said that “from day one, these two kids had to live. That was the most important thing. It would have been quite easy for them to die and that’s just wrong, that is so wrong. I couldn’t live with myself as a writer. I need them to live for me as a human being, to feel stronger.”

So a door is left open, and the audience – shocked, sobered, regaled – can take home a little of what they want.

EVERY YEAR for the past ten, the Message Sticks indigenous film festival has run over a May weekend in the Playhouse, one of the smaller theatres under the Concert Hall at the Sydney Opera House. Audiences have built up – this time the theatre was regularly packed out; for some programs the queue wound out along the Broadwalk, and scores were turned away. Samson and Delilah, now on release, led the program; the shorter films will play on ABC TV in coming months, as will Fire Talker, Ivan Sen’s hour-long documentary on Charles Perkins, and the seven brief tales in the program called The New Black.

These, averaging ten minutes, are short stories. Several of them are linked thematically to Samson and Delilah, pushing through alienation and resistance to open onto hope. Romaine Morton’s The Farm, Adrian Wills’ Bourke Boy and Dena Curtis’ Jacob are particularly good. Deborah Mailman’s Ralph, a Redfern community tale centred on the starstruck longings of an adolescent girl, works in a different register, one in which race as such is not an issue at all. The girl’s fan letters go off into the distance, unanswered, but then her longing is assuaged in friendship. The distant world fades; her own neighbourhood opens on to fun, a shining new dress, bright lights and dancing. It’s like the opening of new understanding for the white audiences: sooner or later, we might see that the Aboriginal presence in our lives is something we can actually enjoy.

This year’s Message Sticks has incited some productive debate among reviewers. Writing in the on-line industry journal Screen Hub, Tina Kaufman has raised the question of how far Aboriginal-generated film making should remain cordoned off from the main stream:

“Back in the late 80s and early 90s there was much criticism and discussion about Indigenous filmmaking, about the politics and aesthetics of work by and about Aboriginal people and issues, and protocols for working in those geographical and topical areas were established. But with the setting up of an ongoing support mechanism through the Indigenous Branch of the then AFC, now Screen Australia, much of that dialogue seemed to cease; was the issue suddenly compartmentalised, tidied away?”

At the same time Geoff Gardner, writing in his invaluable bulletin Film Alert, suggests that Message Sticks is in danger of being sealed off as “vanity and coterie” exhibition.

It sounds like a debate worth pursuing, but for the producers of Message Sticks, Rachel Perkins and Darren Dale of Blackfella Films – presently busy attending to the continuing circulation of The First Australians – such questions don’t arise. They believe that there are distinctive Indigenous voices and stories, which need their own place. Looking (twice) at Samson and Delilah, and at Deborah Mailman’s dazzling short story, I’d find it hard to argue. Looking then at the queues for Message Sticks, I wonder whether the reconciliation process has perhaps inched a little further on. The news might not have reached certain corners of Alice Springs. •