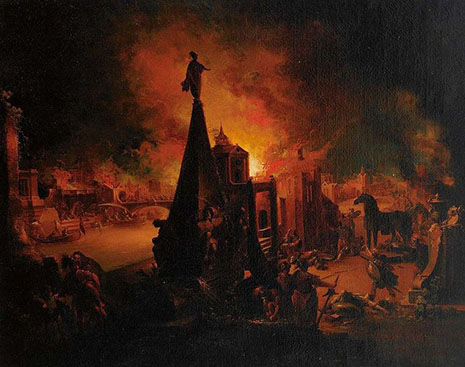 Blick auf das Brennende Troja, by Johann Georg Trautmann (1713–1769). Oil on canvas, 54.5 x 68 cm. From the collections of the granddukes of Baden, Karlsruhe

DAVID MALOUF’s Ransom is set in a world on the brink of ending. It elaborates on the last scene of Homer’s Iliad, in which the Trojan king Priam retrieves the body of his slain son Hector from the fearsome Achilles. This is a poignant interlude in the Trojan War; afterwards, Troy will be destroyed. Its topless towers will come crashing down in flames.

Ransom superbly evokes the atmosphere of an “end time.” At the outset Malouf’s Achilles consumes himself in wrath, “waiting for the break.” The scene switches to Priam, whose kingdom is being choked to death. “I believe that the thing that is needed to cut this knot we are all tied in is something that has never before been done or thought of,” he says. “Something impossible. Something new.” Ultimately Priam and Achilles have a meeting of minds. Each feels released from a stalemate. In a lovely ironic touch Malouf shows Achilles so uplifted in spirit that even his heels glow.

Malouf is a great writer of yearning. In Ransom everything is poised awaiting what will emerge. As Malouf puts it, there is the light of an “otherwise” everywhere. The pace of the narrative is beautifully controlled and the reader is held poised, forced to read slowly. Sometimes time slowing up is itself is the subject of a sentence: “Days, weeks, season after season,” as the narrative states as one point. Even the famously swift Achilles and the quicksilver god Hermes move slowly. Hermes is jocularly incarnated as a languid youth awaiting action.

By slowing the reader down Malouf makes us attend to each moment and to every detail. Instead of sweeping battalions we get the winding of the Scamander river and the clip clop of the mules. In the Iliad Hermes takes Priam to Achilles in a flash. Malouf adds the character of Somax, who conveys Priam in a cart pulled by two mules. Their pace is far from godlike. With the garrulous Somax, Priam has ample opportunity to experience ordinary things, which suits his changed way of thinking. He leaves behind his preoccupation with fate and what the gods decree will happen in the end, and gains a “new-found eye for irrelevant happenings.”

But despite fine writing there is something missing in Ransom. Beyond Priam’s fresh appreciation for small things, the new things that both he and Achilles seek are ill-defined. After agreeing to give back Hector’s body twelve days after killing him, Malouf has Achilles come to a realisation which trips over itself and leaves us in the dark about what has changed. “The affection of the gods for a man [Hector] whose end it was part of his own accomplished life to accomplish he can now take as an honour intended also to himself. And that, he sees, is how it might have been from the start, and this this first, not the twelfth night.”

Ransom’s problem is that, while it eschews battle scenes, it does not extricate itself from the Iliad’s ethos of martial heroics and pride. This undermines the novel’s evocation of new values and ways of thinking. Priam wins Achilles over with old fashioned male honour, imploring him “man to man, as a father, for the body of my son.” This makes Achilles think of his own boy Neoptolemus “hard bodied and full of manly resolution.” The most fully realised relationships in the book are lineages of males: Priam and the dead Hector, the doomed Achilles and Neoptolemus (who will avenge his father and kill Priam in the sack of Troy) and even Somax and his dead son, killed tragically in adolescence. The fullest female character is Hecuba, Priam’s wife, who is anxious about Priam’s plan to get Hector’s body but is ignored.

Of course this world of male heredity and honour is true to the Iliad and integral to understanding its stories. But Malouf could have departed more radically from this world than he has done. In doing so he might have found more to say about Troy’s relevance in today’s world and why men still bring towers toppling down in flames. •