Whom the gods wish to destroy… 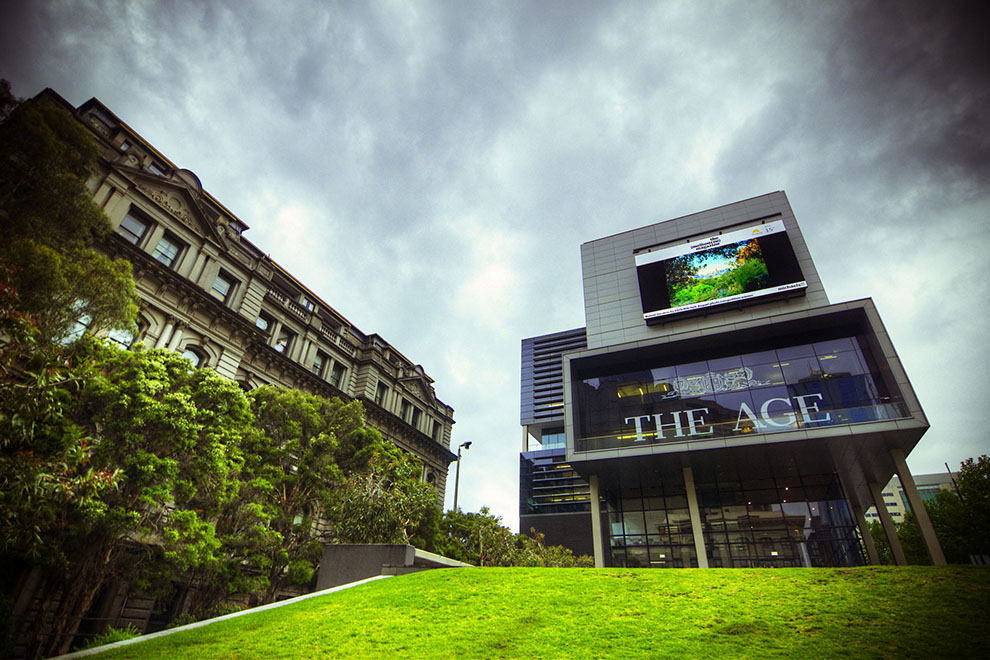 Multiple causes: The Age has been one of the casualties of the decline of a newspaper empire. Photo of the Age’s Collins Street headquarters by Indigo Skies Photography

Stop the Presses! How Greed, Incompetence (and the Internet) Wrecked Fairfax
By Ben Hills | ABC Books | $39.99

Manufacturing in Australia is not doomed so long as there are theories to be constructed (and published as books) about the decline and fall of the once-mighty Fairfax newspaper empire. As that kind of empire goes, Fairfax can make a couple of claims none of the others can. It is the oldest survivor of the era of family-run newspapers, and its flagship Sydney Morning Herald (founded 1831) is the oldest continuously published newspaper in the southern hemisphere. The higher they fly, the harder...

A flurry of book-length attempts at explaining the company’s slow-motion implosion has appeared in recent years, the most notable until now being Killing Fairfax, by Australian Financial Review reporter Pamela Williams. That 2013 paperback was subtitled “Packer, Murdoch & the Ultimate Revenge,” in a nod to the complex causes that turned the Age, once regularly referred to as “one of the world’s great newspapers,” into a shrinking compact remnant of its old Leviathan self.

In those glory days, senior executives were proud of the paper’s global reputation for excellence but still able to puncture any pretensions of grandeur with a well-aimed shaft. This reviewer, who worked for the Age at the beginning of the 1980s when its daily circulation exceeded 250,000 – a record unequalled in its 160-year history – recalls ripples of mirth spreading among the staff on hearing that deputy editor Peter Cole-Adams had picked up the phone at the paper’s then lavishly staffed London bureau and satirically intoned, “Good morning. You’ve reached the Age, one of the world’s newspapers.”

Williams’s work treats the humbling of Fairfax as a sort of manslaughter mystery: no one set out to murder the Old Firm but, when it comes to whodunnit, everyone seems to have given Fate a helping nudge.

Hot on its heels comes the latest investigation of this media giant's comeuppance, from the acerbic pen of former Age wunderkind and Sydney Morning Herald super-correspondent Ben Hills, whose warts-and-all portrait of his former boss, legendary Age editor Graham Perkin, appeared in 2010.

Hills, too, resists a simplistic “It was Wokka wot dunnit” explanation, although he does give due emphasis to the reverse-Midas touch of Young Warwick Fairfax in the late eighties. The culprits Hills fingers in the subtitle of his book – “How Greed, Incompetence (and the Internet) wrecked Fairfax” – are a motley crew. Yet the tale he tells of how they interacted to hasten the hollowing-out process is not only credible but convincing.

Acknowledging “the competition,” Hills promises in his prologue to provide more than a mere historical account of corporate downfall. It is a promise largely redeemed in nearly 400 pages that see the author move from boardroom fly-on-the-wall to social commentator, and even to rural reporter. For it was not just the celebrated mastheads of big-city titles that were lashed by a perfect storm of hostile elements: the smallest, most remote outposts of empire also came tumbling down.

It is Hills’s gift as a reporter capable of adding the human dimension to his description of a powerful institution’s first intimations of mortality that lifts Stop the Presses! above the ruck. His shoe leather can be heard pounding the pavements of Cobar, in northwest New South Wales, as he discovers the damage done by the felling of Fairfax to the least of its far-flung family.

The occasional quirky turn of phrase can be jarring. At one point, Hills writes of “Asia and India” as if the latter weren’t part of the former. Equally occasionally, an omission grates. Robert Whitehead is mentioned as a Fairfax marketing guru but he, too, occupied the editor’s chair at the Sydney Morning Herald, which surely rated a mention.

Far more often, though, Hills’s impish sense of humour provokes a laugh out loud. One of his many sources, former Herald business editor Ian Verrender, recalls trudging into the boss’s office to take his redundancy after half a lifetime with the company. The editor-in-chief, Sean Aylmer, “sprang forward with his hand outstretched and a big smile on his face crying, ‘Congratulations!’ as though he had just won a holiday for two in Bali.”

The more I read, the more I found myself thinking Fairfax is like a patient who doesn’t realise he is dying despite every new day (or at least every financial year) bringing a new and grimmer prognosis. It wasn’t Aylmer alone who failed to comprehend what was happening. From Fred Hilmer, whose appointment as CEO may, unknown to himself, have been a piece of Machiavellian foreplay by one Kerry Packer, to Greg Hywood the downbeat optimist, the Grand Old Publisher increasingly resembles an invalid who has lost the will for yet another bout of “life-saving” surgery.

Inevitably, many of Hills’s sources and dramatis personae also appeared in Williams’s narrative. One by one we meet the various scions of the Fairfax clan and watch it unravel because of shortcomings ranging from internecine jealousy to reckless inattention. There goes Ron Walker, who claims the moral high ground in giving rapacious Gina Rinehart the keys to the kingdom but comes across more like a Trojan horse than a knight in shining armour; here comes Brian McCarthy, whose distaste for bringing in expensive consultants to tell newspaper managers how to manage is a familiar theme, but nonetheless refreshing.

If Fairfax management were reminded of that view once in every book likely to be written on its failure, it would still be worth hearing. Had it been heeded, of course, there would be no market for this offshoot of Australian manufacturing, a growth industry in rough drafts of the history of how the Fairfaxes, who for forty years repeatedly had the winning hand in the hold ’em poker game of quality journalism, ended up losing it all and cashing in their blue chips.

The oft-cited observation “Whom the gods wish to destroy they first make mad” is variously attributed. But, pace Porgy & Bess, it ain’t necessarily so. With apologies to Longfellow (and perhaps Sophocles), Ben Hills’s fine-grained study of this modern-day epic tragedy lends itself to the suspicion that in certain cases the gods prefer to make them far too comfortable, careless and greedy for their own good. •

Ken Haley tutors in journalism, media and politics at Swinburne University of Technology. He was a Walkley Award–winning journalist for the Sunday Age and is the author of two books on long-distance travel: Emails from the Edge and Europe @ 2.4 km/h.