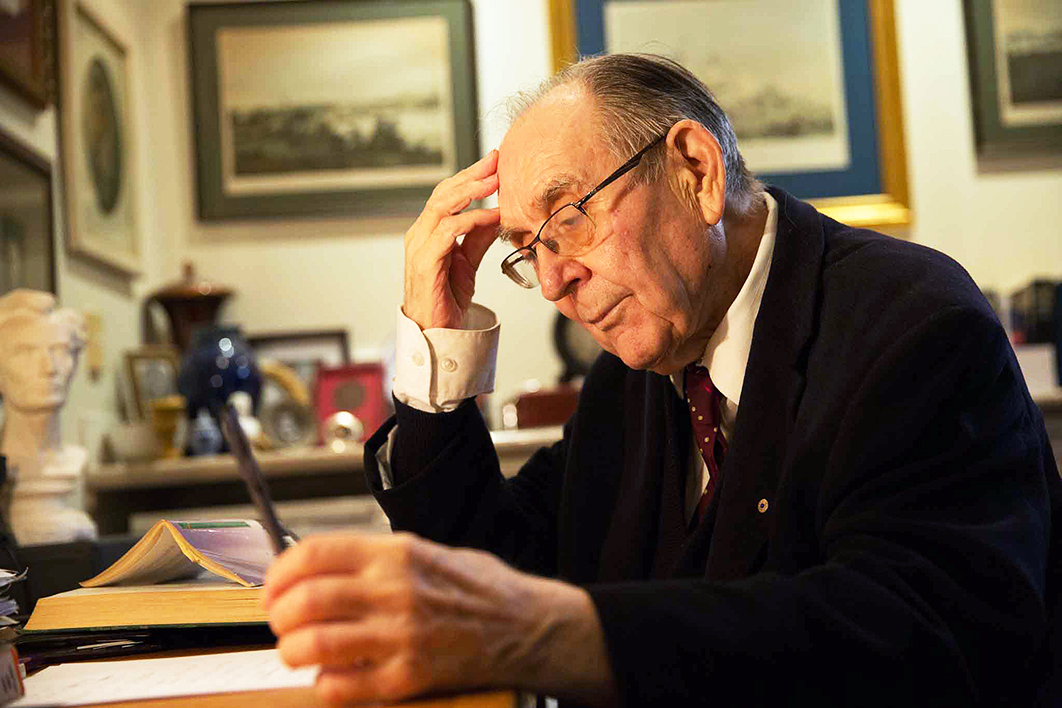 Behind the passion: Graham Freudenberg in Ruth Cullen’s documentary, The Scribe.

The death of Graham Freudenberg on Friday severs a link extending through modern Labor history, back to the party’s darkest days of unreconstructed impotence under opposition leader Arthur Calwell in the early 1960s.

Freudenberg did much to change that hopeless reality. An early middle-class convert to the party of the working class, he played a critical role in the transformational electoral successes of Gough Whitlam, Neville Wran and Bob Hawke. As one of the nation’s first political staffers, and surely the longest-serving, he was a gifted and learned wordsmith, enabling Labor’s leaders to articulate the case for policy change and political reform. And, as an author and Labor historian, he documented the party’s epic transformation in his 1977 record of Gough Whitlam’s leadership of the party, A Certain Grandeur.

In the backrooms of Labor’s campaigns Graham was an ever-reassuring figure, trusted, thoughtful and indefatigable, swathed like a not-so-dormant volcano in a permanent cloud of tobacco smoke, the upper slopes of his rumpled three-piece pinstripe lightly dusted with ash.

What made him such an effective speechwriter? The first part of the answer is that he cared, passionately, for the Labor cause and believed that Labor’s best opportunity to take government was to argue its cause. He operated on the assumption that Labor’s leaders could and eventually would win that argument — and it would not be done with a glib soundbite for the cameras but with extended and repeated argument, set out in speeches, which needed time, persistence, reasoning and courage. Labor’s best forum, he believed, was parliament; but the argument had to be won everywhere — in the party, in the unions, in the community. Ultimately, he trusted the men and women of Australia, respected their intelligence, and expected that they would reward Labor once it had presented its case and won the argument.

Behind the passion there was, of course, a lot of technique. Freudenberg’s lifelong reading of Shakespeare and the political speeches of Edmund Burke, Abraham Lincoln, Benjamin Disraeli and Winston Churchill provided deep wells of inspiration and technical knowledge of the craft. Ruth Cullen’s retrospective documentary about Freudenberg, The Scribe, illustrates this so well, with her subject insisting that plagiarising the greats was an essential, even admirable, aspect of the craft. He even plagiarised himself. In Cullen’s documentary, he asserts that he only ever really wrote one speech — “Vote Labor” — but did it hundreds of times over.

Inspired by those examples, he wrote many excellent speeches, including Hawke’s at Lone Pine for the seventy-fifth anniversary of the Anzac Day landing, Whitlam’s 1972 policy speech, and Whitlam’s gutsy diatribe — “certainly, the impotent are pure” — at the Victorian Labor state conference in June 1967. But perhaps his greatest — the one that made the most powerful case, in the most difficult political circumstances, with the greatest historical impact; the one that best showcased his skills — was the “drumbeat” speech delivered by Calwell in the House of Representatives on 4 May 1965.

Freudenberg had joined Calwell’s staff as press secretary in 1960, aged twenty-six, and had recently set out Calwell’s entire manifesto by ghostwriting the book Labor’s Role in Modern Society. Now, in this remarkable speech, Calwell declared Labor’s opposition to the Menzies government’s decision to commit the first battalion of the Australian army to fight in South Vietnam. It must have been hard to elevate Calwell — voice like an iron rasp, face like a granite slab with glasses — to the level of statesman, but this did it:

We do not think it will help the fight against communism. On the contrary, we believe it will harm that fight in the long term.

We do not believe it will promote the welfare of the people of Vietnam. On the contrary, we believe it will prolong and deepen the suffering of that unhappy people so that Australia’s very name may become a term of reproach among them.

We do not believe that it represents a wise or even intelligent response to the challenge of Chinese power. On the contrary, we believe it mistakes entirely the nature of that power, and that it materially assists China in her subversive aims. Indeed, we cannot conceive a decision by this government more likely to promote the long-term interests of China in Asia and the Pacific.

We of the Labor Party do not believe that this decision serves, or is consistent with, the immediate strategic interests of Australia. On the contrary, we believe that, by sending one quarter of our pitifully small effective military strength to distant Vietnam, this government dangerously denudes Australia and its immediate strategic environs of effective defence power.

Thus, for all these and other reasons, we believe we have no choice but to oppose this decision in the name of Australia and of Australia’s security.

These are words to be spoken out loud, listened to, heeded and quoted. Here is a perfect integration of policy substance and rhetorical form. Each assertion (“We do not…”) is perfectly balanced against another (“On the contrary…”), building Labor’s platform block by block as it demolishes the Coalition’s defensive wall, and appropriating for Labor the Coalition’s position as the true representative of Australia’s national interest and national security. There is no jargon or pretend technicality, yet the vocabulary is rich and every sentence is complete and grammatically strong. The tricolon of the first paragraph (“wise… timely… right”) could be straight out of Cicero.

This is a “high” style of speechwriting — formal, balanced, steady, cumulative, moral. Let’s plagiarise Freudenberg’s title of his history of Whitlam’s leadership and say it has “a certain grandeur.” Its restraint grants great power to those moments when emotions are expressed: thus the impact when we are invited to experience the “suffering of that unhappy people” and to feel the shame that “Australia’s very name may become a term of reproach among them.”

Calwell spoke of the risk of America’s humiliation in Vietnam and the likelihood of Australian conscripts being sent to supplement the regular troops. Both claims were prophetic (as Freudenberg himself claimed in his entry on Calwell in the Australian Dictionary of Biography).

The peroration of Calwell’s speech came with devastating effect when he spoke — “through you, Mr Speaker” — to his Labor colleagues in parliament and that “vast band of Labor men and women outside.” Again, the balance, the rich vocabulary and the forceful argument are notable:

The course we have agreed to take today is fraught with difficulty.

I cannot promise you that easy popularity can be bought in times like these; nor are we looking for it. We are doing our duty as we see it.

When the drums beat and the trumpets sound, the voice of reason and right can be heard in the land only with difficulty. But if we are to have the courage of our convictions, then we must do our best to make that voice heard.

I offer you the probability that you will be traduced, that your motives will be misrepresented, that your patriotism will be impugned, that your courage will be called into question.

But I also offer you the sure and certain knowledge that we will be vindicated; that generations to come will record with gratitude that when a reckless government wilfully endangered the security of this nation, the voice of the Australian Labor Party was heard, strong and clear, on the side of sanity and in the cause of humanity, and in the interests of Australia’s security.

This warning and prediction, too, were fulfilled. The drums did beat, Labor’s motives were misrepresented and its patriotism impugned, and its anti-Vietnam position contributed mightily to its landslide defeat the following year. That was the price Labor had to pay for its principle. But vindication did come, albeit after seven years, when Whitlam won power in 1972 and a generation of young voters identified Labor as the party of sanity and humanity.

When Graham Freudenberg was finally honoured by the NSW branch of the Labor Party at a fundraising testimonial in June 2017, the drumbeat speech was front and centre of attention. In a moment for the ages, Bob Hawke paid moving tribute by quoting those words from the Calwell speech. Astonishingly, they sounded as fresh in Hawke’s voice as they had in Calwell’s — and there lies a final insight into Freudenberg’s success as a speechwriter.

I worked alongside Graham when I was writing speeches for Bob Hawke in the 1980s and early 1990s. We shared a broom closet in the old Parliament House, though fortunately Freudy spent a lot of time in Sydney, writing for Wran, and anyway was a night owl, so our hours did not overlap much. We divided the workload, with Freudy taking responsibility for Hawke’s more formal speeches while I churned out the daily grind.

I had written precisely no speeches for anyone before I joined the prime minister as a speechwriter, yet with great self-confidence I dared to edit Freudy’s words, sharpen his arguments and generally lift his tempo. So perhaps some creative tensions were inevitable in the early days. I was a young bull and he was the old bull — though both of us were expert in the production of bullshit (as we joked later; he used a euphemism).

I saw it as my job to write the speeches Hawke himself would have written had he the time and opportunity to do it. I tried to make my words sound as much like Bob Hawke as possible, employing his vocabulary and his arguments and structuring it all so the speech moved along to achieve what he wanted for a specific audience. I particularised. Freudy generalised. In addition to all the work to suit the leader and the occasion, he had an added ability to elevate his words to a higher plane of thematic generalisation, of historical sweep, of moral strength.

This is why he was a great speechwriter, the best. And this is why Hawke in 2017 was able, without irony and with grave respect, to quote Freudenberg’s text for Calwell in 1965. Those voices are silent now, though, worryingly, the drum still beats. •

Companies can draw on the ideas of their workforce in creative ways. hddigital/iStockphoto 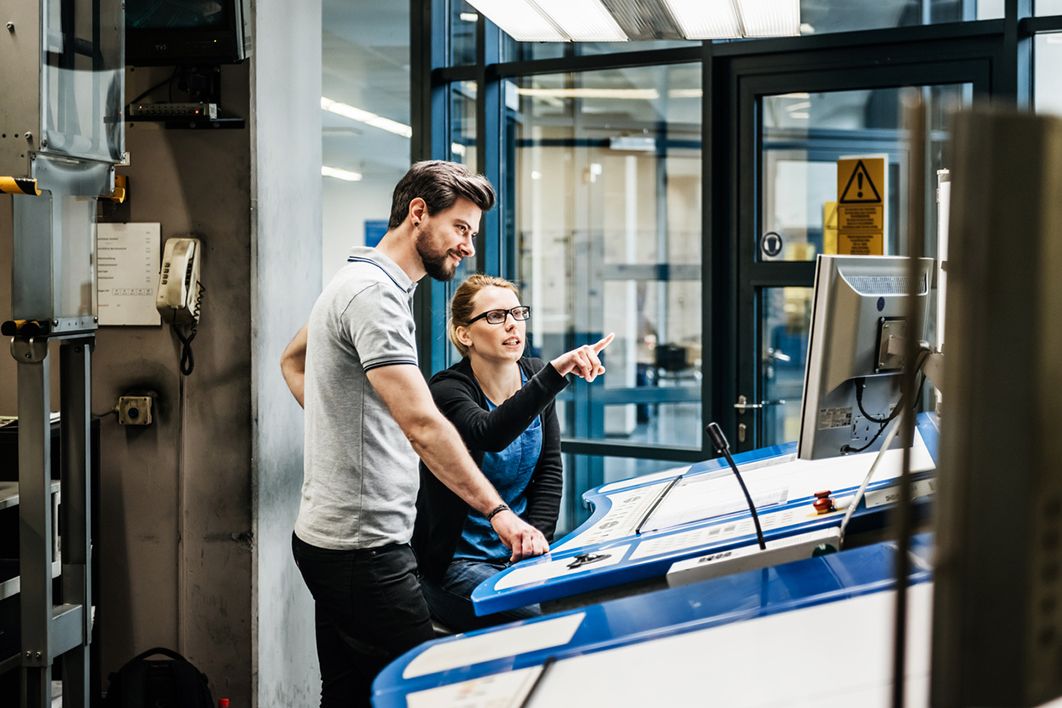 Companies can draw on the ideas of their workforce in creative ways. hddigital/iStockphoto