A clean energy future for whom?

Fergus Green unpacks the carbon pricing package to discover, at its core, a tension between fundamentally different visions for the future of Australia’s economy and environment 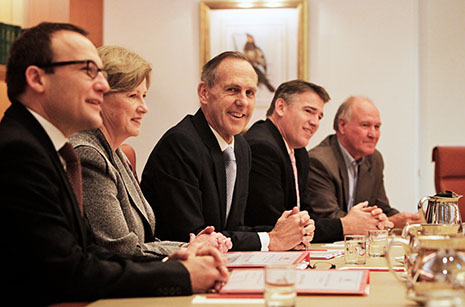 THE federal government wants to convince us that its new carbon price package creates a “clean energy future” for Australia. If you’re wading through Sunday’s avalanche of announcements in search of a clear policy signal to this effect, though, you won’t find it. The incentives in the package pull the economy in contradictory directions. But searching for policy coherence is a misguided exercise. It’s better to think of the package as the chaotic aftermath of the first real battle in a long war over the future composition of Australia’s economy and environment in a warming world.

I say the first real battle because, although various political parties and social groups have always held visions for our collective future that differ fundamentally from the political mainstream, the negotiations over the carbon package mark the first occasion on which such an alternative vision has been expressed through a political party with sufficient power to influence a major economic and environmental reform, at least at the federal level.

Until the Greens took the balance of power in both the House of Representatives (along with some green-minded independents) and the Senate (in their own right), the battle for Australia’s future was a one-sided bloodbath. Labor, the Coalition and Australia’s business and policy elite have long shared a basic commitment to the rapid and far-reaching expansion of fossil fuel consumption and production – for domestic use and for export – in Australia. During the debate, such as it was, over the Carbon Pollution Reduction Scheme, none of these parties or groups challenged this deep brown vision for Australia’s future. Rather, the issue was whether or not to give it a green-tinged veneer by adopting a weak emissions trading scheme so riddled with loopholes that its only notable effects would have been to entrench the fossil-fuelled status quo, waste more than $20 billion of taxpayers’ money in unjustified handouts to the biggest emitters, and distract from Labor’s commitment to double Australia’s coal exports over the next decade or so.

Unsurprisingly, Labor’s strategic commitment to a brown Australia has not changed in the eighteen months since the demise of Kevin Rudd’s scheme. Before the last election, Prime Minister Gillard ran on a “no carbon tax” platform. She had to be dragged into carbon policy negotiations by the Greens as the price of their support to form government. Since they’ve been at the negotiating table, it is no secret what Labor has fought for: a low carbon price; an early switch to a cap-and-trade scheme with a low emissions reduction target of 5 per cent below 2000 levels by 2020; ludicrously high compensation to the “big polluters” it now pretends to demonise; the exemption of petrol from the scheme; extensive reliance on less-secure land sector credits from the Carbon Farming Initiative; and insubstantial (if any) new complementary measures for renewable energy. Most importantly, Labor has maintained its commitment to allow Australian emitters to “outsource” their emission cuts (to rely on imported carbon credits from abatement activities in other countries, which are expected to be significantly cheaper than Australian carbon permits, to acquit their carbon liabilities) so they can keep polluting here.

The key difference this time is that the Greens were on the battlefield fighting for a different vision: a genuine clean energy future for Australia. They have, accordingly, fought for measures that would spark a structural transformation of the Australian economy: a well-designed carbon price scheme with a higher carbon price during the fixed price phase, as well as scientifically credible emissions targets and stringent caps on outsourcing during the cap-and-trade phase. They have also advocated investing the (necessarily higher) projected revenues from such a scheme into essential complementary measures to develop renewable energy industries, establish twenty-first-century infrastructure, improve our woefully poor energy efficiency record and conserve our natural environment and biodiversity.

In the resulting package, there is no clear winner. The mish-mash of carbon pricing, tax changes, grants schemes, investment bodies, commissions and inquiries reflects gains and losses on both sides.

Labor’s vision is more apparent in the carbon price mechanism itself – with the early switch to cap-and-trade based on the default 5 per cent target that will allow extensive international and land sector offsets – and in the industry compensation package which, at more than $22 billion over the next six years alone (including the “government-only” measures for gassy coal mines) is arguably more wasteful than the Carbon Pollution Reduction Scheme. The Greens’ main mark on the scheme is evident from its governance arrangements – particularly an independent Climate Change Authority, which will recommend emissions targets, and Productivity Commission reviews of industry compensation and fuel tax arrangements. These innovations will both enable, and build political pressure for, deeper cuts and less wasteful compensation in the future.

In the package of complementary measures, however, it is the Greens who have emerged ascendant. With a $10 billion clean energy investment corporation, a new agency to administer $3.2 billion worth of renewable energy grants, funding for a negotiated closure of 2 gigawatts of the dirtiest power plants, and a prohibition on using any of these agreed funds for carbon capture and storage projects, the Greens have peeled back the coal industry’s fig leaf and tipped the balance of low-emissions technology development in favour of renewables.

THE biggest battle, however, is yet to come. Australia now has a target of achieving 80 per cent emissions reductions below 2000 levels by 2050, yet it seems unlikely we will achieve any more than the default 5 per cent target by 2020. This means that around 94 per cent of our emissions reduction burden from now until 2050 will need to be shouldered after 2020. Accordingly, rules that govern how much Australian companies are allowed to outsource their post-2020 emissions liabilities will essentially determine whether the scheme will bring about a clean energy future for Australia or whether we’ll be stuck with fossil fuels and a massive bill for imported offsets.

On this most important of matters, the new carbon price package provides no guidance. While liable emitters will be prevented (thanks to the Greens) from acquitting more than 50 per cent of their carbon liability with international offsets, this restriction only applies until 2020. From then on, the policy papers simply say that the 50 per cent quota “will be reviewed” by the Climate Change Authority in 2016. This fudge is telling: it shows that neither Labor nor the Greens were willing to compromise on their respective visions for Australia’s future.

Treasury’s modelling, released as part of Sunday’s package, gives a sense of what is at stake. Treasury projects that Australia’s emissions will exceed one billion tonnes of carbon dioxide equivalent by 2050 – a staggering 80 per cent higher than Australia’s emissions in 2000 – under a “business as usual” scenario (that is, without a carbon price). To achieve the agreed target of 80 per cent below 2000 levels by 2050, Australia will, on Treasury’s models, need to cut emissions by 897 million tonnes below the business as usual figure. Treasury projects that, by that time, 434 million of those tonnes per year (nearly half of the required abatement) will be outsourced to other countries under an Australian carbon pricing scheme in which there are no restrictions on the importation of international offsets, leaving Australia’s actual emissions in 2050 almost exactly where they were in 2000, at around 550 million tonnes. Some “clean energy future” that would be!

The Treasury modelling does not take account of some of the final details agreed to by the Multi-Party Climate Change Committee, including the 50 per cent quota limit on outsourcing that will apply until 2020. Treasury will therefore be producing updated modelling to reflect the final agreed package.

Given the fundamental importance of the outsourcing restrictions beyond 2020, and the fact that this issue is now deeply politically contested, it is no longer appropriate for Treasury to take a normative stance on the desirability of outsourcing – let alone without a quota. For example, in Chapter 5.2.2 of its modelling, Treasury claims that “while pricing carbon cuts domestic emissions, it is inefficient to meet the whole abatement task through domestic abatement.” But this comment presupposes the very question that is now at issue: the nature and content of the “abatement task.” If the task is to finance 900 million tonnes of abatement wherever in the world it may be cheapest then, yes, outsourcing is obviously an “efficient” way to do that. If the task is a clean energy future for Australia and an 80 per cent reduction in Australia’s emissions, then outsourcing is not an option, let alone an efficient one.

Treasury should, in its next attempt, model scenarios across the full range of “outsourcing” assumptions: for example, one with “no outsourcing allowed,” one with “no restrictions on outsourcing” and one with a “50 per cent outsourcing restriction.” This way, Australians can openly debate the merits of these competing visions for our economic future (though preferably with a little less hypocrisy than the opposition and a little less expediency than the government).

Some will retort that cutting that much carbon pollution entirely in Australia would be too costly or that it is some kind of green fantasy. Intelligent Australians should resist the temptation to accept this nonsense. For example, Professor Warwick McKibbin – a Reserve Bank board member and formerly John Howard’s emissions trading adviser – has long argued against allowing any outsourcing in an Australian carbon pricing scheme. Writing in Monday’s Age, McKibbin argues that relying on international offsets for even half of Australia’s abatement “has both an environmental risk… and an economic risk.” These risks are well known and have been amply discussed elsewhere.

Moreover, a well-designed domestic scheme that clearly required the 80 per cent reduction target to be met from domestic cuts, along with appropriate complementary measures, is likely to be achievable at a quite reasonable cost and would also send a clear signal to invest in renewable energy and give Australia a competitive advantage in the low-carbon global economy. As McKibbin notes, the lack of clarity about future outsourcing rules means the government’s new scheme sends no such clear signal, making investments in clean technologies more risky (and therefore more expensive) than need be the case.

Those who support the vision of a real clean energy future for Australia would do well to target this issue. One the first priorities for environmental groups after the new scheme is enacted should be to develop a long-term campaign strategy for securing a prohibition on post-2020 international outsourcing in the carbon pricing scheme. Urging Treasury to model a range of “outsourcing” scenarios, as discussed above, would be a good start.

More broadly, drawing public attention to this obscure but fundamental issue of outsourcing would help to alert Australians to the reality that the new scheme, on its current settings, will not necessarily produce a “clean energy future” at home – and it certainly won’t do so if Labor has its way. What matters is that at least this scheme has enough green armoury in it to give that vision a fighting chance. For that reason alone, intelligent and green-minded Australians should support it – but they shouldn’t down their weapons just yet. •

Fergus Green is a climate change lawyer and policy analyst.