A danger to democracy and liberty? 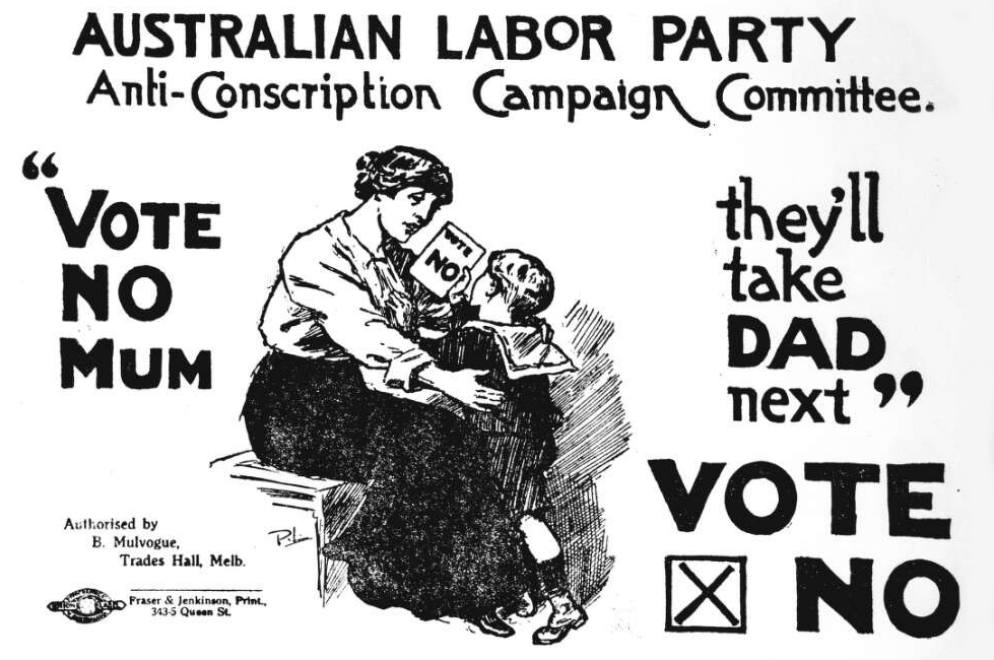 Australia’s involvement in the first world war is like a painting so overlaid with grime, gloss and retouching that the real picture is obscure. In the 1950s, complaints appeared in the press about the lack of reverence and respect among attendees at Anzac Day marches. Today, the commemoration has become public spectacle and entertainment. Although “let all men know that this is holy ground” is engraved on the facade of Melbourne’s Shrine of Remembrance, it now hosts a tourist centre and souvenir shop. This book is a welcome contribution to stripping away the popularisation, trivialisation, left mythology and right chauvinism surrounding the Anzac legend.

The conscription referendums of 1916 and 1917 have excited considerable dispute between proponents of the view that they were a triumph of democratic anti-militarism and revisionists of various ideological persuasions. As Robin Archer notes, common to both the left interpretation, advanced by historian Ian Turner, and the right reinterpretation, developed by historian John Hirst, is the view that “what really underlay the conscription conflict was a factional struggle between labour’s industrial and political wings.” Although anti-conscriptionists used the language of liberalism and freedom in their campaign rhetoric, the conflict was actually about economics and class.

Australia’s rejection of conscription certainly raises many complex questions. Was it due to the sectarian divide between Catholics and Protestants? Were the votes of Irish-descended workers predominantly influenced by class, religion or nationalism? Did Archbishop Daniel Mannix of Melbourne help the “no” case by rousing his flock, or did he cause a Protestant backlash? Were women more eager to keep their men at home, or help them at the front by sending reinforcements? Was the patriotism of farmers outweighed by their need for labour? Were the votes of newly arrived Britons in Western Australia more significant than those of the German-descended inhabitants of South Australia? Was the fear that conscripted men would be replaced at home by “coloured” workers – a threat to White Australia – a major factor? Was conscription the excuse for, rather than the cause of, a split in the Labor Party? Did conservative/Labor divisions remain solid in the referendums? Did the labour movement oppose conscription of men only because wealth was exempted? And was prime minister Billy Hughes’s stridency and aggression in support of a “yes” vote counterproductive?

The Conscription Conflict and the Great War examines all of these questions, to varying degrees. The intractable electoral data, for example, is exhaustively sifted through in Murray Goot’s chapter. Unsurprisingly, given the nature of the evidence and the passage of time, few conclusive answers emerge; but the analysis is a valuable one. As Sean Scalmer notes, “the historical memory of these episodes will have important implications for the practice of contemporary politics.” His particular point is that the conscription struggle is now mainly portrayed as a bitter and divisive episode (which it undoubtedly was). However, he points out, “by the votes of the Australian people, the limits of state power were established. By the respect granted to public opinion, the primacy of the democratic principle was confirmed.”

Contributors make a particularly strong case that traditional liberal values motivated the advocates of the “no” cause in the conscription referendums. Unlike some books that use the word “liberal” loosely, The Conscription Conflict and the Great War opens with a chapter by Douglas Newton tracing the history of British liberalism and its attitude to conscription up to the time of the first world war. Archer argues that underlying the labour movement’s opposition to conscription was the “widespread and enduring influence of liberal values.” Labour activists “understood conscription as a danger to democracy and liberty.” Archer specifically rejects the view that labour anti-conscriptionists were motivated by a factional struggle rather than liberal concerns. In his chapter on the individuals, organisations and arguments behind the anti-conscription campaign, Frank Bongiorno similarly argues that historians re-examining conscription from the 1960s onwards

have often been preoccupied with excavating the layers of economic interest and industrial motive that they assumed the rhetoric of conscription had been devised to mask. In adopting this approach, they have missed the intense intellectual and emotional attachment to freedom, as the anti-conscriptionists understood it, which lent the campaigns much of their passion.

While this argument is persuasive and enlightening, something as complex as the conscription struggle defies reduction to a single explanation. Tension between the parliamentary and extra-parliamentary wings did play a part in the Labor split. The parliamentarians were always more attuned to the harsh realities of reform through the political process than were the branches and unions, which became frustrated when the perfect society did not emerge overnight. The NSW Labor premier, William Holman, was heading towards an irrevocable break with the extra-parliamentary party when conscription became an issue. He seized it as an opportunity to free himself from restrictions he was finding increasingly irksome.

A strength of this book is its comparative treatment of conscription. Australia influenced, and was influenced by, developments in other Anglophone countries. As John Connor notes, the debate represented a “conversation” between these nations. Unquestionably, Australia’s referendums and the resulting rejection of conscription constituted a unique experience. Why did we not follow the example of the United Kingdom and other Dominions? Connor advances three explanations: countries that introduced compulsory service did so soon after entering the war; the innovation of a plebiscite made conscription more difficult to achieve in Australia; and the strength of the labour movement’s opposition was an important impediment. Ross McKibbin examines the social, economic and military differences between Britain and Australia, to explain how the former could introduce conscription (civil and military) with relatively little controversy. He argues that the successful opposition to conscription in Australia was an ambiguous victory, as it “damaged the Labor Party, inflamed sectarianism, and contributed to subsequent divisions between volunteers and those who did not serve.”

My main criticism is that this rather short book could have included more, particularly as there has been no full-length treatment of the conscription struggle since L.C. Jauncey’s 1935 account. A chapter giving the historical background – the lead-up to the referendums, the legislation, details of the campaigns, the Labor split, the aftermath – would have been helpful. Some of this information is given in various chapters, but it is not brought together to give the reader the full context. Although Joy Damousi has an interesting chapter on pro-conscription intellectuals, more could have been done to redress the absence of research on the “yes” cause.

More could have been said, too, about the conscription controversy’s effect on the major political parties. The conservative parties inherited some of Labor’s most talented performers, yet this seems to have had curiously little effect on the new party, other than the name change from Liberal to Nationalist. For Labor, the pre-existing hostility between the parliamentary and extra-parliamentary wings was intensified with malign consequences, including the megalomaniacal reign of Jack Lang in New South Wales. It was not until the 1940s, under the Labor premiership of William McKell, that a fruitful working relationship was established between the parliamentarians and the machine in that state.

The states also receive little attention, although their experiences differed, and were distinct from the Commonwealth’s. For example, arguments about the disastrous effect of conscription on Labor’s electoral fortunes are rather undermined by the fact that the party won elections in New South Wales in 1920, 1925 and 1930.

In spite of these reservations, The Conscription Conflict and the Great War succeeds, as Archer and Scalmer hope it does, in providing “a fuller understanding of the first world war, of what the Commonwealth of Australia once was, and of what it may be yet.” •

David Clune was the NSW Parliament’s Historian and is currently an Honorary Associate in the Department of Government and International Relations at the University of Sydney.

With the election of Donald Trump, the world has entered uncharted waters 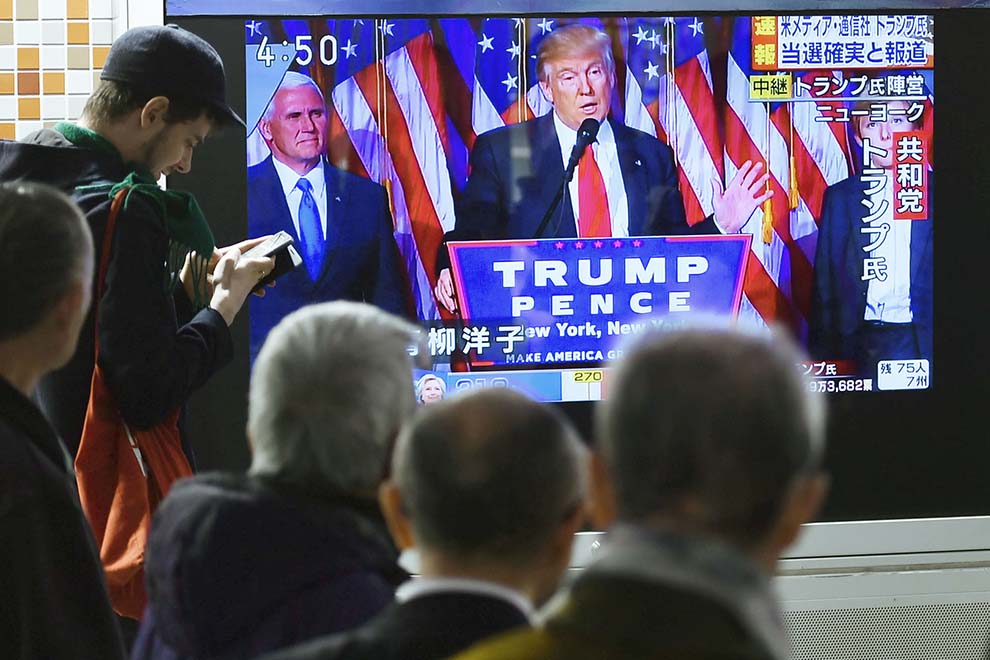