Ending the franchise to exploit your franchisees 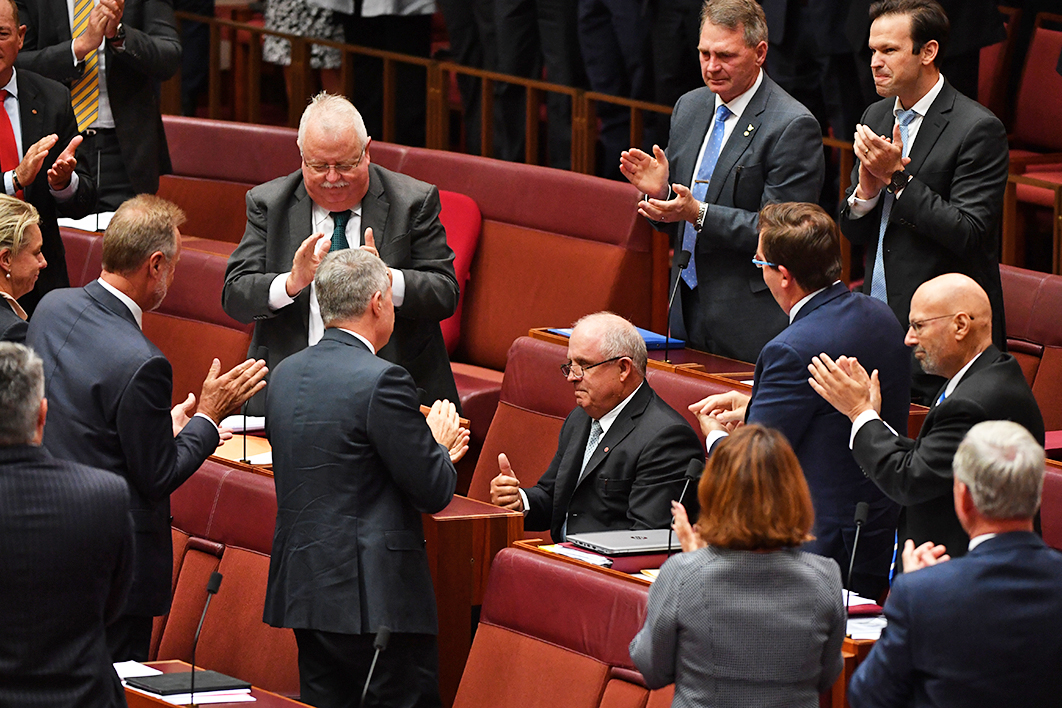 Wonderful legacy: John Williams (seated) is applauded after making his valedictory speech in the Senate on 13 February. Along with journalist Adele Ferguson and a group of whistleblowers, he can take much of the credit for two major inquiries. Mick Tsikas/AAP Image

When royal commissioner Kenneth Hayne delivered his report on the misdeeds of the banks, it was all over the papers, TV and radio bulletins, and dominated public debate. Yet when a parliamentary committee yesterday delivered a unanimous, equally scathing report on another large part of the Australian economy, it barely raised a ripple.

The banks rip off all of us. The rich and powerful who own the franchise firms we buy from rip off only their franchisees. It’s to be hoped that only a minority of the franchisors do so, but Adele Ferguson’s journalism in the Age and its siblings has exposed enough of them — 7-Eleven, Domino’s Pizza, Pizza Hut, Caltex and Retail Food Group — to suggest that abuse of power by franchisors over franchisees is widespread.

We’re not talking small beer here. Franchises cover tens of thousands of branded stores and service firms that we shop with every day — from Australia Post to McDonald’s, Aussie Home Loans to Tabcorp, Ray White to the Coffee Club, as well as Forty Winks, Flight Centre, Ella Baché, Autobarn, Jim’s Mowing and so on. Walk down your main street, or into a shopping mall, and you’re in a world largely run by franchisors selling their products to us through their franchisees.

Together, their daily sales have been estimated to comprise 9 per cent of the Australian economy, roughly the same size as the finance sector that Hayne investigated. No one is suggesting that most of them, or any of the firms named in the list above, have abused their power over franchisees. The franchise model is a good one when its owners operate it in the interests of both parties. The evidence suggests that most of them do.

But Thursday’s report by a parliamentary committee, Fairness in Franchising, confirms that the imbalance of power inherent in the franchisor/franchisee relationship has been exploited by many franchisors, at times more ruthlessly than the banks at their worst.

Examples abound; the Nine/Fairfax papers are full of them this morning. A SumoSalad franchisee who tried to set up a franchisee association arrived at his shop one day to find tradies demolishing it — on the orders of the franchisor. A couple who bought a Michel’s Patisserie franchise from the Retail Food Group paid so much money for it that they ended up losing not only the shop but their home, which was the security on their bank loan. When this parliamentary inquiry began, Muffin Break and Jamaica Blue franchisees received threatening letters from their franchisor warning that they would be sued if they made any “defamatory” statements about it.

Some have likened their experience as franchisees to slave labour. Small wonder.

Yet only the Age ran the committee’s report as its lead story today, and only its siblings gave it full treatment. The Financial Review, still outraged by the existence (and success) of industry super funds, relegated the story to page seventeen. The Australian had so many stories attacking Labor, the Greens and the unions that it had to bury this one on page twenty-three. From what I can see, the Murdoch tabloids ignored the story altogether, as did the TV news.

Sure, the issues are complex. The victims of the abuses are franchisees, not bank customers. And this is the latest of umpteen reports by parliamentary committees over the past thirty years into franchise abuse. But the recommendations in this report are far more sweeping than its predecessors’, and with Labor poised for power and on a mission to fire up competition policy, this one matters.

In a time of extreme partisan polarisation, it’s also remarkable for its unanimity. The committee’s chair in the final stages was Michael Sukkar from the Liberals’ hard right. His deputy was Labor’s Deborah O’Neill. Nationals’ senator John “Wacka” Williams was a driving force from go to whoa, and Queensland Liberal Bert van Manen and Labor’s Chris Ketter and Ged Kearney were heavily involved. Add Greens senator Peter Whish-Wilson, and all the four main parties agreed on a unanimous report, urging big changes.

“The current regulatory environment has manifestly failed to deter systemic poor conduct and exploitative behaviour, and has entrenched the power imbalance (between franchisors and franchisees),” the committee concluded. “The committee received a raft of evidence about how the abuse of contractual power can manifest in a franchise agreement. Further, the committee also received evidence that pointed to shortcomings in the current regulatory responses in relation to the duty to act in good faith and unfair contract terms provisions.

While government intervention until now has focused mainly on requiring disclosure of relevant information to prospective franchisees and establishing a Franchising Code, the committee found some franchisors have been able to drive a truck through the gaps in those measures.

“The extent and breadth of misconduct and exploitation by franchisors… demonstrates that disclosure and transparency alone, while vitally important, are an insufficient response to power and information asymmetry,” it reported. “The evidence presented to the committee during this inquiry indicates that the extent of poor corporate governance in some areas of franchising is comparable to that in the financial services sector. There are deeply rooted cultural problems that will not be resolved by a franchisor replacing a few senior executives.”

So how should we fix it? The committee is wary of overburdening franchisors that operate a genuinely collaborative business with excessive regulation. But it wants to shift from a failed model of light-touch regulation to a policed business environment by giving the Australian Competition and Consumer Commission a much bigger role, with more power to intervene and serious penalties to punish franchisors who abuse their power.

Its key recommendations are:

• The holes in the Franchising Code should be plugged, and a breach made an offence attracting the sort of penalties that now apply in other areas of consumer law. (Breaches now attract either no penalty or a “derisory” penalty capped at $63,000 per offence.)

• Information provided to prospective franchisees, including the financial records and current contact details of the previous franchisee, should be accurate and meaningful.

• Franchisees should develop “a strong national association” to represent them, and the government should authorise franchisees to bargain collectively when negotiating with the franchisor. (The report dismissed the existing Franchise Council as dominated by franchisor interests.)

• The ACCC should investigate apparent conflicts of interest when franchisors require franchisees to use specified suppliers (who often slip the franchisors an unreported “financial incentive”) even when cheaper alternatives are available.

• Whistleblowers in the industry should be given protection and brought under the new whistleblower law adopted last month.

• It should be illegal to impose unfair terms in a franchise contract, and penalties should apply to breaches. (The ACCC told the committee that the laws protecting small business from unfair contracts rarely protected franchisees because the thresholds defining small business were set too low.)

• Franchisees should have the right to exit a contract in defined circumstances.

• Arbitration of disputes between franchisors and franchisees should be compulsory when mediation fails because one side did not engage in good faith.

• The ACCC should be empowered to intervene to stop franchisors engaging in systematic “churning and burning”: repeatedly selling off the same failed franchise to new franchisees, or allowing new franchises within the territory of an existing franchise.

Much of this is what the ACCC asked the committee to recommend. From here, the report suggests, its proposals should go to a taskforce comprising Treasury, the Department of Jobs and Small Business, and the ACCC, who would come up with detailed proposals for legislative change. The unanimous backing from all parties suggests that this time, we will see real action.

Two final points. Adele Ferguson was not grandstanding when she argued in the Age today that what made this report different from its predecessors was “a series of media investigations that helped put the spotlight on misconduct.” Like the Hayne royal commission, this inquiry was essentially brought about by a tripartite collaboration between Senator Williams, Ferguson herself and the whistleblowers who came forward, with no legal protection, to shine a light into the murky secrets of how business really operates in Australia today, and force an official investigation.

They deserve our thanks. Williams retires from the Senate at this election, and what a wonderful legacy he is leaving us; few backbenchers have achieved so much to make Australia a better place.

Adele Ferguson, in my opinion, has been the journalist of the decade in Australia. She has brought to light the systematic abuse of power in both the banking and finance sectors, and in the franchise sector, by relentless digging and collection of facts, with such power and firm sense of principle that it has forced governments to embark on official investigations and reforms. She is a role model of journalism at its best.

Finally, these two reports raise the question of what else is out there. So much of Australian business seems to be focused on gaining the power to dictate the terms of contracts, and abusing it in ways alien to the competitive ideal, and to Australian notions of fairness. We need to find out more about the way our world really works, and think hard about how to make it work the way we want it to. •

Tim Colebatch is a regular contributor to Inside Story, and a former economics editor and columnist on the Age.