A great result for the pollsters

SATURDAY’S NEW ZEALAND election might have brought a change of government, but there were no real surprises – which made it a suitable finish to a bland campaign. In a 122-seat parliament, John Key’s National Party (59 seats) will govern with two other parties, ACT (five seats) and United Future (one seat), in a coalition agreement.

The National Party increased its 2005 vote by over 6 per cent to 45.5 per cent, while Labour’s vote dropped by a similar amount (about 7.3 per cent, down to 33.8 per cent). The opinion polls turned out to be quite accurate, perhaps the only surprise being ACT picking up five seats with their 3.7 per cent party vote (based on Rodney Hide retaining his Epsom seat), and a significant say in government.

While National are the obvious big winners from the election, the ACT team must be overjoyed with their party’s performance, based on “tough on crime” policies. Not only have they gone from two to five seats in parliament (1.5 per cent to 3.7 per cent), they will be an essential part of the coalition government. This should leave them in a strong position for the next election, due in 2011. In the meantime it will be interesting to see whether ACT leader Rodney Hide uses his party’s newfound influence to lever former Labour Minister Roger Douglas into the ministry. John Key said both before and after the election that he would not have ACT’s number three candidate in his ministry.

The Maori Party picked up an additional seat and now holds five of the seven Maori electorates. (Labour holds the other two.) Established as recently as 2004, the Maori Party wants to be relevant and influential. John Key has expressed a willingness to bring them into a coalition government, even though National does not need the Maori numbers. Obviously Key has an eye to the future, and would like to have a negotiating chip to counter ACT’s hard-right position. But a National–Maori coalition is a long-shot. It will be interesting to see how the Maori seats issue – National previously has wanted them abolished – plays out in any negotiations.

The Greens have built on their parliamentary performance with an increased party vote of 6.4 per cent (up 1.1 per cent). Although they will have an additional two MPs (up from six to eight), they would have been disappointed with their result, which was lower than three out of the four major polls from last week. They also lose their previous position of influence, and will have to perform well over the next three years to maintain the party above the 5 per cent threshold.

While Winston Peters’ New Zealand First performed creditably, with 4.2 per cent of the vote, the party is now out of parliament, neither reaching the 5 per cent threshold nor winning an electorate seat. The party’s best chance was Peters himself in his old seat of Tauranga, but he was thrashed by the National candidate, 57 per cent to 25 per cent.

John Key will meet with the leaders of ACT, United Future and the Maori Party over the next two days, with coalition agreements and the new ministry expected to be clearer in the next week. Defence minister Phil Goff is expected to replace Helen Clark as Labour leader.

The size of the parliament will increase to 122, to accommodate the Maori Party “overhang” (the party won more electorate seats than its party vote would provide on a proportional basis). Final results (including declaration votes) will be known within two weeks. Readers of my election preview last week will be interested to hear that the Bill and Ben Party polled 0.51 per cent, a creditable first-time performance. •

Norm Kelly, a member of the Democratic Audit of Australia who is completing his PhD on Australian electoral reforms at the Australian National University, now calls Wellington home.

Simon Westaway (left) and Vince Colosimo in Underbelly, which couldn’t be broadcast in Victoria after a court order earlier this year. Under Victoria’s Charter of Human Rights, corporations (including most of the media) cannot use rights arguments in court actions. 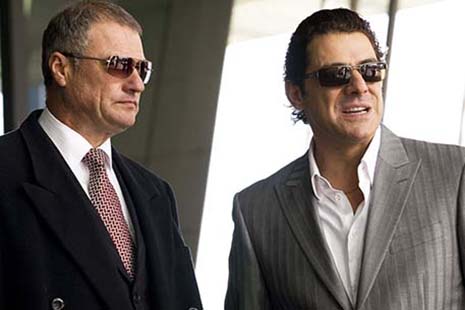 Simon Westaway (left) and Vince Colosimo in Underbelly, which couldn’t be broadcast in Victoria after a court order earlier this year. Under Victoria’s Charter of Human Rights, corporations (including most of the media) cannot use rights arguments in court actions.