A little jab, now and then 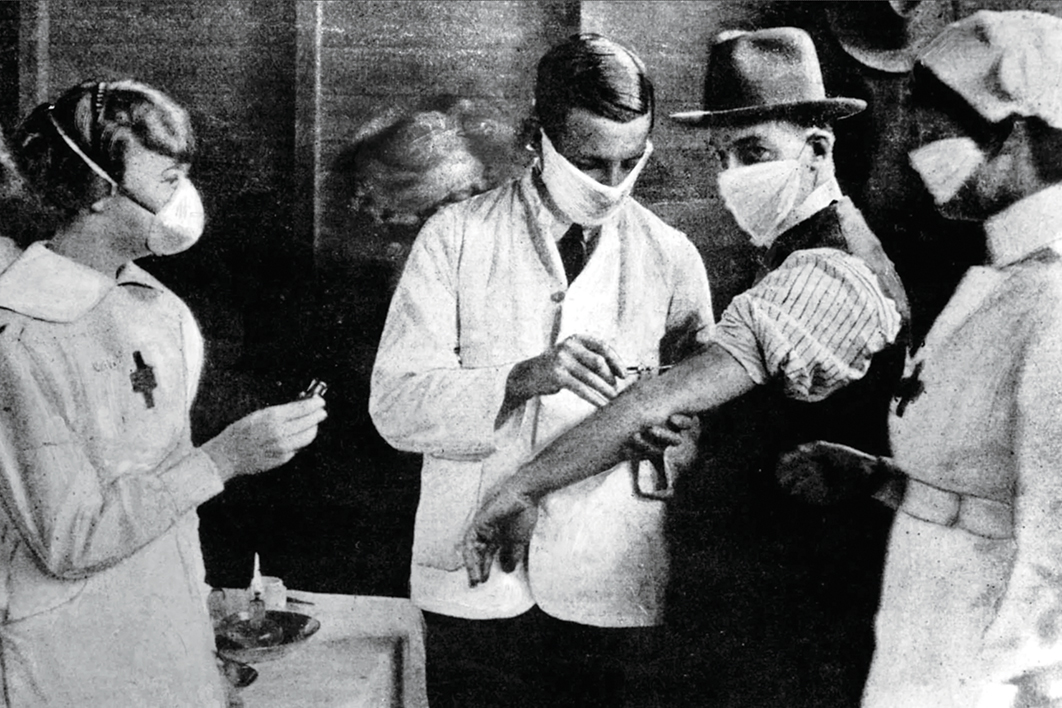 Heavy demand: inoculations in Sydney’s Hyde Park at the height of the Spanish flu in February 1919. Sydney Mail

Failures across a whole range of responsibilities — from quarantine and the regulation of aged care facilities through to vaccinations — have undermined confidence in both the government and prime minister Scott Morrison. Support for the government’s handling of the pandemic, as measured in the Guardian’s Essential Poll, has dropped from 53 per cent to 44 per cent, with Morrison’s approval rating, down from 57 per cent to 51 per cent, following a similar trajectory.

All is not lost for the government. The media bandwagon has changed gears in recent days and, possibly feeling pity for a regime so unable to present its citizens with clear public health messages, seems to have decided to take on the job itself. To take just one example: this week’s episode of Media Watch was largely devoted to countering the “beat-up” over AstraZeneca. It reported on other media but did so in a way that made it clear Paul Barry thinks we should stop worrying and learn to love the jab. It was essentially an op-ed.

The prospects for a government that can rely on help of this kind from the supposedly left-leaning ABC should not be written off. But it doesn’t deserve such help. The vaccination disaster is the worst national public policy failure in modern Australian history, rivalled only by Paul Keating’s early-1990s recession “we had to have.”

Australia will eventually complete its vaccination program — presumably, some time in 2022 — and it might even manage to do so without the loss of several hundred more lives to Covid-19. But the casual approach we have seen so far, especially in getting aged care workers vaccinated, means that we are far from out of the woods. Still, it is too easy to blame the nation’s vaccination ordeal on an incompetent government and its publicity-obsessed leader. There is more to it than the frailties of any particular government.

What we have seen in recent months is the workings of a hollowed-out national government. It has decent systems — run by the Australian Taxation Office and Centrelink — for shuffling money around, provided you are not a robodebt victim. It has some agencies that have been able to undertake their regulatory work effectively, helping to keep the economy going and supporting efforts to manage public health.

But when it comes to hands-on service delivery, the federal government now seems rather hopeless. It is incomprehensible that it placed so many eggs in the AstraZeneca basket; no explanation has ever been offered, and many journalists seem to have the attention span of a goldfish in such matters.

It was not always the case that federal governments were so distinguished by what they could not do. Writing a quarter of a century ago, the historian A.T. Ross showed that in the interwar period the federal government pursued a defence policy based on the development of a local capability in munitions production — called “self-containment” — so that Australia would not depend on overseas supply. At the heart of the effort was a Munitions Supply Board, established in 1921, which would provide incentives for companies to produce locally by funding research and development. It even set up government factories in priority areas, to pioneer complex production processes. Ross went so far as to argue that Australia was saved from invasion in 1942 by its industrialisation more than by the United States of America.

Those were the days when federal governments held the hose. There is an even more telling example for our own times: the Spanish influenza pandemic of 1919. The effectiveness of the government-led vaccination program is open to question, especially as it was another decade or more before flu was recognised to be viral rather than bacterial, but the ambition is worth recalling.

Even before the Spanish flu arrived in Australia, the Commonwealth Serum Laboratories — established as recently as 1916 — was working on a vaccine. CSL had collected sputum from returning soldiers who had already been exposed to the outbreak, and used agar — derived from a Japanese seaweed — to grow the bacillus. The vaccine comprised a mixture of chemically killed bacteria, some recovered from the deceased victims of earlier flu outbreaks.

By February 1919 CSL had already distributed more than a million doses, and orders arriving at CSL’s new Parkville premises were being met within twenty-four hours. CSL would eventually produce something like three million doses for a country with a population of only about five million. In Sydney, the Prince Alfred Hospital and the Royal North Shore Hospital were each making a vaccine. Nurses sometimes donated the blood needed to make the product. Vaccine depots were well patronised, and heavy demand did occasionally lead to shortages and the administration of part-doses.

There was some vaccine hesitancy, then as now, but certainly with more reason. The vaccine content was based on guesswork — which was wrong, as it turned out — and the needles were much bigger and really hurt. A Dr Joel, who reported “results which are nothing short of miraculous” for the CSL vaccine among the sailors on his watch as a naval doctor, gave the hesitators short shrift: “Conscientious objectors, if the legislature has not the courage to compel inoculation, should be isolated from the rest of the community, it being pointed out to them that we object not so much to their attempted suicide as to their carrying the disease unmitigated to those who are not tired of life.”

No extensive clinical trials were carried out; nor was there a rigorous approval regime. Governments didn’t need to worry whether one or two in a few hundred thousand recipients might get a blood clot. They did not have the political nightmare of the pink batts saga a few years behind them, a permanent reminder to government that if your efforts to save the country from a global crisis result in the tragic deaths of four citizens, that is all that anyone will recall. Citizens certainly won’t remember the million houses that were successfully insulated, or the carbon emissions reduction achieved. They won’t be convinced by arguments that workers are too often losing their lives on building sites yet no one calls a royal commission to investigate.

Some recent commentary suggests the CSL vaccine might have benefited recipients by boosting their immune systems. In a way, though, whether it worked or not is rather beside the point today. The scientists were operating in the context of extremely limited knowledge about influenza, and they did their best to protect the Australian people, with the rapidly rising capacities of a national government behind them.

The confidence of the Australian federal government of that era of nation-building is striking — as is the contrast with its low ambition and incapacity today, despite its vastly greater size and the massive material, intellectual and technological resources now at its disposal. We should all be alarmed by what the federal government has shown it cannot do — by its incompetence in both words and deeds — as well as by what the present occupants don’t regard as any of their business.

The lesson has relevance to much more than pandemic management. Is it any wonder that people are looking to state governments to protect them, and turning to nutters on the web for health advice? •

Frank Bongiorno is Professor of History at the Australian National University. His most recent book is The Eighties: The Decade that Changed Australia.