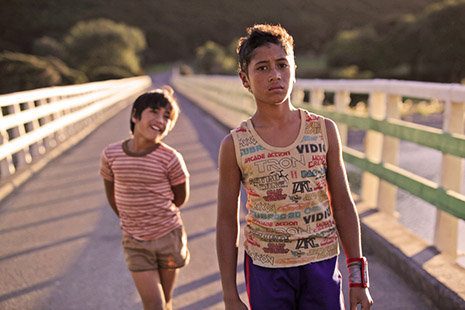 James Rolleston (above, right) and Te Aho Eketone-Whitu in Boy.

IF THE highly awarded New Zealand film Boy is screening anywhere in your neighbourhood, please go and see it; and having done so, spare a thought or three for the reasons why, so often, New Zealand feature films are stronger than Australian ones. Boy has been quite wrongly called a comedy; it is small-scale drama, deeply grounded in family and place, a struggling Maori community somewhere on the coast. There is a one-teacher school, a post office and store, and a dirt road leading over a hill to unknown worlds elsewhere. There is a robust grandmother (Mavis Paenga), who takes off one day to attend a funeral; the story unfolds in the few days that she’s away, and the brood of motherless kids, siblings and cousins are left to be managed, as far as he can, by eleven-year-old Boy. James Rolleston’s performance as Boy is a marvel of emotional range; he knows how to be fully present, mischievous, cheerful, pragmatic, and how to tune out and in when his father, a feckless crim, turns up and makes demands. He says his favourite subjects are art, social studies and Michael Jackson (the time is 1984). There is a little brother, Rocky, who thinks he has magic powers, and a tribe of highly believable kids around them; the girls have names like Destiny and Chardonnay.

Father is played by the writer and director, Taika Waititi; he creates a no-hoper who survives on fantasy. He is Alamein, taking up a legend of Maori troops in the second world war, and then he’s Crazy Horse and Shogun; alternately comic, pathetic, vicious and murderous, driven by unspoken guilt. He wasn’t there when Boy’s mother died in childbirth at twenty-two; he finds it hard to stay away from her grave, when he’s not terrorising the kids and spending time digging up a paddock in search of some ill-gotten loot once buried there. Boy’s fantasies have to do with Michael Jackson’s dancing, and the hero he wishes his father could have been; but it is very clear, by the time the grandmother returns to take over, that his grip on the real world is a lot more certain than his dad’s. Rocky is equally sane. The film beckons toward faith, in them and their kind at least. There’s no softening of the general outlook, and no long-term rescue in sight for the community.

There are certain affinities with Samson and Delilah, and as in that notable case I hear problematic audience responses; people saying, But it’s so bleak. I can’t see that either film is bleak; what they are is tough, and truthful about indigenous lives. In its own country Boy has been a box-office winner, doing even better than Whale Rider and Once Were Warriors. That rewards the confidence that is palpable in its making: a confidence that the storytellers are actually talking to someone, that the audience is there. New Zealand film-makers, I’ve heard it said, know who and where they are; they are absolutely not working with one eye looking anxiously toward America, or to accredited international art-cinema models. They are highly conscious of the lines of connection between story and audience: biofeedback, if you will.

There is also a very long inheritance; contemporary New Zealand cinema hasn’t come out of nowhere, and there were decades when film-making was virtually all pakeha, white New Zealand’s, with Maori players either invisible or else in marginal roles. From the 1960s on, indigenous political and cultural activism gathered strength; Merata Mita (1942–2010) more than once told the story of how, when TV began in New Zealand, “the face of white New Zealand beamed self-consciously at us, tight-lipped and humourless… [while] Maori… would find themselves practically nonexistent on either side of the camera… We were offered no choices, given no alternatives; television made us invisible.”

It was, as she tells it in several articles, a long struggle from then on, from the occasional, concessional inclusions of Maori in mainstream films and series to a point where the film and television industries are something closer to bicultural in both control and content. In the end-credits in Boy, Merata Mita is credited with a role in production; Taika Waititi acknowledges her as a powerful mentor and friend. After nearly four decades of activism for Maori and Maori film – teaching, writing, producing and directing, mentoring and parenting – she died suddenly in May. She had projects in process, and was working on a documentary on child abuse for Maori TV in Auckland; emerging from the studio, she collapsed on the steps. It was, they said, a good death for a film-maker.

There are at least three films of Merata Mita’s that we should all see and know about. Her own favourite, and it’s splendid, was Bastion Point: Day 507, the documentary diary of a massive, and eventually successful, Maori protest against development on land already ceded to indigenous people. Then, most indispensably for those concerned with the retrieval and circulation of archival film and the understanding of film in history, there’s the great Mana Waka, the story of the building of ceremonial canoes in 1940 for the centenary of the Treaty of Waitangi. For that one, Merata Mita disclaimed directorial ownership, though it was she who orchestrated the film’s disparate elements; she said it really belonged to the late Princess Te Puea Herangi, who had instigated the original filming in the late 1930s. There was never money to finish it then, and the amazing footage languished until Mita took on its reorganisation, completed in 1990.

Her best-known film is Patu! which documents New Zealand protests, Maori and pakeha alike, against the all-white Springboks tour of 1981; over nearly two months early in that year, thousands hit the streets in Auckland, Wellington and Christchurch. It’s a film that roars with life. Bringing South Africa’s institutionalised racism into the frame with New Zealand’s, it marked a new, decisive stage in political and cultural history, setting race relations, irreversibly, in the centre of the national screen. With Patu! I and others had a wry kind of luck; we saw it in what was still Bjelke-Petersen’s Brisbane, a town with vivid memories of its own protests against the Springbok tour of 1971. On that occasion the deeply reactionary premier had declared a month-long state of emergency; social division – never far from the surface in that town and state – had boiled over repeatedly, and hundreds of the best people had found themselves in jail. Watching Patu!, a dozen years on in 1983, we were of course in a small cinema; but with good reason, that Brisbane audience took noisy ownership of the film and its politics.

Vale Merata. A retrospective is called for; I hope the film festivals and our scattered cinematheques are listening. Meanwhile I recommend Film in Aotearoa New Zealand, edited by Jonathan Dennis and Jan Bieringa (Victoria University Press, 1992). •

Each man was an island

Glenn Nicholls reviews the German-language edition of Herta Müller’s latest novel, Everything I Possess I Carry with Me 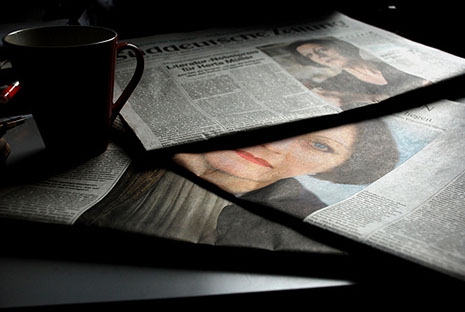