Why was a successful scientist and gifted artist airbrushed out of history? 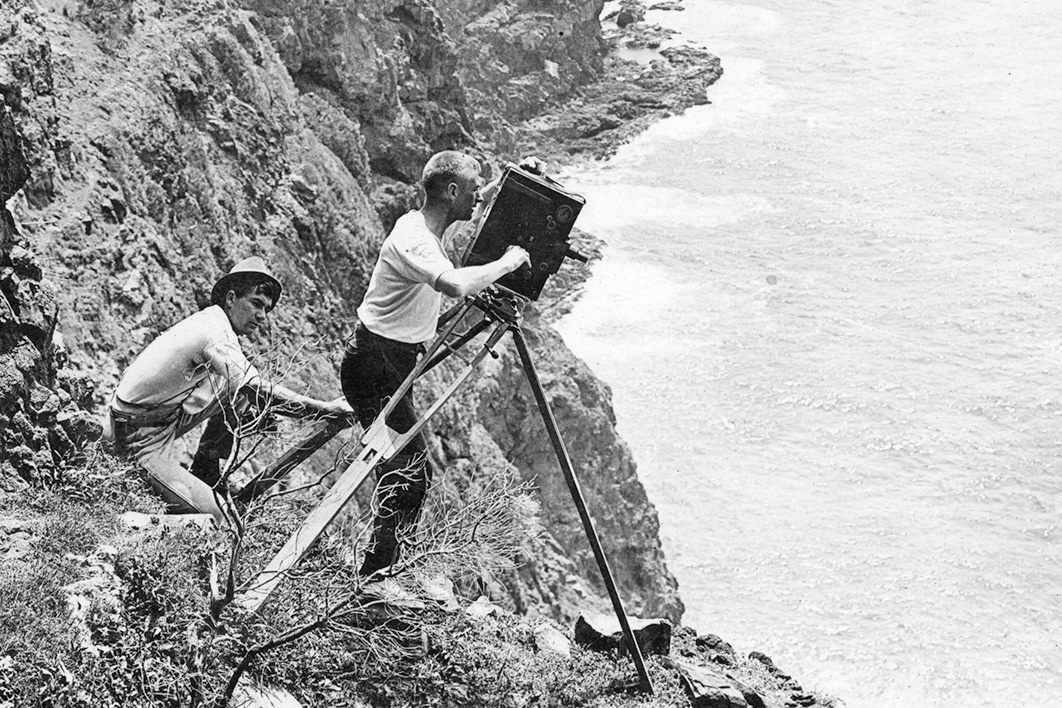 Museums are something of a museum piece these days. And none more so than the Australian Museum, the sandstone behemoth on the edge of Sydney’s centre, founded in 1827 and thus approaching its bicentenary.

Like its model in London — the British Museum, which opened in 1759 — it was a flower of the Enlightenment. Its role was twofold: to explore, classify and exhibit the peculiar animals and plants of the Antipodes, and to document the peoples newly encountered by Europeans.

As became the notorious case for the British Museum and its counterparts in France and Germany, colonialism and settlement accompanied and aided the collecting of specimens. By the time the Australian Museum got into its stride in the second half of the nineteenth century, Voltaire’s “noble savages” had been overtaken by evolutionist attempts to rank human subspecies. As Brendan Atkins observes in his compact but panoramic new book, The Naturalist: The Remarkable Life of Allan Riverstone McCulloch, “Darwin’s theories became evil in the wrong hands, as they drew conclusions about racial superiority from bone measurements.”

Atkins’s subject is a little-remembered scientist whose brief but highly productive career covered both natural history, brilliantly, and ethnography, more controversially. McCulloch started work at the high-water mark of evolutionary theory and colonialism, and ended just as broadcast media was beginning to challenge and rival the static collections of museums.

Allan Riverstone McCulloch was the great-grandson of Scottish Radicals transported to New South Wales in 1820 for demanding universal suffrage, lucky not to be hanged and beheaded like their two leaders. The family flourished, with a grandson becoming a member of NSW parliament and a land developer, a symbiosis that continues to plague the state. McCulloch’s middle name derives from this uncle’s greatest deal, the subdivision of an estate that became a Sydney suburb.

When his uncle went bankrupt “he did what any gentleman would do in the circumstances: he fled the colony.” This left McCulloch’s widowed mother without much support for herself and her four children. At age thirteen, through family connections, Allan was placed as an unpaid cadet in the Australian Museum, apprenticed to Edgar Waite, the curator of vertebrates.

It was the start of a deep education within the museum and on expeditions with Waite around the coast, islands and waterways of Australia. McCulloch became a world-leading fish biologist and, with the help of artistic training from Julian Ashton, a superb illustrator of his specimens.

His public lectures, livened by lantern slides, were packed. The Latin tag for the Murray cod includes his name. Just before his death in 1925 he had written a script for the newly introduced radio and was using a movie camera to document wildlife on Lord Howe Island. In more modern times, he would have been a local David Attenborough.

Atkins, who trained as a zoologist himself and then, after a career as an environmental scientist on the Murray, edited the Australian Museum’s magazine, was intrigued by McCulloch’s story. Why was such a successful scientist airbrushed out of the museum’s history, snidely derided in its 150th anniversary history, and still occasionally subject to rumours he was syphilitic or a drunk sipping on his own preservation alcohol? (The latter transgression was by an earlier curator.)

The Naturalist circles towards its unhappy end in chapters focused on McCulloch’s artistry, his work on fishes and his ethnographic asides. It was in the latter, Atkins thinks, that “cracks first appear in McCulloch’s persona.” Visiting the Torres Strait Islands in 1907, he and senior colleague Charles Hedley were primarily collecting fish and shells but had also been asked to augment the museum’s collection of Indigenous artefacts.

Already, the locals were making artefacts for sale to visitors rather than for their own use. Seeking more original objects, the scientists went to a hidden grave on Nagir Island, where their delving in the dirt revealed a model of a bird made from turtle-shell plates sewn together with split cane. They smuggled it out.

Much later, in 1922, McCulloch accepted an invitation from photographer Frank Hurley to join an expedition into the remote waterways of the Papuan Gulf, Fly River and Lake Murray. One of McCulloch’s roles was to relay Hurley’s accounts of his daring exploits by Morse code to a sponsoring Sydney newspaper. Atkins recounts more dubious acquisitions, some by outright theft, others by purchase under intimidating circumstances from village elders who would not normally allow strangers to see, let alone take away, their sacred objects.

McCulloch and Hurley sent one shipment of this plunder back to the museum without the Papuan administration’s knowledge when they sailed their ketch Eureka directly to Thursday Island, an Australian territory, for repairs. A larger second shipment was impounded at the Papuan port of Daru after a missionary recounted Hurley and McCulloch’s frank admissions of their collecting methods.

An aggrieved Hurley kept up an acrimonious public correspondence with Papua’s governor, Sir Hubert Murray. But McCulloch’s notes, included in the second shipment, revealed feelings of guilt about the acquisitions. The shipment was eventually released to the museum, with a few confiscations, and Hurley gave up his protests.

McCulloch was to “take the fall for these thefts,” Atkins says. Soon after he returned to Sydney in 1923, wracked by dysentery and malaria, a fight erupted at the museum. Two powerful trustees appointed by the state government, auditor-general Frederick Coghlan and businessman Ernest Wunderlich, decided the place needed to be more popular.

They ordered the museum’s scientists to curb their expensive research and get out into the suburbs and country towns to spread their knowledge. On a pretext, they dismissed the senior-most scientist, Charles Hedley. Two eminent scientific trustees, professors Edgeworth David and William Haswell, resigned in protest, but to little avail. “Now with Hedley gone, the trustees took aim at McCulloch,” writes Atkins, “who had by default become their most senior scientist and star curator.”

In May 1924 an invitation came for McCulloch to deliver a paper at a big scientific conference in Hawaii on the Pacific’s food, agriculture and fisheries. Coghlan and other trustees voted against his attendance. It was a devastating blow to McCulloch, still reeling from illness and with his battering over the Papuan artefacts worsening his tendency to bouts of depression. After he suffered a breakdown in early 1925, he was given a year’s leave on half-pay. Respites on his beloved Lord Howe Island helped a patchy recovery.

At this point a former NSW premier, Joe Carruthers, stepped in. He was going to Hawaii, and persuaded the state government to pay half of McCulloch’s expenses to go along and attend another conference, this one focused on fisheries.

There, McCulloch found the event still vaguely in the planning stage. But he wrote a paper, was invited to give talks, and enjoyed the company of local figures while waiting for proceedings to begin. It seemed like a turning point. A proposed Pan-Pacific institute wanted him as chief scientist. After a long bachelorhood, he had fallen in love with a woman, Jean Innes, on Lord Howe. Yet he was still disturbed in mind and unable to sleep.

In a poignant chapter, Atkins delves in great depth into the feelings of regret and self-reproach that might have deepened McCulloch’s mood swings, and reaches a tentative diagnosis of bipolar disorder, or manic depression as it used to be called.

On his death, McCulloch was lauded as a great scientist. But no church in Sydney would bury a suicide. His friends at the museum raised funds for a granite monument on Lord Howe Island’s seafront, facing the reef he had explored, and buried his ashes beneath it.

Coghlan’s arrogance in a non-museum matter got him removed from office and the museum celebrated its centenary amid reports of internal disorder. It was not until 1975 that new legislation removed outside trustees and put scientific and professional directors in charge.

Conflicting pressures of popularity and science remain. The Australian Museum is currently hoping for a record million-visitor milestone this year on the back of a Lego dinosaur exhibition and another featuring fibreglass sharks. It’s no doubt true that schools and parents are less likely to bring their kids to another exhibition showing how the land snails of Norfolk Island have been rescued. Science is now more likely to deal with the gloomy subjects of species extinction and climate change, while ethnology turns to revisionist accounts of colonialism, turning the concept of “savagery” around.

Since at least 1981, when a large timber slit-drum was returned to newly independent Vanuatu, the Australian Museum has been returning objects to traditional owners, mostly in quiet fashion. But the turtle-shell bird stolen by McCulloch and Hedley from the grave on Nagir Island is still in the collection. In June this year, in the village of Usakof on Lake Murray, I found villagers demanding the return of “powerful objects” stolen by Hurley and McCulloch from their longhouse in 1922.

The museum is now readying a new Pacific gallery to be opened next year. It would be wonderful if this could be accompanied by a more visible examination of its vast holdings of Oceanic objects, mostly in off-site storage, with objects taken in less scrupulous times identified and their disposition with their communities of origin discussed.

It would be satisfying, too, to see McCulloch’s wonderful watercolours of fish made available as prints and his surviving dioramas of sea and birdlife accorded heritage status. Yet none of the museum’s senior directors turned up to the launch of Atkins’s book, which is nonetheless a fine memorial to this outstanding Australian. •