A party on the edge

A strategy exists to revive UK Labour’s electoral fortunes, but would it work? 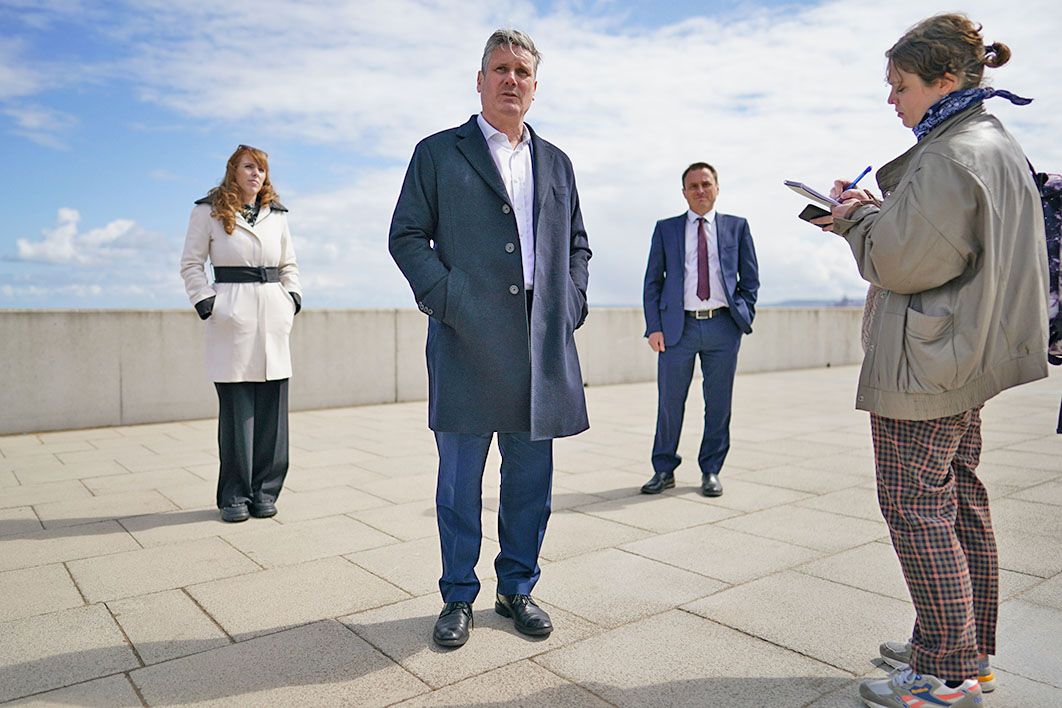 Labour Party leader Keir Starmer (centre) campaigning on 1 May in the traditional Labour seat of Hartlepool, which the party lost at a by-election five days later. Ian Forsyth/PA Wire

Suddenly, Britain’s Labour Party has become interesting again, though not for the reason its supporters would wish. Battered by the voters, well behind in the polls, and provoking a coruscating 3000-word assault from its most successful leader, Tony Blair, the party is undergoing something close to a collective nervous breakdown.

This is obviously important for British politics, but it also has wider relevance. Labour’s crisis flows from challenges facing progressive parties around the world. Indeed, there are clear parallels between Britain and Australia: in both countries support for Labour/Labor peaked at around 50 per cent in the early 1950s; both parties performed much more poorly in national elections in 2019; and both parties recorded (first-preference) support of just 33 per cent that year.

Despite many obvious differences, both countries — along with many others — have seen massive economic and social changes in recent decades. The question for progressive parties is fundamentally the same everywhere: how do they revive their appeal to voters in the twenty-first century when conditions are so different from those that enabled them to build their appeal in the twentieth century?

Much of Blair’s broadside, in the left-of-centre New Statesman, inevitably dealt with the specifics of Labour’s recent past, especially the failings of its lurch to the left in 2015 when it elected Jeremy Corbyn as leader. After Corbyn led Labour in 2019 to its worst general election defeat since 1935, the party elected Sir Keir Starmer, a far more centrist leader. (Starmer received his knighthood for his time as director of public prosecutions, a senior non-party legal position to which nobody with extreme political views would ever be appointed.)

But Blair cast his net more widely: “Joe Biden’s victory in the United States apart, progressive politics across the globe is badly placed: four election defeats for the UK Labour Party and no one betting against a fifth; the German SPD placed behind a moderate Green Party; the French Socialists, who won the presidency in 2012, now polling at 11 per cent; the Italian left imploded and divided; the Spanish and Swedish socialists hanging on to power, but way below their earlier levels of support… Around today’s Western world there are only flickers of a progressive agenda with deep majority support.”

What, then, is to be done? Here are some of the key numbers that illuminate Labour’s dilemma in Britain. Those numbers will vary from country to country, but the broad direction of change is likely to have been much the same in most of the world’s better-off democracies.

Until the 1980s, more than two-thirds of Britain’s workers had manual, blue-collar jobs. They and their families provided Labour’s core vote. The party’s typical voter was a trade union member working in a coalmine, a shipyard, a steelworks, a mill or a large factory. The term “identity politics” has recently come to prominence, but the concept is not new: Labour’s core vote was as much to do with working-class identity as living standards. Rooted in solidarity, it gave Labour huge majorities on large turnouts in its industrial heartlands.

Today, the mines are gone, the shipyards closed, the steelworks shrunk, the factories automated and the mill jobs exported to Asia. Manual workers now comprise just 43 per cent of the workforce, and only a minority of them belong to a trade union. Gone is the widespread workplace culture that fostered the values of solidarity. At the last election, blue-collar voters divided six million Conservative, four million Labour.

On the other side of the scale, Labour has gained ground among white-collar voters. Until the 1980s, around 80 per cent of Labour’s vote was working-class; that proportion has since halved to 40 per cent. Today’s typical Labour voter is a white-collar social liberal, living in or around a big city and working in health, education, finance, technology or public administration.

In a way, these big, long-term changes are good news for the left, for it is capturing a growing share of a growing demographic. But two problems block the path to electoral triumph. The first is that its appeal to working-class voters is declining too fast. In England’s industrial heartlands, Labour has lost dozens of once-safe constituencies to the Tories.

The second problem is that Labour’s support has begun to fray among middle-class social liberals. In local and regional elections earlier this month, the Greens made gains in big cities at Labour’s expense. In other countries, this trend has gone much further. In Germany, the latest polls show the Greens with 25 per cent support, level-pegging with the centre-right Christian Democrats. Support for the Social Democrats has collapsed from 39 per cent in 2002 to 15 per cent ahead of this September’s election.

Germany provides a stark warning to Britain’s Labour Party — and centre-left parties around the world — of what can happen if things go badly wrong. As a broad rule, progressive parties need an alliance of working-class and middle-class voters to gain power. Historically, Britain’s Labour Party offered its working-class base a better life in a series of practical ways: through better housing, healthcare, schools, pensions and so on.

At the same time, it attracted middle-class voters who approved of that instrumental agenda but were passionate social liberals as well. Post-1945 causes such as abolishing capital punishment, legalising abortion and gay sex, and outlawing racial discrimination were adopted by successive Labour governments. Labour’s white working-class voters didn’t generally care for these policies, but, on the whole, they didn’t mind Labour MPs’ promoting them, as long as the party delivered practical improvements to everyday life.

An occasional exception was race and immigration, which in some places in some elections cost Labour working-class votes. In retrospect, those localised battles in the 1960s and 1970s provided an early warning of what has happened in the past few years.

Brexit has fractured Labour’s working/middle-class alliance. Whereas the social liberal agenda used to be irrelevant but unthreatening to Labour’s working-class base, it is now blamed by many traditional Labour supporters for the stalling of their living standards in recent years. “Brexit” is not just a huge event; it is a label that encompasses a wide range of resentments: the power of Britain’s elite and metropolitan liberals as well as specific features of Britain’s membership of the European Union, such as freedom of movement, which led to a sharp rise in immigration.

Today, then, Labour faces a challenge specific to Britain in its detail but universal in its fundamentals: how can it reconstruct the alliance across classes that it needs to return to power? Can it retain its socially liberal middle-class voters while winning back the working-class voters it has lost?

Squaring that circle won’t be easy, and might even be impossible. If it can be done, it will be through instrumental policies for a post-industrial era that improve lives in the rundown towns that have turned away from Labour, combined with a form of social liberalism that helps every part of Britain, not just the thriving cities. This means making the practical, and not just moral, case for three main efforts: revising Britain’s flawed Brexit deal with the European Union; creating an immigration policy that helps the economy without undercutting incomes or job opportunities for low-paid workers; and accelerating the switch to a low-carbon economy.

Here’s the rub: nobody can be sure that such a strategy will succeed. But it might be the only strategy that has even a chance of success. As Blair says in his New Statesman article, tackling the economy’s “most far-reaching upheaval since the nineteenth-century Industrial Revolution… is the central political challenge of our time.” In Britain, as elsewhere, the big decisions that progressive parties make (or avoid) in the next few years will determine whether social democracy has a bright future or merely a glowing past — whether it improved lives in much of the world in the second half of the twentieth century but turned out to be unable to compete successfully in the twenty-first. •

Peter Kellner was Chairman of YouGov from 2001 to 2007 and then its President until 2016. A former Political Editor of the BBC’s Newsnight, he has written for the Times, the Sunday Times, the Observer, the Independent, the New Statesman, Prospect and other publications.