A place of greater safety 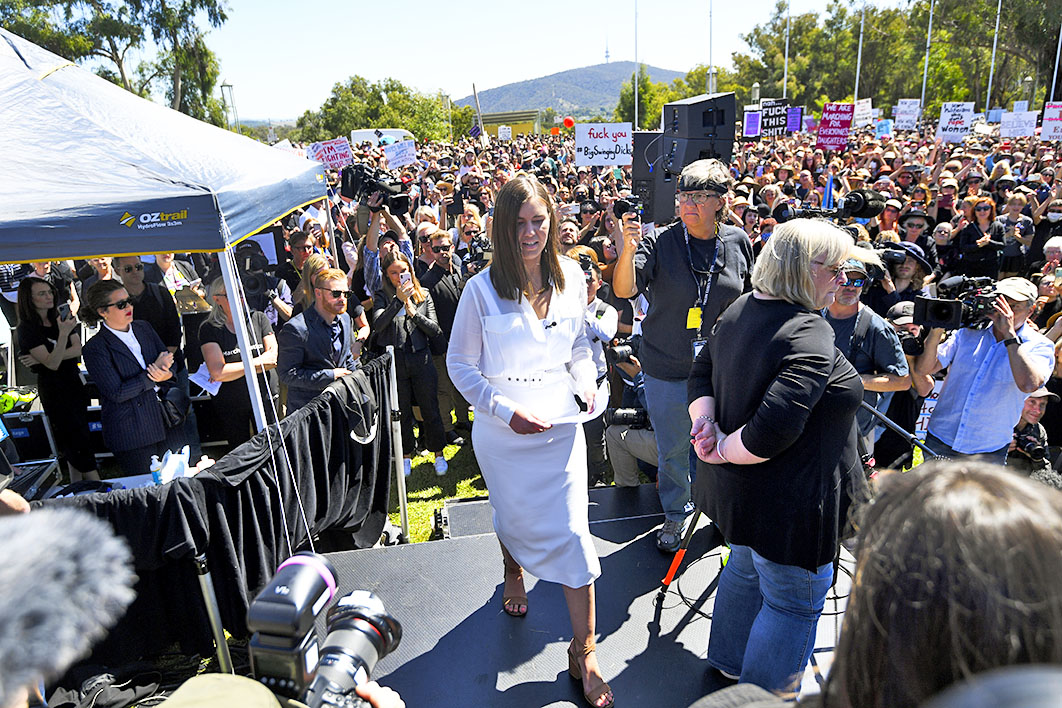 “I do believe we’ve all been called a mob.” ACTU secretary Sally McManus got an easy laugh for this opening gambit when she addressed the Canberra March 4 Justice yesterday. The thing about mobs, she said, is they’re assumed to be angry, faceless and directionless. She refuted the description with a stirring insistence that the event was an affirmation of direction and purpose. “We can’t stay still. We will change the world. That is what we are going to do.”

By the time McManus took the podium, the crowd on the lawn before Parliament House was well primed. If it was anger that brought them together, a sense of common purpose was to the fore. Host Julia Zemiro kept the mood buoyant, emphasising the diversity of the assembly and the fact that this was in every sense a “safe” gathering, albeit one too risky for the prime minister to front up to.

After a gracious welcome to country from Aunty Violet Sheridan, Tjanara Goreng Goreng, a Traditional Owner from Central Queensland, spoke further about the importance of Capital Hill as ancient ceremonial ground and called for attention to “the quiet stillness of our country.” She evoked the principle of deep listening, and as they listened to her, those who had come for a protest march more closely resembled a mob in the Aboriginal sense of the term, a collective bonded by fundamental commonalities.

Not that anger was left out of the equation. According to march organiser Janine Hendry, the rollout of protests across forty cities was “an outpouring of rage about gendered violence.” Saxon Mullins, who heads a sexual assault and advocacy centre, spoke of lives stolen by years of trauma. Ballarat lawyer Ingrid Irwin appeared in a gown and wig to denounce a criminal justice system that fails to give sexual assault victims the right to a lawyer. Madhumitha Janagaraja, president of the ANU Students’ Association, introduced herself as an abuse survivor and emphasised the increased risk for those with disabilities in a system that is “not on our side.”

Canberra journalist Virginia Haussegger appeared with Biff Ward, founding member of the Canberra women’s liberation movement, whose proclamation, “It feels like a tidal wave of rage out there,” appeared in headlines a few hours later. Katharine Murphy, writing in the Guardian, declared that “voices raised in anger are echoing through the land.” The rage factor commands attention, and has certainly captured the imagination of journalists.

Soon after Ward finished speaking, Nine correspondent Chris Uhlmann took up a position at the upper end of the lawn, overlooking the march, and commenced a report to camera with the words, “Rage outside parliament is washing over politics.” The camera operator stopped him. “There’s no rage,” he said, gesturing towards the crowd which, shortly before, was illustrating Ward’s pronouncement very effectively. “Got to wait for the rage,” he added. And so they waited. The crowd, however, didn’t oblige. Those gathered were listening in deep silence to Brittany Higgins, who, battling to maintain her composure, had made an unscheduled appearance “out of necessity.”

Brief bursts of clapping and other sounds of encouragement punctuated her speech, but these were quiet moments, and the quietness itself was perhaps the most important message of the day. Sometimes you have to just listen. The three generations brought together in this crowd harboured reserves not just of rage, but also of generosity, social maturity and moral intelligence.

Little of that was on display inside Parliament House when, as the marchers dispersed, the government assembled for question time. Forced to acknowledge what was happening outside, prime minister Scott Morrison embarked on a waffling address full of double negatives (“this is not to suggest that good faith and genuine efforts are not being made”) and vacuous parentheses (“I would hope”; “… as it has, until now, and I hope into the future”). This was ready ammunition for opposition leader Anthony Albanese, who remarked that Morrison was displaying “not so much a tin ear as a wall of concrete.” There followed a succession of opposition questions drawn from statements made by Brittany Higgins.

Those on the government frontbench may have looked somewhat uncomfortable, but not acutely so. Here they were, in their place of greater safety, and for every challenge from across the floor there came a question from its own ranks about the marvels of the current economic recovery, to which Morrison and Josh Frydenberg responded with all the impassioned conviction that was entirely missing from the government’s responses to the urgent and fundamental demands for social justice delivered on its doorstep.

So what are we left with, after this extraordinary day of reckoning? Not much, if those at the rallies walk away carrying the burden of what is now a tired old adage about maintaining the rage. In an insightful article about rage and the rise of the women’s movement, Haussegger quotes American writer Soraya Chemaly confronting the question of “what to do with all this rage?” When properly understood, she says, it is “an outstandingly clarifying emotion.”

Some of the turning points of political history are marked by the surging of rage as a clarifying moral force, others by the blind rage of mob violence, as evoked in A Place of Greater Safety, Hilary Mantel’s chronicle of the French Revolution. It’s doubtful whether fear of the latter really lurks in the hearts of our leading federal politicians. They know they are safe at work, and they know the women gathered outside Parliament House acted in a spirit at the opposite end of the spectrum from the sentiments that prompted Trump supporters to storm the US Capitol on 6 January.

The image of Uhlmann standing on a wall outside Parliament House waiting for the rage is strangely appropriate. Rage is not the heart of the story here. The new generation of protesters is asking, first and foremost, for safety. But their sense of being under threat is caused, as Grace Tame so cogently insists, by a chronic imbalance of power. Rather than maintain the rage, perhaps we should adopt another old adage: “Don’t get mad, get even.” That might be done effectively if half a dozen of the impressive speakers who fronted the marches around the country ran for federal seats, swelling the ranks of brilliantly effective female independents in parliament so as to hold the balance of power. •

Drawing history into the present

Victoria takes up the challenge of truth-telling 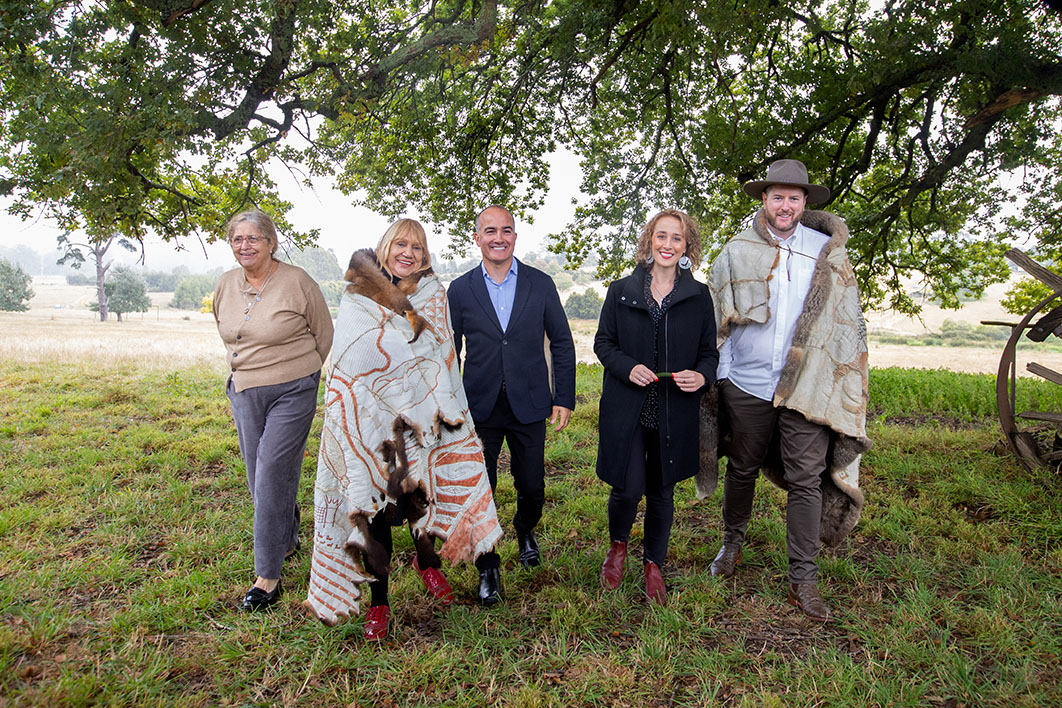