A play that came in from the cold 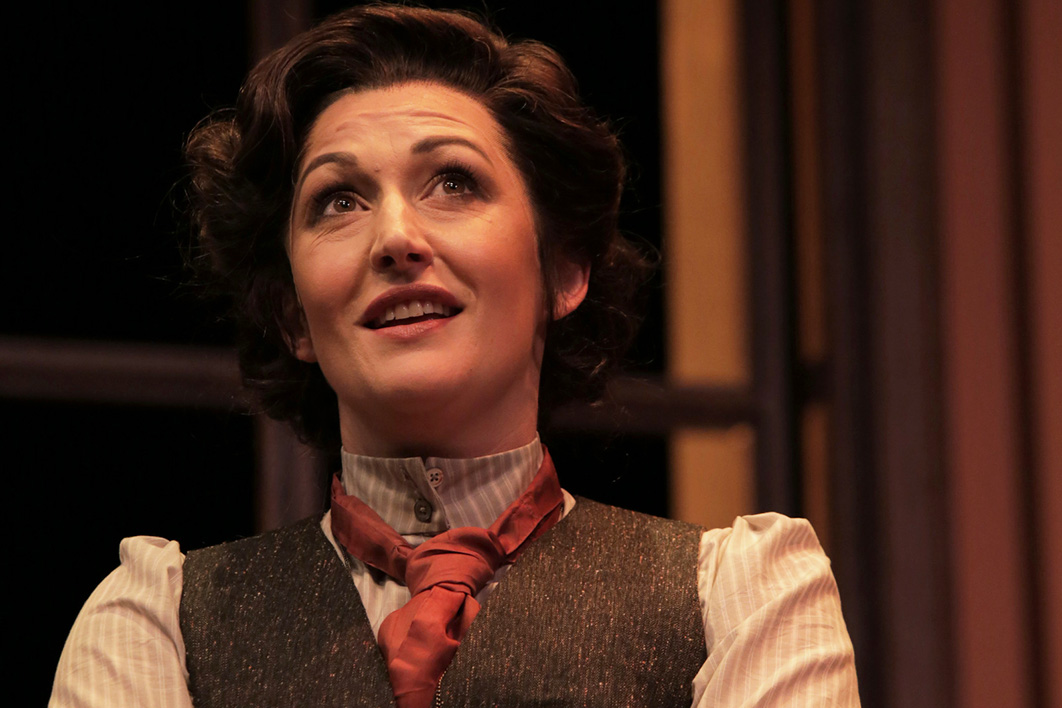 Energy and charm: Celia Pacquola as Jenny Milford in The Torrents. Philip Gostelow

Walking into the Opera House Drama Theatre to watch The Torrents, the audience first sees a red curtain. Nothing unusual there. What is different — and delightful — is that playwright Oriel Gray’s name appears in neon lights in front of the curtain. I was unexpectedly moved by this long-delayed recognition of a writer who would have been astonished, and thrilled, to find her play performed on the main stage by one of Australia’s largest theatre companies, more than sixty years after it was written.

“I thought that this was it. But it wasn’t,” Oriel Gray once remarked of her most famous play. Back in 1955, she had been delighted when the play was proclaimed the joint winner of that year’s Playwright’s Advisory Board competition, and she could have been forgiven for imagining that The Torrents would transform her career. She was living in a tiny cottage in Melbourne with her partner, journalist John Hepworth, and her three sons. Arriving home with a bottle of sparkling burgundy to celebrate, Hepworth told Gray to “enjoy this day — make the most of it. You know that when they start to produce it, there’ll always be things to be changed, you’ll worry and get doubtful.”

Yet she had good reason to worry, for she had the great fortune, and misfortune, to share her prize with another playwright, Ray Lawler. Their works were forever compared, and Gray always suffered in the comparison. Lawler’s play, Summer of the Seventeenth Doll, premiered at the Melbourne Union Theatre in 1955 and was hailed as the beginning of a truly “dinkum” Australian theatre. A melancholy drama about two barmaids and their cane-cutter boyfriends, the play’s working-class setting, dry humour and devastating ending enthralled Australian theatregoers. The Doll’s success is regarded as a founding moment in our theatre history, and the play is still regularly performed and studied in schools.

The Torrents enjoyed none of The Doll’s success, and it was my curiosity about why this was the case that sparked my PhD research on Australian female playwrights of the 1920s through to the 1960s. Oriel Gray was part of a cohort of dramatists, including Mona Brand, Dymphna Cusack and Betty Roland, who were active members of Australian theatre culture. Drama, like most forms of Australian culture, has long been evaluated in nationalist terms, and calls for a “national theatre” featured in public discussions of Australian playwrights and their work across the twentieth century. But in the era before government subsidy of the arts, this was always more an aspiration than a reality. Until the late 1960s, Australian theatre was largely the preserve of amateur companies. Many dramatists also wrote for radio and, later, television.

Oriel Gray’s career is emblematic of her generation’s experience of playwriting. Born in Sydney in 1920, she joined both the Communist Party and the New Theatre in 1942. At the New Theatre, she wrote and performed agitprop sketches and plays for the theatre, including a popular adaptation of Henry Lawson’s stories, Lawson (1943). She described her plays as humanist rather than communist, recalling that whatever she wrote, “the audience was there at New Theatre waiting to love it.”

Gray left the New Theatre and the party in 1949, increasingly chafing at the strictures she felt the party imposed on her work. Her subsequent plays continued to explore prejudice and racism, to considerable acclaim, but with a growing focus on individual conscience and belief. Reviewing Gray’s 1950 play Had We But World Enough, the critic L.L. Woolacott described her as “one of the most significant and talented Australian playwrights whose work has so far been produced here.” By the time she won the 1955 competition, she had written twelve works for the stage.

The prize arrived just when the Australian Elizabethan Theatre Trust was looking for local plays to support. A play about cane-cutters, set in present-day Melbourne, was a more likely candidate than one about a “new woman” journalist in the 1890s, especially one written by a woman who was not only a former member of the Communist Party but also living in a de facto relationship. The cold war made any association with communism problematic; the desire to create an Australian theatre free of the taint of amateurism ruled out many theatres and writers from serious consideration.

Summer of the Seventeenth Doll won the praise of local critics, travelled successfully to London, and was even made into a film. As theatre historian Campbell Howard commented in 1995, “luck played a great deal in the success of The Doll. In fact, if I were Ray Lawler I would never henceforth take a ticket in Tatts. One does not get two lucky breaks in a lifetime.”

If Lawler was lucky, Gray was not. She was anxious to secure a professional production for The Torrents that could match The Doll. This proved elusive and the play eventually premiered at the Adelaide New Theatre in 1957. By all accounts, it was a disaster. A subsequent Melbourne production fared almost as badly, with the Age describing it as “barely adequate.” At every turn, The Torrents was compared unfavourably with The Doll: in 1962 a reviewer observed that the play had “had nothing like the production success of The Doll. Nor, one may make bold to say, will it.” Apart from a radio adaptation in 1956 and an ABC television production in 1969, it was neglected for decades.

It is for this reason that the current season, a co-production between the Sydney Theatre Company and Western Australia’s Black Swan Theatre, is so exciting. The production succeeds because it takes the play on its own terms, unlike the only other professional production, by the State Theatre of South Australia, in 1996. There, the director and designer’s lack of faith in the play was revealed through clumsy staging: Jenny Milford’s “new woman” was dressed like a 1950s secretary (to signify her role as a change agent, as if that wasn’t clear from the text), and she even introduced a computer to her boss at the play’s close. The Australian claimed that “plays like this give Australian playwriting a bad name.” Oriel Gray told me she had been “so thrilled at the idea of a decent production of it… and really it has finished me.”

For the current production, director Clare Watson and dramaturge Virginia Gay have given the play the workshopping it needed to come to life. Gray herself knew that it needed more work, telling her son in 1995 that it was “a great big, cumbrous, old-fashioned load of get-out.” Summer of the Seventeenth Doll was extensively rewritten before its premiere; only now has The Torrents received similar scrutiny. The play’s ending has been reworked, some of the longer speeches have been pared back, and a new scene between the two female characters added, all of which improve the play.

The production draws on the energy and charm of Celia Pacquola, an accomplished stand-up comic and television actor making her stage debut. In this production, she introduces the play as herself, recounting the story of how The Torrents won a prize. She goes on to state that it is taught in schools across the country and has had over 1000 productions. She suggests that The Torrents is right up there as a national symbol with Southern Cross tattoos and the Bunnings sausage sizzle. She’s stretching the truth, of course, but the sly reference to Summer of the Seventeenth Doll — without ever naming it — establishes the stakes of the production.

While The Torrents never matches The Doll for drama and impact, this production draws out the play’s gentle comedy and progressive politics. The play is set in the 1890s, in the office of a newspaper in the (fictional) goldmining town of Koolgala. The town is prosperous, but idealistic engineer Kingsley Myers is concerned about what will happen when the gold runs out. He proposes an ambitious irrigation scheme to reorient the economy to agriculture, but vested interests, personified by the boorish John Manson, seek to stymie the scheme.

Pacquola’s character, Jenny Milford, has successfully applied for a job at the paper as “J.G. Milford,” much to the horror of Rufus Torrent, the paper’s editor. Rufus’s son Ben, a journalist like his father, is weary of living in his father’s shadow and unenthusiastic about marrying his fiancé Gwynne. With the drama set up, the play moves briskly: Jenny proves herself, keeps her job and works with Ben to publish an editorial in support of Kingsley’s irrigation scheme. Manson, the paper’s investor, is furious, but as the play ends, Rufus Torrent has located his conscience, Ben has found his independence, and Jenny has earned the admiration of all.

Summer of the Seventeenth Doll delighted audiences in the 1950s because they felt that they could recognise the characters as Australians like themselves. The Torrents was never going to function in the same way. A play about the 1890s written in the 1950s, it is old-fashioned in many ways, heavy with earnest speeches. But this latest staging allows the play’s ideas, and wit, to shine. It also reminds us of the ways that expert actors and creatives can bring a play to life: it benefits from a bustling naturalistic set, and skilled performances (particularly from Gareth Davies as Ben Torrent) enhance the play’s comedy. If this production had been staged in 1955, then perhaps Gray, and The Torrents, might have made their mark: not quite up there with the Bunnings sausage sizzle but not entirely overlooked, either. •

Michelle Arrow is Associate Professor of Modern History at Macquarie University. Her books include Upstaged: Australian Women Dramatists in the Limelight at Last (Currency Press, 2002) and The Seventies: The Personal, the Political and the Making of Modern Australia (NewSouth, 2019).