In a bid to end the constitutional crisis, Samoa’s Supreme Court has ruled that parliament must meet by 5 July 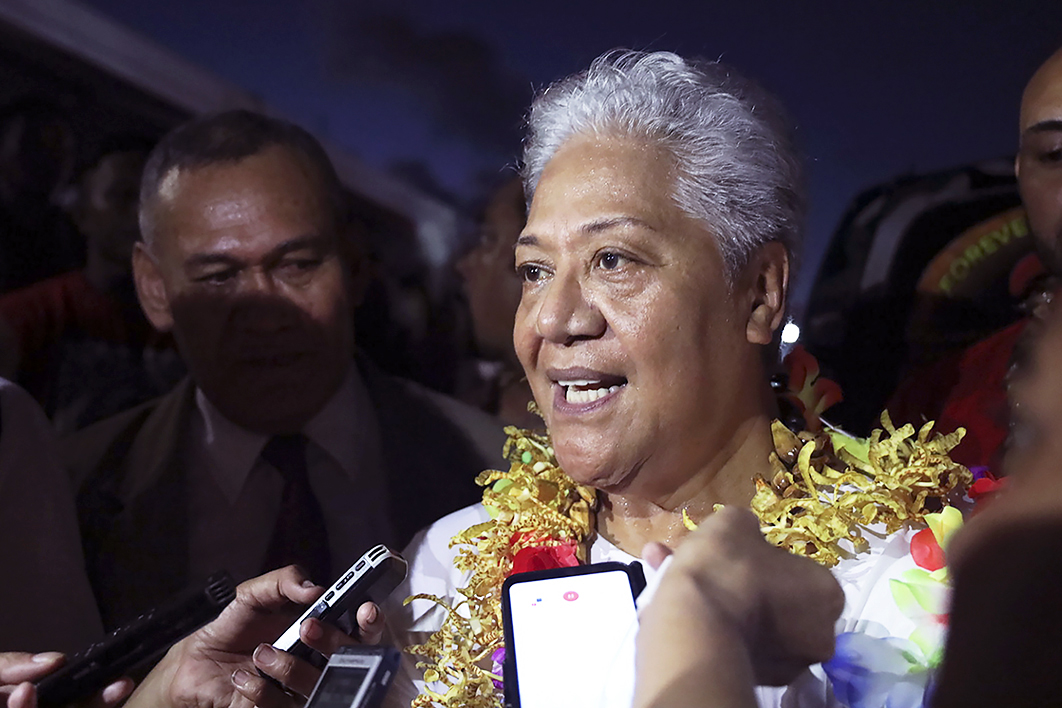 On 24 May Samoa’s chief justice strode across the few metres that separate his courthouse from the legislative assembly to attend the official opening of the seventeenth Samoan parliament. There, he found the doors locked tightly shut. To prevent the new government from taking office, former speaker Leaupepe Toleafoa Faafisi had violated a Supreme Court ruling by directing that neither judges nor parliamentarians be allowed to enter.

Later that day, the party that won April’s general election, Fa’atuatua i le Atua Samoa ua Tasi, or FAST, organised an impromptu swearing-in ceremony under a huge tent on the grounds outside parliament. Adorned in a white dress amid a sea of red-jacketed supporters, prime minister elect Fiame Naomi Mata’afa swore her oath of allegiance. Absent were the O le Ao o le Malo (head of state), the clerk of parliament and the chief justice, who normally preside at such occasions. Also missing was Tuilaepa Sailele Malielegaoi, prime minister since 1998, who accused FAST of “treason” and of trying to “steal” his authority.

Five weeks later, on Monday this week, the Supreme Court ruled that the swearing-in had been unlawful and failed to conform with the customary “solemnity” of such occasions. Nevertheless, the judges ordered that the fifty-one members of parliament meet to form a new government within seven days. That deadline expires on 5 July.

The drama started in April when Tuilaepa’s Human Rights Protection Party, or HRPP, lost to FAST by a narrow twenty-five seats to twenty-six, with the balance tipped by a single independent who chose to align with the opposition. Tuilaepa refused to go quietly. First, he sought to use the country’s 10 per cent gender quota to manufacture an extra HRPP seat and bring the tally to twenty-six all. Then he persuaded the O le Ao o le Malo to cancel the election and order a fresh poll.

When the Supreme Court knocked back both manoeuvres on 17 May, only a few days remained before the expiry of the forty-five-day post-election deadline for parliament to sit to select a new government. In accordance with the court’s judgement, the O le Ao o le Malo belatedly ordered the required meeting take place but then promptly rescinded the order for reasons, he said, “that I will make known in due course,” before scuttling away to his home village at the other end of the island. His reasoning remains unexplained.

The Supreme Court, unusually sitting on a Sunday in a devoutly Christian country, upheld the O le Ao o le Malo’s first order but cancelled the second. The outgoing government’s attorney-general walked out of the courtroom in disgust.

Tuilaepa, acting as caretaker prime minister, clearly hoped that delaying official proceedings beyond the forty-five-day limit would create a situation in which a fresh election was the only option. But this left him in open defiance of the court. He accused judges of having close kinship ties with the opposition leadership and insisted that the “court cannot issue demands because all three branches [of government] have equal powers.”

Although the Supreme Court ruled unlawful his effort to secure an extra female HRPP seat, the appeal judges did accept that the 10 per cent gender quota had not been met and that an extra seat might therefore be warranted — but only after twenty-eight election petitions (mostly for bribery and treating) were dealt with. Tuilaepa’s response was to insist that the formation of a new government should await not only the conclusion of petition hearings but also any consequent by-elections.

On this score, he is going backwards. Of the twenty-eight petitions, four have been heard so far; of these, three have entailed HRPP seat losses, strengthening FAST’s claim to be able to form a stable government. Although the judges left open the idea that the final seat tally should await their own deliberations, they have — quite rightly — brooked no further delay in selecting a government.

Tuilaepa’s calculation was that if he were able to force a fresh election, the HRPP might win. That isn’t far-fetched: the HRPP shot itself in the foot in April by fielding multiple candidates in single-member districts, despite the country having switched to a fully-fledged first-past-the-post system. This strategy had served the party reasonably well at previous polls, when unofficial HRPP “shadow” candidates were often co-opted into the ruling party if and when they proved successful. This time the party simply split its own vote, leaving it with a minority of seats despite its 55.4 per cent of the popular vote.

In fact, the HRPP had shot itself in the foot twice. It also banned floor-crossing by amending the Electoral Act so that a “seat of a member becomes vacant” if he or she “resigns from a political party to join another political party during the parliamentary term.” Even “holding” oneself out as a member of a different party to the one under which one contested an election can lead to the forfeiting of a seat. Without the new floor-crossing rule, the HRPP might well have been able to entice a few FAST MPs to switch sides following the April election.

This constitutional crisis may have ended, at least temporarily, a thirty-three-year period of political stability unparalleled among the independent Pacific Island states. But Samoan politics hasn’t always been so stable, and nor is this the first time the courts have ruled against a sitting prime minister.

On 17 September 1982, the Samoan Supreme Court ruled that then prime minister Va’ai Kolone had lost his seat due to “personation” (fraudulent votes cast in the name of deceased or absent voters). As a result, the HRPP government that had emerged from the 1982 elections lost its 24–23 majority. Normally, that outcome would have been conveyed first by the acting chief justice to the speaker, and then to the O le Ao o le Malo, in a process that might have taken at least a week. But on that very same evening the O le Ao o le Malo, Malietoa Tanumafili II, telephoned opposition leader and pre-1982 prime minister Tupoula Efi, who was sworn in as replacement prime minister the next day.

As political scientist Asofou So’o has pointed out, the crises of the 1980s could have caused major social unrest if not for the respect commanded by the O le Ao o le Malo and the courts, and the general adherence to the constitution, democratic principles and the rule of law.

This week’s Supreme Court ruling leaves Samoa at a crossroads. Although the judges rejected FAST’s argument that it had acted in accordance with the “doctrine of necessity” by seeking to form government within the forty-five-day limit, they did indicate a preparedness to revisit that verdict if parliament doesn’t meet within seven days.

The “doctrine of necessity” has sometimes been applied by unscrupulous or intimidated judges to rubber stamp the overthrow of governments. Where they retain some independence, however, judges normally apply the doctrine only in cases where a severe crisis or social unrest creates a legal vacuum that justifies extra-constitutional action with the ultimate objective of upholding the constitution. That Samoa’s judges should contemplate such a course of action indicates the depth of their displeasure that “the executive arm of government has deliberately and unlawfully prolonged the calling of Parliament for plainly political reasons.”

Tuilaepa has not been a bad prime minister for Samoa, but all political careers must eventually come to an end. It is time for him to pass over the reins of office. •

Jon Fraenkel is Professor of Comparative Politics at Victoria University of Wellington.

How we tumbled down the Covid-19 league table 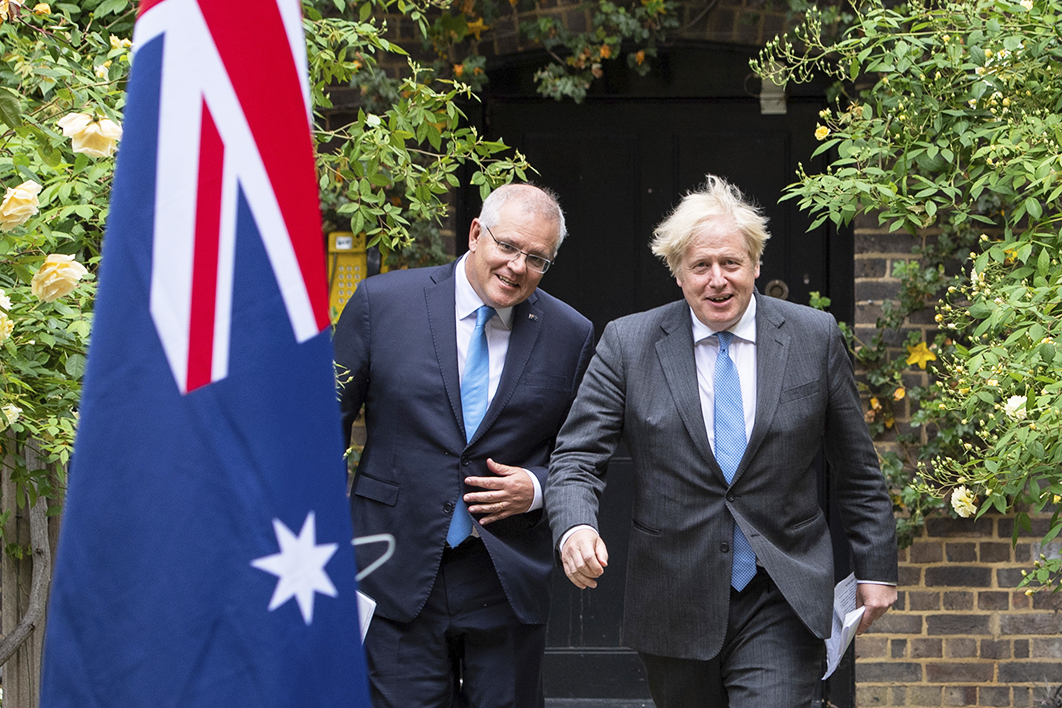