A pyrrhic victory for federalists?

Despite first impressions, the High Court's decision in the chaplaincy case was far from a clear victory for federalism. Graeme Orr looks at what it means for how the federal government spends its money 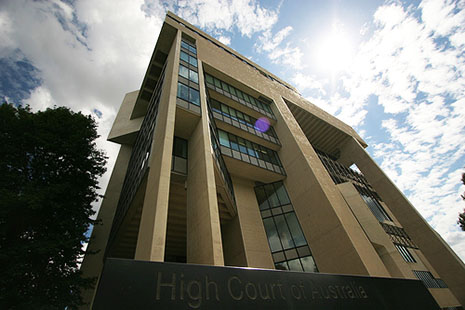 All seven justices of the High Court (above) rejected the argument that the chaplaincy scheme breached a church–state divide.
Photo: Jirrupin/ Flickr

VISITORS to the valleys and downs west of Brisbane often note the region’s religiosity, reflected in billboards decrying abortion or proclaiming the Gospel. Though he’s as fecund as any biblical patriarch, Toowoomba father of seven Ron Williams doesn’t drink from the same philosophical well. Late last week, he succeeded in having the national school chaplaincy program declared unconstitutional, at least in its present form.

Williams was offended that the secular status of his children’s public school was diluted by a program established by the Howard government and continued by Kevin Rudd and Julia Gillard. Politically, the scheme represents third-way thinking: churches delivering social welfare. Economically, it is canny. While hundreds of millions of dollars have been invested so far, chaplains are not well-paid. Desperate for whatever help they can get, few public schools have stood on secular principle in the face of the program’s lure.

Williams’s primary argument, however, was from that very principle. He wanted to buttress a separation of church and state.

In Queensland, the school chaplaincy program is run through the Scripture Union. The mission of this “inter-denominational” movement is to evangelise among young people, mixing “Christian service” with “Bible ministry.” But chaplaincy is more than (and different from) a vocation. School chaplains are not meant to proselytise, and require at least a modicum of training in youth counselling. Education minister Peter Garrett extended the scheme so that schools can go it alone and look for a secular counsellor.

Nine months after hearing the case, the High Court delivered its 217-page verdict last week. Although Williams won – ostensibly – by six justices to one, atheists, agnostics and anti-establishmentarians have little to cheer about. All seven justices rejected the argument that the scheme breached a church–state divide.

The Constitution only prevents the Commonwealth from establishing or prohibiting a religion, or erecting religious tests for Commonwealth office. It does not restrict funding of services delivered by religious bodies, and school chaplains do not hold a federal “office.” (Even if they did, the states could fund them.) It took the judges barely a page each to conclude that Australia is not the United States when it comes to church–state sensitivities.

So how did Williams “win,” and what of the other 210 pages of judicial rumination? The court decided that – with some fuzzy exceptions – the Commonwealth has no business directly funding any activity that falls outside its list of legislative powers. As set down in 1901 and amended only twice since then, those powers focus on things like defence and immigration, corporations, commerce and trade, and certain welfare benefits and family matters. There’s no mention of key areas such as “education,” “environment” or “hospitals.”

Yet the Constitution, envisaging that the Commonwealth would end up with more money than it needed for those limited purposes, does explicitly allow it to “give financial assistance to any state on such terms and conditions as the parliament thinks fit.” In short, the federal government may give state governments as much pocket money as it likes, with as many strings attached as it likes.

Fans of federalism seem delighted with the decision. As in the United States, Australian federalists tend to be traditional, small-government conservatives: they want to dilute public power by dispersing it. But the decision is more a boon for the arcane worlds of public sector finance, accountancy and legislative drafting than it is for genuine federalism. It does nothing to redress the “vertical fiscal imbalance” under which the Commonwealth raises around 80 per cent of all public revenue. Nor does it affect the historical trend for the High Court to read specific Commonwealth legislative powers very widely. In the WorkChoices case, for instance, the court held that the power to regulate corporations permitted a national takeover of most of employment law.

The contracts for chaplaincy services will be easily resuscitated if the Commonwealth chooses to funnel the money via state education departments. Indeed, within hours of the decision, government and opposition leaders were queuing to pledge their allegiance to the program. Expect soon to see a State Grants (School Chaplains) Bill on a Commonwealth parliamentary agenda near you.

Why then did another Williams – Professor George rather than Mr Ron – describe the judgement as the most significant the High Court will deliver all year? As he rightly says, the judgement threatens to require a major, long-term overhauling of the form and even nature of Commonwealth government activity in many areas. Attorney-general Nicola Roxon even speculated on whether a referendum might be needed to counteract any ill-effects of the decision.

George Williams cites the federal “Roads to Recovery” program as one example of a scheme now in doubt. That’s a pun masquerading as another continuing Howard government scheme, in this case to administer grants to councils to improve road surfaces. There are untold other schemes with similar structures: a Commonwealth agency administers a pool of funds, making conditional grants and contracts to various bodies other than state governments. The momentum for such schemes dates to the Whitlam government’s Australian Assistance Plan, which sought to bypass state governments by creating Regional Councils for Social Development to plan and fund social welfare and development.

The High Court has said that such programs cannot simply exist by executive fiat, however much taxation money the Commonwealth has to spend. This may come as a surprise to those who have grown used to the expansion of Commonwealth activity across the twentieth century, especially to politicians from Whitlam to Abbott who want problems with a national dimension to be governed by national policy.

The Commonwealth can still raise revenue on anything it likes, and for whatever purposes it likes, whether purely fiscal, or to provide micro-economic, social or environmental incentives. But the court has reinforced its view that the Commonwealth lacks a reciprocal freedom to budget and spend revenue on anything it likes. Ordinarily, it will have to point to specific legislative power – and perhaps pre-empt novel schemes with actual legislation (the court did not speak clearly on this) – to validate expenditure. The judges seem less motivated by a federalist desire to corral Commonwealth spending than by the view that involving parliament in more of the executive’s programs befits responsible government.

Pre-empting this, Nicola Roxon has had a bill ready and waiting to validate as many programs as possible. En masse validation is hardly the sort of parliamentary oversight the court intended. At the time of writing it is also unclear how such legislation will protect schemes (like chaplaincy) that fall outside Commonwealth legislative power, short of providing for the moneys to be channelled via the states.

AS FAR as knocking over windmills goes, Ron Williams rode the trail blazed by Bryan Pape. Pape, another tablelander (from over the border, in New England) challenged the $900 “cash splash,” the Rudd government’s first response to the initial effects of the GFC. Pape, a tax law academic and avowed states’ rightist, tried to stop the payments as beyond Commonwealth power. The High Court almost agreed with him, but rescued the stimulus by treating the economic crisis as something special.

In Pape’s case, the court did not want to be seen as wreaking economic vandalism through legal pedantry. It avoided this by labelling the GFC as a national urgency, if not emergency, necessitating the might of the national executive to achieve a direct response. The court has also recognised a related “nationhood” power, allowing the Commonwealth to establish the flag or hold a party for a national birthday like the 1988 bicentenary. (These two powers are distinct from the almost unfettered power to act internationally, by waging war, acting diplomatically, and entering and implementing treaties.)

Between the obvious and bespoke (national symbols) and the unexpected and all-encompassing (overwhelming events washing across the nation), no one has any idea what else this “national executive” power might extend to. Could it preserve the largesse spent on sporting prowess, simply because Australian athletes might one day glorify us all in green and gold?

More significantly, does it cover the $7 billion allocated annually to universities under the Higher Education Support Act? University research and accredited degrees may be seen as an inter-related national project, in a way that school chaplains are not. The question, however, invokes the chicken-and-egg problem. Prior to Menzies in the 1950s, universities were not a national affair, but a sleepy corner of each state’s bailiwick. The High Court has hinted at its position: not everything the national government is interested in, or can afford, is necessarily a matter of national interest.

All these questions will exercise bright and wonky minds, especially in Canberra, over the coming weeks and months. Vulnerable projects will be identified; risk assessments will be made. Some funding schemes will be shored up, a tad inefficiently perhaps, by simply channelling the money via state agencies. Grants to private schools may fall in this bag.

In other realms, the Commonwealth may seek to coordinate with the states, as partners in a cooperative scheme. And in still other instances, it will make a considered bet that no one has sufficient political or legal interest to upset a particular apple cart. Thoreau may have famously refused to pay a poll tax on pacifist grounds, but individual Australians cannot legally object to government expenditures just because some portion of “their” taxes is involved. In the chaplaincy case, Ron Williams had to rely on the fact that his children were implicated and that his primary argument was about church–state affairs, not governmental accountancy.

Yet the states do have “standing” to argue, before a court, that Commonwealth spending is unconstitutional. Last week’s ruling would have been a godsend to that states’-righter, the one-time Queensland premier Joh Bjelke-Petersen. Latter-day premiers may be tempted to threaten to bring down some pillars of the temple of Commonwealth expenditure, if only as a bargaining tool.

How the Commonwealth re-jigs its affairs to adjust to this latest High Court intervention into other branches of government, only time will tell. Federalists, as I have noted, may yet wonder how pyrrhic their victory will prove. Centralists will see an irony in the fact that the Commonwealth can engage in whatever nation-building it likes abroad, but will have to find accounting tricks and state conduits to fund similar things at home. In the meantime, Ron Williams’s children will have to live with a chaplain in the playground with God’s glint in her eye. •

Graeme Orr is a Professor of Law at the University of Queensland.

There was no golden age for newspapers, writes Geoffrey Barker. Which means we shouldn’t be too pessimistic about the future 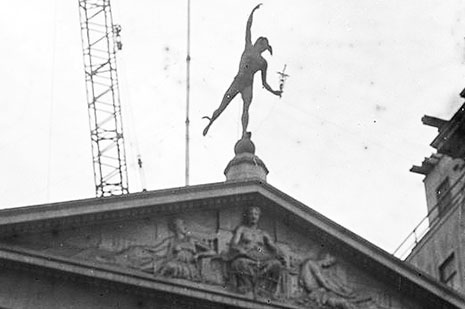