Malcolm Turnbull is playing the long game, writes Peter Brent, but he mightn’t be leader when it counts 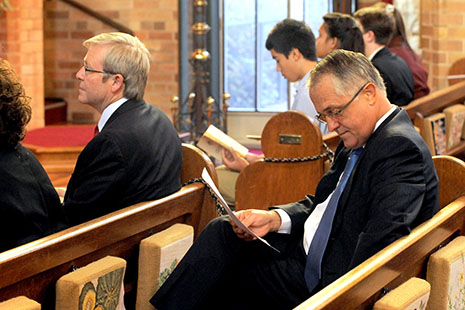 Kevin Rudd and Malcolm Turnbull during the ecumenical church service in Canberra on 3 February marking the start of the parliamentary year. Alan Porritt/AAP Image

WAS MALCOLM TURNBULL’s decision to oppose the federal government’s stimulus package a blunder? Most commentators seem to think so: he’s managed to get both the business community and low income earners offside. Most importantly, the opinion polls immediately after his announcement registered a hike in support for Kevin Rudd and the government, and a drop for Turnbull and the opposition. The fall in support was on all fronts – voting intentions, approval ratings, economic competence.

But to call the Coalition’s rejection a strategic mistake is short-sighted. Pardon the cliché, but this is a marathon, not a sprint. There is no election due next week or next month. What the polls say in six months’ time will be more important than what they say today, and what they say a year after that (assuming this government runs a full term) will be most important of all.

Rudd is still immensely popular and in the electorate’s eyes the government can do no wrong. For the time being there is little anyone can do about that except for the government, and it shows no signs of obliging. But if Rudd’s star does fade before the next election, the Coalition has positioned itself to take advantage. If Rudd is vulnerable in a year, the opposition will have armed itself with an extra weapon: the “failure” of the stimulus package.

The Coalition rejected the stimulus package for the same reason overseas centre-right opposition parties – the Conservatives in Britain and the Republicans in the United States – voted against stimulus packages proposed by their centre-left governments. It made sense politically.

Note that in countries where centre-right parties are in power – Canada, for example, and New Zealand, Germany and France – stimulus packages are going ahead. Governments of all stripes are doing it. It’s what the International Monetary Fund wants and it sits firmly in Contemporary Orthodox Economics 101.

Life is miserable for opposition parties, but one saving grace is a lack of accountability. They can play politics by espousing public positions they know would be untenable if they were in government. That is, they can favour politics over good policy because nothing they do will make a difference anyway. All oppositions do it.

Like his overseas counterparts, Turnbull also knew that his opposition would make little or no practical difference. The package was always, despite the few nervous hours last week, going to pass. It was a low-risk strategy.

If the economic news keeps getting worse (and most economists believe it will) unemployment will be higher in six months time and many more people will be hurting. The government will correctly insist that the situation would be worse if not for their injection of liquidity, but the opposition will have the easier argument: the package didn’t work and now we’re tens of billions of dollars poorer. With unemployment climbing by the month, this argument will have more and more power.

If the Coalition had supported the package, Rudd would still have received the short-term kudos and Turnbull would remain a bit player. But if the economy continued to sink, the opposition would share ownership of the bad news. They would have forfeited their carping rights, and they too would have some explaining to do.

So Turnbull did the sensible thing politically. But his approach is not without risk. He has in the past successfully positioned himself to say “I told you so” but so far the electorate hasn’t cared and this may continue to be the case. The Rudd government is still young, which means it is a world away from, say, Gordon Brown’s in Britain and Bob Hawke and Paul Keating’s during the early 1990s recession. These governments had been boasting for years about their economic prowess, they had taken ownership of the good times and they could not wholly disown the bad.

Previous Labor governments led by James Scullin (1929–31) and Gough Whitlam (1972–75) were buried by international economic downturns at least partly because of public displays of disunity or incompetence. But Australians today understand that the recession is not the new government’s fault, and if it remains as dull and disciplined as it has been so far, this may remain the case. Alternatively the dire economic situation may prove insurmountable. We don’t know how this recession will pan out politically.

But Turnbull’s biggest problem is that even if his plans come to fruition, he may not reap the rewards. It is the way of modern politics that opposition leaders don’t last long, and if he is still in place when the election is due late next year he will have been the longest serving opposition leader since Kim Beazley stepped down in 2001. In fact, the short-term hit he has taken on the stimulus may hasten his demise.

Knowingly or not, Turnbull has put his party’s interests ahead of his own. •