Having grown up sheltered from the winds of modernism, painter Nora Heysen took a fresh turn in 1930s London 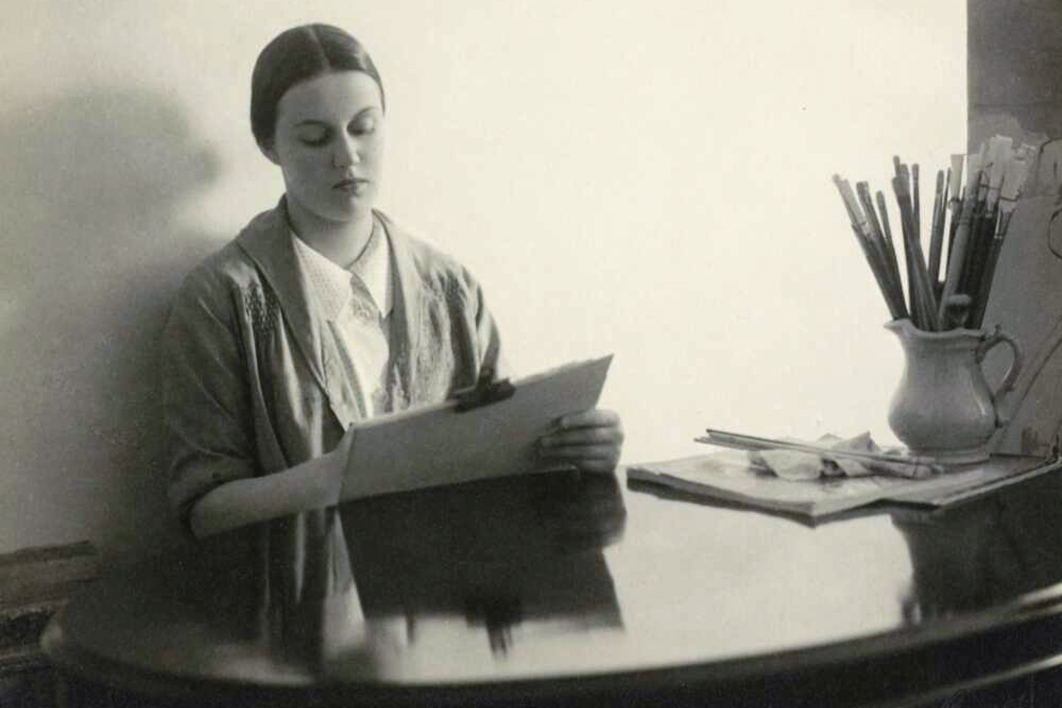 Picasso’s Demoiselles d’Avignon is dated 1907. Matisse’s adventures in blue had begun, the Fauves were mustering and, across the channel in London, Virginia Woolf gave 1910 “or thereabouts” as the year the shift in consciousness of writers (and artists) became palpable. It was not, she said, like going into a garden and seeing that “a rose had flowered” or that a “hen had laid an egg.” “The change was not sudden and definite like that. But a change there was, nevertheless.”

The winds of modernism were also being felt in distant Australia, and some were already packing for the move to Europe. In Adelaide, Margaret Preston had recently returned from there, having seen Matisse and Kandinsky, to establish a teaching studio where Gladys Reynell and Stella Bowen both enrolled.

But the Adelaide Hills, just a few miles away, felt not so much as a breeze. Hans Heysen, Preston’s contemporary, was buying a large, rather gloomy house near the village of Hahndorf; at the edge of the bush, it looked out to the dry landscape and the magisterial gums he’d paint many times over the remaining fifty years of his life. He had absorbed something about light and recession from Cézanne, though not his colour; beyond that he was, and would remain, staunchly anti-modernist. He and his wife Sallie, the daughter of a well-established Adelaide family, took pride in his growing reputation, each of them conservative in their own way; they bought the house at Hahndorf on the back of the high demand for his antipodean landscapes.

Nora, the fourth of eight Heysen children, was a year old when they moved into The Cedars and Hans built the studio in which she — the child who inherited his talent — would begin her painting life. He was fiercely proud of her, supervised her education, advised her early moves, and let her use his most expensive paints. As the next generation of Heysen talent, she was taken seriously by her father’s colleagues and admired by his friends. Were it not for those distant winds, Nora could be said to have grown up in the best of possible circumstances for a future artist.

Anne-Louise Willoughby’s Nora Heysen: A Portrait has been released to coincide with the National Gallery of Victoria’s exhibition Hans and Nora Heysen: Two Generations of Australian Art. It is timing that puts Nora firmly in the company of the father who cast a shadow so long that even at eighty she could still wonder if she’d come out from it. And it may, paradoxically, be exactly what she — or we — need to see both of them afresh, and to see that shadow for all that it was, and was not. The question Willoughby puts at the centre of her Portrait — a question long debated — is whether Nora’s success was because of this relationship, or in spite of it.

In 1932, aged twenty-one, Nora painted a polished self-portrait with the accoutrements of her father’s studio around her and the corner of a Vermeer print behind her. Severely dressed, with her hair pulled back in a plait, she looks at us over her shoulder — “as if she lived in Delft in the seventeenth century.” In 1933, another self-portrait has her dressed for the twentieth century, with fewer studio accoutrements but that same smooth paint and academic precision. Although this time she turns towards us with an expression that looks to the future, there is still no sign of the modernism that she would encounter over the next few years. In transition: Nora Heysen’s study for a self-portrait from 1933 (above, detail from the cover of Nora Heysen: A Portrait) and 1938 self portrait (below, Queensland Art Gallery). Both these self-portraits are in the NGV exhibition — and so is the one she painted in 1938 after she returned from several years in London. In those few years, she had stepped into her own generation. Dressed in blue, and brought forward against a plain background, with loose, broken brushstrokes and heightened colour, she faces us, a woman of the twentieth century. For some this self-portrait marks her coming of age as an artist in her own right; for others the question still hovers, even there. Had she freed herself from him? Could she?

The question of modernism was at the heart of the complex entanglement — “fraught” is Willoughby’s word — between these artists of two generations. Hans Heysen became, increasingly, a conviction anti-modernist. When he was in London with Nora in 1934 — he and Sallie and two of the sisters were there briefly to “settle her in” — even Picasso and Braque left him “cold.” Modernism, especially its “colour box,” was a “conundrum” to him, a dangerous “somersault” away from the “tonal values” that were the “substance” of art. Nora, on the other hand, was excited by that colour box, by the emphasis on expression and feeling. Among the painters she met in London was Orovida Pissarro (the daughter of Lucien, granddaughter of Camille), who told her frankly that her colour was years behind the times. Get rid of all those blacks and browns and ochres! Nora went straight out and bought a new range of colours, plenty of blues, and square brushes to break up the paint. “It’s amazing the depth and richness of the colour that can be got,” she wrote to her father.

Hans and Nora exchanged frequent letters. I read the originals in the National Library of Australia in the late 1990s — since then a selection has been published — and I’m glad that I did. The words can be reproduced, but the hand, the ink, the temperament of the pen, cannot. Hans wrote with a neat and regular hand; Nora’s dashed across the page. There are few corrections by either of them; when their easy exchanges became fraught, his hand becomes more controlled while hers gathers speed.

When Nora first wrote of exhibitions that excited her, conversations with fellow students, her discovery of colour, and the joy of being in Paris with her friend Evie Stokes (of whom Sallie disapproved), Hans tried to be understanding — she was young, after all. And then he became alarmed. Confident that the “somersault” would correct itself, he didn’t want his talented daughter stranded in the tumble. From his perspective he was protecting her. But right then, free of the family for the first time, she didn’t want, or need, his protection — particularly when it meant enduring the assessments of her work Hans arranged with senior artists. “I’m rather inclined to place life and meaning above tone,” she wrote.

The point at which she could not push back came when she heard news of the failure of not one but two of his exhibitions; poor reviews and low sales were an unaccustomed humiliation. She rushed to his support, reassuring him of exactly those “abiding values” she’d been arguing against, caught between the generational shift she was a part of and the desire to protect him from his own generational vulnerability.

“I adored him,” she said when I visited her in Sydney in the late 1990s; we were standing in her hallway looking at her drawing of Hans, a table set up beneath it with candles and flowers, as if a shrine. “I sometimes wonder if it would have been better for me (my art) not to have gone to London,” she told NGA curator Mary Eagle in 1996.

“A woman interrupted” is Willoughby’s summation, and she is at her best when writing of this foundational “interruption.” It provides a tension that gives shape to the narrative of the first three decades of Nora’s life.

On her return from London, the interruptions continued. When she won the Archibald Prize in 1938, the initial boost of success was tempered by the voices of suspicion that it was her name — the Heysen name — that won her the award, as well as the not-so-quiet murmurs about a woman being there at all, let alone as winner. And then there was the shocking death that same year of her eldest sister Josephine, who’d been banished to rural Victoria after an ill-timed pregnancy and a rushed marriage to a man much disapproved of at The Cedars. It seems she contracted pleurisy, was given a caesarean, and died. The child, also named Josephine, was taken back to The Cedars, adopted, and raised as another Heysen. It is a story of the conservatism of the time, and of the family, and particularly of Sallie, who by protecting the Heysen reputation gets most of the blame for this awful event.

While every life has its personal setbacks and tragedies — and they are interruption enough — for Nora’s generation there was also the overwhelming interruption of the second world war. As biographer, Willoughby is confronted with a very different context, a profound shift of narrative. In 1943, a year after the Japanese had landed in New Guinea, Nora took a commission as a war artist. Hans — who had advised against this move for fear of what she might see — takes a backward step, and in his place the authority she must contend with is Colonel Treloar.

This time it is a matter of command. After she was posted to the Allied operations base at Finschhafen, on the north coast of New Guinea, to record the “patriotic duty” of the army nurses and medical personnel, she was almost ordered back to Melbourne for painting the nurses off-duty — reading, looking out to the mountains, even dancing. “Not Florence Nightingale enough,” Nora said. She stood up to Treloar on that one and, surprisingly, he relented. She stayed on to paint more than 250 works, the vast majority of the medical work or war, and to take her sketchbook forward with the troops towards the front, where she did indeed see things hard to forget.

It was at Finschhafen that she met Dr Robert Black, part of a medical team researching the prevention and treatment of malaria. The narrative shifts again as love and war come together in a high-risk affair: Nora in the “unforgiving” khaki of the uniform she loathed, and a handsome young doctor, still in his twenties, with a wife and a child in England. It was a prelude to three decades of interruption: separation, more disapproval at Hahndorf, a double life in England, a marriage, more trips to the tropics, back to Papua New Guinea for Black’s research, sometimes with Nora, sometimes with another, until the final interruption of separation and divorce.

Biography is a difficult genre. The demands of narrative and character can be stalled by the weight of other people’s stories, and by the disjunction, often, between contemporaneous views and current judgements and realignments. Willoughby’s background as a journalist has served her well for her interviews with curators and family; those with Josephine No. 2, and with Meredith Stokes, the daughter of Nora’s friend Evelyn, add to our understanding of the Heysen context. The second half of the biography is less successful. With a life this interrupted, with the narratives of father, war and husband vying for dominance, the portrait blurs and the through line of Nora’s art becomes fragile, as if it too is dissipated, perhaps inevitably, by the narrative interruptions. •

Hans and Nora Heysen: Two Generations of Australian Art is showing at the NGV until 29 July 2019.