A world of needs

Outbreaks, vaccines, and the limits of centralised control 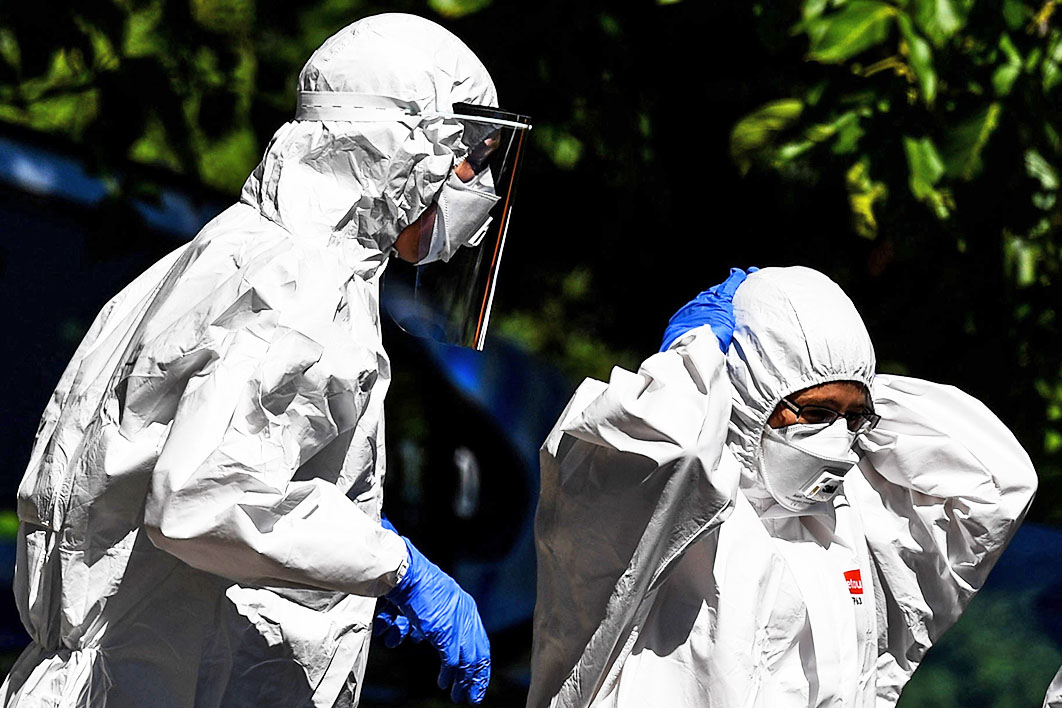 Through the cycle: health workers collect samples at a makeshift Covid-19 testing station in Mamming, Germany, yesterday after a local coronavirus outbreak on a cucumber farm. Philipp Guelland/EPA

With every new pandemic, it seems, public health authorities must relearn the limits of command and control, and rediscover that a sustainable response needs community participation. It was the case with AIDS — Nancy Reagan’s “just say no” to sex or drugs is lying in history’s dustbin with other exhortations to good behaviour. Yet the mistake is repeated. In the West Africa Ebola outbreak less than a decade ago, foreign experts simply could not understand why local people wouldn’t stop holding funerals even after they had been told they were a high risk transmission site. It was only when community engagement became central to the response that the epidemic was curbed.

I am still to detect a serious commitment to community participation in Australia’s Covid-19 response. Instead we get premiers and prime ministers fronting press conferences with today’s mix of empathetic motivational exhortation and stern warnings that police are out there fining miscreants. Little surprise, then, when ludicrous adult-toddler tantrums in shopping centres go viral.

This is not the way to foster sustained behavioural change. For that, a web of information, mutual expectations and, above all, self-policing has to be woven from the ground up, sensitive to all the nuances and complexities of the geographies, cultures and histories that make up local communities and contribute to particular risks in particular situations.

What is clear by now is how good the virus is at sustaining itself by transmitting between largely asymptomatic cases. Almost all of the countries that have been congratulating themselves for getting new cases down to zero have been facing renewed outbreaks; this week it was China and Vietnam. European countries, where the virus began circulating in the last months of 2019, well before the public health alerts, have moved through the cycle of overwhelmed health systems, stringent lockdowns, “bending the curve” and reopening, and are now considering which lockdown measures to reintroduce.

Back in February 2020, Harvard epidemiologist Marc Lipsitch was predicting that within a year Covid-19 would infect some 40 to 70 per cent of people around the world. That prediction was something of a double-edged sword — it was accurate as to the virulence of SARS-CoV-2, but it also led to a shrug of inevitability, especially as it was accompanied by the view that most cases would be asymptomatic or mild. Wishful thinkers drew the conclusion that the epidemic was nothing to worry about; more acute observers realised that even if only a tiny fraction of the infected became seriously ill the number of excess deaths would be huge.

Results of surveys estimating what proportion of the population has been infected with SARS-CoV-2 are still all over the place. India’s National Centre for Disease Control recently reported a 23 per cent prevalence in Delhi in early July. Seroprevalence surveys in Geneva showed that less than 5 per cent of the population had antibodies in early April, rising to nearly 11 per cent a month later. Spain has conducted two rounds of a national survey, the latest showing 5.2 per cent prevalence across the country in early June. A modelled estimate of seroprevalence in France was 4.4 per cent on 11 May. New York City reported prevalence rising to between 19 and 22 per cent, and a survey in an informal settlement of Buenos Aires suggested infection rates as high as 53 per cent. Iran’s president recently startled even his own health ministry by announcing that twenty-five million Iranians may have been infected out of a total population of some eighty-four million.

Accurately estimating these numbers is not as easy as it may seem. Serosurveys detect antibodies produced by the infection. The first challenge is to get a representative sample: some of the early HIV prevalence estimates were wildly inflated until it was realised that a sample drawn from those attending STI clinics might not be representative of the whole population. Then there is the accuracy of the tests: do they reliably detect antibodies? And the nature of the antibodies themselves: they are not detectable in the very earliest stages of infection, and in the case of Covid-19 seemingly tend to fade away a few months after infection.

The durability of an antibody response is one of the question marks hanging over vaccine development. The last month saw a number of the most promising vaccine candidates moving into phase 3 efficacy trials. Some of the media coverage presented this as the “final stage” of testing, as if an effective vaccine is nearly here. It would be more accurate to say that the vaccines are just beginning their real test — whether they work to prevent infection — having passed the qualifying hurdles of showing whether they are capable of producing an immune response and won’t kill the recipient. But if the antibody response to SARS-CoV-2 is only transient, then those vaccines that work by producing neutralising antibodies may not produce lasting immunity.

And even if a durably effective vaccine is found — and it would seem that Donald Trump is pinning his re-election hopes on being able to announce one somewhere in the lead-up to polling day — the big issue will be getting access to it.

Globally, three organisations — the vaccine alliance GAVI, the Coalition for Epidemic Preparedness Innovations, and the World Health Organization — have sought to bring order and equity into the scramble for vaccine access through the COVAX facility. More than 150 countries are engaged in the process that aims “to accelerate the development and manufacture of Covid-19 vaccines, and to guarantee fair and equitable access for every country in the world.” Australia has been a supporter of GAVI but was not noted as one of the countries to have submitted an expression of interest in the COVAX facility — unlike New Zealand and Britain, among others. COVAX aims to produce two billion vaccine doses by the end of 2021, delivered equally to all participating countries on a per capita basis, with initial priority for healthcare workers expanding to reach 20 per cent of the population.

COVAX represents planned, fair and orderly access to a future vaccine. The alternative is for the richest countries to make down payments on preferential access. The United States has made a series of announcements of its payments to secure vaccine access, paying Pfizer nearly US$2 billion for one hundred million doses should its vaccine be successful, with an option on 500 million more doses, US$1.6 billion to Novavax for one hundred million doses of its vaccine, and US$1.2 billion to AstraZeneca for 300 million doses of the vaccine it is developing with the University of Oxford. This is on top of the US’s attempt to corner the global supplies of the Gilead-owned drug remdesivir, one of the few Covid-19 treatments to have shown any degree of success.

Meanwhile, Russian state-sponsored hackers have been accused of attempting to steal valuable Covid-19 vaccine information. I am reminded of a UN country team meeting on AIDS a few years ago when a staff member reported with concern that large quantities of the condoms put in dispensers in the toilets had been going missing. The meeting started discussing what sort of locks could be placed on the dispensers, when I intervened: we employ people to distribute free condoms and support all sorts of social marketing exercises trying to get people to buy them; if someone has found a nice little sideline in selling pilfered condoms we ought to be applauding it, not shutting it down. What is the worst the Russians might do? They might develop a vaccine!

Some in the pharmaceutical industrial complex might be salivating at the prospect of making a killing on Covid-19 vaccines. But the de jure and de facto reality is that public health trumps intellectual property rights in a health emergency. The first developers of vaccines will be well rewarded anyway. As soon as an effective product is found, the imperative will be to scale up its production and distribution. •

Michael Bartos, an Honorary Associate Professor in the Department of Sociology at ANU, writes regularly on the Covid-19 pandemic for Inside Story. He spent seventeen years as a senior United Nations official, including serving as UNAIDS Representative in Zimbabwe from 2013 to 2016.