A year can be a very long time in politics

This time in 2017, Australians were voting on marriage equality. What happened next? 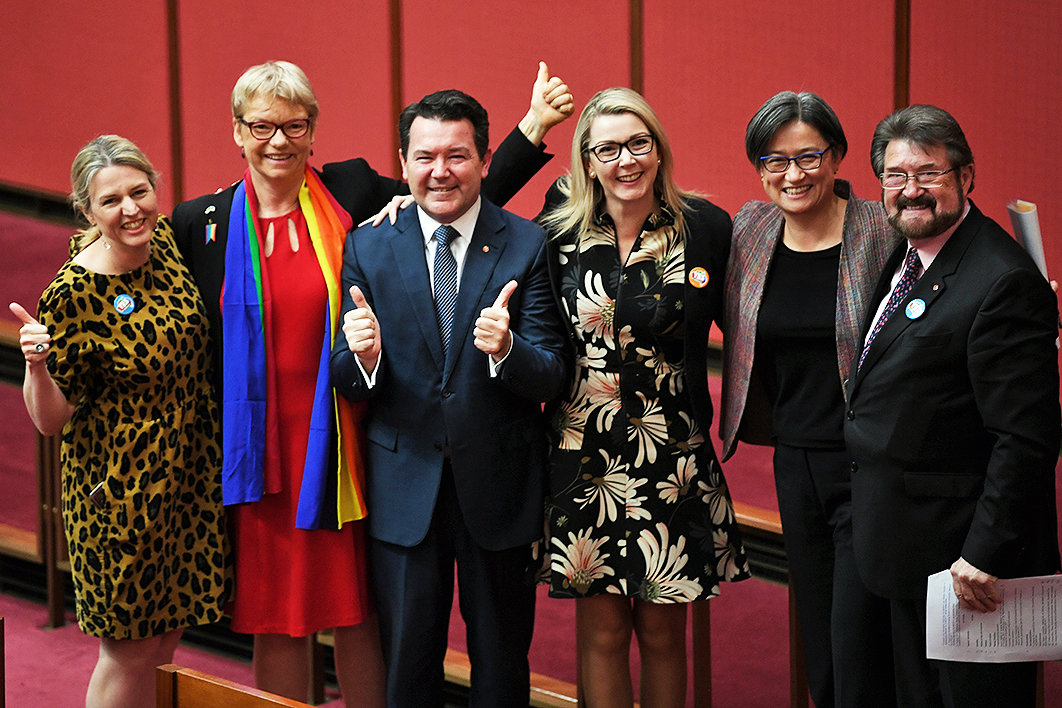 Amid the personalised factionalism that has paralysed federal policy-making for the last decade, last year’s postal survey on same-sex marriage takes on the warm glow of a brief escape into a happier and more productive political world. It was all the better for being unexpected.

Bear in mind the postal survey was originally Peter Dutton’s bright idea. The assumption was that the conservative opponents of marriage equality would be better at mobilising their forces than the Yes campaigners, many of whom, it was thought, had never posted a letter in their lives. (This kind of assumption was illustrated in an American strip cartoon at about this time in which a teenager is taken by his mother to post a birthday card to his grandmother, and, having dubiously put the card through the slot, is not convinced that it has been “sent” because there is no whoosh sound.)

Dutton and his allies were aware that opinion polls had for some time shown support for marriage equality at about 60 per cent, but they thought that much of this support, outside the gay community and its political allies, was relatively shallow and unlikely to be replicated in a voluntary vote.

Initially, gay organisations saw the postal survey proposal as a delaying tactic, and of course in one sense it was. If parliamentarians had had a free vote, a bill would have passed both houses, but political leaders had striven to avoid the issue. Even in Julia Gillard’s time, a free vote might have settled the issue, but Gillard, for her own political reasons, professed to be opposed to marriage equality.

Tony Abbott, too, refused to take up the issue or allow Coalition members a free vote. He and his successor Malcolm Turnbull supported a nonbinding and possibly voluntary plebiscite but could not persuade the Senate to accept it. The standing of politicians in the community, always questionable in Australia, was not enhanced by their representatives’ evasion of their responsibilities.

A postal survey required no legislation. Once it was formally announced, the supporters of marriage equality threw themselves into the campaign. And then a remarkable thing happened. Although voting was not compulsory, people seemed eager to respond. In the end, an impressive 79.5 per cent sent back a response, with 61.6 per cent voting Yes. Every state and territory voted Yes, only seventeen electorates recording a No vote, twelve of them in the outer suburbs of Sydney. The Irish constitutional referendum on marriage equality (internationally the only other poll on marriage equality) had a turnout of only 61 per cent, but the Yes vote there was almost identical to Australia’s, at 62 per cent.

Conservatives were stunned by the outcome. All they could offer were feeble protests that religious freedom would have to be protected, though it was hard to see how marriage equality in itself would impinge on that freedom.

Opposition melted away in parliament and all attempts to amend the legislation were defeated. An extraordinary celebratory atmosphere crossed party lines in the House of Representatives. Liberal Tim Wilson proposed to his partner in the public gallery and was accepted. When the bill was eventually passed, the crowd in the gallery burst out with the Seekers’ “We are Australian.” Only four MPs were prepared to vote against the bill, though a number abstained. The people had spoken so decisively that the pressure to pass the legislation without amendment was overwhelming.

Although that was less than a year ago, the vote and its aftermath has taken on a kind of dreamlike quality. Did it really happen? We are back with the brutal reality of personal vendettas, yet another change of prime minister, and policy paralysis. How was it possible for marriage equality to break the political mould?

From the beginning, with the collapse of its 2016 census website still fresh in mind, the Australian Bureau of Statistics was anxious that its conduct of the survey should be above reproach. The Bureau actively encouraged eligible voters who were not on the electoral role to add their names, and 98,000 mostly young people did so. The survey form posed the simple question, “Should the law be changed to allow same-sex couples to marry?,” requiring a Yes or No response.

The Bureau began sending out the survey forms on 12 September, and it was estimated that they would have all reached their destination by 25 September. Voters had until 7 November to respond, so every allowance was made for those travelling or away from home. At the same time, they were encouraged to respond immediately if possible. Each week from 3 October the Bureau reported the estimated rate of response, and it became a kind of guessing game. What would the final figure be? On 3 October it was already 57.7 per cent and over the next five weeks it climbed to the final, magisterial 79.5 per cent.

The postal survey was such an unusual device that it became a talking point. A plebiscite would have been a much more formal affair and would have invited comparison with a constitutional referendum. In doing so, it might well have tapped the caution about change that has resulted in so many referendums being defeated. The postal survey could also be seen as an opportunity to rap politicians over the knuckles for their failure to address the issue of marriage equality.

So, in a curious way, the survey drew on the anti-political feeling that has always had a significant if fluctuating presence in Australia. And the fact that the vote was not binding meant that it was technically only advisory, so again the voters were not weighed down by a heavy sense of responsibility and could see their contribution as simply an expression of opinion.

The Yes case was framed around the simple assertion of legal equality. Advocates of a No vote felt compelled to claim they had no prejudice against gays and lesbians, but that marriage was sacred etc. etc., and in doing so ignored the historical separation of church and state. Father Frank Brennan had only to point to this separation to justify a Catholic voting Yes, asserting that the Church did not need to intrude on what was a secular decision. And, of course, there was at least a minority of non-Catholics who hoped that their churches would come to condone marriage equality. The Uniting Church has since done so.

It is tempting to speculate whether a postal survey could be used to resolve other issues that have sunk in the quagmire of federal politics. Conservatives, however, are no longer likely to find it an attractive option. And it is difficult to see how, for example, climate change could be reduced to a simple Yes–No question, while a sequence of questions would have a complexity that might discourage responses. The republic issue could perhaps be reduced to a simple Yes or No response as a preliminary expression of opinion, but some might be tempted to abstain if they did not know what the options were going to be. We may have been lucky to have had this one experiment with a postal survey.

The survey opened a door on another Australia, one that was impatiently out of step with the claustrophobic, in-bred world inhabited by the political class. That door has been slammed shut by the Abbotts, the Duttons, the Joyces, the Morrisons and even the Turnbulls. The conservatives have taken their revenge. Turnbull, a Catholic supporter of marriage equality, briefly had the satisfaction of presiding over the passage of the legislation through the parliament, but then returned to his familiar role of conceding, bit by bit, the last remaining fragments of progressive policy to the dustbin offered by its enemies. In the end they put him out of his misery. And marriage equality may still need to be defended from those seeking to restrict its application. Indeed, the response to the leaking of the confidential report of the Ruddock panel suggests that battle lines are already being drawn. •

John Rickard is Emeritus Professor of History at Monash University. His most recent publication is the revised third edition of his Australia: A Cultural History.