With the shadow boxing continuing, Labor seems likely to inherit the headache 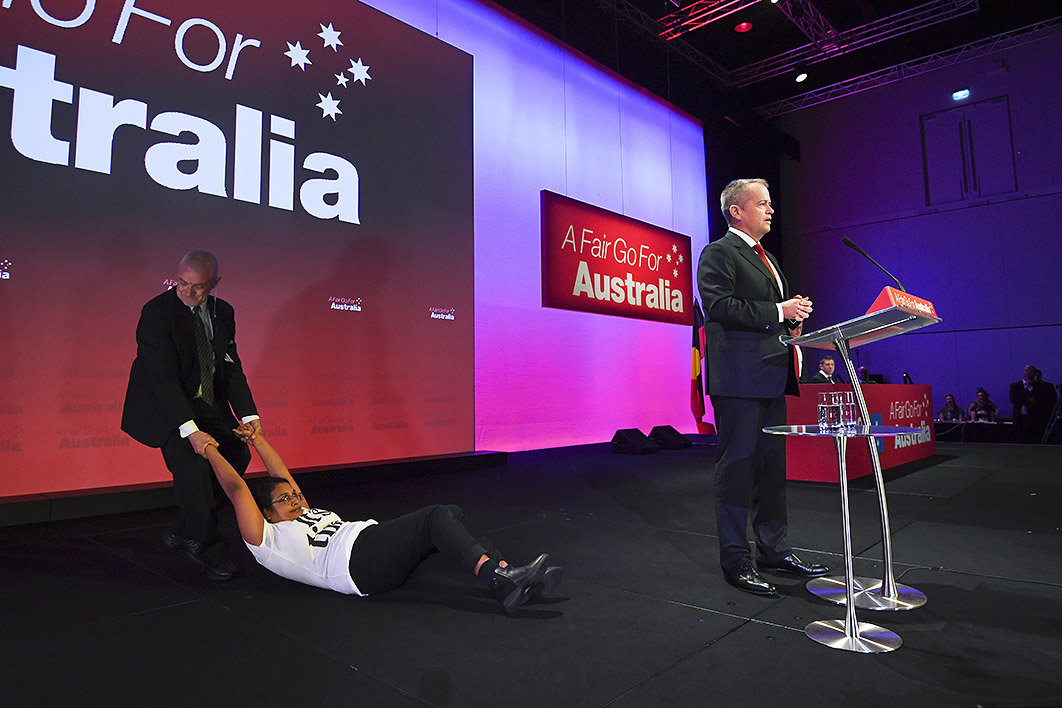 Crunch time: an anti-Adani protester being removed from stage as opposition leader Bill Shorten speaks during day one of the Labor Party national conference in Adelaide in December. AAP Image/Lukas Coch

Throughout the long struggle over Adani’s Carmichael mine, I’ve argued that the project is not only environmentally disastrous but also financially unviable. Adani’s objective has been to keep the project alive for two reasons: to avoid bringing the losses to date onto the Adani Group’s books; and to maximise the chance that an Australian government will pay the company to go away, or at least will stop the project in a way that leaves open the possibility of a claim under the insidious investor–state dispute settlement system, or ISDS, that applies between Australia and India even after the lapsing of our trade agreement.

For their part, Labor governments would clearly like Adani to pull up stumps and leave, but they don’t want to be blamed for the loss of (largely imaginary) jobs or to be sued under the ISDS. Given that no financial institution in the world seems willing to finance this appalling project, that result has seemed like a safe bet.

Adani’s announcement in November that the project would be financed with $2 billion of its own resources was a clever move to undercut this hope. But Adani doesn’t want to spend such a massive sum, of course, any more than it spent the $400 million supposedly released for preconstruction works in 2017. So, having announced a start on construction “before Christmas,” the company did nothing.

Its jobs portal, set up with great fanfare in 2017, has so far listed only four or five Adani jobs (though other employers use it quite a bit). This is presumably what the company was referring to when it claimed recently that “our advertisements in Brisbane and regional Queensland highlight that we are ready to deliver the jobs and business opportunities that we have promised for Queensland.”

The self-funding announcement stirred the pot for a while, but something more was needed. So Adani announced that it was moving heavy earth-breaking equipment to the site in readiness for an immediate start. It released a couple of pictures (see below) and stated: “We have since moved the first earthmoving equipment to the site to be ready to commence work once the outstanding management plans are finalised. Early works to prepare the rail project for construction can now begin under current project approvals but work on the mine will not commence until the management plans are finalised as we noted when announcing financing for the project.” You don’t need to be an expert to see that only one, or maybe two, of the vehicles in these pictures could be described as “heavy earthmoving equipment.” They look more suited to clearing scrub around the mining camp than digging a massive coalmine, or even carrying out “early works to prepare the rail project for construction,” which the company claims is happening now. And while the camp (which was apparently constructed in 2016) can accommodate 300 workers (rather fewer than the 10,000 we were once promised), the collection of vehicles parked out the front suggests that actual occupancy is more like twenty.

Just like Prince Potemkin’s famous (if possibly apocryphal) villages, moved from place to place along the Dnieper to give Catherine the Great an impression of bustling activity, there’s every chance that this arrangement is just for show.

The Queensland Labor government has responded in kind. Whereas Adani suggested that its radically revised proposal was still covered by previous approvals, the government is sending it back to the drawing board on a range of issues. That provides Adani with more excuses to do nothing while continuing to blame government obstruction.

If federal Labor wins government in May (as seems highly likely), it will need to face up to the issue later this year. First of all, it will need to develop a coherent policy on phasing out coal exports — ideally involving a ban on new coalmines, though this is almost certainly too much for Labor to contemplate. That proposal also faces the counterargument, put forward by both mining companies and unions, that reduced Australian exports would be replaced by lower-quality coal from other countries.

The argument has some force, but there’s a way of taking it into account. Australia’s benchmark export is Newcastle coal, with an energy content of 6000 kilocalories per kilogram and a correspondingly low ash content. The premium for this higher-quality coal has risen greatly, though it has declined somewhat in recent years. Galilee Basin coal’s heat content, by contrast, is estimated at less than 5000 kcal/kg, and its ash content is 26 per cent, worse than coal from many competing countries. A policy that stops short of a blanket ban but requires new mines to supply coal of, say, 5500 kcal/kg or more would put an end to any idea of developing Galilee, while allowing for some smaller, higher-quality projects to proceed.

But that might not protect Australia from action by Adani under the ISDS. For this and other reasons, a Labor government should urgently negotiate the removal of all ISDS clauses from existing trade agreements, and exclude such clauses from any future agreements. This process should be backed up, if necessary, with the threat of repudiation.

All of that is in the future. For the moment, Adani continues to issue media releases and display banners claiming that it is ready to start mining at any moment, while carefully avoiding spending any more of its own money. Governments continue to temporise, hoping that the economic irrationality of the project will cause it to fall over without the need for any action on their part.

Sooner or later, the issue must be resolved. In the meantime, my guess is that we will see a fair bit more shadow-boxing. •