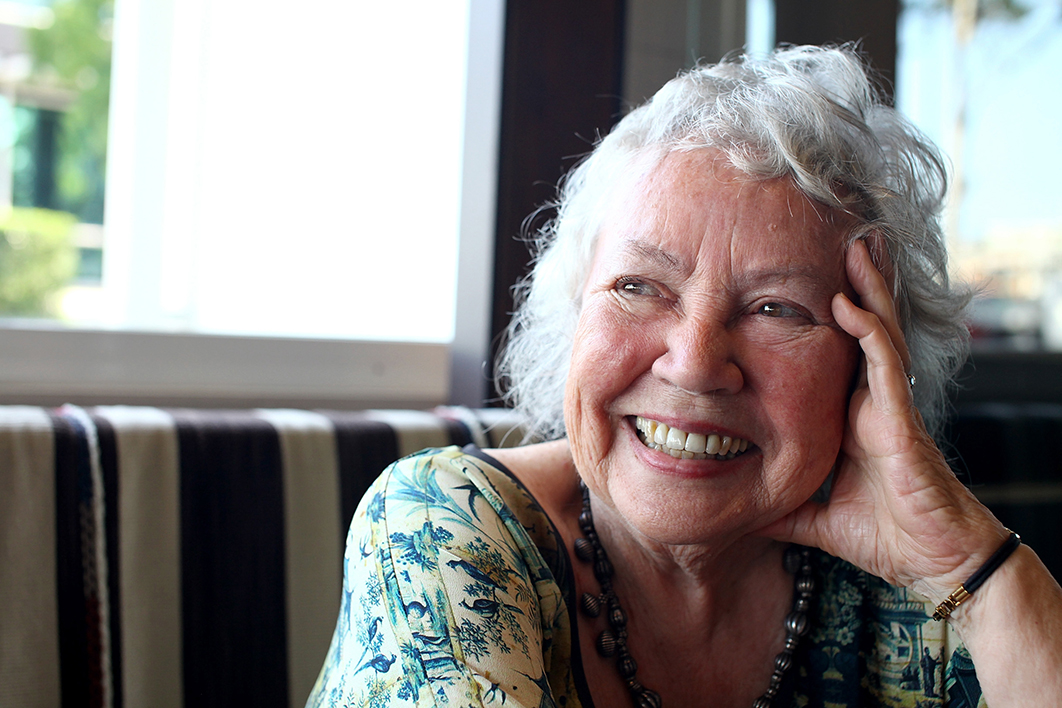 Bringing the Fight: A Firebrand Feminist’s Life of Defiance and Determination
By Merle Thornton, with Melanie Ostell | HarperCollins | $29.99 | 288 pages

Merle Thornton, a true icon of Australian feminism, has published her memoir at the age of ninety and what a delight it is. The pleasure starts with the cover — it’s bright yellow with the title, Bringing the Fight, in bold pink. Right in the middle is a captivating photograph of a youthful, beaming Merle, striding purposefully, dressed in a fetching ensemble with a sturdy bag in her hand and sensibly stylish buckled shoes on her feet.

The photo is dated “c. 1950,” when she was twenty-year-old Merle Wilson and a student at the University of Sydney, a period she describes as “the happiest time of my life.” It was there that she met her future husband, a bookish returned soldier named Neil Thornton; together, they would raise a family and have many adventures. Around 1950, the adventures included discovering sex, being in thrall to the philosopher John Anderson and mixing with the Libertarians who eventually morphed into the Sydney Push, the bohemian scene that incubated Germaine Greer, Clive James, Robert Hughes and other notables.

The Sydney Push would become notorious for its sexism, but by then Merle had moved on to the public service, where she quickly developed strategies to combat boredom and land the better gigs. “Before Germaine, there was Merle,” declares the cover blurb, and indeed there was. We’re very fortunate that Germaine Greer and Merle Thornton are both still with us, but while we know a lot about Greer — too much, perhaps — how much do even the most dedicated students of Australian feminism know about Thornton, other than the 1965 Regatta Hotel protest she is best known for, and perhaps the fact that she’s the mother of actor Sigrid Thornton? Until now, not nearly enough.

What Merle Thornton tells us about her life and times is, on any measure, the right amount — not too much, not too little, coy in parts but candid elsewhere, and vivid throughout. It’s a fast, breezy read, written with the assistance of Melanie Ostell, and grew out of a stage show, Frank and Fearless, commissioned by the Queensland Music Festival, in which Thornton shared stories with her daughter.

It’s a memoir that also wants to inspire and instruct, with life lessons and maxims peppered throughout. The narrative is chronological, peaking in the 1970s, with occasional pauses to showcase “indelible moments” and “bookish influences.” These features sometimes tip over into whimsy, but the overall effect is endearing. As a narrator, Thornton is consistently good company. Crucially, she knows she is a historically significant figure but doesn’t over-inflate her importance. And even without the better-known parts, the nine-decade span of her life makes for fascinating social history.

Thornton was born during the Great Depression and attended Fort Street Girl’s High in Sydney in the 1940s, at a time when the majority of her classmates left school at fifteen. In one memorable observation, she contrasts the femininities of university-bound young women like herself (“dowdy matrons in our black cotton stockings”) and the contemporaries who left school to enter the world of work and romance “dressed in fashionable pencil skirts” with “proper hairdos,” who were like “colourful birds.” “It’s an interesting paradox,” she notes, “that we would learn many different things that these women would never know about, and yet we remained children for so much longer.” Merle Thornton (right) and Rosalie Bogner chained to the footrail at the Regatta Hotel, Toowong, in March 1965. Bruce Postle/Newspix

By contemporary standards, Thornton’s life path might be the more common one — she graduated from university, got married, had children and continued to work, study and travel — but some of the most fascinating sections of the book evoke how different Australia was in the 1950s and 1960s, especially for women.

As a university student, she was an anomaly; as a public servant she had to hide her marriage (and for as long as she was able, her first pregnancy) in order to keep her job. In the first decade of her marriage she used a cap and spermicide for contraception, and she recalls that “preparing for sex could be a slow, at times embarrassing and potentially shaming learning experience subject to trial and error.” The arrival of the contraceptive pill in the early 1960s is duly recognised for the seismic event that it was, even if the initial batch gave her migraines.

The 1960s became her decade. At the University of Queensland, where her husband took up a lecturing post in 1960, Thornton threw herself into campus life. In her first direct action, she stormed down the corridor from the dull women’s staffroom to the male common room and sat down, “heart thumping.” Never a fan of single-sex organisations or segregated socialising, she wanted the right to be where the conversation was, regardless of her sex.

In this spirit, Thornton and her friend Rosalie Bogner staged her next direct action, this time on a much more ambitious scale. They chained themselves to the front bar of the Regatta Hotel on 31 March 1965 to protest against liquor laws that excluded women from drinking there. With the press tipped off, their novel action made headlines around the world and inspired a wave of similar protests. For all of its spectacular qualities, however, it’s the quotidian details of the protest that stand out, including the large kilt pin she used to cinch the waist of her skirt, and the performance of deep conversation with Bogner as the action played out. “I have no recollection of what we said to each other,” Thornton recalls, “and wouldn’t be surprised if it was ‘rhubarb, rhubarb, rhubarb.’”

After the Regatta protest, which comes around three-quarters of the way through, the memoir’s energy dissipates somewhat. Riding on the protest’s momentum, Thornton became a “go-to person on the issue of equal rights” and established the Equal Opportunities for Women Association, which successfully lobbied for the removal of the “marriage bar” from the Public Service Act in 1966.

But while Thornton has remained a dedicated feminist, including as a foundational figure in women’s studies at the University of Queensland, women’s liberation was never quite to her taste. Hers is a politics of like-minded people working together for a common cause, whether it’s libertarianism and free thought, Aboriginal rights or equal opportunities for men and women. If at times these principles strike the reader as old-fashioned, this book also provides plenty of reminders — including the groovy cover — that Merle Thornton was a genuine trailblazer. •