A new book unpacks the complex relationship between politics and football in Spain, writes Scott Ewing 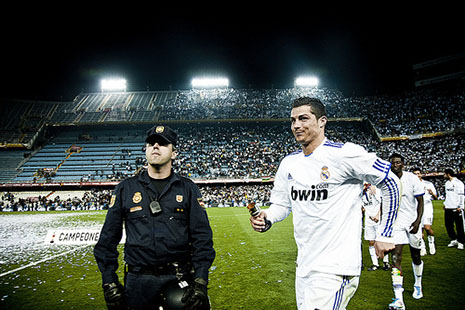 FIRST, an admission. I love Sid Lowe. Sid, a workaholic football correspondent based in Spain, is the main La Liga correspondent for the Guardian as well as a contributor to ESPN, Sports Illustrated, World Soccer and FourFourTwo. He is a regular on the Guardian’s excellent biweekly football podcast, hosted by the estimable A.C. Jimbo, where his dog Estela plays a vital role. And because he has so little to do, he has also started an English-language podcast, the imaginatively titled Spanish Football Podcast, with fellow North London ex-pat Phil Kitromilides.

Lowe’s new book, Fear and Loathing in La Liga, is a detailed historical account of football’s greatest rivalry: Barcelona versus Real Madrid. The two clubs have been bitter enemies for many years and in the last decade have come to dominate not just Spanish but also world football. Ten of the planet’s best-eleven-in-2012 FIFA team came from either of the two clubs, and they have provided the last eight winners of the Ballon d’Or, awarded to the best footballer on the planet.

In this thoroughly researched and elegantly written account, Lowe has a clear mission in mind. He wants to complicate the widely held view that the clubs’ rivalry is a neat battle between Good and Evil, Left and Right or Republican and Royalist. He achieves that objective in fine style, delivering a knock-out punch at the beginning of the book. While Orwell may inadvertently have enshrined Barcelona – and Catalonia more broadly – as the epicentre of the Republican movement during the Spanish Civil War (for the English-speaking world at least), Lowe shows that Madrid, too, was a major stronghold of the Republicans and, for the most part, more central to the struggle. As he writes, “Madrid held Franco, Mussolini and Hitler’s troops at bay: by comparison Barcelona barely saw them.”

Lowe is just as eager to dispute the view that Real Madrid became dominant following the Civil War because they were the regime’s team. He argues convincingly that the reverse was true: the regime became interested in Los Merengues (as the club is known) as a powerful national symbol because it was so successful. Real Madrid won the first five European Cups between 1956 and 1960; and following their fifth success they were given the original cup to keep and a new one was commissioned. Franco and his dictatorship were drawn to the club as a means of improving their image abroad and selling Spain as a strong and successful nation. “Madrid have carried the name of Spain round the world with the greatest decorum,” said Alfredo Sánchez Bella, the Spanish ambassador to Italy between 1962 and 1969. “Their players have acted like veritable ambassadors, bringing prestige to our Fatherland.”

Likewise did Barcelona FC, the self-styled “more than a club,” play a part in Catalan resistance to Franco’s Castilian-based government. Although Lowe argues that “every club necessarily accommodated the regime, even if that accommodation existed on different levels and was undertaken with differing degrees of enthusiasm,” he recognises that by the late 1960s Barcelona became “a focus of resistance and discomfort for the regime, in a way that Madrid never did, albeit usually at a social rather than institutional level.”

My favourite example of Barcelona’s resistance was Dutch legend Johan Cruyff’s insistence that his baby boy, born in Barcelona in early 1973, be named Jordi, the Catalonian name for George and the name of the patron saint of Catalonia. Non-Castilian names were not allowed in Franco’s Spain, but Cruyff insisted: he liked the sound of the name and didn’t like being told what to do. The authorities relented, a victory both for global football and for Dutch obstinacy.

While there is a lot of “big P” politics in this book, there is also a lot of football and footballers. The names are big: “the gloriously grumpy” Alfredo Di Stéfano; “the Galloping Major” (and one time coach of South Melbourne) Ferenc Puskás; “the man who built the Nou Camp,” László Kubala; “the almost impossibly brilliant” Johan Cruyff; along with the two Ronaldos and Leo Messi, a player whose deeds have, at the age of twenty-six, exhausted the global football press corps’ reservoir of superlatives. And then there are the games that have come to be known as El Clásico. Wikipedia lists 225 competitive clashes between the two clubs, with Madrid winning ninety and Barcelona eighty-seven. When the two meet, all of Spain, and increasingly most of the world, watches. Over 60 per cent of Spaniards support one of the two clubs, and Lowe claims almost every Spanish football fan “has an inbuilt, permanent preference and really cares who wins the clásico.” The two have never met in a Champion’s League final but they have contested every other potential trophy. In 2010 they played an astonishing four clásicos in eighteen days.

As a regular reader of, and listener to, Lowe’s increasingly world-weary analysis of Spanish football, I wasn’t as engrossed by the chapters focused on the recent history of the rivalry. Even here, though, I found new details and nuances about this period of almost total domination by the two super clubs of La Liga, an era in which, as Lowe characterises it, “a draw is the new loss.” Last season Barcelona won the league with 100 points (the maximum possible is 114) and the season before that Madrid won with 100. In that year third-placed Valencia was closer to being relegated than they were to being the Champions. The duopoly has shared the last nine titles and twenty-five of the last twenty-nine, and it appears to be strengthening, with undoubted implications for the sustainability of La Liga. This is a problem in leagues across the world but it is exacerbated in Spain by the practice of clubs negotiating their television deals individually. Each of the two clubs earns nearly €100 million per year more than Valencia, the third-highest earner. No doubt I’ll be hearing Sid’s views on this and other issues facing Spanish football in the seasons to come. •

Scott Ewing is a Senior Research Fellow at the Swinburne Institute for Social Research.

With the next general election just a year away, New Zealand’s political landscape is subject to unpredictable tremors, writes Peter Mares from Wellington

Cardboard casino: the Greens placed cardboard models outside the New Zealand parliament to represent the poker machines and gaming tables SkyCity stands to get under its deal with the Key government.
Peter Mares 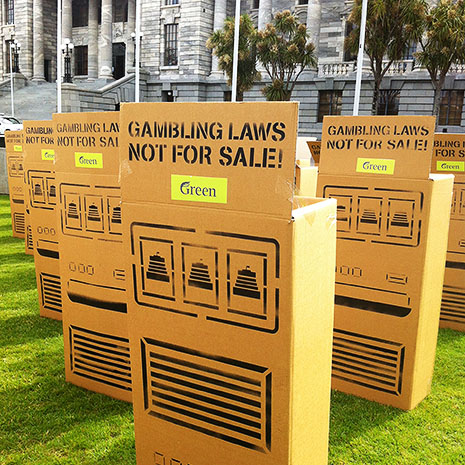 Cardboard casino: the Greens placed cardboard models outside the New Zealand parliament to represent the poker machines and gaming tables SkyCity stands to get under its deal with the Key government.
Peter Mares