How does a firm labelled “the greatest legitimiser of mass layoffs… in modern history” continue to sail tranquilly above the fray? 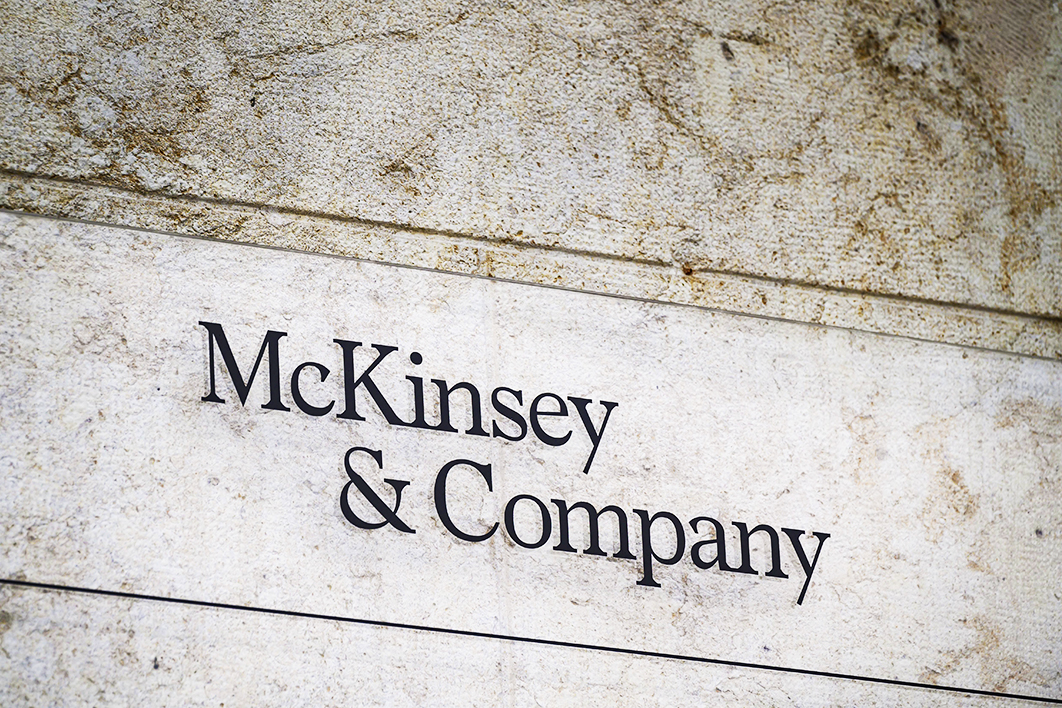 “We don’t do policy, we do execution”: McKinsey & Company’s office in Geneva. Fabrice Coffrini/AFP via Getty Images

In his 1971 play Don’s Party David Williamson introduced Australian theatre audiences to a new gallery of modern bourgeois types: a lawyer and a teacher, a dentist and a design engineer, an industrial accountant and an arts student. But perhaps the most exotic of all was Mal — “tall, good-looking, urbane, dressed casually but thoughtfully,” though also a blowhard and a know-all who boasted an acquaintance with Gough Whitlam and a flair for casual infidelity. What occupation would suit such a character? Mal, it’s revealed, is a “management consultant.” His wife translates this as “professional bullshit artist.”

It’s a rare enough representation of the genus to be notable, in terms of both its identification of this emergent class of knowledge worker and its creation of a popular image. Mal talks, expansively and emptily, but with the confidence of expertise and comfort with change. Williamson exacts on a him a modicum of revenge, having the character kneed in the balls, physically by a female antagonist and metaphorically by the election result. But if you consider the arc of the times, Mal is the character whom the looming years will best suit, in tune with the managerial revolution, the permissive society and, eventually, the electoral cycle.

Nowadays you can imagine Mal on the north coast, the poorer possibly for a couple of divorces but still retired in comfort, looking back serenely on the pioneering days of an industry now worth around $45 billion in Australia and employing about 160,000 people. The global industry is valued at nearly a trillion American dollars.

In the intervening years, as it happens, nobody has really come along to update the original public conception of those now known simply as “consultants” — “management” was presumably discarded as too explicit or too dowdy. Their tasks have remained nebulous: after all, no business must employ a consultant in the way they regularly depend on a lawyer or necessarily appoint an accountant or auditor. Even the jokes remain pretty much the same. (“They borrow your watch to tell you the time.” “How many consultants does it take to change a lightbulb? Depends on your budget.”)

Consultants are probably sensed more than seen, communing mainly with the C-suite rather than the rank and file. If you learn of the presence of consultants in the vicinity of your workplace, you will probably react as employees did at BP in the late 1980s and early 1990s, when they coined the timeless abbreviation of fatigue by management restructure, BOHICA (“Bend over, here it comes again”).

Walt Bogdanich and Michael Forsythe of the New York Times want to update the image of consulting giants as vague and jargonistic but more or less benign. The target of their new book, When McKinsey Comes to Town, is the best, brightest and toniest of all consulting businesses, McKinsey & Company, known to itself as “the Firm,” with its reputation for polished presentation, extreme discretion and handsome fees. Said of the Firm is what once was said of IBM — nobody was ever sacked for buying its services. When you lend your watch to McKinsey, you’re making clear that you really want to know the time, with the precision of an atomic clock.

Bogdanich and Forsythe’s book is a chronicle of McKinsey’s failures — at least in a reputational sense, for every consulting gig is in some way a success for the consultant unless for some reason they don’t get paid. It is not a history of the firm: Duff McDonald’s The Firm (2013) remains unsurpassed. Rather, each chapter is a case study: in overreach, in amorality, in complicity and, at bottom, in an indifference to human suffering all over the world, from the United States and Britain to China and South Africa.

The last of those criticisms also makes this a survey of hypocrisy, for McKinsey preens itself as a “values-driven organisation” and a promotor of the enlightened capitalism pledged to “doing well by doing good.” Bogdanich and Forsythe make a consistent, even relentless case that McKinsey is every bit as much a bullshit artist as Mal, if to a far more toxic degree and in a far more self-absolving fashion. As one partner they quote says when criticised for facilitating cruel and punitive American immigration practices on the US’s southern border: “We don’t do policy, we do execution.”

Bogdanich and Forsythe explore only cursorily the antecedents of that flair for influence and capacity for delusion. McKinsey exudes a sense of its specialness because it is special, a unique hybrid. Its founder, James McKinsey (1889–1937), was a university accounting professor and army logistics expert who evangelised that the charismatic business builder of yore would perforce give way to the “the scientific man, accustomed to research work and careful planning”; its greatest eminence, Marvin Bower (1903–2003), accented strategy and structure, and brought from a prior career in the law a strong ethic of client service, discretion and confidentiality. To this day, McKinsey keeps a low profile — rather as the shark keeps a low profile in Jaws.

McKinsey pioneered many of the customs now de rigueur in consulting, such as skimming off the cream at business schools, with a partiality to the so-called Baker Scholars at Bower’s alma mater, Harvard Business School. Later, Bower was instrumental in protecting the school from the incursions of Harvard’s president Derek Bok, who wished to tilt curriculum away from the famous “case study” method. During this fascinating late-seventies kulturkampf, described in J. Paul Mark’s The Empire Builders (1987), Bok argued for a more holistic approach to an increasingly complex domain:

The thing is to build into the faculty people who have a training both in moral philosophy and a knowledge of business. If the person’s base is only in philosophy you have been putting people to sleep and if his base is only in business, he will be saying things that are ethically naive. The only way to get at this is to hire some PhDs in moral philosophy and give them training in the business school. This way the students from these people’s courses will raise ethical issues with professors in other courses and those professors will have fellow faculty members to whom they can turn for advice.

Bower commissioned a report that successfully recommended maintaining the status quo. Its author was another prominent McKinsey personality, Tom Peters, later to ride to global renown as co-author of In Search of Excellence (1982), management theory’s inaugural global bestseller. We’ll never know the impact of the ethical lead Harvard failed to offer other business schools forty years ago, but I suspect its defeat helped reinforce the notion of business ethics as a contradiction in terms.

Bogdanich and Forsythe’s failure to get seriously to grips with McKinsey’s heritage and culture becomes something of a shortcoming of When McKinsey Comes to Town. McDonald has already made a compelling case in The Firm that McKinsey has been “the greatest legitimiser of mass layoffs… in modern history”; Bogdanich and Forsythe extend this, but without deepening our understanding. They have accumulated a good deal of inside information — including, as we are repeatedly told, the firm’s fiercely guarded client list. But they rather lack both broader context and inside testimony from senior figures.

Part of the problem is that there has never been a significant McKinsey whistleblower. The Firm is both averse to external recruitment and discouraging to those who wish to leave; on the contrary, its alumni network is a freemasonry of financial and commercial life. When it comes to pitching their services, the partners believe, it’s all the better to be dealing with those who have previously sold the same product.

What Bogdanich and Forsythe do provide is a cascade of the client depravity the Firm has enabled. McKinsey helped Purdue Pharma “turbocharge” sales of Oxycontin, the highly addictive opioid. McKinsey argued strenuously for the securitisation of loans that was a precondition of the global financial crisis. McKinsey’s insurance practice grew expert at enabling insurers to reduce and avoid payouts for claimants. McKinsey’s sustainability practice continues to “follow the money” towards oil and gas majors.

Bogdanich and Forsythe report some killer stats. Since 1965, McKinsey has worked for forty-three of the world’s top one hundred polluters, still collectively responsible for more than a third of the world’s greenhouse gas emissions. In the last six years of Enron’s existence, McKinsey Quarterly, the periodical of ideas that also acts as a corporate brochure, praised the fraudulent energy financier 127 times. More than that, McKinsey is deft at “playing offence and defence” — getting on all sides of a market, advising multiple competitors and regulators, private capital and public interests, and relying on its reputation to sanitise what in other eyes would represent a palpable and unconscionable conflict.

When McKinsey Comes to Town largely summarises exposés Bogdanich and Forsythe have already reported in the New York Times, and still reads like it, wanting for the intimate detail that characterises James O’Shea and Charles Madigan’s great consulting survey Dangerous Company (1997), with its lively reportage of disasters at companies like Figgie International and Sears.

Not all the blows land either. Blaming McKinsey for the runaway inflation in CEO remuneration because partner Arch Patton broke the taboo on airing executive salaries in Harvard Business Review in 1950, for instance, is too much of a stretch; the economist Michael Jensen, brilliantly profiled in Nicholas Lemann’s Transaction Man (2019), is a far more significant individual figure. And while it is gruesome to contemplate McKinsey compiling a report on government critics called “Austerity Measures in Saudi Arabia” for the regime in Riyadh shortly before the murder of Jamal Khashoggi, without more on the relevant consultants and their consciences it is hard to enter into the psyche of the Firm, or even to establish definitive cause and effect.

Bogdanich and Forsythe’s limp two-page epilogue, finally, leaves us with more questions than answers. Why have corporates and lawmakers developed such learned helplessness that they depend on the services of consultants? Why is McKinsey’s imprimatur so prestigious? How do people end up relating to the world so abstractly that they do not apprehend the antisocial outcomes of their deliberations? Maybe it is all an instance of what management has called the Abilene paradox, where a group of people collectively decide on a course of action counter to the preferences of many or all of its individuals. Or maybe it’s just what Don acknowledges when Mal celebrates having “shat on” his contemporaries: the consultant’s “talent for obsequiousness and bullshit.” •

Gideon Haigh has been a journalist since 1984, and now works mainly for the Australian. His most recent book is The Night Was a Bright Moonlight and I Could See a Man Quite Plain: An Edwardian Cricket Murder (Scribner, 2022).