An idea whose time never came

The federal government’s emissions trading scheme is in trouble. Richard Denniss looks at the alternative 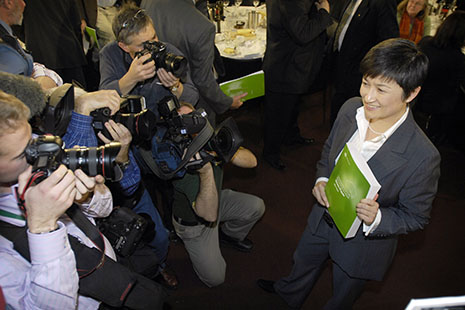 The flaws in the CPRS are becoming obvious, not just to the public but to the government itself. As the start date for the scheme approaches, the public and the parliamentarians are starting to look a little more closely at Minister Wong’s scheme and, as we saw with the debacle around the House of Representatives inquiry, they clearly don’t like what they are seeing.

Minister Wong is now arguing that, under her scheme, individuals who lower their energy use will enable the government to reduce the number of permits the following year, effectively raising the cap and allowing individuals to “do their bit.” This is a great idea. But the problem for the minister is that nobody knows what she is talking about. The question for her is simple: On which page of the white paper is this spelled out?

If the federal government is to be taken seriously where the CPRS is concerned, it needs to make some significant changes both to the targets, which are pathetically small, and to the structure. The scheme needs to be modified so that when individuals, communities and any level of government make significant efforts to reduce emissions, the number of permits issued in subsequent years reduces accordingly. For example, when Kevin Rudd announced that $3.9 billion was to be spent on insulation in order to decrease emissions by four million tones per year, he should have simultaneously announced that the number of permits issued would fall by four million per year.

The ACT government has announced that it aims to cut emissions by 30 per cent by 2020. That is to be commended, but unless the CPRS is modified to take advantage of such a plan, the only winners will be polluters in other states benefiting from the availability of more (and cheaper) permits.

While some of the measurement difficulties will need to be considered carefully, modifying the CPRS in this way is hardly rocket science. In addition to providing an incentive for individuals to act, it would overcome the biggest problem inherent in emissions trading schemes, namely the inflexible targets. Under such an approach, emissions would genuinely be capped but there would be downward flexibility.

Assuming Minister Wong continues to ignore external advice, what should be done with the CPRS? Regrettably, it seems there can be little doubt that the current proposal is so flawed in its design and so lacking in ambition that if the government refuses to consider amending it then the Senate will need to vote it down.

Second, a carbon tax has the advantage of working much more effectively with complementary measures, including investment in energy efficiency, public transport and renewable energy. One of the major flaws with the CPRS, as discussed above, is that investment in such “Green New Deals” will not reduce Australia’s emissions, they will merely reduce the price of permits. Under a carbon tax, on the other hand, if the carbon price does not achieve sufficient reductions in emissions, any investment in other measures will add to the effect of the tax rather than substitute for them.

Third, a carbon tax provides price certainty. While this is of some benefit to polluters, enabling them to plan accordingly, the major benefit is to renewable energy providers, enabling them to make investment decisions with sound knowledge of the likely cost advantage they will have over their polluting competitors. Renewable energy assets require a large, up-front investment and they are built to last decades. Investors are understandably worried that if they build large-scale wind, solar or other renewable energy sources the carbon price may fall (perhaps due to a world recession) and their competitive advantage will be lost.

What then should be done with the revenue from a carbon tax, assuming of course that it isn’t all given back to the polluters as Minister Wong proposes to do in the case of the CPRS? While there will continue to be a need to compensate low-income earners, who will experience higher energy prices, a carbon tax will provide a large pool of revenue into the future.

Given that investment in energy efficiency, public transport and other green projects works well alongside a carbon tax, it would be desirable to invest a substantial portion of the revenue in these schemes. In order to spend that money wisely, a statutory body should be established with one simple priority: spend money in the areas that deliver the biggest reduction in emissions per dollar spent. Individuals and organisations could help to develop proposals for such schemes, with as much work going into evaluating the projects when they are completed as goes into selecting them in the first place. Mistakes would still be made, but if we learned from them the costs would be small.

A carbon tax is not perfect. It can’t guarantee, for example, that a particular level of emissions can be reached. But it should not be forgotten that the CPRS can’t do this either. The CPRS does nothing to restrict emissions from the agriculture sector (which accounts for around 16 per cent of Australia’s total emissions). Worse still is a poorly understood feature of the CPRS, which commits the government to print up as many extra permits as the polluters want in order to make sure the price never rises above $40 per tonne.

In a comparison between a carbon tax and a textbook emissions trading scheme, it is the latter which appears most advantageous in addressing the problems of carbon emissions. But the CPRS is a poor proxy for the textbook model. The targets are not based on science, 90 per cent of the permits needed by the biggest polluters are being given away and the price is capped rather than set by the market. These shortcomings, together with its destructive impact on the motivation for individual action and the way the targets lock Australia into failure, make it easy to argue for its rejection if the government does not make serious efforts to fix it.

Penny Wong really has only two choices: start modifying her scheme or start designing a brand new one. •

Richard Denniss is Executive Director of The Australia Institute and author of Fixing the Floor in the ETS.

Books & Arts When the market is the policy, housing fails Peter Mares 25 May 2020 Books | Three housing researchers plot the way out of Australia’s affordability crisis
Close