Perhaps Ferran Adrià – the chef who redefined the restaurant dinner as a series of culinary tweets, usually thirty or more of them in a sitting – really is the man who changed the way we eat, writes Richard Johnstone 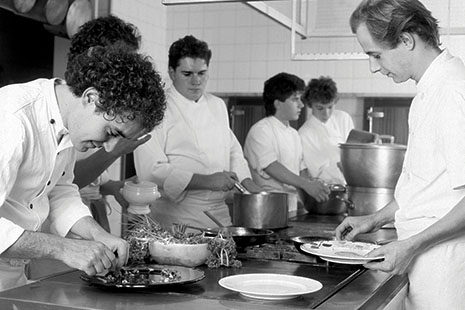 Ferran Adrià (left) and the kitchen team at work at El Bulli in 1985.

Reinventing Food – Ferran Adrià: the Man Who Changed the Way We Eat
By Colman Andrews | Phaidon | $39.95

IN HIS ENTERTAINING take on the life and career of the Catalan cook and culinary superstar Ferran Adrià – “the man who changed the way we eat” – Colman Andrews refers with some puzzlement to the length of time it took for Adrià to be properly noticed. From the mid 1980s, when the young man was beginning to establish himself at El Bulli, the restaurant with which his name is now forever associated, to the late 1990s when he received his third Michelin star, Adrià remained virtually unknown, his Michelin accolade “almost unnoticed, even in Spain itself.” Some years afterwards, Andrews is offered a possible explanation for this early failure of his compatriots to recognise the genius in their midst. Adrià “had no pedigree,” he is told by a Barcelona journalist of his acquaintance. “He belonged to no family of chefs.”

It is tempting to see more in this quoted remark than just a passing comment on the closed and self-reinforcing nature of the professions, in this case the profession of cooking. It also seems to be saying something about Adrià’s relationship to culinary tradition. In certain dramatic and larger-than-life ways he embodies and epitomises the profound shift that has been taking place over the past forty years in attitudes to cooking and particularly to haute cuisine, away from processes of recovering and refining the old ways of doing things and more and more towards being adventurous and inventive and original.

In the food writing of the mid twentieth century, when M.F.K. Fisher and Elizabeth David and Julia Child and others like them were introducing vast numbers of readers to the long history and continuing vitality of the great cuisines, the language of approval centred on words like “authenticity.” The success of the dish hinged on its capacity to reproduce the way it should be done, as sanctified by tradition. This did not entirely rule out a role for creativity in the kitchen, for new ways of doing things or even for cutting the occasional corner, but these influential texts told their readers that there were clear historical parameters and that they were firmly set. For the serious cook, the message was, the past is always with us.

What is radical about Adrià is not so much that he rejects the culinary past – as Andrews makes clear, he is much more versed in and sympathetic to traditional ways of cooking than his critics typically allow – as that he is so fixed on the possibilities of the future. Adrià’s interest in doing new things in new ways drew him first to nouvelle cuisine, which appealed to his instincts for aestheticising food and for creating pictures on plates. (That early influence remains; Andrews describes a dessert he enjoyed recently at El Bulli as “sculpture on a plate, an evocative scene built from spice bread, liquorice, frozen chocolate powder and cherry sorbet.”) But nouvelle cuisine rapidly developed its own rules and conventions, against which Adrià began to strain.

Then came an epiphany, which Andrews pinpoints to 1987, when Adrià was included in a visit by Spanish chefs to the great restaurants of the Cote d’Azur. Following a demonstration in Cannes by the chef Jacques Maximin (described by the Guide Gault Millau, we are told, as the “Bonaparte of the ovens”), during which he had urged his audience to be creative in their cooking, somebody asked him what he meant by “creativity.” Maximin responded along the lines of “creativity means not copying,” and “this simple formulation, Ferran says, changed his life.” He threw himself single-mindedly into invention and culinary experiment. And by Ferran Adrià’s own admission, it’s been hard work to remain consistently inventive. “For a chef to make something new,” he says of himself, “after centuries of cuisine, that is incredible.”

For his admirers and detractors alike, Ferran Adrià’s reputation as the world’s most innovative cook rests on his unstoppable enthusiasm for science and technology and the roles they can play in helping him create new dishes and new techniques. Indeed some of those techniques are better known than he is: “cooking” with liquid nitrogen, for example, or producing “foams” out of unexpected, often unglamorous ingredients, or introducing “spherification” to the world, a method, as Andrews describes it, “for enclosing flavoured liquid in a skin of itself, as it were,” thereby creating a perfect, idealised version of the original. At one point in the narrative Andrews tries a “plump green pearl” made out of peas. “It was the very essence of peas,” he comments.

Andrews also credits Adrià with fundamentally changing the ideal of the fine dining experience from à la carte to dégustation, from one where the diner exercises a degree of influence by making choices from a menu, to one where the diner simply sits there, deferring to the artist and waiting for what comes next. Adrià discarded à la carte altogether in 2002. Fittingly for a technophile, he redefined the restaurant dinner as a series of culinary tweets, usually thirty or more of them in a sitting, each one a compact encapsulation of wit, inventiveness and flavour. Indeed, on many occasions Adrià has described his approach to cooking as inventing a new language. If so, it is a language of aphorism, in which a lot of meaning is packed into each very small dish.

The question is, what does all this meaning mean? That is where both cook and biographer do tend to hit a stumbling block. In more traditional cuisines, words like “authenticity” and “legitimacy” serve a purpose, linking the dish to history and presenting it as an embodiment of culture and values. But when the culinary imperative is to “make it new,” as it is for Adrià, this kind of terminology, which emphasises the past, doesn’t really apply. Instead, when his cooking is described, by himself and by others, the word that recurs is “purity” – as in “purity of flavour” and “purity of the ingredients.” “What we did was so pure,” recalls his long-time friend and colleague José Andrés of their early days at El Bulli. For Adrià and his followers, food takes on a metaphysical quality, in which the objective seems to be to create a dish that isn’t really food at all, but the idea of food. When Adrià moved on to the next iteration of his famous “foams,” his so-called “airs,” made by injecting the “maximum amount of air” into the ingredient, the result, says Andrews, was “just the ingredient, oxygenated almost to the point of abstraction – pure essence of flavour.”

In some ways Adrià’s career so far can be seen as a path to abstraction, towards some imagined point at which the dish he creates speaks only of itself. But in other ways he has been anything but abstract, precisely documenting his every move. Andrews himself seems almost overwhelmed by the quite extraordinary volume of documentation that Adrià has produced, or caused to be produced, about his own practice. He begins by noting that “no other chef has so precisely and exhaustively – obsessively is probably not too strong a word – chronicled his own professional life and the history of his restaurant.” The list of publications is indeed mind-boggling, including but by no means confined to the General Catalogue (five volumes and rising) which aims to record every dish ever created at El Bulli. The El Bulli (latterly styled elBulli) website is a vast compendium of documents and images that is regularly supplemented.

It currently includes a request – posted in the context of the recent announcement that the restaurant will close by 2012 and re-open in 2014 as an (as yet undefined) foundation – for anyone who has ever worked at El Bulli, beginning with its pre-Adrià incarnation in 1964, to send in their details, preferably with a photograph taken at the time. It is almost as if, retrospectively, Adrià is pulling together and celebrating the professional family that he lacked when he was starting out. For a man who looks so relentlessly to the future, he has an abiding sense of the past – specifically his own past – and of the history that he and his friends and colleagues have created. Today’s innovation could well be tomorrow’s standard, and thanks to Adrià’s compulsion to record, if that does happen then we’ll know just what to do when it comes to reproducing it.

For many readers of Colman Andrews’s account of the life so far of Ferran Adrià, the subtitle – “the man who changed the way we eat” – will strike a jarring note. While his influence on fine dining and high-end restaurant culture is clear, the impact he has had on the day-to-day preparation and consumption of food is less easy to define. For the sceptic, a recent press release announcing an alliance between Adrià and the telecommunications company Telefónica, aimed at turning El Bulli into “the most creative and innovative lab in the world,” will not be encouraging. “The idea,” Adrià is quoted as saying, “is to transform, once and for all, the relationship between creativity and society through the use of new technologies,” an idea that could be dismissed as just another kind of “air” – in this case served very hot.

And yet. While it’s too early to say for certain, Andrews’s subtitle could well turn out to be justified. Adrià has been influential in blurring the distinctions between categories of food – local and international, natural and artificial, raw and processed, delicate and robust, sweet and savoury, fast and slow. He has shown how domestic and restaurant cookery can learn from high-volume industrial processes, without necessarily seeing those processes as inherently evil. He has mixed ingredients and, perhaps more importantly, hierarchies of ingredients, as in the case of his famous or notorious (depending on your point of view) “Kellogg’s paella,” described by Andrews as “made out of puffed rice (think Rice Krispies) fried with saffron and mixed with tomato, prawn powder and raw prawns, and served with an ampoule of intense brown prawn extract to be squeezed directly into the mouth.” He has embraced and in some cases invented kitchen gadgetry and other products with what can seem like an undiscriminating fascination with novelty, but quite a number of these innovations are now in commercial production and may, in some cases, end up as part of the standard batterie de cuisine. Most of all perhaps, he has linked food and cooking to the spirit of the times, in which, with the help of the technology, anything is possible. •

Richard Johnstone is an emeritus professor at the University of Technology, Sydney.