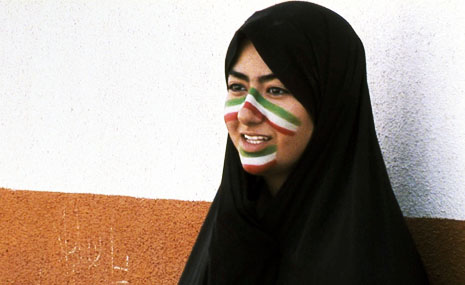 ON ITS opening weekend the huge Sydney Film Festival varied festivity with principled stance and protest, running features by Iranian directors Jafar Panahi and Mohammad Rasoulof. Both are currently under sentence by the Ahmadinejad government, not only to six-year jail terms; they are forbidden either to make films or to leave the country. The sentences are currently being appealed. Meanwhile, several films invited us to consider their modes of subversion for ourselves. In Panahi’s Offside, a few teenage girls disguise themselves in various unconvincing ways in order to mingle with the roaring crowd at a football game, Iran versus Bahrain; this is an ostensibly ordinary human world in which a young woman can be arrested simply for moving round the city on her own. They’re all detained, and penned in at the back of the stadium, managing to follow the game without seeing it; the action dissolves in anarchic derision, hilarity, sustained defiance. As Iran wins, so in a fashion do they.

The same director’s The Circle, made ten years ago, offers a darker version of the urban women’s story. The beginning says a great deal of it; as the credits come up we hear but don’t see the signs of labour and childbirth. The first images show the grandmother taking in the news; the baby is a girl; the grandmother visibly despairs. From her the film moves on to young women being hounded, pursued and imprisoned, though they do everything to dodge the authorities and to find a life. I’d seen The Circle before, and found it worth revisiting for its vitality, the rendering of Tehran as a crowded, living, untidy city, full of buying and selling, shouting and music. Panahi says that all his films are about restriction, which puts it a bit mildly; they are also about the resolve of the very vulnerable – like the children in The Mirror and The White Balloon; following them into danger, he’s very good at getting hearts into mouths.

The specific offences of Panahi and Rasoulof haven’t been announced; perhaps the regime is threatened by the uncompromising ways in which they show oppression and underprivilege. Rasoulof’s film Iron Island shows a huge, rusty, tanker, moored in isolation somewhere in the Persian Gulf. Under the patriarchal guidance of Captain Nemat (Nemo?) a community of the poor and homeless tries to establish a workable village on board. The image of the tall ship, solitary and obviously unseaworthy, standing there in wide, calm water is very powerful; the suggestion is of a major, looming disaster that’s not to be avoided. Allegory abounds, but the film works on the immediate, material level as well, gathering small narratives together, finding minimal hope; lives may be salvaged, if the ship itself must sink. Perhaps the Ahmadinejad regime can read cinematic suggestion only too well.

The most complex of the Iranian works is Asghar Farhadi’s A Separation; while Farhadi is not one of the directors under sentence, he has defended them and is in some trouble on that account. His film should be set as a text in legal ethics courses, taking up as it does questions of the gaps of understanding between speaker and hearer, of status and gender, of the claims of old age and equally those of childhood when parents divorce: just about everything on your list. The story involves the setting of a hard decision upon a child; I wondered, had The Caucasian Chalk Circle never played in Tehran? Fortunately, this one is to go on general release; and it won the Sydney Film Prize. It is excellent to see this local award given to a film so deeply intelligent.

The Iranian films shared the long weekend with the most unlikely companions; this year’s retrospective took up five of Douglas Sirk’s fabulous 1950s melodramas, Hollywood artifice at its long-ago extreme. The backward prospect of more than half a century allows pleasures we thought we couldn’t afford in the 70s, excess, absurdity and all. It permits the clearer perception of subversion and ambiguity in the compositions, the immaculate interiors and beautifully clad personae inhabited by Jane Wyman, Lauren Bacall and Lana Turner. When it came to the political domain, the overblown glories of Imitation of Life (1959) should have carried the message on racial equality further than ever it went with Guess Who’s Coming to Dinner. There are prancing horses and haystacks of flowers for the black housekeeper’s funeral, and beyond all that, Mahalia Jackson sings.

The 1950s, of course, didn’t really know that race relations in American history involved old stories other than south versus north, African-American and white. The splendid documentary on the life and times of Harry Belafonte takes in the struggles of Native Americans as well; but that film belongs to the present, and to the remarkable singer’s own present 80s. There were surprises; linking him mainly to the charms of “Banana Boat Song” and Carmen Jones, we hadn’t known that Belafonte was so closely involved with the civil rights struggles, out there with Dr King and Bobby Kennedy all the time, and on stage with Miriam Makeba. The film on her life, Mama Africa, is even stronger, not to be missed when it comes up on TV; the story of a great singer who was forced to live much of her life in exile, and who, even in post-apartheid South Africa, went on communicating the meaning of that kind of loss.

In an Australian audience, such works leave major questions in their wake: where are the films of equal passion on race relations here? The answer is that they exist, they have been made and modestly circulated over many decades, and they are often forgotten. The Message Sticks program, discussed recently here, brings new works of Aboriginal authorship to small and special publics. The facts and consequences of radical dispossession have become part of the hanging backdrop of history, part of what all of us live with, and that knowledge has spread, if too slowly, since the 1960s. Ivan Sen’s new feature, Toomelah, got a great welcome from the festival audience, confronting as it is. The location is a tiny, poor community; Toomelah has grown out of an Aboriginal mission, somewhere between Moree and the Queensland border. Within it, parents are missing in action, schoolteachers struggle, grandparents give love but little direction, and a ten-year-old kid like Daniel (Daniel Connors) can easily get involved with older blokes who are up to no good at all. Toomelah is too small to be marked on the maps, but is still a point on the drug trails. As he did in Beneath Clouds, Ivan Sen leaves us with a narrow crack of daylight, a tenuous hope for Daniel. What everyone was asking at the end was: what’s ahead for him, and for the other kids of Toomelah? Why does Australia still neglect such places – and there are many Toomelahs? The questions have their weight because Sen manages a great balancing act, between grave, clear cinematic eloquence and address to very difficult content. After Samson and Delilah, this film widens the canvas. It deserves the widest possible circulation.

I SAW about a tenth of the festival’s huge program – 161 films, with forty-two countries represented. At that rate you may find (at least) twelve people who saw twelve different festivals, and I can’t claim to speak for the other eleven. As I saw it, documentary supervened. Tom Zubrycki’s The Hungry Tide explores the effects of climate change and rising seas on the small Pacific nation of Kiribati – a scattering of sandy atolls – and the work of one of its citizens, Maria Tiimon, to spread the news internationally. Maria is seen at her job with an NGO in western Sydney, failing to make it home for her mother’s death, worrying for her father, and at Copenhagen in December 2009, pleading for her sinking nation; growing into her public speaking roles, and returning to Kiribati as one of a delegation led by Patrick Dodson. This is a marvellous film, strong in narrative, imagery, argument and character. Every politician should be obliged to watch it. (The Melbourne Film Festival will screen it on 1 August, and there will be a fund-raising screening for aid to Kiribati on 5 August at the Chauvel in Sydney.)

One documentary I want to see again for its sheer energy is Khodorkovsky, the German director Cyril Tuschi’s contemporary history-essay on the Russian oligarch who, after making billions from the oil franchise he acquired under Yeltsin, is now in deep trouble with Putin, and consequently in jail in Siberia, with the sentence recently renewed for another six years. He has been arrested for money-laundering, tax evasion and the like, but his real offence has evidently to do with speaking out against repression and in favour of open democracy. The man himself is interviewed in the dock; otherwise we see little of him, and the story is told through other people’s comment and recollection, with passages of forceful and elegant animation. There are sparse, shadowy passages from Arvo Pärt, who has dedicated a whole suite to Khodorkovsky; the elements were finely judged.

Music was a point of argument, however, with Cave of Forgotten Dreams, Werner Herzog’s remarkable 3D work on the prehistoric cave art of Chauvet-Pont d’Arc in southern France (for which festival staff sold us the required glasses, at $1 a pop). Archaeologists marvel at the processions of bison, woolly mammoths and rushing horses, drawn in dark charcoal on the walls of deep caves to which access is now mostly forbidden; the film crew was allowed to join them, with special lights that emitted no heat. Perhaps the drawings are 32,000 years old, perhaps less; they are believed to be much older than those of Lascaux. They remind one researcher of the Bradshaws in the Kimberley, and we can only wonder at their origins and their survival. Ernst Reijseger’s music is rather insistent, with much organ and cello, and choral passages ascending; a bit over the top, people said. But this is an extravagant director who has often believed he can film ancient secrets, and the intention is probably to communicate boundless time, mystery and distance. Inexplicably, Herzog finishes with a coda on albino crocodiles swimming in the runoff from one of France’s many nuclear reactors; but you can shed his pseudo-philosophic gestures, and keep the memory of the cave art, the lively animal forms and the human handprints. “They were here!” says one archaeologist in delight.

Thus film festivals set off arguments worth having. To some of those, I hope to return. •

The return of the local 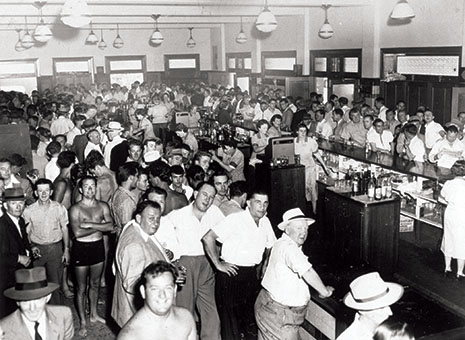