Asking the wrong questions about gambling

Are Australian gamblers getting value for money, asks Darryl Woodford 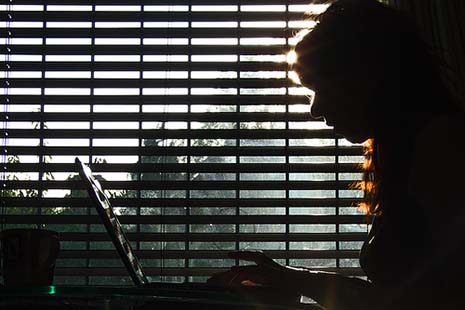 OVERSHADOWED by the debate about the government’s media legislation, the final report of the review of the Interactive Gambling Act 2001, published last week, received comparatively little attention. Like the government’s response to the report, the sparse media coverage focused on measures to prevent problem gambling – undoubtedly an important issue – but failed to discuss the fact that Australian gamblers, recreational or otherwise, continue to get a raw deal. The report seems likely to perpetuate a culture of high-margin, low-risk bookmaking, cutting Australians off from the global market under the guise of consumer protection. Also missing from the debate are two other questions: are Australian gamblers getting value for money, and where do the growing number of social games fit into the regulatory landscape?

The review’s suggestions for expanding the industry are predicated on the adoption of a proposed “national minimum standard for harm minimisation,” which seeks to iron out differences between states by focusing on responsible gambling messages, credit, pre-commitment, age verification, spend-tracking and self-exclusion, as well as measures to ensure that companies hold sufficient funds to pay out winnings. Among the review’s recommendations are measures to encourage unlicensed operators to commit to Australian regulations, along with further limits on advertising, much of which has been discussed elsewhere.

Underlying the recommendations is the review team’s belief that Australian consumers who use overseas-based online gambling services “run the risk that their funds will not be afforded an appropriate level of access and protection” and “are not covered by Australian consumer laws if they wish to make a complaint about the actions of a service.” The reality, however, is that the level of consumer protection in the Australian gambling industry doesn’t always live up to the rhetoric. It seems strange, for example, that the report, which runs to some 183 pages, makes no mention of Australian bookmaker Sports Alive, which collapsed in 2011 owing about $3.9 million, having allegedly traded while insolvent.

Earlier this month, Victorian Supreme Court Justice Ross Robson found that Sports Alive had failed to keep customer funds segregated from operating expenses, and so had insufficient funds to pay customers at the point of liquidation. His ruling notes that the evidence suggests “a wholesale failure by Sports Alive to comply with its statutory obligations,” which led punters’ representative Dennis Tuan-Mu to complain that the ACT Gambling and Racing Commission had failed to act for “more than eight years” and “that even rudimentary checks… would have uncovered these issues… and would have prevented the loss of $3.9 million from over 18,000 account holders.”

Australia excels in some areas of gambling regulation – the NT Racing Commission’s transparency regarding betting disputes is a good example – but the core objective of all regulators must be to keep customers’ funds safe. Before we ask internationally licensed operators to subscribe to Australian regulation, protection is needed to ensure there is no repeat of the Sports Alive fiasco.

Licensing and regulating is an expensive process, so it would seem logical for there to be some cross-recognition of best-practice regulation. For example, would it not be feasible to allow UK-licensed operators access to the Australian market (and vice versa) rather than requiring operators to apply for licences in each jurisdiction? Doing so would promote competition, reduce margins, and encourage gambling operators to agree to some form of governmental oversight.

SIGNIFICANTLY, the report also fails to tackle the business model of Australian bookmakers. A 2012 survey that compared the average “price” of a bet across a range of sports found significant differences between companies. At the bottom of the table – from a punter’s perspective, that is – was TAB Sportsbet, a frequent advertiser on Australian sporting broadcasts, with an average margin of 6.7 per cent. The mainstream corporate Australian books, including Bet365, Sportsbet, Sportingbet and Luxbet, ranged from 4.9 to 5.9 per cent, while the betting exchange Betfair’s margin averaged 4.5 per cent. By contrast, Curaçao-based bookmaker Pinnacle Sports – one of the offshore companies that would be prohibited under the review recommendations – averages just 2.2 per cent. In short, for every $100 they bet at TAB Sportsbet, Australian consumers pay up to $4.50 more than if they were betting with Pinnacle. When you consider that gamblers are not buying one-off products, but rather recycling those funds, these margins quickly add up.

On top of that, the current Australian online betting model is anything but customer-friendly. Writing in the Sydney Morning Herald, Peter FitzSimons has described how internet bookies “will only take bets from new losers, established losers and yet-to-be-confirmed losers.” While this is also the practice of many European bookmakers, Australian operations are among the worst culprits, frequently limiting or closing the accounts of punters who demonstrate profitability. Australian online consumers are not only charged more for bets, but they are also effectively prevented from placing long-term winning bets.

According to Andrew Wilkie, the anti-gambling independent MP, blocking payments to overseas websites would steer most people towards “safer, well-regulated domestic sites.” Total prohibition on access to overseas sites is impossible, he concedes, but blocking payments “would be likely to dissuade all but the most determined.” In fact, the most determined gamblers are likely to be the ones who are making a profit, or at the very least those who are price-sensitive and aware that they can get a better deal offshore. What a ban will do is feed the most at-risk Australian gamblers directly into the Australian industry, an industry that is designed to appeal to losing customers, charges them more for the privilege – twice the level of some overseas operators – and reserves the right to ban any customers who look as if they will win in the long term.

From an international perspective, it would be tempting to describe the Interactive Gambling Act, and the recommendations of the review, as both protectionist and hypocritical, especially given that Australia joined Antigua in taking World Trade Organization action when the United States sought to ban international gambling operators, and given that the Interactive Gambling Act makes specific allowance for Australian companies to offer prohibited gambling services to international customers. With the federal government recently summoning companies including Apple, Adobe and Microsoft to appear before a parliamentary inquiry into price gouging of Australian customers, Australia’s treatment of local licensed betting firms seems inconsistent, to say the least.

THE report also draws attention to newly developing areas, such as social media and fantasy sports, as potential targets for future regulation. It focuses especially on the potential of Facebook games that mimic gambling activity, such as Slotomania or Zynga Poker, to normalise gambling among young players. The report notes investment in game developers by traditional casino operators such as International Game Technology, a manufacturer of slot machines, and Caesar’s Entertainment, owner of more than fifty casinos. As Ralph Topping, the CEO of gambling company William Hill, argues in a passage quoted in the report, “a child can buy chips to play an online slot which is almost as good as anything you find on William Hill Online… In fact, it might even pay out more than a slot you might find on an online gambling site, which could also encourage the vulnerable… But that’s OK because the chips aren’t real money. Or are they?”

Many of these games allow players to purchase virtual chips for real currency. They are not prohibited under the Australian Act, says the report, “as they do not satisfy the definition of a gambling service, due to the virtual currency not being redeemable for real money or anything else of value.” The report recommends only that “popular social media services, mobile content providers, console providers and online game developers closely monitor the impact of their user policies regarding the provision of online gambling services (both licensed and unlicensed) as well as gambling-style services that are popular with children to ensure the implementation of these policies aligns with Australian laws and community expectations.” It also recommends, subject to future proposed research, that the Department of Broadband, Communications and the Digital Economy consults with gambling regulators in “like-minded countries” to consider “potential measures to address the access and marketing of online gambling-style services to children.”

These examples of gambling simulations, described as “gambling-like” in the report, are merely symptomatic of the increasing tendency of social games to use various techniques to slow players’ progress through the games and encourage them to spend real money to advance. In Facebook games such as Hunger Games Adventures (based on the popular book and film franchise) and iOS games such as The Simpsons: Tapped Out (based on the TV show), the number of actions players can make is limited by mechanics such as currency or energy, which are only refilled with the passage of time. Thus, to progress in the game, players can choose to wait for a period of minutes (or hours or days at later levels), or choose to spend real money to get moving again.

Tadhg Kelly argues that “when you strip away the graphics of these [social] games, what you are left with is simply a button… You push it and then the game returns a value of either Win or Lose.” While “every game developer wants their game to be played, preferably addictively, because it’s so awesome,” mechanics frequently lead not to “addiction of engagement through awesomeness” but “the addiction of compulsiveness.” Kelly concludes that “the reality is that they’ve actually sort-of kind-of half-intentionally built a virtual slot machine industry,” in which “energy is the same as coins.”

In many ways, these games – straight gambling simulations or otherwise – are much worse than the traditional gambling activity considered by the review of the Interactive Gambling Act. In her book Addiction by Design, Natasha Dow Schüll argues that it is not the money that is significant in slot machines, but a sense of escape: players see the machines as placing them in a trancelike state referred to as the “machine zone.” If social games are able to replicate this compulsion, as Kelly argues, then these games will encourage participants to deposit funds in order to stay in the zone with guaranteed zero financial return. Compared to blackjack (where the average player loses just 0.2 per cent of what he or she bets per hand), or even the pokies that Wilkie wants to ban (where, by law, the average loss is limited to 13 per cent of what a player may bet on each spin), this is clearly a terrible deal.

By limiting the scope of its analysis to games with cash prizes on the outcome or cash at risk during the game, the review has missed the wider picture. Which gambling operator, given the choice, wouldn’t happily accept real-money bets they will never have to pay out on? •

Darryl Woodford is a researcher in the ARC Centre of Excellence for Creative Industries and Innovation, based at Queensland University of Technology. His research includes works on social media and the video game and gambling industries. 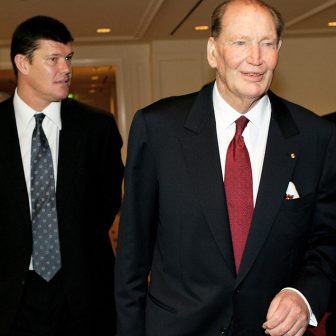 Essays & Reportage The rise and fall of an Australian dynasty Rodney Tiffen 22 November 2021 The Packers maintained their wealth and power through almost four generations. Then things went wrong 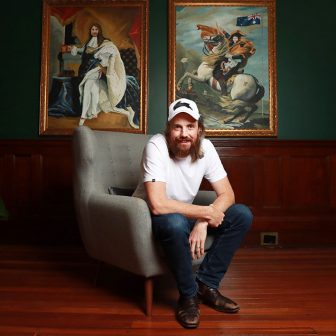 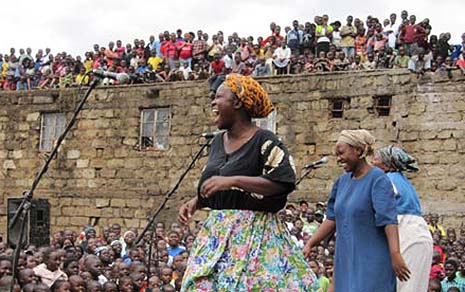