At last, an independent reviewer of terrorism laws

After a string of inquiries recommending reform, new federal government legislation will create a security law monitor. It’s not a perfect plan but it’s a strong start, write Andrew Lynch and Nicola McGarrity 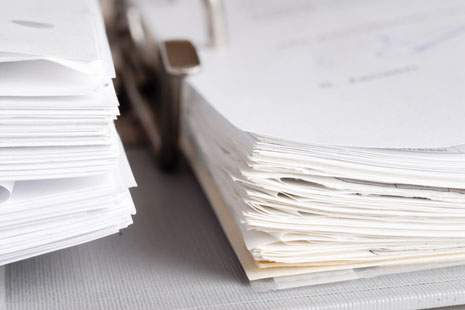 GIVEN the Rudd government’s well-known tendency to wrap interesting ideas in pedestrian prose, it should have come as no surprise when attorney-general Robert McClelland announced that the new office to review the impact of anti-terrorism laws would be called the National Security Legislation Monitor. This important initiative has been proposed by almost all participants in the debates about Australia’s anti-terrorism laws in recent years – but never under this title.

The Monitor is directly modelled on Britain’s Independent Reviewer of Terrorism Laws – a name that conveys a lot more about the “watchdog” role of the office. The origins of the independent reviewer lie in the legislative responses to political violence stemming from the conflict in Northern Ireland, but it has assumed a far broader importance in the wake of 11 September 2001. As fate would have it, it was on that very morning, just hours before the attacks on the United States, that the British home secretary, David Blunkett, contacted Lord Alex Carlile QC and offered him the position. Carlile has been doing the job ever since and has played a striking role in the legal and political process surrounding British counter-terrorism.

Carlile provides annual reports on the operation of various British anti-terrorism laws – most notably the control order regime, which must be renewed each year by parliament. (Australia’s control order scheme, by contrast, was given a full decade’s life – it will not be reconsidered by our political masters until 2015.) Carlile’s reports are seen as an integral tool in parliamentary deliberation over the continuation of the orders.

Inevitably, Carlile’s contributions to the ongoing debate about how best to achieve security without sacrificing liberty attract a fair degree of controversy. His support for the control orders as a “justifiable and proportional safety valve for the proper protection of society” was welcomed by the Labour government but not everyone else. Quite aside from civil rights groups such as the influential Liberty, other institutional actors have offered differing perspectives on some of these issues. In particular, Carlile’s views about the fairness of the process by which a control order is imposed have been repeatedly rejected by the bipartisan Joint Committee on Human Rights. More conclusively, in judicial decisions in 2007 and earlier this year the House of Lords has confirmed that, despite Carlile’s confidence in the control order regime, some of its procedural aspects are in clear tension with the Human Rights Act 1998 and require refinement.

Carlile has also attracted criticism from some quarters for his willingness to support tough new anti-terrorism measures even before they are enacted. Of these, his strong support for the extension of pre-charge detention from twenty-eight to forty-two days (even going so far as to write a criticism of the shadow home secretary, David Davis, who resigned to fight a by-election on the issue in June 2008) led some to see him as more of an “advocate” for the anti-terrorism laws than their impartial assessor.

Lord Carlile visited Australia in June and met with both the federal government and opposition. A genial fellow, and quite the raconteur, he was very willing to discuss his role with us and explain what he believes it brings to monitoring the use of strong anti-terrorism laws in the jurisdiction which has most influenced the content of Australia’s approach in this area. But it is difficult to escape the sense that this is a very “British” sort of office. It’s difficult to imagine someone with Carlile’s professional history being given the job in Australia or operating in the way he does.

For example, as well as being a well-respected and highly successful member of the English bar (among his career highlights is the successful defence of Paul Burrell, Princess Diana’s butler, who was accused of making off with her personal effects), Carlile has had a long engagement with political life as, first, a Liberal Democrat MP between 1983 and 1997 and then as a life peer in the Lords since 1999, where he is party spokesman on mental health and disability. Even allowing for the rather odd culture of Britain’s upper house, one can scarcely imagine the Rudd government appointing a former, let alone a sitting, member of parliament to the position of National Security Legislation Monitor.

This relaxed overlapping of roles and responsibilities is, of course, a hallmark of English constitutionalism more generally. Public institutions are not so much “designed” as serendipitously develop as needed, frequently on the hop. It is for that reason that no single statute exists establishing the office of independent reviewer and comprehensively setting down his role and functions. Having been created through letters patent, the position has taken on new tasks by accretion. Carlile evidently views himself as having an expansive brief: he has produced reports on definitions of terrorism and commented not only on his government’s involvement in the extraordinary rendition of civilians but even on the design of cells for terrorism detainees.

Carlile says he needs no clear coercive and investigatory powers because of his ability to “name and shame” those who obstruct his work. As we said, it’s a very “British” approach... Even so, and whatever one may think of Carlile’s reports and other public statements, the very existence of his office and his annual reports amount to a solid safeguard for individual liberty. It would have been strange if Australia hadn’t recognised the need for a similar watchdog.

So the tabling of the National Security Legislation Monitor Bill 2009 in the final week of the winter sitting of federal parliament was very welcome. Last year, the government shot down an effort by Liberal MP Petro Georgiou to establish a similar position through a private members bill. That bill received the full scrutiny of a Senate inquiry but the government was unwilling to have its thunder stolen. It insisted it would set the agenda – and only after the inquiry into the bungled prosecution of Mohamed Haneef was concluded.

They need hardly have waited. The idea of an Australian office charged with scrutinising the many anti-terrorism laws introduced since September 2001 is not new. Georgiou first raised the prospect of an independent reviewer of terrorism laws back in 2005, during pitched battle over controversial new anti-terrorism laws dealing with sedition and control orders. Since then, two inquiries of the Parliamentary Joint Committee on Intelligence and Security and another convened by Philip Ruddock as attorney-general have all strongly endorsed the need for this office.

HOW DOES the Rudd government’s new Monitor stack up against the British office on which it is based? The first point of difference is highlighted by the fact that, with Carlile soon to retire as independent reviewer, the British government’s failure to detail the functions and powers of the independent reviewer in legislation means that a future reviewer may take a more narrow approach to his or her role. Robert McClelland’s bill avoids this danger by setting out the functions of the Australian Monitor in deliberately wide terms. The Monitor is given the task of reviewing Australia’s anti-terrorism laws in light of international human rights principles to see whether they contain adequate safeguards for protecting the rights of individuals. Even more valuably, the Monitor is required to get to the heart of the matter: to decide the fundamental question of whether these laws “remain necessary.” Acting within these stated purposes, the Monitor is able to set his or her own agenda, taking the initiative to commence inquiries or receiving matters referred by the prime minister.

Second, in order to defend his findings, it has been important for Carlile to be able to stress his independence. He maintains his private practice at the English bar and believes this sends a strong message about his impartiality. In this light, it is a good thing that the Australian office will be part-time, enabling the Monitor to engage in outside business activities and thus maintain financial independence from the government.

But further steps might have been taken to ensure the public sees the Monitor as strictly impartial. One way this might have been done would be to have included the word “independent” in the title of the office. Additionally, it would have been preferable for the Monitor’s reports to be presented directly to federal parliament, rather than to the prime minister personally. Most worryingly, the legislation allows the prime minister to ask the Monitor for a private progress report on any review before the final report is concluded. That seems an odd way to guarantee true independence.

Lastly, the Australian office will have considerable teeth. While Carlile has been happy to wield influence over intelligence agencies and individuals through his ability to “name and shame” in his reports, the difficulties which the Clarke inquiry had in getting the full cooperation of various political players and the Federal Police are a good indication of the limits of such a technique in Australia. So it seems wise that the government’s bill makes it a criminal offence (carrying a possible jail term of six months) to fail to assist the Monitor.

A point of clear similarity between Britain’s independent reviewer and Australia’s planned Monitor is that the office is filled by a single individual. The undesirability of this was recognised both by the Security Legislation Review Committee and by the Senate inquiry into the 2008 Georgiou bill. Although Carlile says it would be impractical for a committee or a trio of reviewers to report on anti-terrorism laws because they could all too easily diverge in their assessment, surely that goes to the point? The danger of a single reviewer is that the individual’s opinion on what are undoubtedly contentious and thorny issues would be given too much weight. In Britain this has been very noticeable when the unanimous and measured recommendations of parliament’s Joint Committee on Human Rights have struggled for a hearing from the government, which has chosen to rely instead on Carlile’s endorsements. The Monitor legislation could be enhanced by the appointment of not just one, but three, part-time reviewers of the laws.

The government is to be congratulated for introducing an initiative that their predecessors resisted for no good reason. Overall, the bill gets the Monitor off to a good start by virtue of the clarity with which it establishes the functions and powers of the office. Time will tell how valuable the new Monitor’s contribution will be – and making a good appointment will in many ways be the real challenge.

Despite the strong support for a watchdog over Australia’s anti-terrorism laws, the office is ultimately a reactive one. Far more than a sophisticated means of post-enactment scrutiny, the community would benefit from legislators conducting themselves soberly in the first instance. If parliamentarians did not lose their heads when rushing to create more, and yet more, new security laws of little relevance to combating the domestic threat, then the case for a Monitor would be nowhere near as compelling. •

Andrew Lynch and Nicola McGarrity are with the Gilbert + Tobin Centre of Public Law at UNSW. 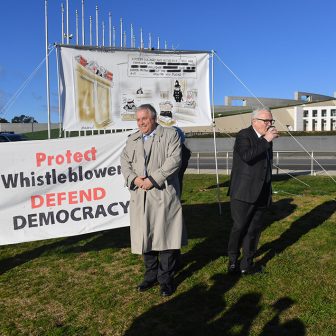 Digital TV is already here, and it means Roger Federer might be replaced by blank screens in Mildura’s analogue households next year, writes Jock Given

Roger Federer holds up his trophy after his five set match against Andy Roddick in the Men’s Singles Final at Wimbledon on 5 July 2009, his record fifteenth grand slam title. Tim Clayton/AAP Image 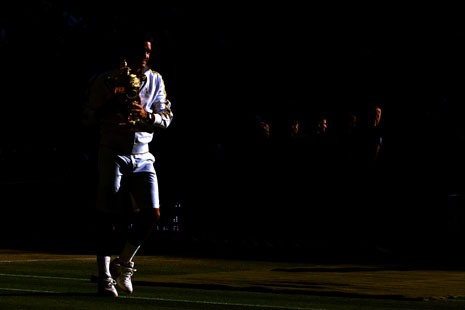 Roger Federer holds up his trophy after his five set match against Andy Roddick in the Men’s Singles Final at Wimbledon on 5 July 2009, his record fifteenth grand slam title. Tim Clayton/AAP Image