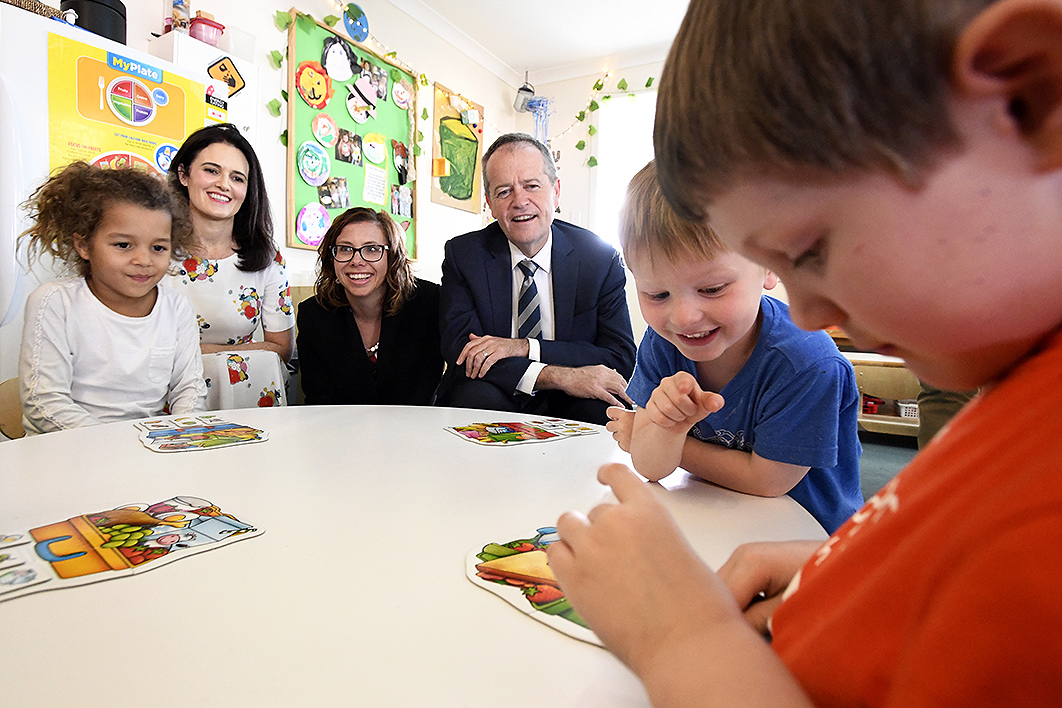 Federal Labor’s plan to fund two years of early learning has won a new friend, with former NSW education minister Adrian Piccoli describing it as “a great step in the right direction.” Piccoli, who was once deputy leader of the state Nationals, offered the appraisal at the National Press Club on Thursday as he threw his weight behind a campaign calling on the government to match Labor’s commitment. “The provision of free early childhood education and care for three- and four-year-olds for at least two days a week is the next great social policy reform in Australia,” he declared, likening it to needs-based school funding and the National Disability Insurance Scheme. The campaign, launched by providers of early learning and care services, is designed to pressure the Coalition in marginal seats in the lead-up to the federal election.

At present, the federal government subsidises fifteen hours a week of preschool for four-year-olds through a deal with the states and territories called the Universal Access National Partnership. But it has still not committed any funding for 2020, preventing preschools from signing long-term leases and contracts or preparing their budgets. Meanwhile, it shows no sign of following Labor’s lead and extending the subsidy to three-year-olds.

Under attack in parliament last week, education minister Dan Tehan was keen to change the topic. The real point, he said, is that the Coalition is able to fund services because it runs a strong economy, at which point he segued into the story of a self-funded retiree aggrieved by Labor’s dividend imputation policy. Warming to the theme, assistant children and families minister Michelle Landry told the House, “We are building a strong economy, and part of that is because we are not afraid to stand in this place and say a certain four-letter word, and that four-letter word is ‘coal.’”

Among the many shortcomings of the government’s response has been its failure to engage with the compelling economic and fiscal case for investing in early childhood education. As their erstwhile Coalition colleague Adrian Piccoli told the Press Club, “There are significant economic benefits, both from a workforce participation perspective as well as economic benefits from improved performance in education.” Or, as Susan Pascoe and Deborah Brennan write in Lifting Our Game, their report for the Review to Achieve Educational Excellence, “there is considerable and consistent evidence that investment in quality early childhood education has a strong return on investment.”

One of the numerous examples cited by Pascoe and Brennan is a study of the impact of Spain’s decision to include three-year-olds in public preschools in the 1990s. The study, conducted by researchers at Utrecht University, found that the Spanish reform ultimately returned four dollars for every dollar spent. While increased workforce participation was a factor, the researchers concluded that “the gains for children are the major driver of the total societal gains of universal ECEC [early childhood education and care].”

To understand why this is so, we need to recognise that “the past twenty years has seen an explosion of research on how brains develop and a wholesale rethinking of how children learn,” says Stacey Fox, a leading Australian early education researcher who spoke alongside Adrian Piccoli at the Press Club. “We now know that in the first five years children learn more and learn faster than at any other time in their lives,” Fox said. “By the age of five a child’s brain has reached 90 per cent of its total growth.” So what happens before primary school even begins will shape the fundamental architecture of a child’s brain, forming the foundation for all future learning.

In this critical developmental window, play-based learning is an extension and enrichment of the natural tendency of children to explore, discover, improvise and create. By way of example, Fox referred to children building a castle out of blocks, an activity that in itself will develop their fine motor skills. But if the castle falls down because it lacks a stable base, an educator might prompt the child to ask why or to rebuild it in another way. The activity might even evolve into an impromptu experiment to compare the stability of two castles. Then, when another child comes along and knocks the castle down or wants to build something else, “the educator helps mediate that moment; helps coach them in how to resolve that conflict; gives them tools and tips on how to manage their emotions: take a deep breath; think about what’s going on for the other child.”

If everyone gets interested in building a castle, it might be possible to develop a sequence of learning that extends children — the history of castles; how bridges work; an excursion to see a bridge — and gives them a chance to try, practise and consolidate new know-how. “It’s really skilled early childhood educators who create those opportunities and extend the learning that’s going on moment for moment for each of the children,” Fox observed.

The evidence of the longer-term significant impact of interventions like these is essentially beyond dispute. As the Productivity Commission outlined in its most recent five-yearly productivity review, “There is evidence of immediate socialisation benefits for children, increased likelihood of a successful transition into formal schooling and improved performance in standardised test results in the early years of primary school as a result of participation in preschool programs. The benefits are even greater for children from disadvantaged backgrounds and can persist into adulthood.”

The Longitudinal Survey of Australian Children came to a similar conclusion. It found that preschool attendance was associated with improved performance in Year 3 NAPLAN tests in numeracy, reading and spelling, equating to fifteen to twenty weeks of schooling. Across its member economies, the OECD’s Starting Strong 2017 report found, the average advantage in science performance among fifteen-year-olds who attended two years of preschool equated to half a year of formal schooling.

These findings support the conclusions of seminal studies like Britain’s Effective Provision of Pre-School Education (EPPE) project, which tracked 3000 young people over a decade and a half and found that, at age sixteen, students who attended two years of preschool achieved higher overall exam scores and better grades in English and maths.

Children from disadvantaged backgrounds are overrepresented among the 22 per cent of school starters who are considered to be developmentally vulnerable, and stand to gain the most from access to two years of early childhood education. A critical challenge lies in the fact that enrolment and consistent attendance are not the same thing. Ninety-six per cent of four-year-olds are enrolled in preschool, but around 30 per cent are not regular attendees. As Dan Tehan told parliament, “35 per cent of vulnerable and disadvantaged children and up to 41 per cent of Indigenous children are not attending for the fifteen hours on offer.” It is a very real problem, even if it is unclear how the minister believes the government’s refusal to commit funds will help.

In this connection, Stacey Fox praises the Victorian government’s Access to Early Learning program, which identifies barriers to attendance and assists families to locate, enrol in and engage with early childhood programs. “They actually work in the local community to work out what those barriers are and to get rid of them, and really work with families to help them understand why early childhood education is every bit as important as school,” Fox said. “I’ve seen the evaluation results of that particular model and it was really effective.”

In their report, Susan Pascoe and Deborah Brennan highlighted the NSW government’s Start Strong program. It requires at least three-quarters of any funding increase to providers to be passed on in fee reductions (a government-imposed discipline that is almost unimaginable in dealings with fee-charging primary and secondary schools). The requirement, as Pascoe and Brennan noted, saw some preschools dropping their fees to the levels of a quarter of a century ago (again, pretty much unimaginable in the compulsory school sectors).

At heart, Adrian Piccoli’s message to Minister Tehan (and the treasurer and the prime minister) is a simple one. “Budgets are moral documents. They say what you think this country should be about.” If the Morrison government doesn’t heed the moral and policy imperative to expand early childhood education, it might be forced to reckon more closely with the political considerations. As Piccoli pointed out, “early childhood resonates with voters; it’s a major cost-of-living issue.” Public support for Labor’s position is at 77 per cent, according to polling conducted by Essential Media, and even higher among the 11 per cent of voters with children under five. It might pay for the government to bring more than coal and franking credits to the debate when it returns to parliament in April. •

Tom Greenwell is a Canberra-based teacher and writer, and a Professional Associate of the News and Media Research Centre at the University of Canberra.