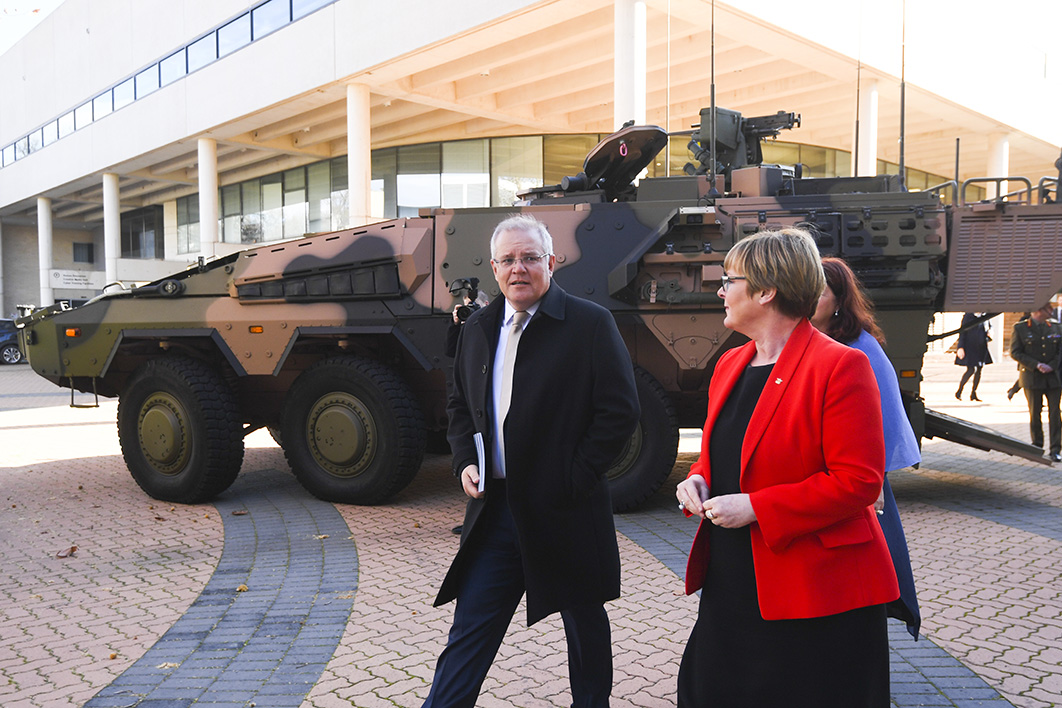 All in this together: prime minister Scott Morrison and defence minister Linda Reynolds arrive at yesterday’s launch at the Australian Defence Force Academy in Canberra. Lukas Coch/AAP Image

With its 2020 Defence Strategic Update and its 2020 Force Structure Plan, released by prime minister Scott Morrison this week, the defence department has done a professional job of describing the deterioration in Australia’s strategic environment and how it proposes to use extra funding to reshape and strengthen the Australian Defence Force. The fact that the second of those documents discusses issues like the future shape of the ADF workforce and onshore supplies of fuel and ammunition shows the department is giving serious if prosaic matters serious thought.

In a nutshell, the documents see a region rendered more turbulent and uncertain not only by strategic competition between China and the United States but also by Covid-19 and its consequences, and rendered more threatening by increases in advanced military capability across the region. They propose a tighter focus on defending Australia by dominating our immediate surrounds, recovering our technological edge, and being able to project serious force at greater range. And there are nods in the direction of strengthening our independent war-fighting capability. So far, so good.

While experts will debate whether the documents are an adequate response to these challenging circumstances, any attempt to judge the totality of the government’s response must also look at the context in which they are written. The department’s civilian and military experts are constrained by the government’s worldview and can only devise those parts of the solution that involve the use of military force.

An important problem with the government’s worldview — admittedly shared widely in the defence community — is that the solution to every military problem is to strengthen what prime minister Scott Morrison referred to yesterday as “our ever-closer alliance with the United States.” There are several problems with being, as Malcolm Turnbull put it, “joined at the hip” with the United States.

The first of these is that the formal obligations created by the ANZUS treaty are quite weak, reflecting the lack of enthusiasm with which the United States came to the party in 1951. The treaty partners — Australia, New Zealand and the United States — have no more than an obligation to “consult together whenever in the opinion of any of them the territorial integrity, political independence or security of any of the Parties is threatened in the Pacific,” and then, having done so, to “act to meet the common danger in accordance with [their] constitutional processes.”

And while we in Australia tend to regard ANZUS as extending a “nuclear umbrella,” one would have to wonder why any nuclear power, confronting a nuclear adversary, would use or threaten to use nuclear weapons in circumstances other than countering a direct threat to its own homeland.

Nevertheless, our political leaders have elevated the treaty to such a point that, rather than serving the national interests of Australia, it is used to determine where Australia’s national interests lie. And that means we must participate in all American-initiated conflicts to show we are a good ally.

This attachment to ANZUS as the linchpin of our defence collides with the government’s direction to focus our defence preparedness on our own region. Old habits die hard. While the prospect of operations further afield will not be permitted to shape the ADF’s force structure (something Kevin Rudd said in his 2009 white paper), the prime minister couldn’t refrain from affirming the old thinking: “We remain prepared to make military contributions outside of our immediate region where it is in our national interest to do so, including in support of US-led coalitions.”

Given the regional uncertainties described by the government, why on earth would we commit forces to military conflict outside our immediate area of interest? Dominating the approaches to Australia will be challenging enough without getting military assets stuck on the very sticky flypaper of avoidable military conflict. We committed troops to Afghanistan in 2001 and we are still there. The navy started conducting “maritime security” operations in the Middle East in 1990, and we’re still there too, and we also have aircraft and hundreds of support personnel engaged in operations in that region.

A deeper problem with the alliance relationship is a technological dependence on the United States that can leave us subject to American coercion when we choose new technology. We are not only dependent on the United States for maintenance and resupply of sensitive components of our advanced hardware, we also need access to US systems for the very operation of aircraft like the F-35 Joint Strike Fighter and the Wedgetail Airborne Early Warning and Control Aircraft. As a parliamentary research paper observed as long ago as 2001, “it is almost literally true that Australia cannot go to war without the consent and support of the United States. This represents a substantial sacrifice of national freedom of action, and must be counted as a significant cost.”

Consistent with the close relationship, Australia long ago agreed to host American or joint facilities on our soil, including at Pine Gap and Nurrungar. These facilities might have contributed to the strategic balance during the cold war, but in his significantly named book, Dangerous Allies (2014), former prime minister Malcolm Fraser expressed concern that new technologies now permitted Pine Gap’s capabilities “to be used in new and aggressive ways” — namely, to facilitate drone assassinations and targeted killings by pinpointing targets in real time.

As Fraser stressed, Australia’s longstanding insistence that everything Pine Gap does happens with our “full knowledge and concurrence” means we can be taken to approve of America’s use of drones to kill the citizens of friendly countries with which we are not at war. Pakistan — a fellow member of the Commonwealth and a country for which we budgeted $32.2 million in development assistance in 2019–20 — is a case in point. So are Yemen and Somalia.

Implicitly supporting Fraser’s critique were papers published in 2015 by strategic analyst Desmond Ball and his colleagues, which recounted in detail the militarisation of the personnel and administration at Pine Gap, and changes to its higher management structure. After more than two decades in which there were no serving US military personnel at Pine Gap, their numbers steadily increased after 1990 to the point where, by 2015, serving military personnel constituted two-thirds of US government employees, excluding contractors. In parallel with and reflecting this militarisation, the higher management of Pine Gap, always an American affair, passed in the early 1990s from the CIA’s Directorate of Science and Technology to the National Reconnaissance Office, and Pine Gap became more oriented to direct support of combat operations.

These changes, along with the evolution of technology and the changing geopolitical situation, suggest that Pine Gap has changed Australia’s political and military stance. We have gone from supporting the strategic balance during the cold war to collaborating, virtually automatically, in US wars of choice anywhere in the Pacific and Indian Ocean regions.

Malcolm Fraser was a staunch cold warrior in his day, and no bleeding heart leftie. When a former prime minister of his stamp (and with his insider knowledge) says that Pine Gap has been transformed into “a critical part of an offensive weapons system” and that “Australia should not be a part of it,” any Australian government should take heed. The prudent course would be to undertake a fundamental review of whether, to what extent and under what circumstances the facility continues to serve Australia’s national security interests. But this question is never asked.

Beyond the defence domain, government policy is at odds with an appropriately wide concept of how to manage national security in a threatening and rapidly changing world. Diplomacy is our frontline means of influencing world events, and hence means of defence: much better to manage our relationships so that we don’t come under threat than to park the ambulance at the bottom of the cliff to pick up the pieces when things don’t go as we hope.

For as long as I can remember, though, governments have seen the Australian diplomatic service and the department that supports it as a suitable targets for savings, to the point where a parliamentary subcommittee, citing a 2011 Lowy Institute report, could note in a 2012 report:

Australia has the smallest diplomatic network of all G20 nations, and only nine of the thirty-four OECD countries (all far smaller than Australia) have fewer diplomatic missions… The average number of posts for an OECD nation is 133. Australia has only ninety-five, and sits at twenty-fifth of thirty-four nations in the OECD league table of diplomatic representation — numbers which are wholly incompatible with Australia’s standing in the world.

We need to recognise that soft power — the ability to persuade rather than coerce — is an important part of our armoury. Accordingly, we need to strike a better balance between it and our hard (military) power by dramatically strengthening our diplomatic capabilities, including our representation in foreign capitals.

Other policies are at odds with the strategic picture painted by the government. The prime minister spoke of “Defence forming even deeper links and trust with regional armed forces and a further expansion in our defence, diplomacy, cooperation, and capability and capacity building.” Yet the government’s war on the universities, and on the humanities in particular, seems at odds with this approach. Where are we going to find the personnel with the deep linguistic capability and cultural understanding needed to engage with our complex region?

Similarly, the government’s war on science — exemplified again by its attacks on the universities, and by its savage cuts to research funding — is at odds with its high-tech goals for the ADF. This tendency plumbed the depths of absurdity when, in 2014, prime minister Tony Abbott both promised Defence increased funding and directed it to spend less on science.

I have long believed that the way we go to war — with the government alone making the decision, as the inheritor of the traditional powers of the monarch — is both an anachronism and an anomaly. In a modern state, with power supposedly flowing from the people to the government rather than the other way around, the decision to commit the ADF to armed international conflict should be made by our elected representatives in parliament. The uncertainties that lie ahead only serve to strengthen the case.

“We’re all in this together,” said Scott Morrison in the early days of the Covid-19 crisis. We are certainly all in it together when we go to war, and accordingly we, or at least our elected representatives on our behalf, should all have a say in when we go to war, alongside whom, and for what reason. •

Paul Barratt is a former Secretary of the Department of Defence and the Department of Primary Industries and Energy. He is now an Adjunct Professor in the School of the Humanities at the University of New England, and President of Australians for War Powers Reform. 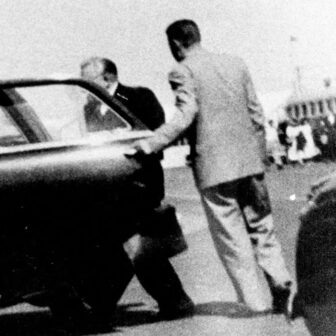