At Westminster, parliament will almost certainly vote down the British prime minister’s Brexit plan. No one knows what will happen next 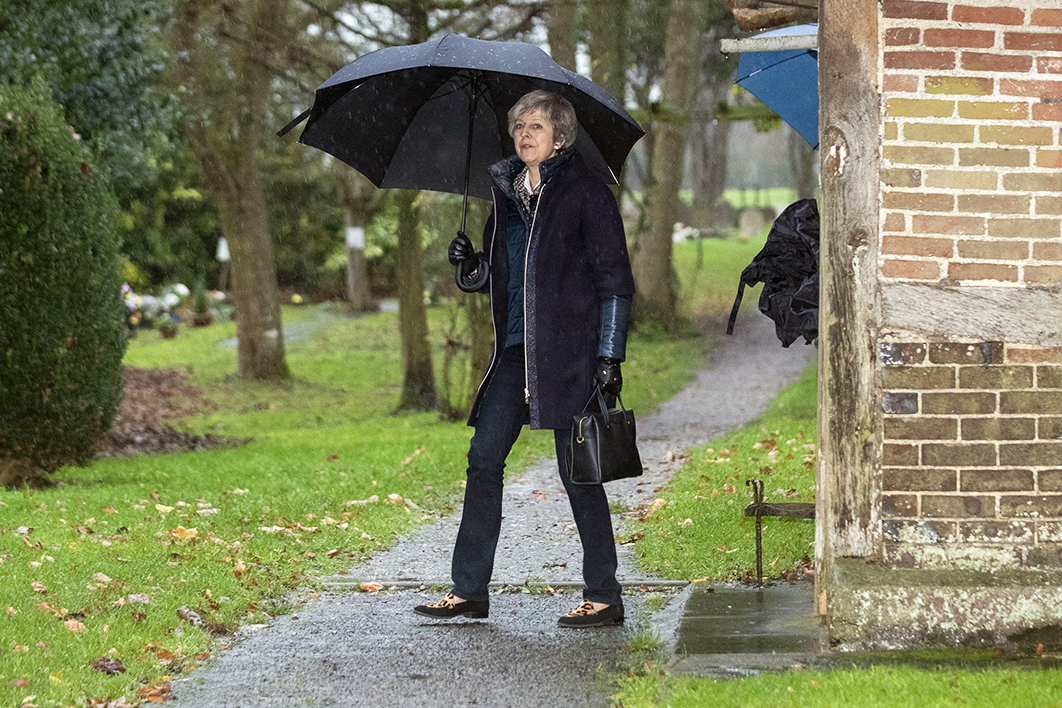 No popular options: prime minister Theresa May after attending a church service near her Maidenhead constituency yesterday. Steve Parsons/PA Wire

After this piece was published last night, the Brexit vote was postponed indefinitely

On the plane from Australia the BBC was live-streaming parliament. Suspended somewhere over the Indian Ocean between Tuesday and Wednesday last week, I watched Theresa May doggedly outlining how her deal with Brussels would sail the United Kingdom safely through the shoals of Brexit. The House of Commons was about halfway through the first of five scheduled days of debate, and earlier in the session the government had lost three votes, including one that found May and her ministers in contempt of parliament.

May had been on her feet for an hour but still only part way through her speech because she kept allowing questions from the floor and taking the time to answer them. She maintained an even temper, persistent but polite. Her questioners, if not always exhibiting such a calm demeanour, were also courteous, thanking the honourable prime minister for “giving way” to their interventions. Despite the importance of the topic and the proximity in which members are packed together in the historic chamber, the proceedings were far less vituperative than an ordinary question time in Canberra.

Nevertheless, the fissures running through British politics were immediately apparent. Discontent with the shape of the looming Brexit, or criticism of specific aspects of May’s agreement with the European Union, were voiced from behind and beside her, as well as from the benches opposite. While she also received some friendly questions from loyal supporters, the process appeared random and unpredictable, at least to an observer unfamiliar with the personalities of British politics. Where was the party discipline? Why weren’t MPs staying on message? This was democracy at work and it was messy.

Visiting rarely seen relatives in the following days, I quickly discovered that the Brexit faultlines reach out from Westminster and into lounge rooms. One cousin was all for leaving. Born soon after the end of the war, she hankered for a rejuvenated Commonwealth; restoring trading links with Australia, New Zealand and countries in Africa could, she thought, provide an economic and political alternative to Europe. Her mother, my aunt, has a picture of the Queen on her lounge room wall. Visiting England for the first time in his life, my twenty-year-old son was nonplussed. He sees Australia deeply entwined with Asia, and the Commonwealth as both meaningless and irrelevant.

Another English cousin is a staunch Remainer. He was worried about the economic impact of leaving the EU and warned that a hard Brexit — that is, a break with Europe without the type of agreements brokered by May — would lead to catastrophe.

Interestingly, both cousins agreed that former prime minister David Cameron should never have held a plebiscite in the first place. They shared the view that politicians in a parliamentary democracy are elected to make decisions on behalf of the people and shouldn’t squib hard choices by shifting responsibility back to voters. And yet, as Theresa May struggles to forge a way forward on Brexit, putting the issue back to the people in the form a second referendum has emerged as one possible future scenario.

The vote on the government’s Brexit deal is scheduled for Tuesday London time and parliament looks certain to knock it back. Some advisers are encouraging Theresa May to delay the vote to give the whips more time to secure support. But with more than a hundred members of her own side of politics thought to oppose the bill, that looks like a case of postponing the inevitable.

Yet Rawnsley believes that May is acting in the national interest by continuing with the vote. Britain is scheduled to leave the EU in just over three months, and “if Mrs May’s deal can’t be got through parliament, that needs to be established as rapidly as possible so that MPs can start trying to navigate towards a non-catastrophic resolution of this nightmare.”

What a “non-catastrophic resolution” might look like is unclear. Numerous options are being canvassed. One involves Theresa May resigning as prime minister. Having suffered a resounding defeat, she will say “I’ve tried my best, now it’s someone else’s turn to attempt to clean up the mess,” or words to that effect. This potentially opens the way for a Brexiteer like former foreign minister Boris Johnson to take office and for Britain to careen towards a “hard” Brexit, in which there are no specific post-EU arrangements in place to manage the cross-border movement of people and goods.

Some commentators see May clinging onto office – after all, who in their right mind would want the poisoned chalice at this moment — and then making a last-ditch dash to Brussels, waving the British parliament’s rejection of her deal in the faces of her Europeans counterparts and pushing them for further concessions.

Cabinet minister Amber Rudd is the latest of those who have suggested the fallback of a Norway-style option if parliament rejects the Brexit bill. This would see Britain remain a member of the single market (the European Economic Area) but not the EU. That has the economic benefit of maintaining the free movement of goods but the political disadvantage of maintaining the free movement of people, and May has made immigration control a “red line” issue in Brexit negotiations.

Another potential outcome is a vote of no-confidence in May’s government resulting in a general election. Since both parties are divided about the issue, it’s not clear that this would fix anything or merely prolong the uncertainty. Then there is the option of a second Brexit referendum, which might solve the problem by returning a Remain vote, but which would be likely to deepen the divisions and sharpen the resentments in British society.

The least likely option would be for May to build a government of national unity, and secure a parliamentary majority for keeping Britain in the EU. An opinion prepared for the European Court of Justice (in response to a case brought by Scottish politicians) argues that Britain can unilaterally revoke the Article 50 withdrawal process and call the whole Brexit thing off without the approval of other EU member states. Politicians would at last be stepping up to the plate of political responsibility, but a big chunk of voters would feel disenfranchised as a result.

The problem is that none of the available choices appears to enjoy a substantial level of support, either inside or outside of parliament. According to a poll on Britain’s Brexit options reported in the Evening Standard, 20 per cent of voters back a new referendum on whether or not Britain should stay in the EU, while roughly similar shares want Britain to leave without a deal in place, or want the government to try and extract further concessions from Brussels. Eleven per cent favour calling off Brexit unilaterally, 10 per cent want a general election and 10 per cent want a referendum to support or reject the deal that Theresa May has struck.

It’s a mess, and regardless of what path is eventually taken, it looks like a majority of voters will be dissatisfied with the outcome. •

Peter Mares is contributing editor of Inside Story, a senior moderator with the Cranlana Programme for ethical leadership and an adjunct fellow at the Swinburne Centre for Urban Transitions.