As Peter Costello’s fortunes show, politics can be a matter of being in the right place at the right time, writes Peter Brent 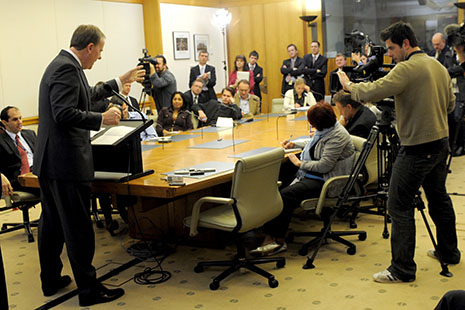 ECONOMICS was both a blessing and a curse for Peter Costello. Like all political successes, he was lucky. Along with his boss John Howard, Tony Blair and Gordon Brown in Britain, Canada’s Jean Chrétien and Helen Clark in New Zealand, Costello came to office when the world economy was hitting sustained overdrive. All these politicians were soon able to boast the best balance sheets and the lowest unemployment and interest rates in years, along with rocketing house prices – and they reaped dividends in longevity in office.

But it was these same economic conditions that kept Howard firmly in the prime ministership and Costello away from it.

It is likely that most parliamentarians arrive in Canberra with the desire – however sublimated – to be prime minister one day. The ambition is more realistic for some than others. As Malcolm Turnbull is finding out, brains and energy can get you into the running, but they are not enough; the final step is largely about timing and luck. Howard was unlucky to rise to the top of his party in 1985 when the federal Labor government was still young and in its stride, but he was very lucky a decade later to be waiting in the wings when Alexander Downer’s leadership collapsed. Kevin Rudd was lucky to peak at the time when an eleven year old government was vulnerable.

Peter Costello’s timing was pretty good. He was preselected for the safe federal seat of Higgins when Bob Hawke’s Labor government was on a downward trajectory, and he arrived in Canberra at the 1990 election, which saw the opposition receive a slightly higher share of the vote than the government but fewer seats. By the time of the surprise defeat of 1993 he was in the shadow cabinet, and he became deputy Liberal leader and treasurer in the Howard government from 1996. But that was where he peaked.

The unfairest criticism of Costello concerns his failure to challenge John Howard for the prime ministership during those eleven and a half years. The accusation is that he lacked the “ticker” to “wield the knife”; that he repeatedly “choked.” But Costello never remotely had the numbers for such an exercise, for the simple reason that until 2007 Howard had the appearance of electoral invulnerability.

This is where the comparison with the Hawke–Keating transition falters, because in 1991, when Paul Keating challenged once and then, successfully, a second time, Hawke’s government was quite evidently in deep trouble. If you think you’re headed for defeat, trying something different makes sense. While Howard appeared popular, the argument for a Costello prime ministership always hinged on entitlement – which was no argument at all.

It was only in 2007, after Rudd’s elevation saw opinion polls blow out, that it made sense for the Liberals to change leaders. So in this period the accusation can justifiably be levelled at Costello: why didn’t he challenge? One suspects a simple reason: by now he knew the government’s time was up. He therefore avoided becoming the Gordon Brown of Australian politics.

His behaviour since the election also reveals a realistic view of the ebb and flow of two party politics. He left the torment of early opposition leadership to Brendan Nelson and Turnbull. Each of them lurched from crisis to crisis: no wonder Peter looks happy.

Observers see it all as a game, but politics is emotionally scarring for participants. Does anyone doubt that Kim Beazley would be a happier man today if he had never been opposition leader? Or that Brendan Nelson will never quite regain the pre-December 2007 spring in his step? Costello, by contrast, ends public life as the country’s longest serving treasurer in wonderful economic times, not a failed opposition leader, nor a deputy who brought down his leader only to make a mess of things. He goes into his next career a happy man, the “best prime minister we never had.”

Most observers believe this week’s events give Turnbull breathing space. But leadership insecurity generates potential challengers (the most likely candidate being Joe Hockey) and Turnbull is still hostage to the opinion polls; recent improvements for the Coalition have not yet become mid-term doldrums for the government, so his chances of surviving to the next election, let alone winning it, are still poor. The timing of Turnbull’s elevation to the leadership was awful, and there is a good chance he too will bow out of politics at the next election.

There is also the question: is this really the end of Costello? In the 1980s the Liberals’ search for a messiah involved several non-parliamentary candidates. Does his decision not to recontest really rule him out of the leadership? Preselections can be overturned, and party-room fantasies indulged in.

Perhaps only a by-election in Higgins will put the issue beyond doubt. •