Decision-making among the Chinese elite is as hard to read as it’s ever been, and the uncertainty extends to the character of the president himself 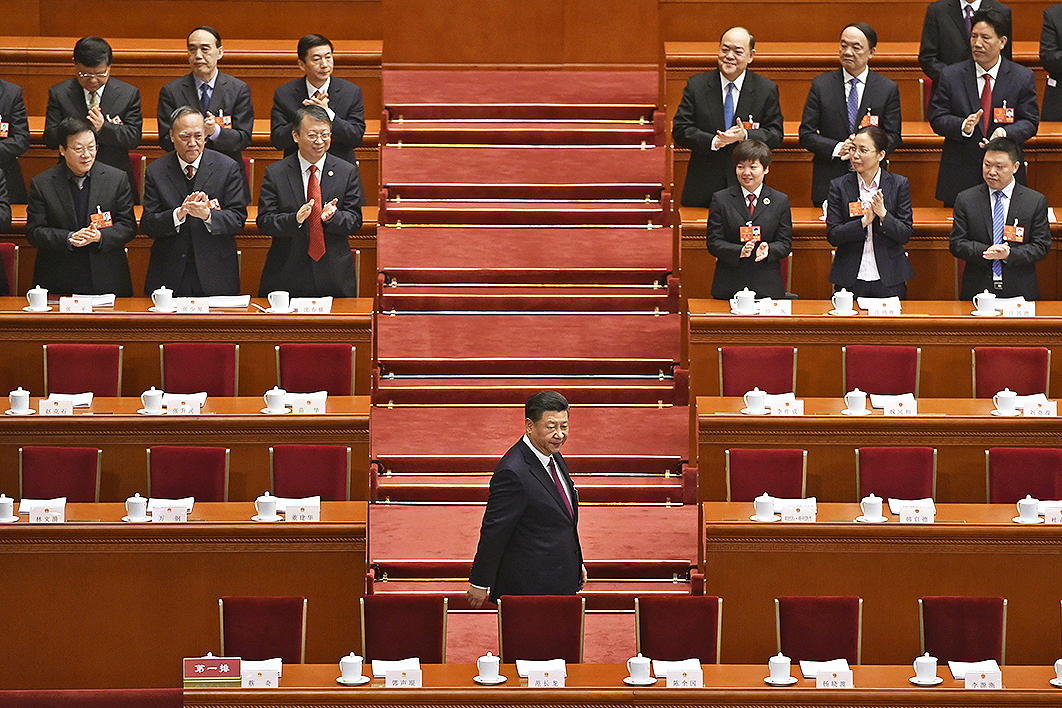 In the market for reassurance? Chinese president Xi Jinping (centre) at the annual session of the National People’s Congress at the Great Hall of the People in Beijing on Monday. Kyodo/AP

In politics, we are always trying to penetrate the outer layer and gain some insight into what’s going on inside the machine. Sometimes, systems leak and give us plenty to go on with: Bob Hawke and Paul Keating’s epic bust-up in Australia three decades ago, for instance, laid open the entrails of government, and the endless and eventually very open animosity between Tony Blair and Gordon Brown cast light on how Britain is governed. Today, the Trump White House dispenses so many revelations that a journalist can produce a book like The Fire and the Fury with enough credibility for the president to threaten to silence it by libel action. Needless to say, the threat only gave the book more credibility and lifted its sale figures so much that the author issued a public thank you to the would-be litigant.

Compared to Washington today, the Chinese political world under Mao Zedong was almost like an imperial court, closed off from the outside world. Yet stories constantly circulated about who was going up and who was going down, and the gossip percolated through to Hong Kong and from there to the wider world. The breaches were especially remarkable given the lack of sophisticated communication technology and any direct access to the country.

Later, our understanding of what happened in Tiananmen Square in 1989 was deepened by our eventual access to the leaked records of meetings in which members of the elite discussed how to handle the unrest. Since then, there have been moments of sporadic revelation about what happens in the inner corridors of Zhongnanhai, the Beijing precinct in which China’s leaders work and live. But the crumbs of information falling from the table over the past few years have come to be few and far between.

Under Xi Jinping, the tightly locked black box at the heart of the Chinese political system has never been more secure. Our only information about interpersonal relations at the centre comes when we are told who has been removed in the post-2013 anti-corruption struggle, or when the party announces moves that appear to be bolstering Xi’s power. Otherwise, on the surface at least, a placid immobility reigns. Even when we watch closely, we don’t see any clues until things finally happen. We are always dealing with effects, and never seeming to catch hold of causes.

This month’s constitutional change, which removes time limits for the presidency and potentially makes incumbency perpetual, is interesting for three reasons. First, on the surface at least, it is largely unnecessary. Xi doesn’t need power and recognition beyond the posts and titles he already has. The presidency has largely been a ceremonial role, albeit one that has been occupied since the 1990s by the same person who happens to be party secretary, where the real power lies. Why arouse attention, and expend political capital, on something that seems to offer little real reward? Surely this says something deeply meaningful about who he is and how he is using his powers?

This links to the second issue: who initiated this proposal? In the vast bureaucratic machine that is the modern Chinese party state, the power to initiate ideas is a significant one — for which Xi presumably occupies pole position. The idea presumably emanated from him, or from the people around him who serve his interests. If it came from Xi himself, then it shows an almost limitless hunger for formal titles and the accruing of yet more political capital. Does that indicate a neediness about Xi — a sense of always searching for a level of validation to satiate ambition that can never be satisfied? If it came from his advisers, have they seen close up a figure forever in the market for flattery and reassurance? Either way, it is not reassuring. His desires will start to focus, even more forcefully, on a world he now sees as waiting, with open arms, for his conquests. And China now has the hard-power assets to act on this sort of ambition.

Third, how can we outsiders interpret this move? Since the time of Hu Jintao, president from 2003 to 2013, Chinese politics has increasingly become like a game in which the main player (the party-state elite in Beijing) almost delights in swift, unexpected and seemingly arbitrary moves designed to confuse. No government on the planet uses this sort of obfuscating tactic better. Everyone is trying to work out what the constitutional changes mean. No one seems quite certain. But the most striking result is widespread confusion and ambiguity.

Of the interpretations we might want to consider, there are two broad possibilities. The first is that even if Xi is so ambitious and has become so emboldened that he feels as if anything is possible, it might turn out to be a big miscalculation. We like to attribute a high sense of deliberation and strategic calculation to Chinese political decision-making. But maybe this is an ill-advised move by an increasingly isolated leadership that has suppressed all hints of constructive criticism and dissent to the point that no one dares point out a bad idea when it comes along. The Chinese political system is not inherently wise and immune to mistakes. Look at the colossal catastrophes in the 1950s and 1960s. Mao might have been a fiendishly clever and skilled manipulator, but we remember most vividly the human misery and calamity his decisions led to.

Already, there are signs of disagreement and dissatisfaction about the possibility of a limitless Xi leadership period. And if economic or other problems strike, Xi’s dominance could become a liability rather than an asset.

The second interpretation is a more benign one: that Xi, as servant of the party in its mission to make one-party rule sustainable, is simply creating new strategic space, but not in the areas, or the ways, we might think. A new party secretary might be elevated in 2022. Since the 1980s, the unwritten rule of the party limits tenure in this position to two terms, and the party’s unwritten rules are much stronger than the state’s codified ones. In this situation, Xi would be able to stay on as president and let someone else lead the party. He would still have power — as Deng Xiaoping did in an earlier time, despite holding no formal positions. Xi would be the paramount leader, but the party as an institution would continue following its rules.

At the moment, we can only speculate. Observing Chinese politics has become a reactive activity. Of one thing we can be certain: under Xi, we must expect the unexpected. Beyond that, we simply have to wait for things to happen, and then quickly try to work out what interpretative pattern they fit. And for all the excited talk of Xi the emerging dictator, it is still too early to make confident predictions, for the simple reason that the Communist Party is such a vast and complex entity, and the idea that one man can simply corral it to his purposes seems, however attractive, simply too… well, simple. •