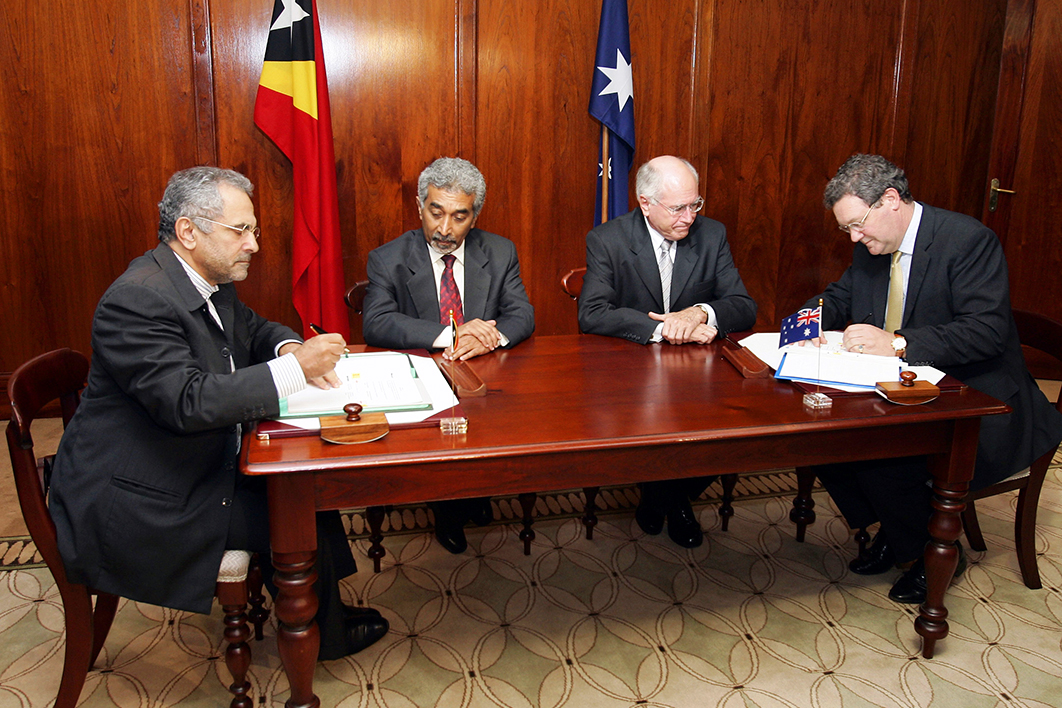 With the release of his book detailing the sorry saga of Australia’s negotiations with less well-equipped neighbours over oil in the Timor Sea, Canberra lawyer Bernard Collaery has dramatically raised the stakes in his impending trial for breaching secrecy laws.

Oil Under Troubled Water, published this month by Melbourne University Press, is a trenchant and deeply researched account of those negotiations. It shows how the Australian government and its lawyers unscrupulously misrepresented petroleum discoveries in the seabed and used high-pressure tactics to push the cash-strapped UN administration and then the new Timor-Leste government into premature and disadvantageous agreements. And it recounts Australia’s March 2002 decision to withdraw from the jurisdiction of international courts on questions of maritime boundaries, a move that continues to jar with Canberra’s admonitions about a “rules-based international order.”

The bombshell in this book is that the Australian government, with the Coalition in power at the critical times, neglected to include in production-sharing contracts any mention of the helium component of the gas flow from discoveries in the area of joint exploitation. The price of this inert lighter-than-air gas — a critical component in high-tech processes including magnetic resonance imaging and liquid crystal displays — has shot up in recent years.

Helium is mostly recovered from flows of natural gas, and the Bayu-Undan field in the Timor Sea had more than enough to justify extraction. ConocoPhillips, the operators of that field, got it for free, and sent it via pipeline to a liquified natural gas plant in Darwin. The US oil major then sold the helium fraction to BOC Australia, owned by the multinational industrial gases group Linde, which opened a plant next door to the Darwin LNG terminal in 2010.

By 2015, according to Collaery, the annual output of the plant, which cost perhaps $50 million to build, was an estimated 200 million standard cubic feet. At prevailing prices, that’s $2 billion in revenue per year. When I enquired, BOC Australia refused to comment on these claims, saying it cannot reveal confidential information about agreements with suppliers or customers.

As Collaery’s account stands, both the Australian and Timor-Leste governments have neglected to obtain any revenue benefits for their people from a resource whose value seems to be greater than the petroleum gas in which it has been hidden. The same will go for the much larger Greater Sunrise field unless its production-sharing agreement with the Woodside Petroleum consortium is modified.

Timor-Leste’s negotiators, initially led by then prime minister Mari Alkatiri, were advised by a Norwegian expert to add the words “and inerts” to the Bayu-Undan and Greater Sunrise contracts, but did not pursue the point. They were bound by a statement — signed by Alkatiri, Xanana Gusmão and José Ramos-Horta — that the holders of contracts signed under the Indonesian–Australian regime would continue to enjoy the same rights under an independent Timor-Leste on terms that were “no more onerous.”

The statement was drafted and signed in September 1999 at a meeting in Darwin with officials from the Department of Foreign Affairs and Trade and Phillips Petroleum, later ConocoPhillips. Australian-led peacekeepers had barely begun securing East Timor from the rampaging of departing Indonesian troops and militias, and the Timorese had no legal advisers with them.

Collaery’s book will upset many of Timor-Leste’s friends. It is bitterly critical of Alkatiri and other Fretilin leaders, whom Collaery accuses of adhering to undemocratic doctrines and Leninist organisation and rushing to sign unfavourable agreements to secure revenue flows. He is comparatively soft on Gusmão, whom he has advised for twenty years.

Most of all, though, he paints an invidious picture of Alexander Downer, who was foreign minister for all the period from Timor’s move towards independence to the ratification of treaties in 2006 deferring any redrafting of the maritime border for thirty years and giving Australia half the revenue from Greater Sunrise. Downer was in thrall to Woodside Petroleum, Collaery believes, and came to identify its commercial interest with the national interest.

Warned about further prosecution and a possible ten-year jail term under post-9/11 intelligence laws, Collaery studiously avoids the matter that has him facing trial in the ACT Supreme Court: the Australian Secret Intelligence Service’s bugging of Timor-Leste’s cabinet room at the height of the maritime treaty negotiations in 2004.

Collaery is charged with conspiracy to communicate secret intelligence information to the government of Timor-Leste between May 2008 and May 2013, and with sharing some of this information with ABC journalists. One of the ASIS operatives involved in the Dili bugging, known to the public only as Witness K, is charged with breaching the Intelligence Services Act by discussing the operation with Collaery, even though he had been cleared to take his misgivings about the operation to Collaery as a legal adviser.

Collaery, deputy chief minister and attorney-general in the ACT government between 1989 and 1991, has spooky elements in his own early background. His book mentions training in commando-type operations while at university, an activity ASIS pursued with trusty potential recruits at least until the bungled “hostage rescue” at Melbourne’s Sheraton Hotel in 1983. He also worked for a little-known security section of the immigration department, and was a first secretary of the Australian embassy in Paris. This and his later political experience seem to have gained him the security clearances that led Witness K to his office.

Whether or not it was Collaery who told them, the Timorese informed then prime minister Julia Gillard in December 2012 that they knew of the 2004 bugging operation and were intending to use it as evidence of bad faith in negotiations to annul the treaties reached with Downer.

Not long after, the Australian Security Intelligence Organisation (then led by the ASIS chief at the time of the Dili operation, David Irvine) raided Collaery’s office and seized material. Later, the government withdrew Witness K’s passport to prevent him from testifying at the proceedings Timor-Leste had launched at the International Court of Justice in The Hague. After years of manoeuvres ended with Timor-Leste’s decision to withdraw its bad-faith case (to Collaery’s great disappointment), Canberra agreed to mediation supervised from The Hague. The result was a vastly more favourable carve-up of Great Sunrise for the Timorese.

While Canberra’s lawyers were fighting the bad-faith accusation in the International Court of Justice it would have been counterproductive to prosecute Collaery and Witness K for leaking about the ASIS operation. The threat of international condemnation removed, attorney-general Christian Porter authorised the director of public prosecutions to go ahead with charges against both.

In a hearing scheduled for mid April, Witness K is ready to plead guilty, apparently in return for not having a conviction recorded and being free again to travel. Collaery’s case will go to a jury trial, possibly in May if Covid-19 does not disrupt court schedules. But a preliminary hearing will test Porter’s invocation of the 2004 National Security Information Act, which allows intelligence material to be revealed only in closed court. So far, it seems, even Collaery’s own defence counsel have not been allowed to see the evidence being brought against him.

Affidavits have been given to the court by former foreign minister Gareth Evans and former defence forces chief Chris Barrie. According to Justice David Mossop, both men challenge Porter’s assertion that the evidence, if disclosed, would threaten national security. Both Gusmão and Ramos-Horta are ready to testify as defence witnesses.

Whether or not Collaery’s lawyers manage to have the trial held in the open with Downer and officials cross-examined, this book has given the case a wider moral setting that will greatly influence the court of public opinion. If they manage to have it introduced as evidence, it might well sway the jury.

The Dili operation taints not just the diplomatic and intelligence figures involved, but also the entire government of the time. Could Downer and his department head, Ashton Calvert, have authorised the bugging without seeking approval from cabinet’s national security committee, whose other members would have been prime minister John Howard, deputy prime minister John Anderson, treasurer Peter Costello, attorney-general Philip Ruddock and immigration minister Amanda Vanstone?

Why, one wonders, has Porter chosen to pick at this scab? The fact the prosecutions were launched confirms the ASIS bugging happened. With its 2015 decision to return to international jurisdiction, the Labor Party ended the shameful bipartisan effort to rob the Indonesians and Timorese. Porter is inviting a royal commission by a future government. •

Hamish McDonald is a former foreign editor and China correspondent of the Sydney Morning Herald and former regional editor of the Far Eastern Economic Review.

The age of the news agency needn’t be over

Vital reasons for the rise of Reuters, Australian Associated Press and other agencies haven’t gone away 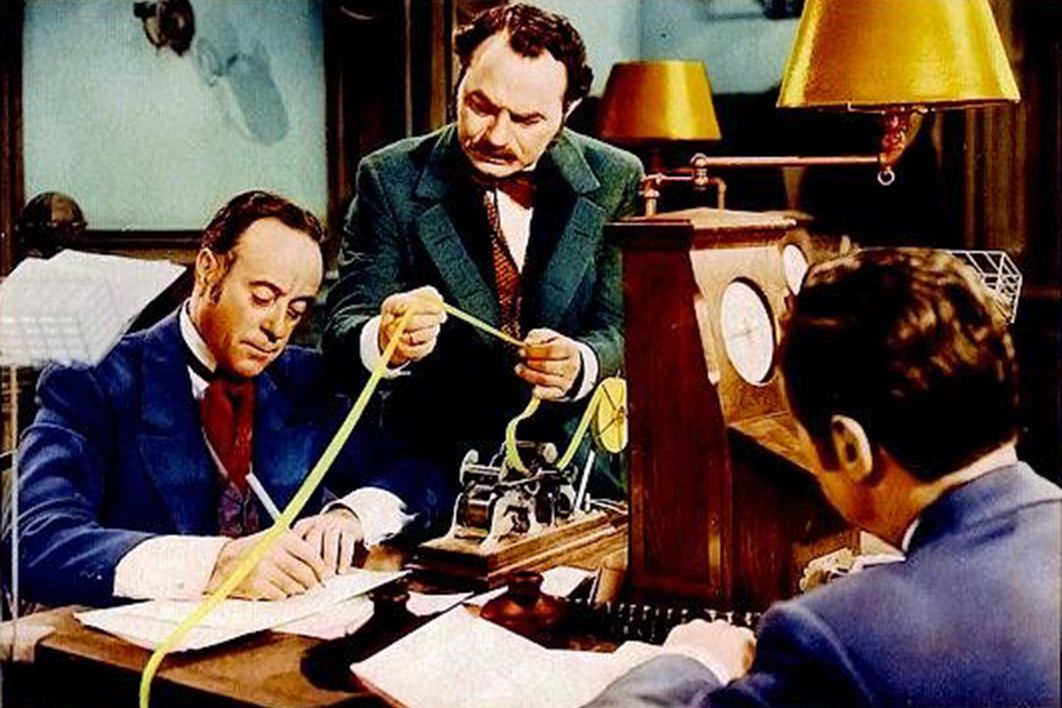