The China–Australia Free Trade Agreement will make less difference to the Australian workforce than its critics imagine, argues Henry Sherrell 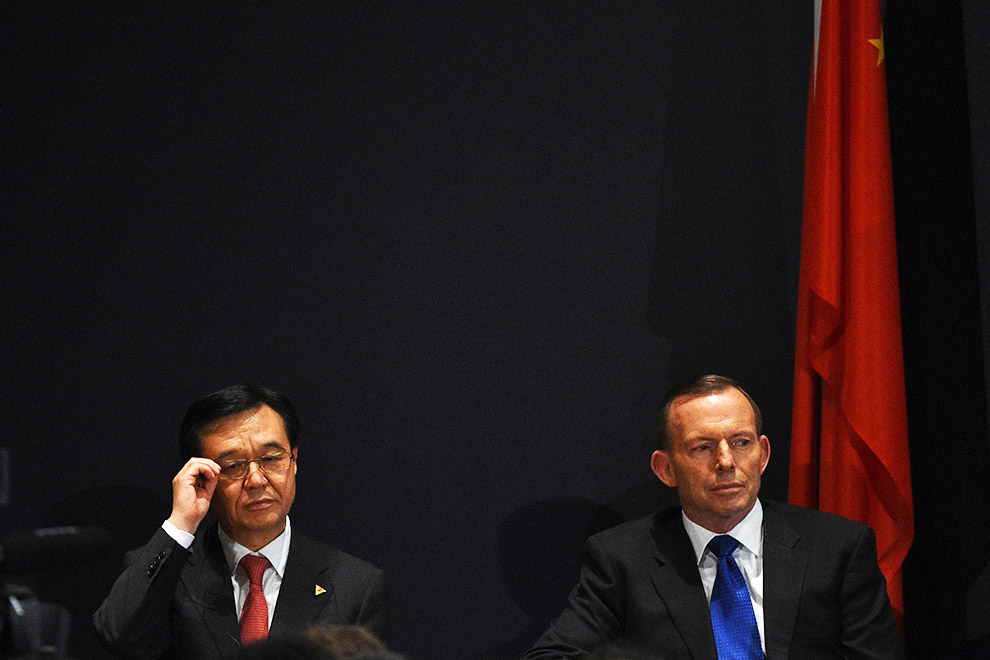 A central question has been missing from the avalanche of think pieces, fact checks and hot takes about the China–Australia Free Trade Agreement, or ChAFTA. How is the agreement likely to change the make-up of the Australian labour force? This is my best attempt to answer this question by looking at the three contentious elements of the deal.

First up, chapter 10 of the agreement will abolish labour market testing for Chinese citizens under the 457 temporary visa program. In other words, Australian employers won’t be required to try to fill the job locally before they bring in a Chinese worker.

Figures from the immigration department reveal that 6207 people were granted Skill Level 3 visas from July 2014 to March 2015, out of a total of 38,134 visas in the 457 program. On these figures, 84 per cent of the program isn’t subject to the requirement to advertise jobs.

Between June 2014 and March this year, 2569 primary 457 visas were granted to Chinese citizens. Of these, 269 were classified as Skill Level 3 and were subject to labour market testing. ChAFTA will remove this requirement. Those visas make up 0.7 per cent of the 457 visa program from July 2014 to March 2015. It may be the case that removing the requirement for labour market testing will induce more migration, but this seems unlikely: wages and economic growth have traditionally been a much greater influence on 457 visa trends.

Based on current trends, my best guess is that, at most, an additional 1 per cent of the 457 visa program will be exempt from labour market testing if the ChAFTA passes.

The agreement also means Australia can’t cap the number of standard 457 visas granted to Chinese citizens. This is exactly how the rules operate already; the entire 457 visa program is uncapped and has been since its inception in 1996. This clause is found in many existing free-trade agreements struck by Australia. The highest number of 457 visas granted to Chinese citizens in any financial year was 3727 in 2012–13, or 5.4 per cent of visas that year.

The second change that would result from the passing of the ChAFTA is the removal of the requirement for Chinese citizens to undergo a mandatory skills assessment exam to certify they have the skills relevant for the nominated occupation. These exams are currently only required for citizens from Brazil, China, Fiji, India, Papua New Guinea, Philippines, South Africa, Thailand, Vietnam and Zimbabwe, and the visa applicant must be nominated in one of the following 28 occupations:

The ChAFTA will remove the mandatory skills assessment for ten of these occupations (those starred above). The total number of Chinese visa holders nominated for these ten occupations from July 2014 to March 2015? Fifteen.

Importantly, though, a total of 1184 visas have been granted for these ten occupations for the program as a whole. This means over 70 per cent of 457 visas granted in these occupations are not subject to mandatory skills assessments. If we retroactively apply the ChAFTA to 2014–15, a total of fifteen Chinese citizens would have joined them.

Finally, the ChAFTA includes the option of Investor Facilitation Agreements, or IFAs, a framework to facilitate individual contracts between employers and governments outside of the standard 457 visa program.

Contracts like these already exist. The immigration minister has broad powers under the Migration Act to approve migration contracts with any employer in the country regardless of industry or investment origin. These have generally taken between six and twelve months of negotiation.

The two main purposes of the contracts are to lower the English language requirement slightly for visa holders and to allow the sponsorship of Skill Level 4 occupations, the lower-skilled occupations not allowed under the standard 457 visa program. These contracts typically cover regional and rural areas where attracting labour is more difficult, and the value of the project must exceed $2 billion.

Unfortunately, as a consequence of the immigration department’s longstanding transparency problem, I haven’t been able to ascertain the number of labour agreements currently in operation. But at a Senate Estimates hearing in February 2014, the department divulged that fifty-one had been signed in the previous six months.

Including IFAs in ChAFTA appears to be an attempt to reduce approval times for these agreements. So how many new migrants would we expect to see come to Australia through this process?

The Roy Hill mining project is a good historical example of this type of contract in action. The Roy Hill Enterprise Migration Agreement covered 1715 positions for a $9.5 billion project with a total workforce of 8000.

At $150 million, the threshold to enter into an IFA is much lower. Using the same ratio as Roy Hill, a construction project with 150 workers worth $150 million may see about thirty positions covered by an IFA. Applications for these contracts will require detailed estimates of workforce and local training. A majority of these workforces will be drawn from people already in Australia, and negotiations will clearly stipulate the number and type of occupations. The contracts will attract serious attention in Senate Estimates, creating pressure to ensure any agreement is limited in its scope.

I estimate between ten and fifteen of these agreements will be signed in the twelve months after the ChAFTA is finalised. The government will want to show that the process works and won’t want it to be subject to ongoing controversy. If the fifty agreements signed between September 2013 and February 2014 continue to represent the trend, then those ten to fifteen Chinese IFAs would be around 10–15 per cent of the total number of agreements signed.

If an average of thirty migrants per contract is in the ballpark, this will see between 300 and 450 workers extra entrants to Australia, equal to about 0.8 per cent of the expected total number of 457 visa grants for that period.

There are substantial unknowns here, and these unknowns are driving the campaign against the ChAFTA. If demand for IFAs exceeds what is expected, for example, this will signal that the threshold investment level is too low. If the number of workers per contract is significantly higher than existing contracts, this will also signal something is amiss.

The only radical change in the ChAFTA is the side letter on the working holiday program. Australia will provide 5000 places to young Chinese citizens to work and holiday in Australia. Given that a total of 239,000 visas were granted to working holiday-makers in 2013–14, this is a relatively small number.

But among Australia’s thirty-plus bilateral agreements governing working-holiday visas, this is the first to my knowledge that doesn’t give Australians reciprocal rights. While a small number of Chinese citizens will be able to work and holiday in Australia, no Australians will be able to use similar visas in China. The working holiday program should be about cultural connections and building links in a global world; ChAFTA sets a worrying precedent.

A strong campaign is being waged against the ChAFTA. Rather than being xenophobic or racist, it appears to reflect self-interest or confusion over the complexity of the proposed migration regulations, or both. The result is a widespread perception that millions of work-ready Chinese people are waiting to jump on flights to Sydney. Nothing could be further from the truth. The vast majority of changes outlined in the agreement are standard policy proposals associated with free-trade agreements or a continuation of existing policy. •

Henry Sherrell is a policy analyst for the Migration Council Australia and worked for the Department of Immigration and Citizenship from 2008 to 2012. These are his personal views and not those of his employer. An earlier version of this article appeared on his website Value for Money.

National Affairs Has the government given up on markets? Adam Triggs 22 June 2020 Changes to university fees are just the latest example of successive governments preferring to pick winners than trust markets
Close

By-elections sometimes reflect important political trends, and sometimes they don’t, writes Peter Brent. So why are we watching Canning so closely?

Potential backfire? Mobile ads funded by the CFMEU for the union campaign against the Coalition in Canning. Rebecca Le Ma/AAP Image 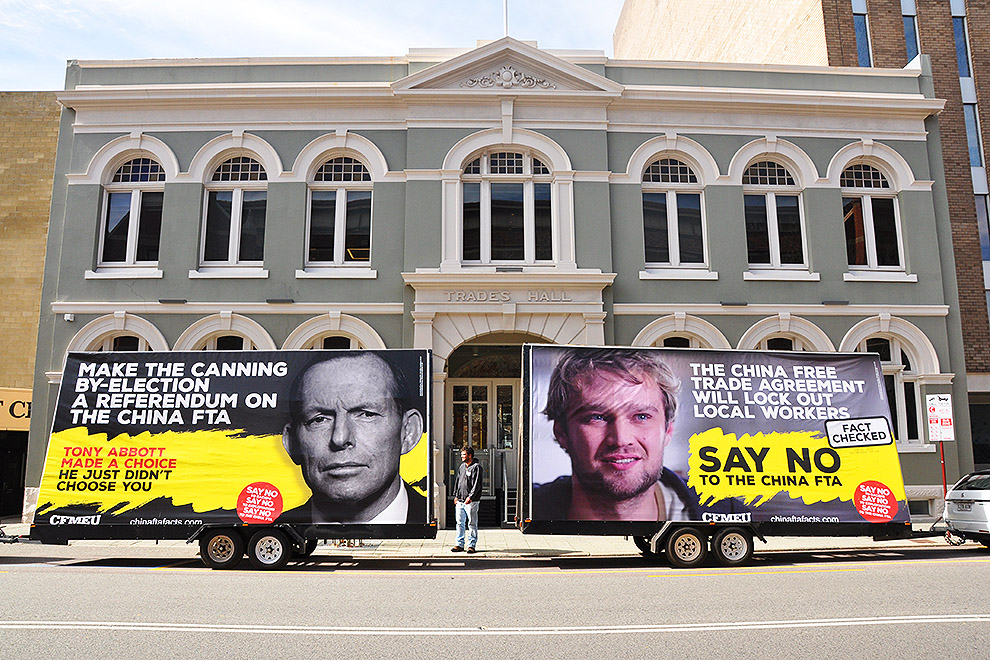 Potential backfire? Mobile ads funded by the CFMEU for the union campaign against the Coalition in Canning. Rebecca Le Ma/AAP Image