Billy Hughes and the end of an Empire 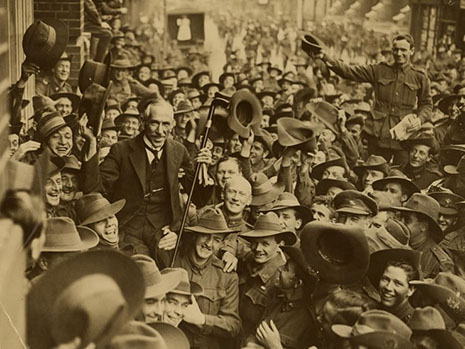 TWO months after the guns fell silent on 11 November 1918, the victors in the “war to end all wars” assembled in Paris to create a new world order. As it turned out, the treaty they devised was to set the stage for the conflicts of the next century and beyond, up to today’s democratic rebellions in the Middle East and North Africa. A good reason, then, for Haus Publishing to commission a series of short biographies of these allies-turned-“peacemakers,” from the Big Three, Woodrow Wilson, Lloyd George and Georges Clemenceau, to the leaders of such far-flung states as Japan, Canada, South Africa and Australia.

Carl Bridge, director of the Menzies Centre for Australian Studies at Kings College London, is the author of the volume dealing with William Hughes (better known as W.M. Hughes or William Morris Hughes or Billy Hughes), the diminutive Welsh–Australian prime minister who battled on behalf of Australia’s interests at the Peace Conference, and who returned from Paris having achieved, on paper at least, most of the war aims he had been proclaiming since its outbreak. To do so, Hughes defied the architect of the “new world order,” the American president Woodrow Wilson, helped guarantee that Germany would be held responsible for the full costs of the war, doomed the “racial equality” clause in the Peace Treaty, scuttled Japanese ambitions in the South Pacific, and helped to give a new lease of life to the British Empire as an imperial trading and defence bloc. Carl Bridge describes the Peace Conference as Hughes’s “finest hour,” dismissing, as did Hughes, “the short-term opprobrium of the right-thinking liberal internationalists.”

Nearly a century on, Hughes is fondly remembered by some in Australia for chastening Wilson at the Peace Conference with the declaration, “I speak for 60,000 dead,” but despised by others as the “rat” who in 1916 walked out on the Labor Party over conscription, taking with him enough MPs to form a new party that, in coalition with Conservatives, was able to govern as Nationalists. How to explain his political misjudgement when he was then humiliated twice in conscription referendums? Even the soldiers on the Western front, who cheered him as “the Little Digger,” voted against conscription. Carl Bridge’s chapter “Conscription” sets this debacle in the context of Hughes’s career as a “visceral imperialist,” though he might have made more of his determination to meet the expectations of fellow-Welshman Lloyd George, whom Hughes had helped to win public support for conscription in Britain.

Arriving in Britain in March 1916, when national morale was low, Hughes was immediately coopted by munitions minister Lloyd George and newspaper magnate Lord Northcliffe (at the instigation of the Australian journalist Keith Murdoch) to set off on a “Wake Up England!” speaking tour. In a succession of electrifying speeches urging Britain to crush Germany, renounce free trade and establish economic union with the Empire, Hughes galvanised the British public, winning such popular support (50,000 women signed a petition begging him to stay and stand for parliament), and such powerful backing from businessmen and manufacturers, that he was offered a senior Cabinet post and even touted as the next prime minister. Instead, Hughes returned to Australia to do battle over conscription, while Lloyd George, capitalising on the new national mood, forced the vacillating prime minister, H.H. Asquith, to resign, and took on the mantle of war leader.

Back in Britain at the end of the war, Hughes once again stumped the country, this time attacking the terms of the Armistice devised by Woodrow Wilson, especially the clause that declared Germany should pay reparations only, and not an additional “indemnity” to the victors. He also attacked the president’s vision of the League of Nations and international free trade, urging — as ever — preferential trade policies that would block Germany’s economic recovery and strengthen the Empire. With the Northcliffe papers as his megaphone, Hughes again became such a popular demagogue that Lloyd George, on the eve a general election, appointed him chairman of the hastily formed Indemnity Committee. Guided by Hughes, and ignoring the advice of Treasury official John Maynard Keynes, the committee reported that Germany should pay the total costs of the war to the Allies: £24,000,000,000, a grotesque amount that Lloyd George announced in his last speech of the election campaign, less than a month before the Paris Peace Conference. He won the election in a landslide.

Carl Bridge’s portrait of Hughes is true to the man, though he has fallen into the trap of repeating what has to be scuttlebutt, from Churchill’s The World Crisis: The Aftermath (1929). At a Peace Conference meeting attended by the Dominion prime ministers, Clemenceau, according to Churchill, said, “ ‘Mr ’ughes. I have ’eard that in early life you were a cannibal,” to which Churchill has Hughes reply (by quoting Mark Twain), “That has been greatly exaggerated.” Yet Bridge has already told us that in October 1918 Hughes conferred with Clemenceau and other members of the French cabinet when he was in Paris to receive the Grand Cross of the Legion d’Honneur, in recognition of Hughes’s efforts ever since the 1916 Paris Economic Conference to enforce crushing economic restrictions on postwar Germany.

Churchill’s story is a reminder that Hughes has always been something of a joke, as in David Low’s best-selling book of cartoons, The Billy Book, from which Bridge includes a drawing of Hughes throwing a tantrum at a war cabinet meeting. Hughes’s physical likeness to Charlie Chaplin, the noisy contraption he used as a hearing aid, his larrikinism (his habit of saving half-smoked cigarettes behind his ear was noted at Versailles), his witty repartee, all tend to overshadow his formidable achievements as a founder of the Labor movement, as wartime prime minister, as a rousing war-leader in Britain, and as one of the victors at the Peace Conference.

Hughes’s imperial patriotism was visceral, but, as Bridge shows, it was also far-sighted and pragmatic. As a national politician, Hughes was always intent upon securing Australia, a dominion of the British Empire in its heyday, against the ambitions of both Germany and Japan; he saw the White Australia policy as integral to this imperial vision. Before the war, as deputy leader and attorney-general in the federal government, he introduced compulsory military training and bought a small fleet of warships and a submarine to establish the Australian Navy as an arm of the British Navy; after war was declared, he introduced sweeping laws to stop all trade and transactions with German companies, or indeed with anyone with a German name. In Britain in 1916, Hughes managed to buy up a fleet of merchant ships to carry Australian wheat, wool, meat and minerals to Britain: the Commonwealth Shipping Line. At the Paris Peace Conference, he fought tooth and nail to get Australia control over German New Guinea and Nauru, the formerly German phosphate island; in the end Hughes had to be satisfied with “Mandates,” just as he had to accept that Australia would be lucky to get anything at all as its share of the German indemnity.

Hughes’s extremism on war costs, his campaign against the Fourteen Points and the League of Nations, his influence on the British public and Lloyd George during the British General Election, have to be seen as factors in the Peace Conference. Bridge’s lively chapter on the cut and thrust of Hughes’s battles at the Peace Conference goes a long way to explaining Hughes’s polarising effect upon people. (His determination to win German New Guinea for Australia had Woodrow Wilson describe him as a “pestiferous varmint.”) But it was the vengeful and opportunistic horse-trading of the major powers that put paid to Woodrow Wilson’s woolly idealism and to the aspirations of the multitude of ethnic and colonial leaders who had come to Paris seeking the self-determination promised by the Fourteen Points.

At the meetings of the Big Three, Wilson, Clemenceau and Lloyd George, the British treasury official John Maynard Keynes watched, appalled, as Lloyd George “bamboozled” the president, while Clemenceau refused to consider anything less than a “Carthaginian peace” that would permanently crush Germany. In June 1919, Keynes resigned and returned to England to write an indictment of the treaty and of the “peacemakers” responsible for it. In Keynes’s view, postwar Europe was in a state of emergency: the Germans were starving and needed food; Europe’s recovery, European civilisation, depended on German economic recovery. Instead of fighting over the spoils, the Allies should have dealt with reparations (to Belgium and France), then turned their attention to “the economic rehabilitation of Europe.”

Published in December 1919, The Economic Consequences of the Peace was an immediate bestseller; translations in nine languages followed. When Hitler came to power, some saw Keynes as prescient. Still in print, Keynes’s popular work has fallen out of favour with historians such as Hew Strachan, author of The First World War (2003), who writes that the only failure of the peace settlement “was the Allies’ failure of resolve in implementing its terms.” Carl Bridge does not refer to it. Margaret Macmillan, author of Peacemakers (2001), dismisses it as an act of atonement for Keynes’s pacifist Bloomsbury friends.

Nevertheless, Europe was fortunate that at the end of the second world war, President Harry Truman entrusted to his secretary of state, General George Marshall, the magnanimous “European Recovery Program.” Marshall knew Keynes’s works and his economic theories, and was determined not to repeat the mistakes of the first world war. “Our policy,” he wrote, “is directed not against any country or doctrine but against hunger, poverty, desperation and chaos… Any government that is willing to assist in the task of recovery will find full cooperation, I am sure, on the part of the United States government.”

Between 1948 and 1951, the United States provided around $14 billion to Western European countries (the Soviet Union and its satellites refused aid) to reconstruct infrastructure, regenerate heavy industry, and revive European commerce. The Marshall Plan produced the “German economic miracle,” thirty years of peaceful European economic growth, and laid the foundation of what is today the European Union.

The second world war ended Australia’s trust in the British Empire for its defence and its economic security. It also spelled the end of the Empire itself.

Well researched and annotated, with a useful chronology setting Hughes’s life in its historical context, Carl Bridge’s 130-page octavo-size hardback biography of Billy Hughes is a lively portrait of, arguably, the most formidable, most amusing, most Australian of our prime ministers. •