Boats and votes: more evidence on the opinion gap

People might have strong feelings about asylum seekers, but there’s no sign in the latest polls that harsher measures are a vote winner, writes Peter Browne 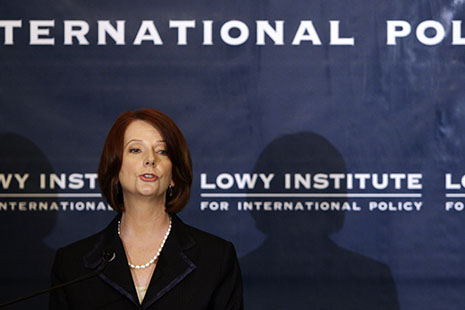 SIX WEEKS AGO Tony Abbott announced that the Coalition will revive the Pacific Solution and reintroduce temporary protection visas if it wins this year’s federal election. His plan dramatically sharpened the differences between the government and opposition on an issue that most commentators believe to be among the top worries in the minds of many voters. Now there could be no mistake: the federal Coalition was in favour of tough measures against boat people; Labor was equivocating.

Over the next couple of weeks Mr Abbott and his advisers no doubt turned eagerly to the polls for confirmation that the tactic had worked. The last cluster of surveys by the main polling companies – Nielsen, Newspoll, Morgan, Essential and Galaxy – in early to mid May had shown Labor and the Coalition tied on 50 per cent of the two-party-preferred vote. In the fortnight after the announcement all five pollsters were out in the field again, and this time their findings were more diverse. Two-party-preferred support for the opposition varied between 47.5 per cent (Morgan’s face-to-face poll) and 53 per cent (Nielsen). Averaged, the six polls conducted by four pollsters gave the Coalition 49 per cent of the two-party-preferred vote, 1 per cent lower than a month earlier.

The bad news didn’t end there. Mr Abbott’s standing had fallen in both polls that regularly ask voters to rate party leaders. According to Nielsen, Mr Abbott’s approval rating was down 5 percentage points to 41 per cent, with over half of the respondents (51 per cent, up 6 points) now disapproving of his leadership. The percentage of “uncommitted” voters fell by 2 points to 8 per cent. In Newspoll, satisfaction with Mr Abbott had fallen five points to 37 per cent and dissatisfaction was up four points to 49 per cent, with the “uncommitted” group up slightly to 14 per cent.

There wasn’t much joy for the opposition in any of those figures (apart from the fact that Kevin Rudd’s approval ratings had also fallen). Given all the coverage of fears about asylum seekers over the past few months, this seems paradoxical. An issue that’s been described as “red hot” among “Howard’s battlers” (Josh Gordon in the Sunday Age) and “white hot” in the outer suburbs (David Bradbury, Labor member for Lindsay) wasn’t translating into increased support for the Coalition – in fact, quite the opposite.

Perhaps there was a delayed reaction. Three of the pollsters conducted a total of five polls over the subsequent fortnight, which turned out to be the last two weeks of Kevin Rudd’s prime ministership. According to Newspoll, dissatisfaction with Tony Abbott was steady and satisfaction had risen very slightly. Kevin Rudd was still ahead as preferred prime minister, but the gap had narrowed from 16 to 9 points. Two-party-preferred, Labor was leading the Coalition 52 to 48. Essential Research reported the same 52-to-48 split, and Morgan’s face-to-face poll had Labor ahead 53-to-47. There’s no comfort for the Coalition in those figures (and none for Mr Rudd, in the event).

Meanwhile – and this is why nervous Labor backbenchers like Mr Bradbury have been pushing for Julia Gillard to announce a harsher approach – polls were continuing to report concern about asylum seekers. Ever since the widely misinterpreted 2001 election campaign, fears about boat arrivals reported by pollsters have been assumed to influence the way people vote, especially in the outer suburbs. In fact, the evidence suggests that what got the Howard government over the line on that occasion were the terrorist attacks on 11 September 2001, and even with that unprecedented crisis it only managed to attract 51 per cent of the two-party-preferred vote.

What the polls over the past two months have shown very clearly is that when people say they favour tougher asylum seeker policies, or when they express approval of announcements like Mr Abbott’s on 27 May, that attitude doesn’t appear to be translating into how they will vote. Mr Bradbury and other MPs in marginal seats will certainly be receiving emails, letters and phone calls from concerned constituents, but the figures suggest the electoral impact of the issue will be mild to non-existent.

Despite the evidence from the polling, Julia Gillard responded to Mr Abbott’s failed announcement with one of her own – a hastily developed plan to process asylum seekers in one of the poorest countries in the region. Not enough polls have been taken since that announcement to assess whether she had more luck than her opponent, but this week’s Galaxy poll, just out, gives her and her advisers something to think about.

A few days after the prime minister’s announcement, Galaxy asked just over 1000 voters whether they approved or disapproved of “Julia Gillard getting tough on asylum seekers.” Sixty-three per cent approved, 26 per cent disapproved, and 11 per cent were uncommitted. And the impact on the government’s two-party-preferred vote? None whatsoever. Galaxy had Labor steady on 52 per cent of the two-party-party vote.

One other poll suggests a way forward, though the election is probably too close now for the government to change course again. In June this year Essential Research asked 1045 respondents to nominate what percentage of Australia’s immigration intake is made up of asylum seekers arriving by boat. Ten per cent said it was half or more, 15 per cent said about a quarter, 13 per cent said about one-tenth, and so on. In other words, on top of the 30 per cent who said “don’t know,” 38 per cent of respondents chose a wildly exaggerated figure and only a third were anywhere close to reality, which is between 1 and 3 per cent, depending on the year. The inflated figures were higher among people who said they’d be voting for the Coalition. This might be a good starting point for the government to change the way it talks about asylum seekers. •

Peter Browne is editor of Inside Story. This article first appeared in the Canberra Times.